“On rate spreads alone, USDJPY should be trading north of 136,” - TD Securities

The Japanese Yen tumbled across the board ahead of the weekend after show stopping employment and wage figures appeared to bait an already hawkish Federal Reserve (Fed) and shocked U.S. government bond yields back into life.

Japan’s Yen fell by around three quarters of a percent or more against all G10 counterparts on Friday after official data painted the U.S. labour market into a picture of rude health when revealing that the economy created more than twice as many jobs as were anticipated by economists for July.

Added to that the unemployment rate fell back to a multi-decade low last month while wage packets also grew faster than was anticipated when continuing to rise at an annualised pace of 5.2% in July.

“The implication is unambiguously USD positive. USDJPY is the key pair to watch given its linkage to the Fed's terminal rate,” says Mazen Issa, a senior FX strategist at TD Securities. 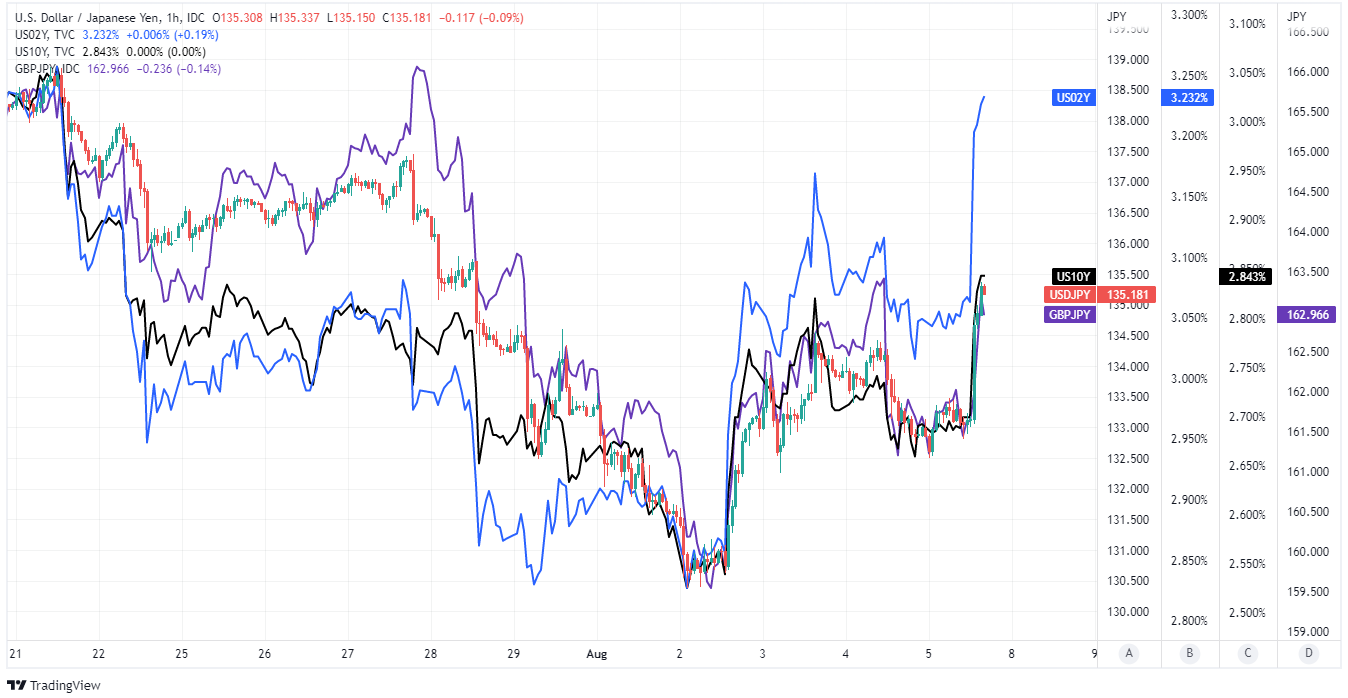 Above: USD/JPY shown at hourly intervals with 02-year and 10-year U.S. government bond yields and GBP/JPY.

The Japanese Yen had benefited more so than many other currencies as long-term U.S. government bond yields edged lower throughout late June and July and seemingly in response to widespread perceptions in the market of a deteriorating U.S. economic growth outlook.

Those perceptions appeared to be vindicated when official figures revealed a second consecutive contraction in U.S. GDP for the second quarter last week, marking the beginning of a technical recession, but July’s jobs figures made a mockery of this pessimism on Friday.

Dollar exchange rates rallied after the figures’ lifted U.S. government bond yields back in the direction of highs reached around the middle of June, which precipitated a fall by the Yen to new millennium lows that was only halted late July by recent market concerns about the U.S. economy.

“The short-JPY squeeze of the past two weeks has been violent. USDJPY corrected from 139 to 131 in the span of 10 days. We think that correction is overdone, though. The correction drew its energy from a move lower in Treasury yields, but lower Treasury yields won't resolve the yen's flows deficit,” says Greg Anderson, global head of FX strategy at BMO Capital markets.

The risk is now, for the Yen and other currencies, that financial markets wager on the Fed lifting its interest rate by another non-standard increment of 0.75% in September, which could feed the recovery in U.S. bond yields and lift the USD/JPY pair back in the direction of its July highs. 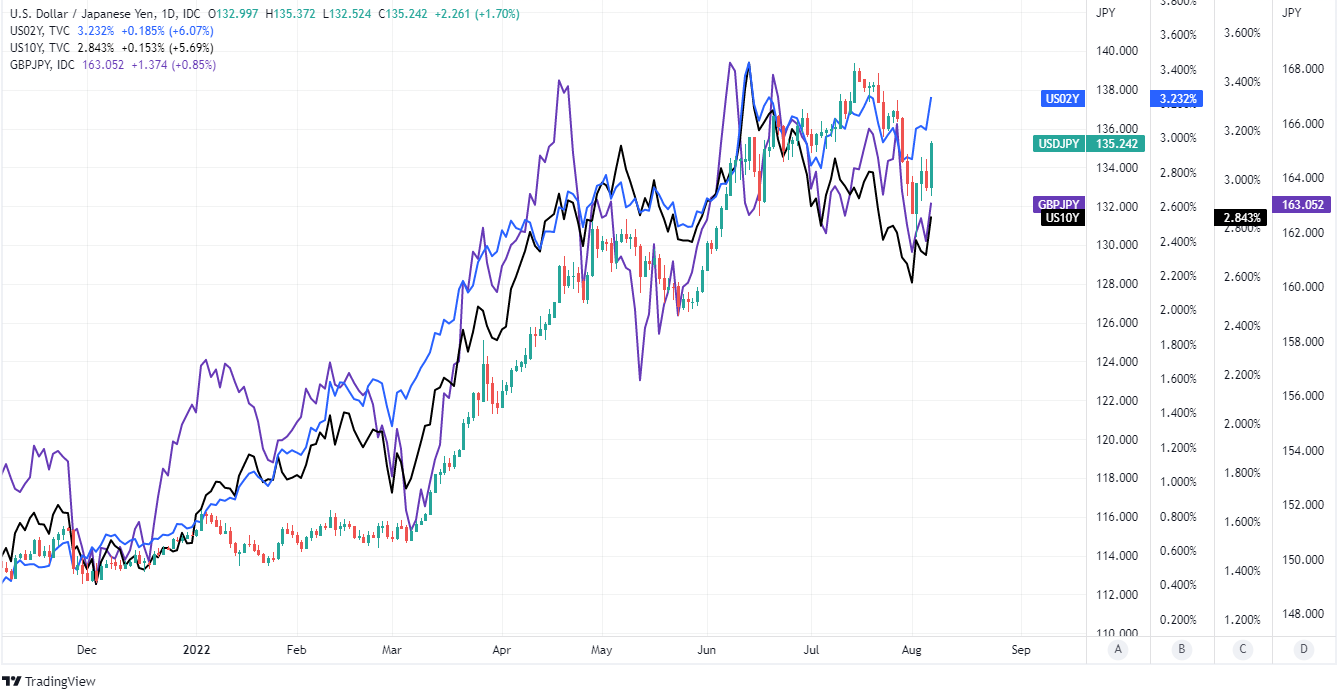 Above: USD/JPY shown at daily intervals with 02-year and 10-year U.S. government bond yields and GBP/JPY.

“It is important to state that there is no string connecting the variables; they are mostly connected via the beliefs of speculators rather than via the flows of Japanese real money investors, who generally hedge most of their offshore bond positions. And on that note, those bond investors are likely going to encounter a problem by the end of the year,” BMO’s Anderson said of the Yen and U.S. bond yields on Thursday.

“If the Fed hikes roughly 50bps more, the cost of a rolling 1M hedge will completely negate the yield advantage of a 10Y Treasury over a 10Y JGB. While some Japanese investors will choose to withdraw their hedged Treasury investments, others may choose to drop their FX hedges, which would cause forward brokers to buy USDJPY,” he added while forecasting USD/JPY to top out around the 139 level in three-months time.

A third consecutive 0.75% increase in the Fed Funds rate is a scenario that came close to being written off by the market after Chairman Jerome Powell said following July's decision that the Fed would be watching U.S. economic data closely for clues about the appropriate pace to lift rates going forward.

This was close to the height of financial market speculation about the perceived risks of a U.S. recession.

The Yen has been the most susceptible among major currencies to increases in U.S. bond yields and in part because the Bank of Japan (BoJ) has remained committed to keeping local bond yields low in order to support Japan’s recovery from the coronavirus crisis.