The Japanese Yen fell to a two decade low by the mid-week session as USD/JPY probed above a major level of long-term technical resistance around 2015 highs on the charts but could be at risk of deeper declines in the months ahead if the nascent strength in Dollar exchange rates persists.

Japan’s Yen slipped to its lowest against the U.S. Dollar since October 2002 on Wednesday, leading USD/JPY to rise above 126.00 for the first time in two decades and even as U.S.-Japan bond yield differentials signalled that a period of consolidation could now be in the pipeline.

The Yen reached new lows as U.S. exchange rates climbed broadly, continuing a recent trend that has seen the Japanese currency sustaining its heaviest losses during bouts of U.S. Dollar strength, although Wednesday’s rally may also have had a domestic driver too.

“Bank of Japan Governor Kuroda warned the central bank will continue with powerful monetary easing persistently to support a recovery from the pandemic. In contrast, the Fed is increasingly hawkish,” says Elias Haddad, a senior currency strategist at Commonwealth Bank of Australia. 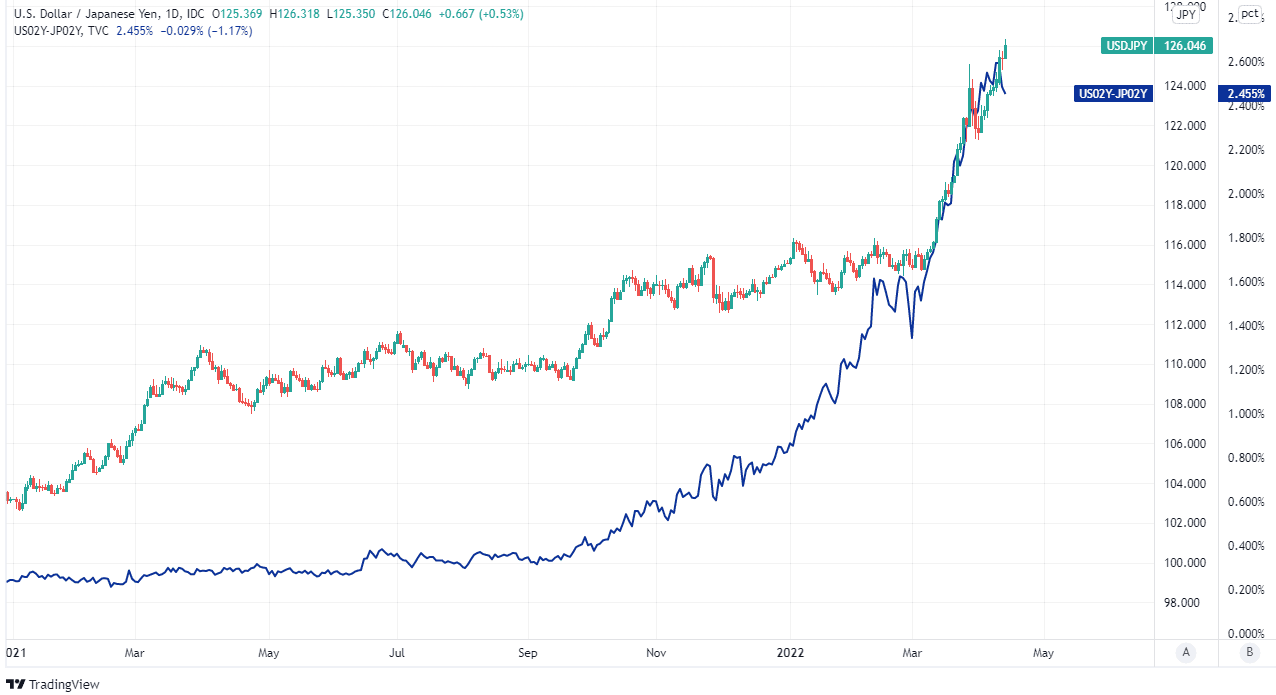 Above: USD/JPY shown at daily intervals alongside spread - or gap - between 02-year U.S. and Japanese government bond yields. Click image for closer inspection.

Bank of Japan Governor Haruhiko Kuroda told an annual meeting of trust banks that rising import costs and the resulting squeeze on incomes will be likely to hold back the Japanese economic recovery and so could necessitate a continuation of the BoJ’s stimulative monetary easing policies.

“In light of this economic and price situation, the Bank of Japan will continue to carry out the current strong monetary easing to firmly support economic activities in the process of recovery from infectious diseases, with a 2% "price stability target." We will aim for sustainable and stable realization,” Governor Kuroda said in part of the speech.

The BoJ’s monetary policy remains as highly expansionary as it has been at any other point history even as the Federal Reserve moves toward what is now widely expected to be its sharpest monetary tightening cycle for decades.

This has pressured others including the European Central Bank (ECB) to also take gradual steps toward a normalised monetary policy stance, although the BoJ has shown no signs of being inclined to budge from its position that current extraordinary levels of monetary stimulus remain necessary for the economy.

“Having seen 10-year spreads exceed 250bps for the first time since May 2019 we would expect USD/JPY to remain well supported,” says Jeremy Stretch, head of FX strategy at CIBC Capital Markets. 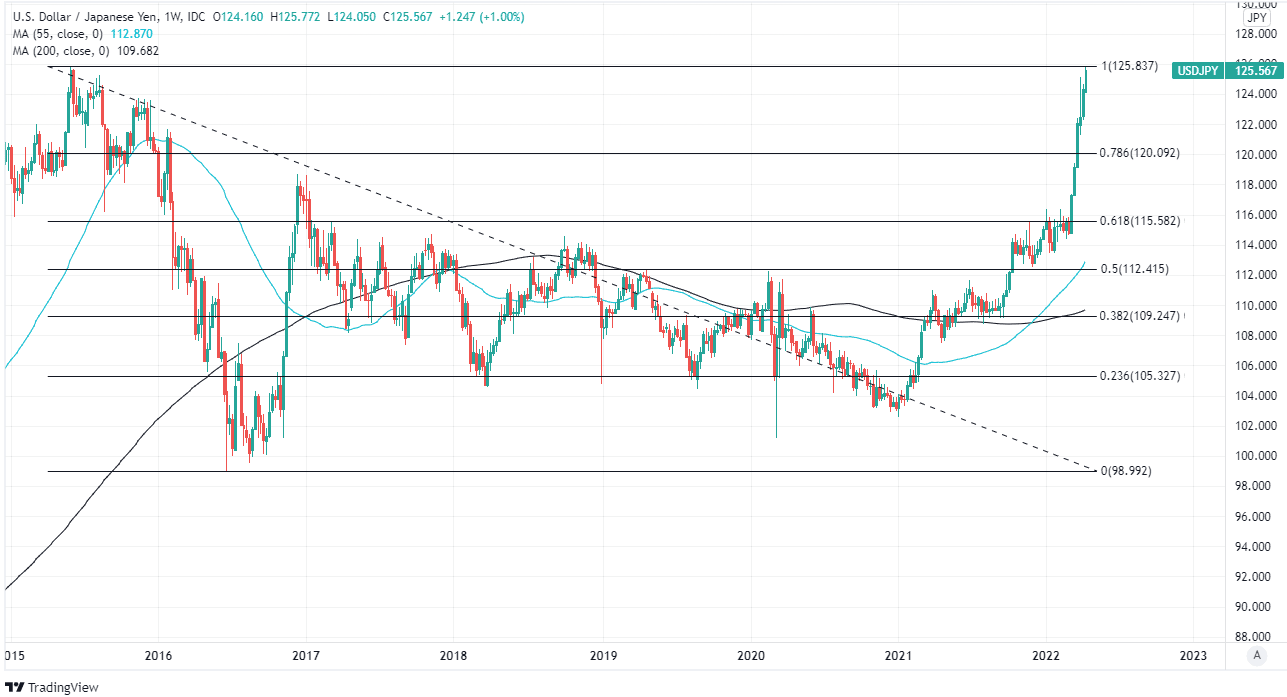 The growing chasm between Fed and BoJ policy stances has led to strong and broad upward pressure on the Dollar and since the early weeks of March, that pressure has culminated in a sharp rally higher by USD/JPY.

“One could argue that the events of the past three weeks have helped clarify that US rates are a more important driver for USDJPY than oil. While we acknowledge that may be the case, we are substantially more nervous about the durability of the USDJPY rally at this stage because it seems to be flying on one engine rather than two," writes Greg Anderson, global head of FX strategy at BMO Capital Markets, in a Monday research note.

“The rise in US bond yields that is happening in tandem with the move higher in USDJPY provides decent rhetorical support for USDJPY bulls. If there were an iron rod that connected them, the rate move would suggest a move to around 130 in USDJPY is warranted. However, there is no such mechanical attachment between the variables. There is only a somewhat fragile belief attachment,” Anderson also later said.

While it’s done little to restrain the Dollar so far, official data released on Tuesday showed the core rate of U.S. inflation ebbing on a month-on-month basis in March and in the process offered a possible early indication that domestic inflation pressures may have crested.

This same tentative ebb was also seen in the Personal Consumption Expenditures price index data for last month, which showed the Fed’s preferred measure of core inflation rising at a slower pace than it had in February. 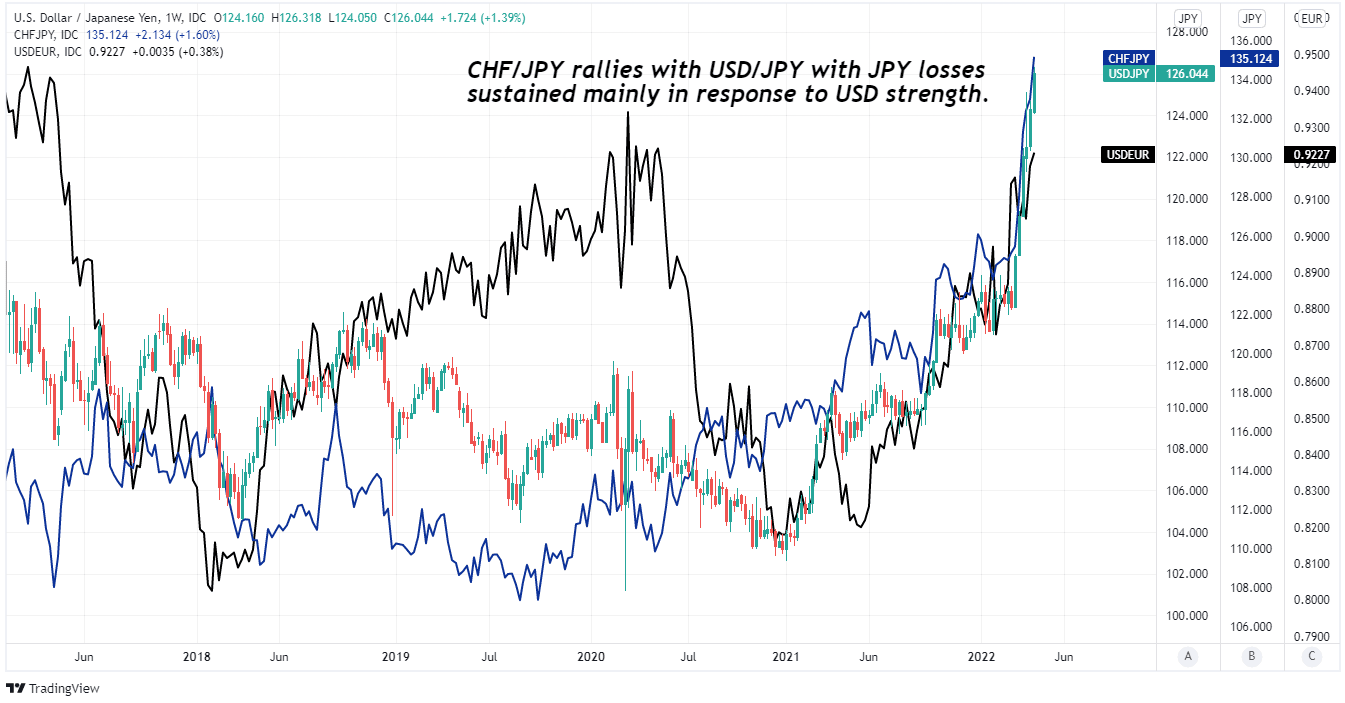 Above: USD/JPY shown at daily intervals alongside CHF/JPY and USD/EUR. Click image for closer inspection.

“I wouldn’t take a lot of signal from any one month of data, but I will be watching carefully for a continuation of this pattern,” Vice Chair of the Federal Reserve Lael Brainard told The Wall Street Journal on Tuesday.

While any easing of U.S. inflation pressures could eventually have a moderating impact on market expectations for Fed policy and appetite for the Dollar, it changes little about either of those in the here and now, which could mean that the Japanese Yen remains at risk of further declines in the short-term.

That might be especially likely if the ECB also continues with its steps toward a more normalised monetary policy, which were outlined in early March and around the same time that the ongoing rally in USD/JPY first got underway.

This coincidence could be the result of strength in the Dollar, Renminbi and other currencies as well as resilience in Sterling, all of which has led the Euro to remain under pressure in an overall sense even as the ECB clears a pathway toward a normalisation of its own monetary policy.

"We expect the ECB to announce, at its June meeting, an end to its asset purchases in September, with the first 25bp Deposit Rate hike coming in December," says George Buckley, chief UK and European economist at Nomura.