- Next stop could be April 2017 lows as bear extends

- Yen to be driven by risk trends

The Pound-to-Yen exchange rate is trading at 138.32 at the time of writing, down a third of a percent on the day as broad risk aversion increases safe-haven flows to the Yen, and the Pound continues its journey south on Brexit uncertainty.

From a technical perspective, it is now in an established downtrend which according to the old adage ‘the trend is your friend’ is more likely to extend than ‘bend’, thus we see more downside as the likelier path. 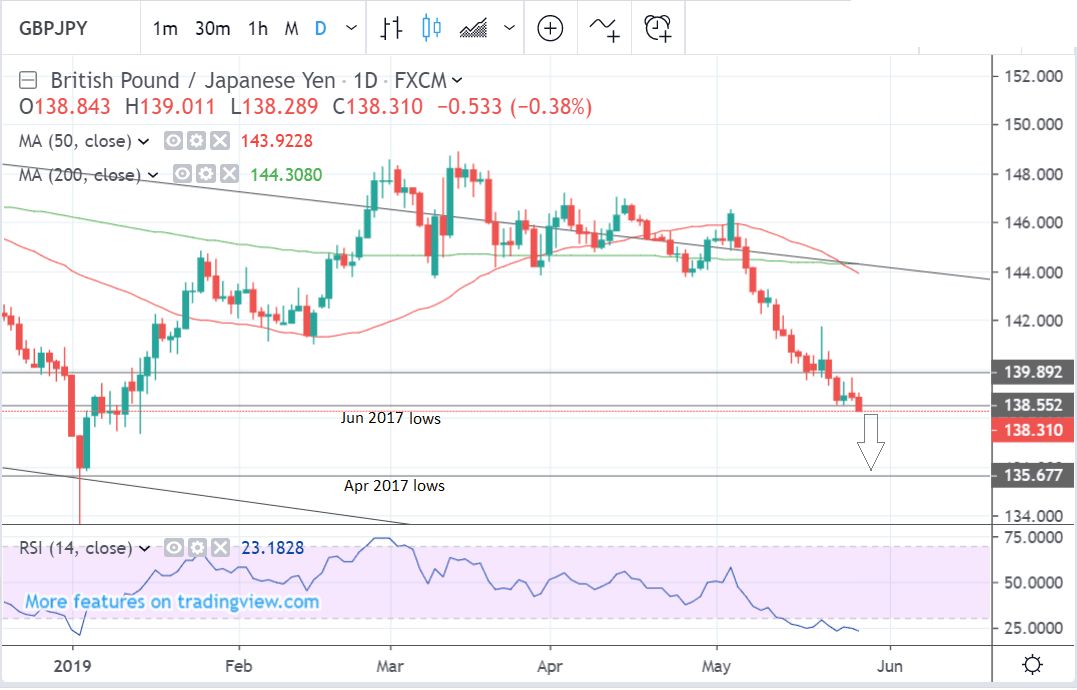 Another interim downside target is 137.50 which we cited in our previous report on the pair.

The one fly in the ointment of the bearish forecast continues to be the RSI indicator in the bottom panel which is registering ‘oversold’ after falling below 30 - a warning for traders not to open any more bearish bets. It indicates an increased chance that the pair could pullback from oversold levels.

Yet, so strong is the current downtrend that we expect more weakness. The RSI is a confirmatory indicator and it can remain oversold for long stretches of time whilst prices continue falling. The really bullish signal would come it was to exit oversold by rising back above 30, as this would be a sign to close bearish bets and open bullish bets.

The Japanese Yen: What to Watch this Week

From a fundamental perspective, the outlook for the Yen remains biased higher as its safe-haven credentials place it in an optimum position to benefit from ongoing trade tensions and the worsening outlook for global growth.

“We expect the U.S. to maintain trade pressure on China and we are not looking for any immediate resolution,” says Chris Turner, chief FX strategist at ING Bank.

At Citibank the base case scenario is for a cessation in ‘hostilities’ earmarked for the G20 meeting in late June (28-29), when Trump and Xi meet, however analysts also acknowledge that markets "appear to be increasingly leaning towards the possibility of a more protracted trade dispute with more US tariffs to come, therefore setting the stage for a more protracted risk aversion theme for Q3’2019 likely to favour safe haven currencies such as JPY, CHF, and Gold.”

The main domestic events which could impact the Yen are Tokyo Core CPI for May, out on Friday, which always precedes nationwide CPI, retail sales and industrial production, also both out on Friday.

Governor Kuroda is scheduled to speak on Wednesday, May 29, and has already spoken on Monday, when he highlighted global risks from trade wars and Brexit but didn’t mention monetary policy. His comments, however, rarely move markets as they generally reiterate the same mantra of moderate growth combined with subdued inflation.

Tokyo CPI is forecast to show 1.2% rise in inflation from 1.3% previously, which is still well below the Bank of Japan’s (BOJ) 2.0% target. A lower-than-expected result has a risk of weighing on the Yen since inflation dictates monetary policy which impacts on currencies, and when inflation falls it spurs central banks to ease policy which is generally negative for the local currency.