- Brexit talks to drive GBP as risk appetite in focus for JPY.

The GBP/JPY was trading around 141.98 Tuesday after having declined half a percent thus far this week, although further losses could be just around the corner given technical signals coming from the charts.

Declines were mainly due a strengthening of the Yen after President Donald Trump threatened another tariff attack on China last Friday, prompting fears for the global growth outlook and demand for the safe-haven Japanese currency.

Our technical forecast turned bearish last and remains so now. GBP/JPY has established a sequence of lower peaks and troughs ever since the April high, which suggests the establishment of a short-term downtrend. 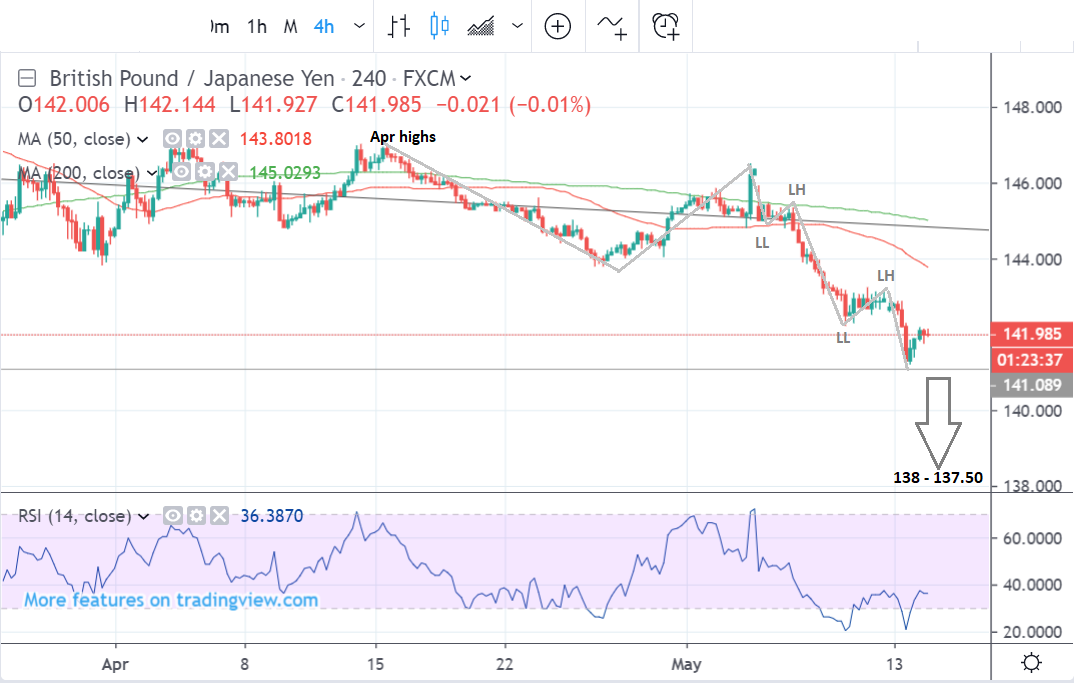 Above: GBP/JPY shown at 4-hour intervals.

This should mean a bias toward more downside, although a further meaningful declines first require a break below the 141.20 February low. Such a break would then probably lead to a continuation down to the 137.50-to-138.00 area, which should be achievable within a 1-3 week timeframe. 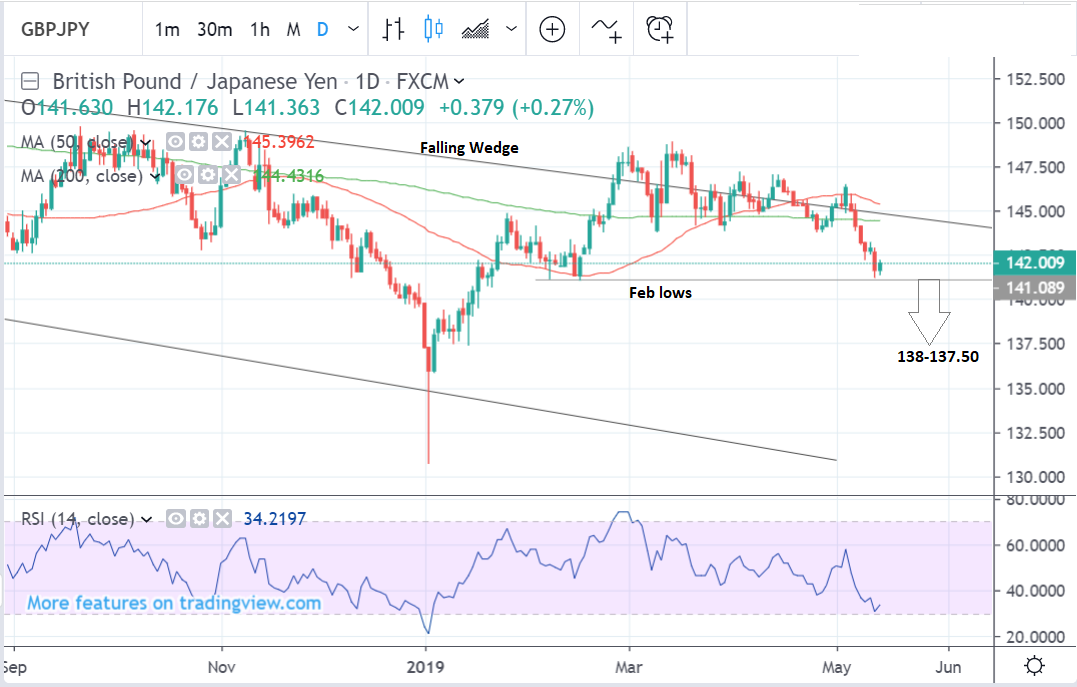 Above: GBP/JPY shown at daily intervals.

The pair had been trading at the upper border of a falling wedge pattern and our expectation was that the exchange rate would probably break higher, given this is the usual outcome of such a pattern.

However, and despite efforts, the attempted breakout failed and the exchange rate is now falling within the wedge pattern again. 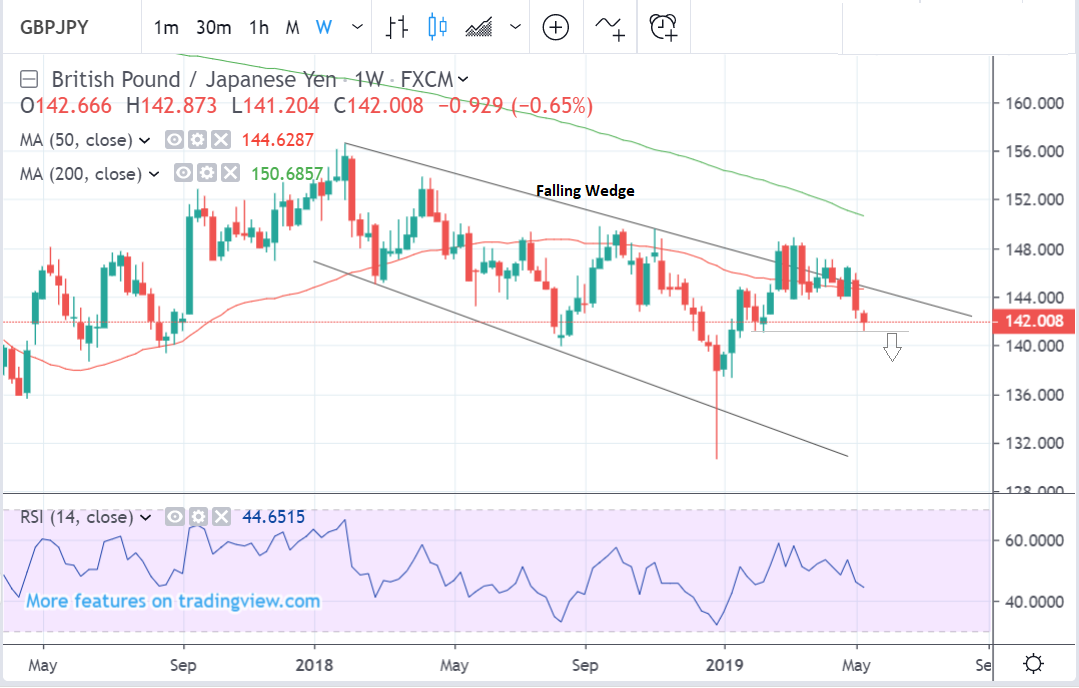 Above: GBP/JPY shown at weekly intervals.

The main factor impacting on the Yen this week will continue to be investor risk appetite, which has hit rock-bottom recently given the escalating trade war between China and U.S.

The Yen is a safe-haven currency which means it gains when investors grow fearful and need somewhere safe to park their capital. This explains why it was one of the few currencies rising as the White House went on the warpath last week and on Monday again.

Both superpowers are now in the process of implementing higher tariffs on goods imported into each other's countries. The sudden breakdown of earlier talks took the markets by surprise and the Yen rose strongly as a result.

There seems no straightforward solution to the trade war and it is unlikely to be resolved quickly since the positions of the two camps are still too wide apart to be easily bridged.

China wants an end to all tariffs on its products and softer legislation preventing intellectual property theft than that which it is said to have agreed to in the draft trade deal. The U.S. says it's quite happy with tariffs, which appear to be having the desired effect of reducing the U.S. trade deficit.

Although there are parts of the economy which stand to lose from higher Chinese tariffs on U.S. exports, such as soybean growers, who used to be exempted from tariffs but will not be, President Trump has promised to distribute some of the tariff revenue to those hit hardest by the trade war. This suggests a more dug in position than previously expected when the market appeared to have a rather panglossian view of the outcome of talks.

On the economic data front, the only major release on the horizon for the Yen is the Tertiary Activity Index in April, which is seen showing a 0.1% rise on Friday at 00.30 BST. The activity index is a broad economic sentiment index. If it rises as much as expected it would represent a strong gain from the -0.6% previously.

The main economic release out for the Pound this week is March jobs data. The UK labour market has been resilient in the face of political and economic uncertainty of late and if that idea is reinforced again this week then the Pound might benefit.

A strong labour market can mean rising wages, increased inflation and higher interest rates further down the line, which could then lead to a stronger Pound because currencies tend to rise and fall with interest rates.

A rise in support for Nigel Farage’s Brexit Party, which is leading in the polls with 34% of the electorate ahead of the May 23rd vote, may mean it's less likely Labour and the Conservatives will strike a deal as the pressure on the Conservatives to pursue a 'clean break' Brexit is growing.

In an interview with the Guardian over the weekend, the leading Labour negotiator Sir Keir Starmer said it was increasingly likely that Labour would only back a deal that provided for a second referendum on EU membership. Starmer said there was a huge segment of Labour parliamentarians that would only consider voting through a deal if a second vote was provided for, therefore he believes it would be futile to agree to any deal that does not provide for one.

The Conservatives would almost certainly vote against any deal that does contain a provision for a second vote.

We expect the death of talks will be announced within days.

The prospect of May departing and a general election occurring over coming months therefore remains high, creating the kind of uncertainty that would be expected to keep Sterling under pressure.