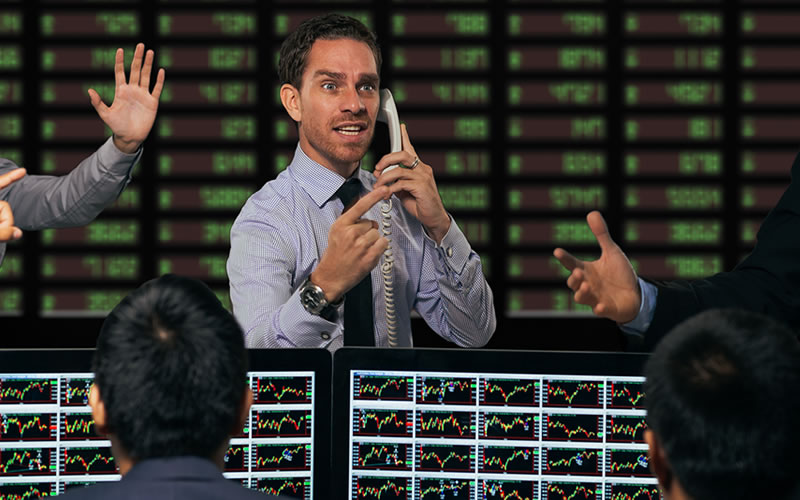 GBP/USD is showing signs of topping after starting a sharp decline which has seen it fall below the key 1.40 level overnight.

The Pound-to-Dollar exchange rate, also known as 'Cable' in the business, is breaking down after rallying up steeply through most of January.

After peaking at 1.4346 on January 25 the exchange rate rolled over and has been on the decline pretty much since then - it is currently trading at 1.4041 but had been seen as low as 1.3981 earlier in the day.

The reason behind the plunge is mainly the US Dollar, which, as we have already outlined in an article here, has gained due to a change in medium and long-term inflation expectations.

Previously experts thought inflation would remain subdued for quite a long time - a 'new normal' - but now they see it rising more, and as it rises it will prompt the US central bank, the Federal Reserve to raise interest rates.

Higher interest rates drive up currencies by increasing inflows of foreign capital, drawn by the promise of higher returns, so higher inflation eventually translates into a stronger Dollar.

If you hear analysts and commentators on Bloomberg and CNBC talking about "Treasury yields rising", then in a roundabout way they are referring to inflation expectations rising, since the 'yield' is a measure of compensation a bondholder gets for inflation erosion.

From a technical perspective, the question is how low can we go?

There is some evidence already building that the pull-back could go deeper than many may be expecting.

For starters, Cable has touched several mayor levels on the chart which historically are associated with corrections and even complete reversals in the trend.

The first of these is the 200-week moving average sitting just above the Jan 25 peak at 1.4400, which I drew attention to as a ceiling likely to cap gains in my week-ahead forecast. 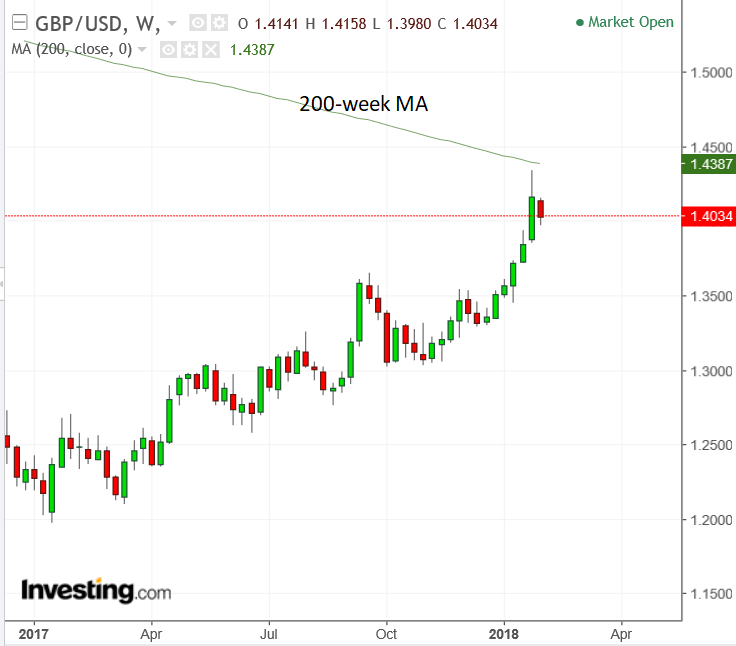 Often when prices touch or come near to touching large moving averages such as the 50 or 200 they are apt to stall, pull-back or even completely reverse.

Thus the confrontation with the 200-week did not harbinger well for the exchange rate, and as expected it has retreated.

The next level suggesting a deep pull-back is on the cards is the midpoint of the 2014 long-term decline at 1.4309, which has a similar repellent effect on prices as the 200-MA mentioned above.

"GBP/USD last week reached the 50% retracement of 1.4345 of the move down from the 2014 peak and directly above here lies the 200 weeks moving average at 1.4399," says Commerzbank analyst Karen Jones. 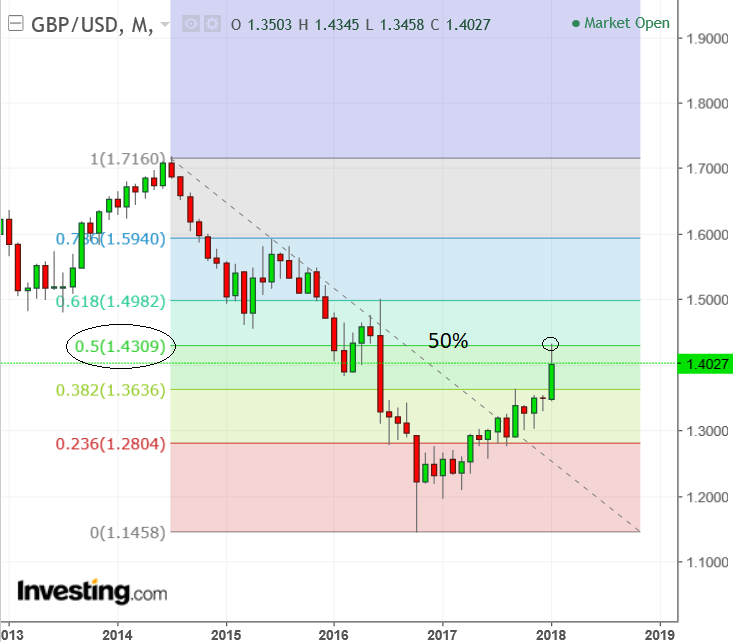 She notes further signs the tide may be turning, saying the exchnage rate has "eroded the accelerated uptrend" (see below) and, drawing on a technical indicator called the TD Sequential, that it is topping after reaching an 'overextended' extreme reading of 13, signaling the possibility of a correction or reversal in the uptrend. 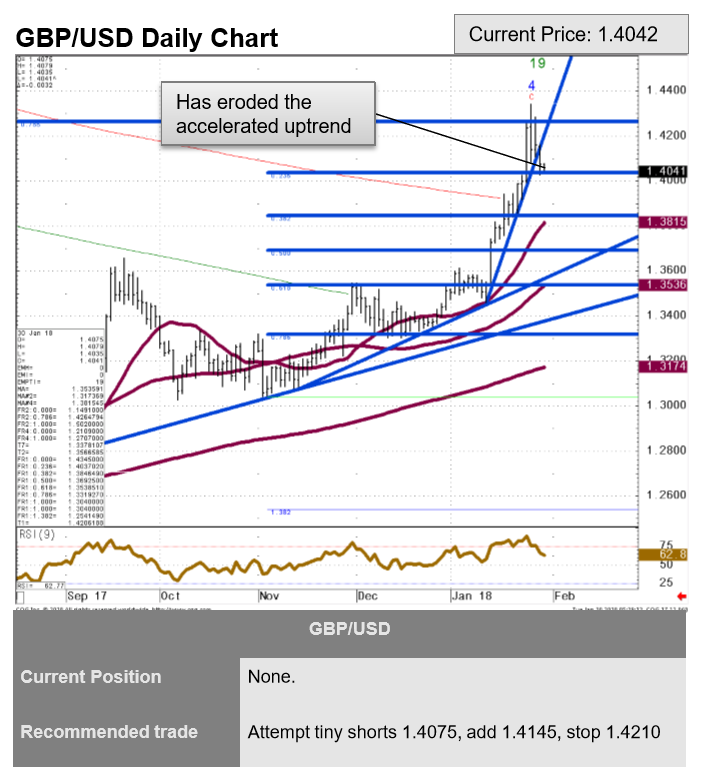 "We have a number of 13 counts on the daily and weekly charts, we believe the risk of failure here to now be high, the accelerated uptrend has been eroded and the 23.6% retracement at 1.4037 is exposed. This guards the mid-January high at 1.3942 and the 1.3658 September peak," she concludes.

'Convinced' there will be a deeper pull-back to as low as 1.37-38 is Lloyds Commercial Banking Cross Asset Strategist Robin Wilkins.

"Prices are sliding through 1.4025 support adding conviction to our short-term charts looking for a broader pullback. 1.3880 to 1.3715 is the main daily trend support region, which we expect to hold for now, while a move through there would confirm a more significant top did develop at 1.4345," says Wilkins.

Yet longer-term the analyst remains bullish seeing an eventual 'mean reversion' back up to 1.50-60, albeit with a high chance of pull-backs "from Brexit risk" in between.

There are major risk events on the horizon for the Dollar from a fundamental perspective in the form of Donald Trump's State of the Union address, scheduled for Tuesday (today).

The president is expected to 'retrumpet' (excuse the pun) his call for a 1 trillion Dollar infrastructure investment drive which could get markets including the Dollar lubricated for more upside, at least according to veteran of the FX theatre, Marshall Gittler, broker ACLS Global's chief strategist.

"According to the New York Times, Trump will call on Congress to spend at least $1tn on various infrastructure projects. We’ve known about that idea for a long time, but it may be that repeating it in the speech is seen as making it more likely to be realized," says Gittler.

From our own perspective, we see the exchange rate meeting substantial support at 1.3940 from the R3 monthly pivot, which is a level traders use to assess the trend, and which operates in many ways like a moving average in its support and resistance properties-  in this case for R3 in the mode of support.

A break below 1.3910 will bring real weakness as it will indicate R3 has been broken.

The current structure of the market supports the possibility that the pair is still in a pull-back.

The move down from the Jan 25 peak has unfolded in 3 clear waves, in a classic ABC corrective pattern, which now looks close to completion.

Once finished, the uptrend would be expected to resume, taking the exchange rate back up to the 1.43 highs again, however, if the market breaks below the C-wave lows before then, the ABC will be invalidated, increasing the possibility the pair may be starting a deeper down trending move. 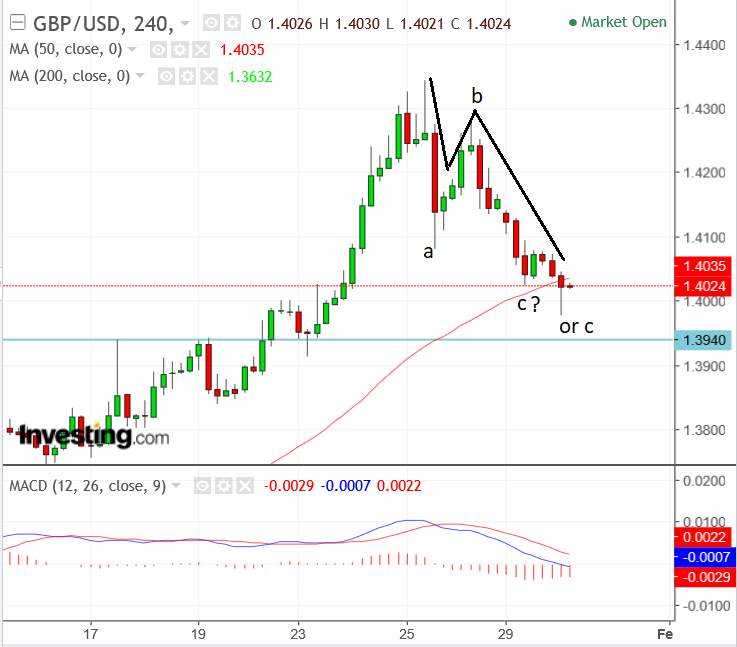 This may even have already happened as can be seen on the chart above of the four-hour time scale, in which we offer two alternatives for where wave C might have ended. The first possibility would suggest the C-wave lows have already been breached and the pair may be starting a new sequence of lower highs and lows commensurate with a downtrend - the alternative for C not.

Overall, 1.3910 is the key line in the sand for us, in terms of the trend, with a break below ushering in a stronger bullish case to a target down at 1.3840 initially.