U.S. inflation data surprised the market this week by coming in cooler than expected, triggering a rally in stocks and a decline in the U.S. Dollar, but analysts at Nordea Bank say this is not the beginning of a Dollar downtrend.

In fact analysts at the Scandinavian lender and investment bank expect the Euro to depreciate to well below parity over coming weeks as U.S. economic outperformance outshines those of European economies where recession is expected to take hold.

The Pound is also set to depreciate to the extent the Pound to Dollar exchange rate (GBP/USD) ends 2022 below 1.20.

"The July inflation surprise, whereby US inflation rose less than expected, seems to be an appetiser of what will eventually come. But we believe we are far from a Fed pivot to dovish policy and thus not yet at the peak for the USD," says Jan von Gerich, Chief Analyst at Nordea Markets.

U.S. CPI inflation was described by some analysts as a game changer having risen 8.5% in the year to July, which is below June's 9.1% and the consensus expectation for a reading of 8.7%.

The July month-on-month change was a flat 0%.

Some currency analysts responded to the data saying signs of a turnaround in U.S. inflation could signal the peak in expectations for the number and scale of Federal Reserve rate hikes required to cool domestic inflation.

This is in turn supportive of global investor sentiment, which aided the likes of the Euro and Pound relative to the Dollar.

"The winners and losers in the G10 FX sphere continue to be determined by the Fed’s hikes. When the Fed reaches peak hawkishness we are bound to see the weaker links of G10 - such as JPY - recover some of their losses, while the USD should pare back some of the gains," says von Gerich.

Nevertheless, Nordea Markets remind readers that the Fed will still 'out hike' other central banks.

"The global economy continues to lose momentum, but central banks will concentrate on their efforts to rein in inflation. Long yields will rebound to higher levels, while the EUR/USD has more downside left," says von Gerich.

Economists at Nordea also believe "the US economy is much stronger than many seem to think". 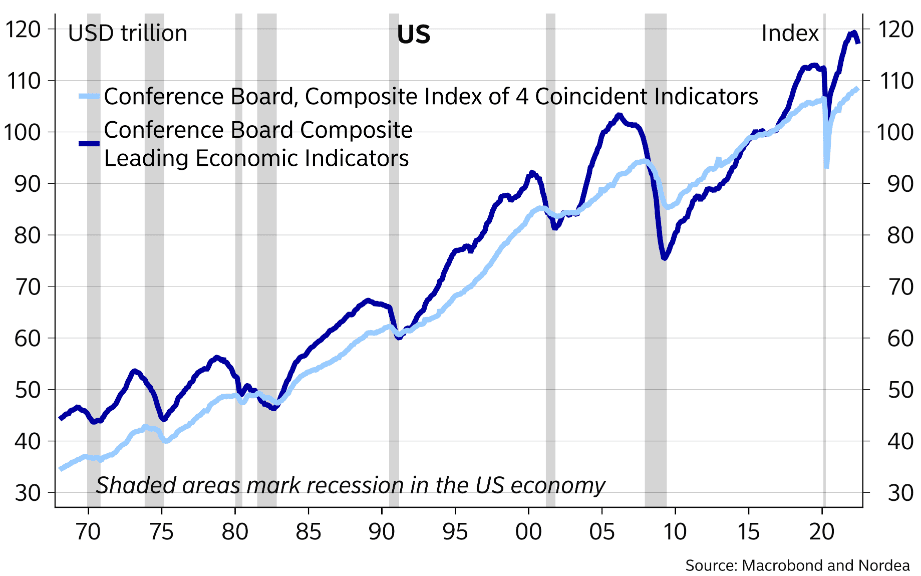 Above: The case for a US recession still rather weak based on economic data" - Nordea.

As such they expect the Fed will deliver 50bp hikes in September and November, followed by 25bp in December.

The ECB is expected to hike by 50bp in September and October before moderating to a 25bp rate hike in December.

The U.S. 10-year Treasury yield is meanwhile expected to reach 4% next year, "while the German 10-year yield will have to settle for 2%".

"We are quite worried about the outlook especially for Europe, which could suffer much more from high energy prices and a shortage of natural gas and enter recession in the second half of the year," says von Genrich, adding:

"We do not think the US economy is on the brink of recession, but the very limited amount of spare capacity implies that growth will continue to slow." 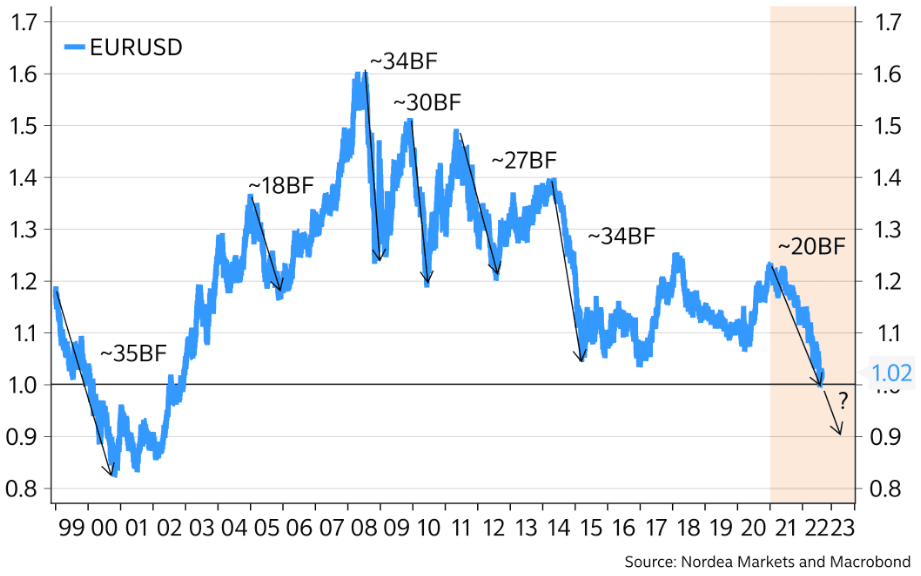 Above: "History suggests the EUR/USD could still fall further" - Nordea.

Furthermore, a litany of headaches could continue to keep markets nervous, creating the backdrop for further Dollar gains as investors seek out safety.

"It is clear that the global economy is losing momentum. Given the current headwinds, including little spare capacity, high energy prices and a war in Europe, continued Covid uncertainty and weakening real estate sector in China and elevated inflation, it is virtually unavoidable for the economy to survive unscathed. Further, amidst the current inflation problem, central banks are actively trying to hit the brakes in order to bring inflation down," says von Gerich.

EUR/USD is forecast by Nordea to fall below parity to bottom at around 0.97 at the turn of the year.

The GBP/USD exchange rate is meanwhile forecast to fall below 1.20 and end the year at 1.18.