The Pound-to-Dollar exchange rate (GBP/USD) was on the verge of breaking through two-year lows at the 1.35 level in mid-week trade before tentative buying interest returned.

However, given the fundamental and technical backdrop further losses are being forecast by foreign exchange analysts we follow. 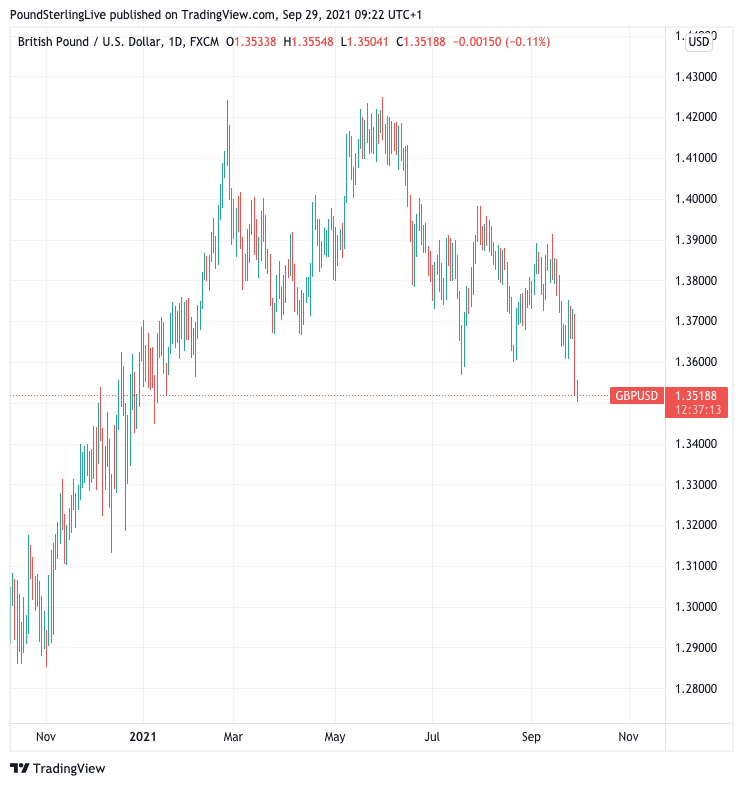 The exchange rate fell to a two-year low on Wednesday morning at 1.3504 as the British Pound was brutally punished by foreign exchange market traders amidst fears that the UK would suffer the most from the global energy crisis.

UK inflation is expected to surge and the Bank of England looks set to raise interest rates in response, but growth is expected to take a hit leading to a view amongst investors that stagflation might beckon.

Analyst Jordan Rochester at Nomura says the British Pound is caught "in an inflation meltdown".

"GBP is losing its inflation credibility," says Rochester, "It’s not much of a surprise that we’ve seen extreme price action, gas prices are moving higher at a rapid pace, so why not in FX too?"

"Failure here would introduce scope to the 200-week moving average at 1.3160," says Jones. 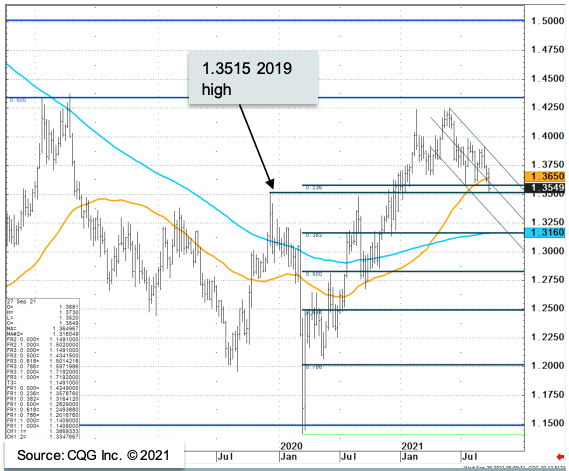 Surging bond yields and falling markets are telling us that investors are fearful that rising inflation will become enduring and that central banks will inevitably have to raise interest rates.

The sweet spot for global markets that has seen rising growth and low inflation could therefore be over, however some analysts we follow say this spell of investor unease will prove to be temporary.

This observation applies to the UK and the Pound in particular where rising inflation linked to an energy crisis looks more acute than in Europe, the U.S. and other nations.

Stock markets sank and the Dollar proved to be the main beneficiary.

Inflation risks becoming structural when the consumers and businesses react to persistently high inflation caused by the kind of supply shocks we are currently seeing.

Fears of such a development were expressed by the Bank of England's Governor Andrew Bailey in a speech delivered this week where he said inflation could become self sustaining and therefore require central bank intervention.

"Bottlenecks, hiring difficulties, and other constraints could again prove to be greater and more enduring than anticipated, posing upside risks to inflation. If sustained higher inflation were to become a serious concern, we would certainly respond and use our tools to ensure that inflation runs at levels that are consistent with our goal."

Van der Jeugt says central banks would eventually be obliged to tighten the screws on monetary policy despite the inflation shock being initially supply-side in nature.

Michael Brown, Senior Market Analyst at CaxtonFX says the bond market's behaviour "is a classic sign of the market pricing in tighter monetary policy, both through tapering and, eventually, rate hikes".

But Brown says he remains of the view that the surge in inflation will ultimately still prove temporary in nature, a view echoed by Federal Reserve Chairman Jerome Powell.

Investors were naturally drawn to Powell's comments on inflation's ability to become more structural, understandably as they were made on a day of falling stock markets and surging bond yields.

"These effects have been larger and longer lasting than anticipated, but they will abate, and as they do, inflation is expected to drop back toward our longer-run 2 percent goal."

If this view is indeed proven correct then the greater the likelihood that the current market spasm is temporary.