The Pound-to-Dollar exchange rate entered the new week down sharply from April highs after being turned over by bad global market weather on Friday, but would be likely to sustain a recovery if given the all clear by the Bank of England on Thursday.

Sterling suffered its largest intraday loss since late February at the end of last week after a spike in U.S. bond yields appeared to pull a rug from under many currencies, although month-end routines for investors and the final day of trading in Japan and China before a series of public holidays may also have been at play.

U.S. yields were in renewed decline by the weekend close and if that remains the case over the coming days the Pound-Dollar rate might be likely to find its lost footing above the nearby 1.38 handle, although it might need an all clear incentive from the Bank of England (BoE) before it's able to garner meaningful recovery momentum.

"Near term dips are expected to be shallow and an upside bias is preserved above the uptrend at 1.3714. A close above 1.4018 will target 1.4238/45," says Karen Jones, head of technical analysis for currencies, commodities and bonds at Commerzbank.

Thursday's BoE event is the highlight of the week for Sterling but before then global market conditions and notably, price action in the U.S. bond market will dictate the mood of investors and direction of Dollar exchange rates. 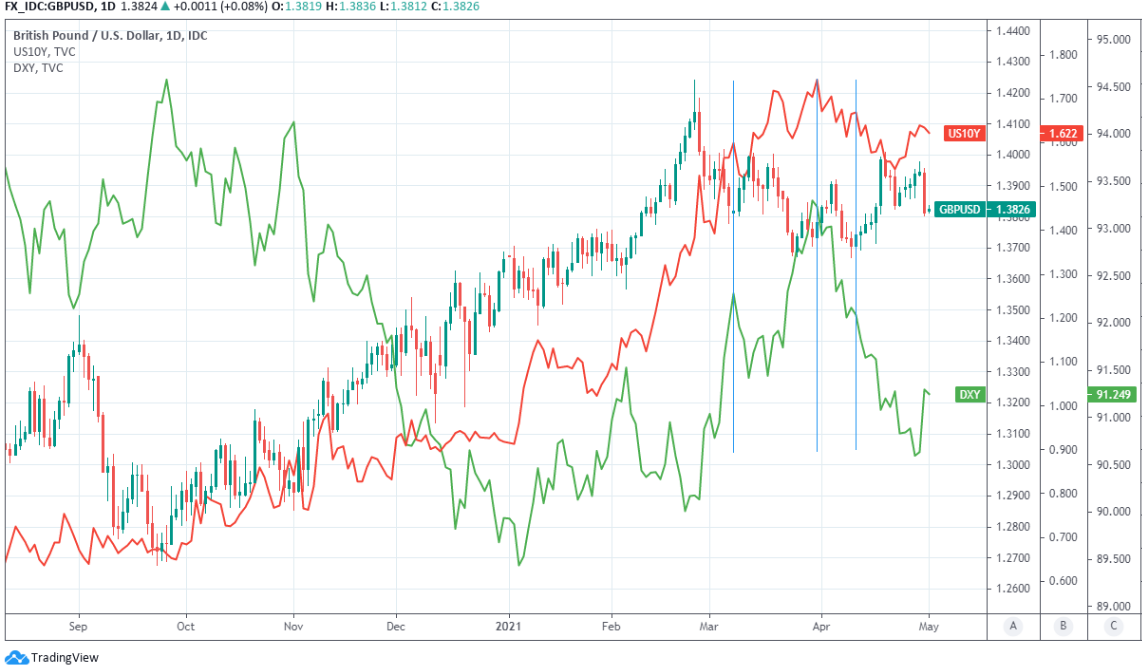 “At the top of the market’s agenda is the question over the Fed’s commitment to super-dovish policy amidst increasing signs of the US economy gaining momentum,” says Chris Turner, global head of markets and regional head of research at ING.

Turner and ING colleagues have warned the Dollar could make further attempts at recovery over the coming days if yields rise anew or investors prove reluctant to let go of it ahead of the May non-farm payrolls.

“Mester could repeat Kaplan’s call for a conversation about tapering. The Fed’s dovish core won’t have any of it, but potentially better US data and more hawkish regional Fedspeak leave the Dollar Index positioned for a short term bounce this week,” says Richard Franulovich, head of FX strategy at Westpac.

Kaplan, also President of the Federal Reserve Bank of Dallas, advocated an imminent end to the Fed’s $120BN per month quantitative easing programme and an increase in interest rates for this summer, although he will not be a voting member of the FOMC again until 2023.

This was only days after the Fed appeared to convince investors and the wider market that there’s little chance of the bank being inclined to even discuss changes to its current monetary policy settings before year-end, which had weighed on the Dollar and lifted GBP/USD above 1.39 for the first time in April.

“Cable remains on a modest upward trend with three straight weekly gains with an eye to test the 1.40 level in the coming days if the current trajectory holds,” says Juan Manuel Herrera, a strategist at Scotiabank.

U.S. data due this week including Friday's 13:30 job report will be of greater significance than otherwise given the Dollar's ongoing sensitivity to changes in yields but when combined with the strength of earlier figures, this could become a double-edged sword. 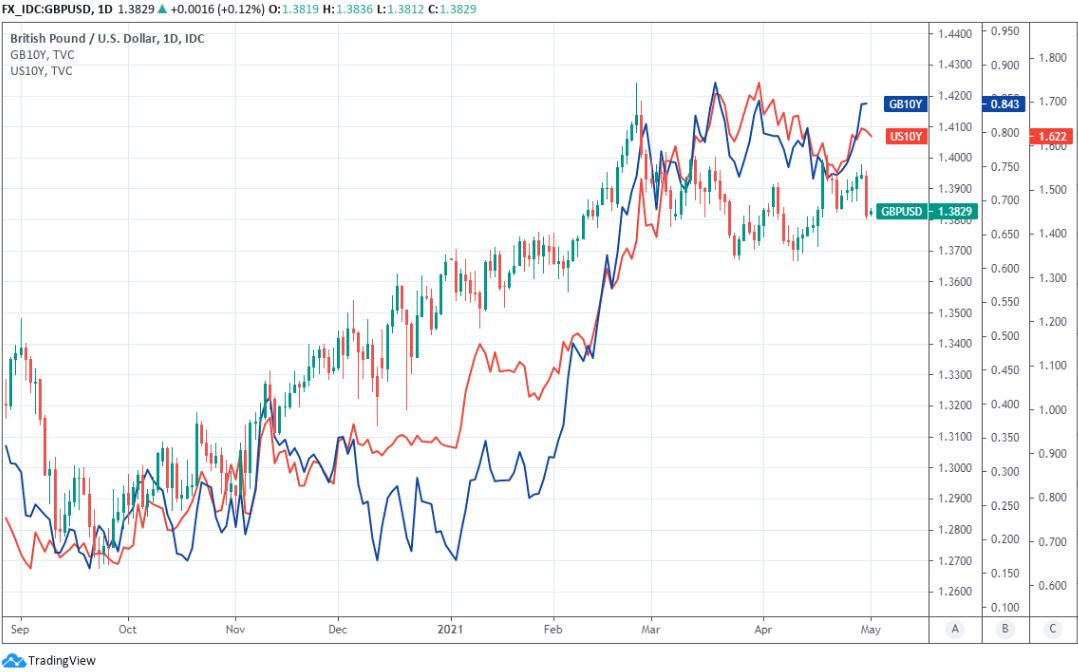 Consensus looks for the U.S. to have created or recovered from the coronavirus some 975k jobs last month, which is even more than the 915k blockbuster seen in March and may mean the latest figures are apt to disappoint.

“We expect the USD to trend lower because of the improving global economic outlook. Vaccination has ramped up in many developed countries. At the same time, strong US economic momentum is a positive signal for the global economy via higher US imports,” says Kim Mundy, a currency strategist at Commonwealth Bank of Australia.

For Sterling however, everything depends on the outcome of Thursday’s monetary policy decision from the BoE, which is widely expected to leave Bank Rate unchanged at 0.10% and the £895bn target for its quantitative easing programme in place.

“The markets know tapering is coming. Even though the taper timing is not significant over the medium-term, acting next week would probably see GBP outperformance to commence again,” says Derek Halpenny, head of research, global markets EMEA and international securities at MUFG. 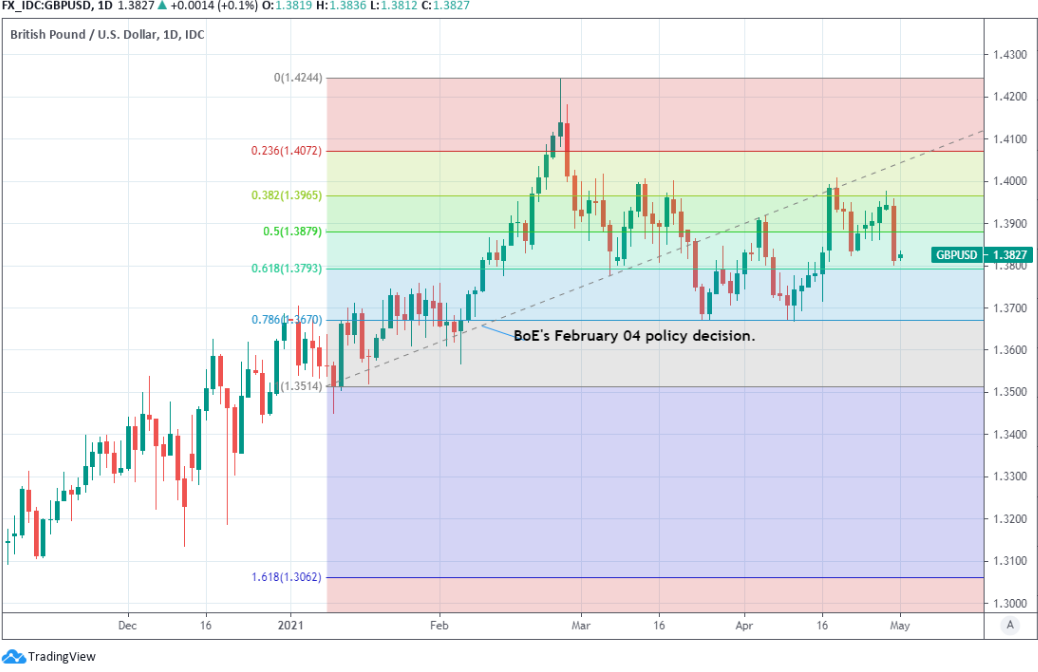 Above: GBP/USD at daily intervals with Fibonacci retracements of key January bid.

Many analysts and economists are also looking for upgrades to the BoE's growth and inflation forecasts, although there's less of a consensus over what it will or won’t say about the pace at which its QE programme is completed.

Any announcement suggesting that bond purchases will end sooner rather than later would likely be positive for the Pound because so far only the Bank of Canada has taken that step.

With the UK having made some of the fastest progress on vaccinations in the world and since taking tentative steps toward reopening supposedly non-essential sectors, expectations for the economy have picked up of late.

But the Pound-Dollar rate, despite having done well historically in any given April month, has not yet been able to return to peaks above 1.42 seen in late February and within weeks of the BoE's last meeting.

The BoE decision is out alongside the latest round of forecasts at 12:00 PM on Thursday.