Sterling was the best performing major currency on Monday with its advance led by the Pound-Dollar rate, which rose almost half a percent to overcome its 55-day average at 1.3832 before looking higher toward 1.39.

The Pound outperformed as the UK prepared to take its first steps in reopening, which begins in earnest from April 12, while the Dollar was lower against all majors except the Swiss Franc, Swedish Krona and Norwegian Krone.

Dollar losses were greatest against commodity currencies like the Australian and New Zealand Dollars.

"Beyond the next few weeks we think the main opportunity in G10 FX markets will be positioning for the likely recovery in European activity," says Zach Pandl, global co-head of foreign exchange strategy at Goldman Sachs. "We are keeping our 3m and 12m EUR/USD forecasts unchanged at 1.21 and 1.28, respectively. Clear evidence that Europe’s covid situation is getting under control would likely warrant fresh USD short recommendations."

Monday's price action marks a positive start to the week for risk currencies though one which comes amid public holidays in North America and Europe owing to the Easter break as well as a public holiday in China for the Qingming Festival, a traditional Han Chinese commemoration of ancestors.

The Pound appeared to be decisively reversing its March decline at the beginning of a quiet week for economic calendars on both sides of the Atlantic, with only minutes from the latest Federal Reserve monetary policy meeting out on Wednesday at 19:00 and the quarterly bulletin of the Bank of England at 12:00 on Friday to command attention.

Tuesday will see European investors respond to the latest March non-farm payrolls report, which blew economists' expectations out of the water but came hard on the heels of International Monetary Fund (IMF) data showing the Dollar's share of the global foreign exchange reserve basket hitting its lowest since 1995 in the final quarter of 2020.

If the sell-the-Dollar mood endures through the European morning on Tuesday it could be a good omen for Sterling through the week ahead. 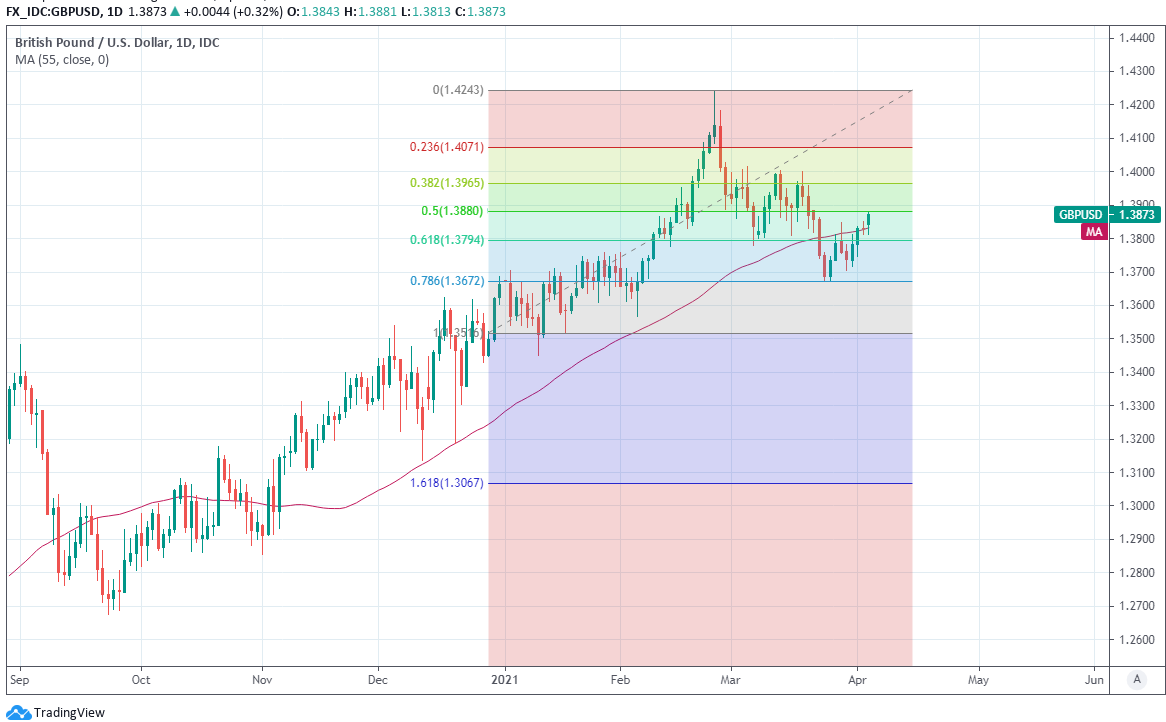 Above: Pound-to-Dollar rate shown at daily intervals with Fibonacci retracements of January rally and 55-day average.

"The cross will stay offered below the short term downtrend line at 1.3856. Above it sit the March highs at 1.4003/18. Key resistance is seen at 1.4018, the March high," says Axel Rudolph, a senior technical analyst at Commerzbank.

The Dollar for its part has risen against all major currencies barring the Canadian Dollar and Norwegian Krone in the last month as investors responded to a ramped up vaccination programme that looks to have all American adults offered an initial shot by the end of May.

Vaccine progress and increased U.S. financial support for households is a boon for the U.S. and global economies as well as the Dollar.

"We do not believe this is the start of a USD bull market, and USD downside is likely to resume over time despite tactical USD strength for now. After modestly hawkish Fed speak from new board member Waller, the FOMC minutes on Wednesday are worth a look," says Kurran Tailor, a strategist at Citi FX.

Rising spending has a flip side for the Dollar however, making it likely there comes a point when investors realise that holding the Dollar isn't the best way of positioning for a global recovery, even if that recovery is led by the U.S. There are always more attractive assets to be found elsewhere and this will be especially true in 2021 as the Dollar's offering to investors is undermined by the new average inflation targeting policy strategy of the Federal Reserve (Fed).

The Fed's strategy creates a negative correlation between the pace of U.S. growth and progress toward the Fed's inflation target on the one hand, and real terms returns offered to investors who hold U.S. government bonds on the other. Inflation expectations will be supported, if not lifted further by increased spending and the Fed's commitment to keeping interest rates effectively at zero until inflation has risen above the 2% target for a period, something that is not expected to happen before late 2023.

In other words, this will all sooner or later create sufficient incentive for investors to let go of the Dollar in order to pursue better opportunities in other currencies, economies and markets. This process may be aided by policy normalisation at other central banks like the Norges Bank, Bank of Canada and Bank of England sooner than in the U.S., with implications for the relevant currencies. 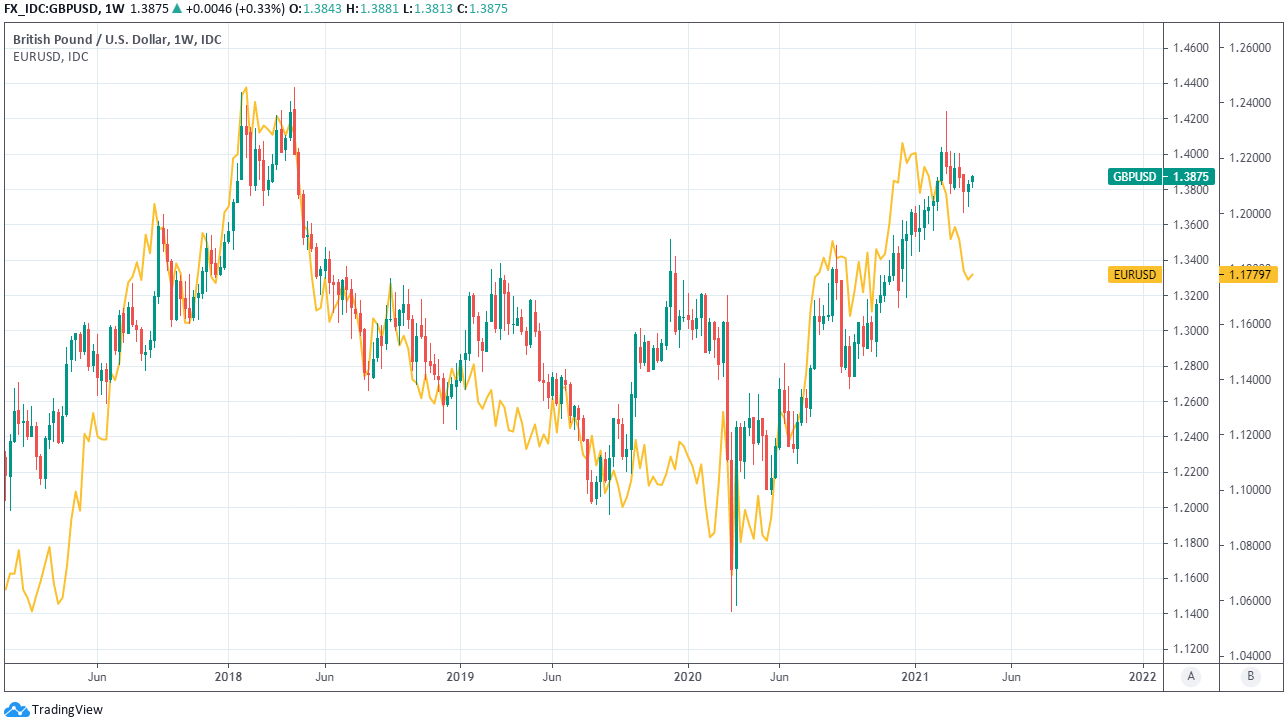 Meanwhile analysts at Goldman Sachs, Natwest Markets and elsewhere are looking for European coronavirus vaccinations to step up meaningfully next month and thereafter, enabling a summer easing of restrictions on activity and effectively firing a starting pistol on the continent's belated recovery.

This would support the Euro and other European currencies like Sterling, andat the expense of the Dollar.

"A vaccination inflection point for Europe, and the EUR, may not be as far away as current case trends make it seem. The relative growth shift in favor of the USD and against the EUR this year is now increasingly in the price – in combination, these may present an opportunity to reengage tactical long EUR positioning," says Paul Robson, head of G10 FX strategy for EMEA at Natwest Markets. "We remain long USD vs. CHF and JPY in the G10 space, though we are mindful of seasonal patterns that lean against the USD in April."

Much about the outlook for the Pound-Dollar rate depends on whether investors are ready to begin looking for opportunities and taking risks outside of the North American economies, as this is key for sustaining further gains by Sterling. However, and although there's uncertainty about how long these conditions could take to fall into place, some are already entertaining the idea of prepositioning in certain European currencies in order to benefit when this shift in sentiment eventually plays out.

Meanwhile, seasonal trends tend to turn against the Dollar in April and the Pound is typically one of the currencies which beneftis most from this.

"A BoE at the hawkish end of the spectrum and the pro-cyclical nature of the pound, which will likely benefit from the wider global economic recovery and a resumption in investment in the UK now that the majority of the Brexit uncertainty has subsided, should lead to further gains in the pound as the year progresses," says Thomas Flury, a senior FX strategist at UBS Global Wealth Management. "We expect GBPUSD to rise to 1.49 by end-2021. The USD will likely come under broad pressure again as investors unwind above-average holdings and sterling offers a good alternative for investment, in our view."