The Dollar hit the skids on Tuesday and the Pound-Dollar rate rallied after February retail sales data surprised on the downside, puncturing the tyres of an American currency that had been charged up on rising bond yields and suggestions of exceptionalist economic credentials.

Retail sales fell -3% last month when consensus looked for only a -0.5% decline, Census Bureau data revealed, which was more than enough to offset a large upward revision to the earlier estimate of a 5.3% increase for January.

"Weather conditions weighed on activity following a surge in spending in January," says Katherine Judge, an economist at CIBC Capital Markets. "With the adverse weather in the rear view mirror, the coming months are set to see an acceleration in consumer spending as services continue to re-open and additional fiscal stimulus arrives."

January sales growth was restated as +7.6% on Tuesday, although this still left total sales growth for the first two months of the year as lower than economists had anticipated, with a similar picture emerging in figures for the more important measure of core retail sales.

Core retail sales were down -2.7% in February after an upwardly revised +8.3% increase in January, although the prior month's expansion had originally been declared as +5.9% while economists were looking for a 0.2% increase in February sales on Tuesday.

"The combination of the potential ongoing boost from the stimulus payments made under the December Covid relief bill and the hit from the huge mid-month storm made these numbers a wild card. It’s impossible to know if sales would have risen without the storm, because we don’t know how much more of the $166B in stimulus payments would have been spent," says Ian Shepherdson, chief economist at Pantheon Macroeconomics. "We expect the next few months to bring big increases, on the back of the current round of one-time payments - two-and-a-half times bigger than the January checks - and the reopening." 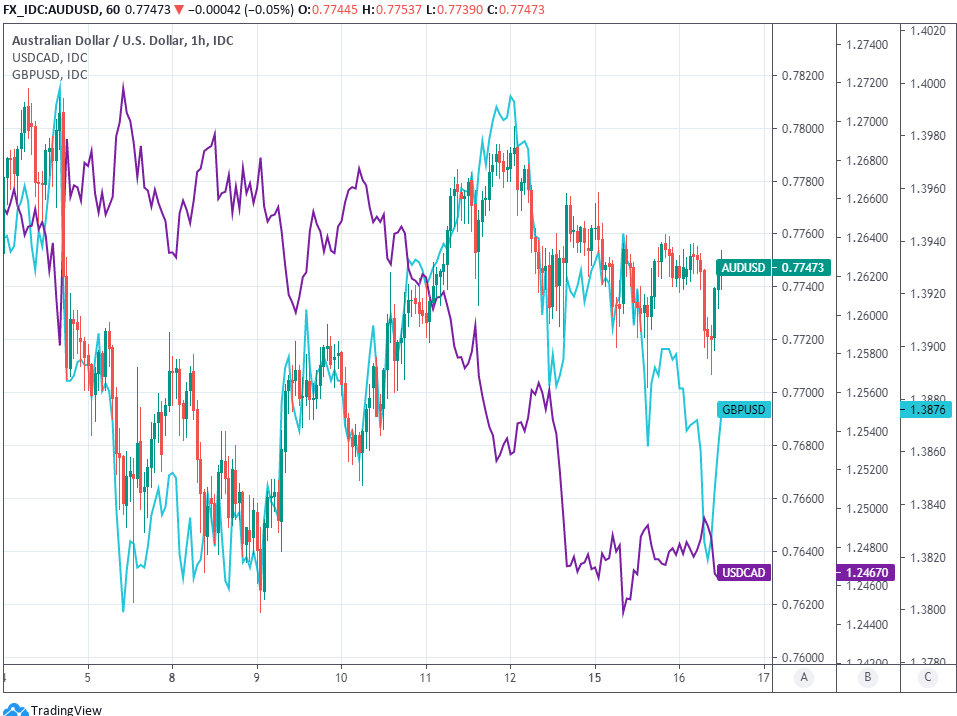 Above: AUD/USD shown at hourly intervals alongside Pound-Dollar rate (blue) and USD/CAD (purple).

Seperately but also on Tuesday other data showed U.S. industrial production falling -2.2% for last month, when the market consensus had been for a 0.5% increase, which also more than offset an upward revision to January's original estimate of a 0.9% increase to one of 1.1%.

"The severe winter weather in the south central region of the country in mid-February accounted for the bulk of the declines in output for the month," the Federal Reserve (Fed) says.

Expectations for U.S. growth have perked up this year in general but were bolstered last week when President Joe Biden signed off on a $1.9 trillion fiscal support package that furnishes many households with up to $1,400 in direct transfers just as in time for the reopening of many state economies, which is being aided improving momentum in the U.S. vaccine rollout.

"They took good note of the arguments presented by the Commission as regards the application of the general escape clause in the Stability and Growth Pact. They agreed that fiscal support should not be withdrawn too early, but at the same time that member states will have to adapt their policies at an appropriate time to ensure fiscal sustainability over the medium term," states the readout from an informal video conference of Europe's economic and finance ministers. "The Commission is expected to set out more detailed guidance for fiscal policies in its European Semester spring package."

President Biden's suggestion that all American adults could be offered the first of a two shot vaccine by May 01 means the world's largest economy could soon leapfrog the UK, which was previously leading the charge among major economies with its pathway toward achieving the same by July.

This and fiscal stimulus are feeding expectations for an economic outperformance as well as vindicating the recent sell-off in the bond market, which has lifted yields and helped the Dollar find its feet against many rivals, but especially the lower yielding ones.

The Pound-Dollar rate rallied following the data while the Australian and New Zealand Dollars steadied having also underperformed earlier in the session.

"With the global economy increasingly on a path out of the pandemic, focus turns to the Fed’s communications on Wednesday, which will include fresh economic and interest-rate projections. Our charts suggest a neutral to positive stance for the US Dollar, but there are exceptions notably in some EM currencies and the Canadian Dollar," says Karen Jones, head of technical analysis for currencies, commodities and bonds at Commerzbank. 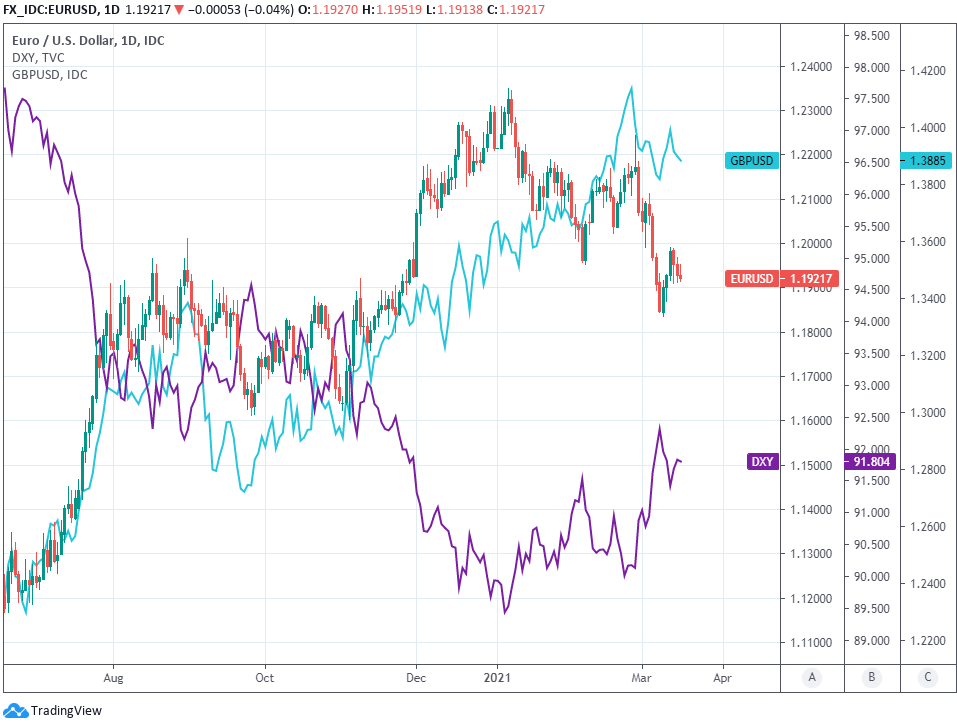 Tuesday's sales data comes barely a day out from the March monetary policy decision of the Federal Reserve from which investors will be looking to see wagers that Federal Open Market Committee members could vote to lift the current 0% to 0.25% Federal Funds rate range as soon as 2023 vindicated. Those wagers imply an even sooner end to its $120bn per month quantitative easing programme and further upside for U.S. bond yields this year. The Fed decision is out at 18:00 on Wednesday.

Wednesday refusal by the Fed to indulge the market is a risk to a greenback that had pushed the Pound-Dollar rate into a test of the 1.38 handle on the downside on Tuesday, amid what otherwise appeared to be profit-taking that made Sterling the worst performing major currency on the day. Underperformance comes ahead of the March Bank of England (BoE) decision, which is due at 12:00 on Thursday and the highlight of Sterling's week.

"The GBP is one of four G10 currencies still holding on to YtD gains vs the USD (CAD, NOK, and AUD are the other three). Given the importance of narratives, it's also worth considering that the bounce in EURGBP has coincided with various headlines related to the suspension of Oxford/Astrazeneca vaccine jabs in a number of countries. For the time being, we're inclined to view this as a sentiment-related factor rather than a fundamentally bearish issue for the GBP," says Stephen Gallo, European head of FX strategy at BMO Capital Markets. "The BoE's balancing act is not much different from the Fed's: the central bank has to be reasonably upbeat about the near-term growth outlook without forcing the market to price in a very early tightening of policy, though the latter does not yet appear to be the case (the March and June 2022 short sterling contracts are not exactly filled to the brim with rate hike expectations)."