The Dollar was down and out for the count against all major currencies Thursday in an ominous sign of what may be to come in the year ahead, according to a range of analyst forecasts, many of which envisage the U.S. currency as the big loser from a great, global economic recovery in 2021.

Investors appeared to want no part of the U.S. currency on Thursday as each of the major Dollar exchange rates declined while the Dollar Index fell further below a key support level that was breached on Tuesday this week.

Dollars have been sold and other riskier currencies bought heavily after global economic recovery prospects were bolstered by Britain's approval of the coronavirus vaccine made by Pfizer and BioNTech, which could indicate that other countries are also likely to approve the vaccine over the coming weeks.

The American and German duo are not the only ones to have claimed success in the race for a coronavirus vaccine, although the prospect of an imminent rollout is a relief for the battered and bruised global economy as well as a shot in the arm for investor sentiment.

"The view of USD depreciation has certainly become more widespread in the financial markets in recent weeks with the news of vaccines being potentially rolled out sooner than expected helping to lift optimism of a strong rebound in global growth," says Derek Halpenny, head of research, global markets EMEA and international securities at MUFG. "We see compelling reason to expect NOK out-performance next year." 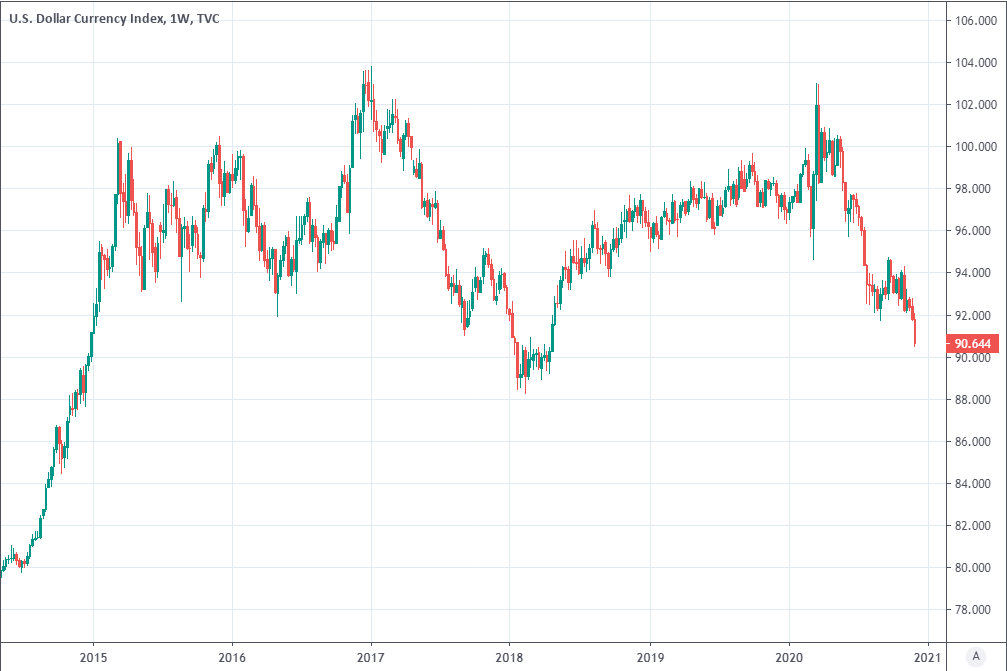 It's hoped that availability of a vaccine will make governments less likely to continue hamstringing economies with meddlesome restrictions on activity, thus enabling many to climb out of the crater left behind by the 'lockdown' seen in the early months of 2020 and again in Europe during the final quarter.

MUFG forecasts this global recovery will lift oil prices by 27% to $61 per barrel next year, with significant implications for the currencies of oil producing countries. However, the bank sees Norway's Krone as one of the most likely to benefit from this, in part because of its extreme undervaluation.

The Norwegian Krone was already the best performing major currency in November, but remained the second worst performer for 2020 in early December, behind only the ever unravelling U.S. Dollar.

Furthermore, out of all of Norway's major trading partner currencies, the Krone has risen against only Pound Sterling in the last five years owing to the 2014-to-2016 collapse of oil prices which neither Brent crude nor North America's West Texas Intermediate have fully recovered from.

These declines have left the Krone undervalued by as much as 25% according to purchasing power parity measures of valuation, which MUFG judges to be unsustainable. The bank forecasts a -7% decline to 8.12 for the USD/NOK rate over the next 12 months. 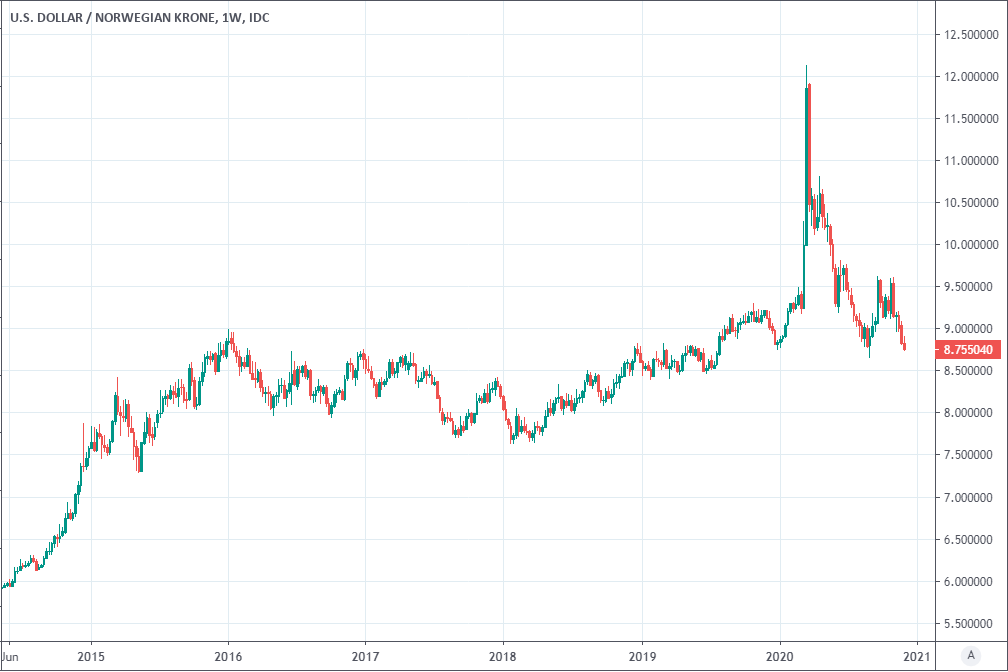 "The USD could emerge as one of the biggest losers from the global cyclical upturn that we expect to gather pace in 2021 and beyond. In particular, we expect that recovering global growth and trade will lead to increasing selling of USD by global corporates," says Valentin Marinov, head of FX strategy at Credit Agricole. "The EUR should benefit from renewed purchases by Eurozone exporters as trade with the rest of the world picks up."

Marinov and the Credit Agricole team say the Dollar remains overvalued against most G10 currencies and that rising spending as well as mounting budget deficits will provide investors with an incentive to sell it in exchange for other currencies during the year-ahead. The bank looks for the Dollar sell-off to be bolstered by global corporate exporters who either sell into the world's largest economy or simply deal in products denominated in the U.S. currency, which is the case for almost all commodity dealers.

Dollar proceeds are expected to rise with the global recovery while a steady conversion of them back into home currencies is seen favouring the Euro given Europe's mighty manufacturing sector. Credit Agricole forecasts EUR/USD will rise to 1.22 by the end of 2021 and 1.25 by the end of 2022.

"Battling deflation and faced with the huge task of returning economies to pre-Covid-19 levels, eurozone policymakers are certainly less tolerant of euro strength. Yet our conviction call of an exodus from precautionary USD holdings and into emerging markets in 2021 suggests the weak dollar trend will dominate and that the ECB will have to wage war against EUR/USD at 1.25," says Petr Krpata, chief EMEA strategist for currencies and interest rates at ING. 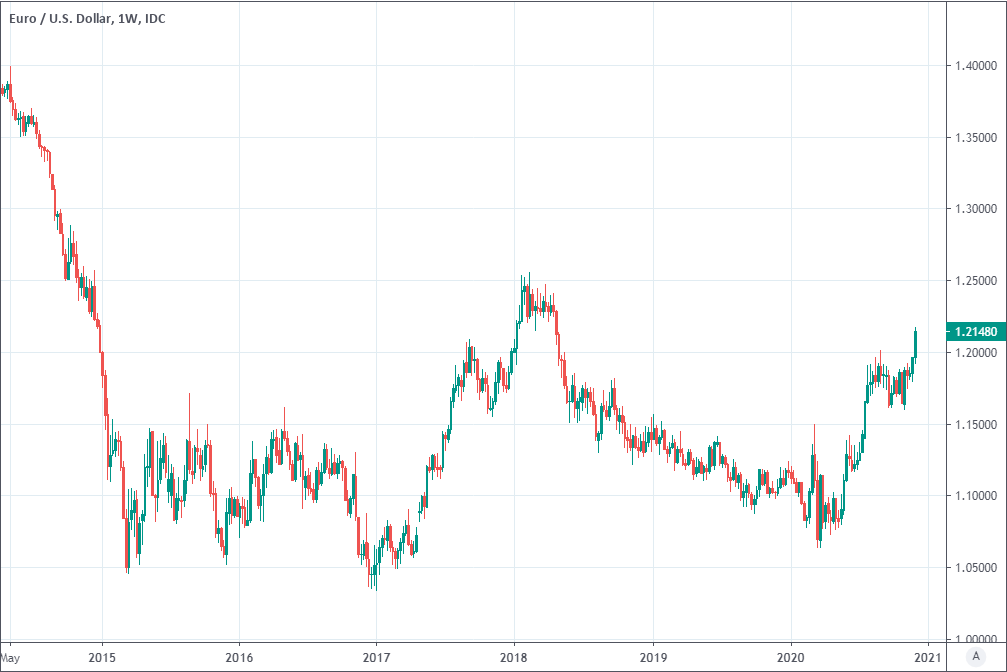 Ongoing Dollar declines are seen being exacerbated by Federal Reserve (Fed) monetary policy, Washington's fiscal policy and a possible change of tone from the White House on U.S. policy toward China precipitated by November's election in the ING outlook for 2021.

The Fed is expected to continue printing new Dollars at least at its current pace through the next year before pumping them out into the world's financial markets through its quantitative easing programme and variety of other pandemic-related lending programmes.

This and a Federal Funds rate that remains at historic lows between 0% and 0.25% are expected to keep inflation adjusted bond yields, or so-called real yields, pinned to floor and in the process to continue discouraging investors from holding the Dollar.

Krpata and the ING team see the Euro and Chinese Yuan as among the most likely beneficiaries of this environment. Pound Sterling meanwhile, is tipped by all three of the above lenders to be a middling performer in 2021 as the British economy adjusts to a new trading relationship with the EU.

"We expect a ‘skinny’ EU:UK trade deal to provide some modest support to the GBP," Krpata says. "Bar the initial GBP rebound in response to a trade deal, longer lasting GBP strength versus the EUR seems unlikely. The soft nature of the trade agreement (as envisaged in our base case) will cause some permanent damage to the UK economy and will limit its scope for material outperformance, while GBP does not show signs of a meaningful medium-term mis-valuation (based on our BEER model - Figure 29) despite the profound fall in sterling since 2016...We expect EUR/GBP to trade broadly flat around 0.88 in 2021 but GBP/USD to rally above 1.40 next year." 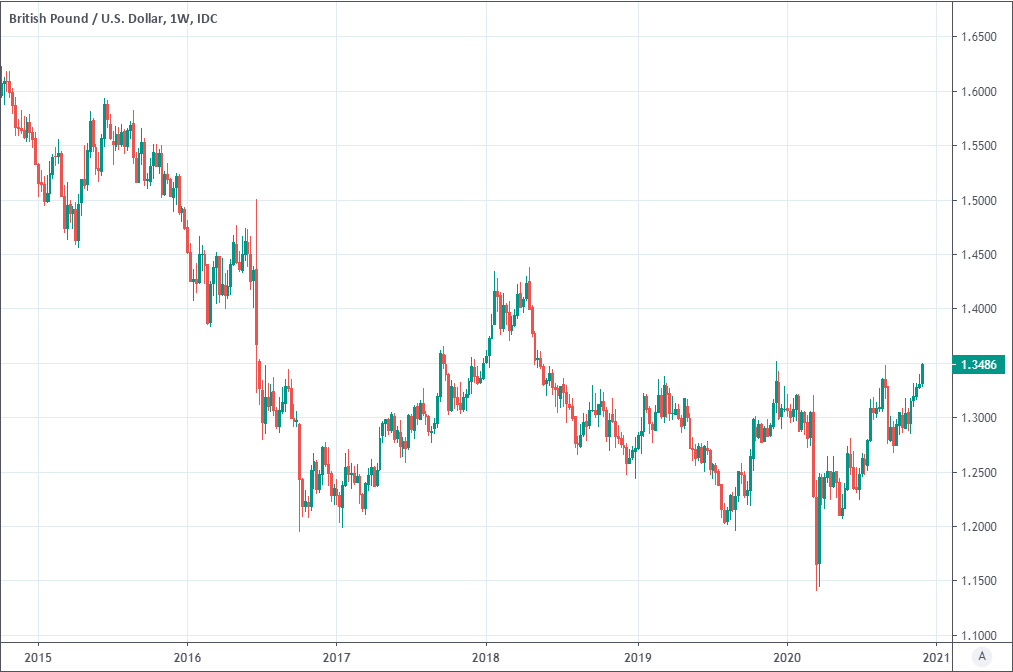