Setting the critically fundamental issue of a post-Brexit trade deal aside, what is the technical market setup suggesting the future holds for the Pound-to-Dollar exchange rate?

Analysis from Julius Baer - the Swiss private bank - shows a more sustained recovery might be on the cards for Sterling.

"The GBP/USD is facing major resistance at 1.34. Nevertheless, as medium-term momentum is bottoming, we remain bullish and long," says Mensur Pocinci, Head of Technical Analysis at Julius Baer.

The GBP/USD exchange rate rallied to 1.3312 on Wednesday, which is its highest level since September 04 as a recovery trend from the September 23 low at 1.2676.

The trend higher appears to be intact, but a resistance area located at 1.34/1.35 is identified by Pocinci as a potential roadblock to further advances. Indeed, since 2018 advances in Sterling-Dollar have been rejected in this region on four occasions.

Fundamental analysts are split on how far Sterling might rally in the event of the UK and EU achieving a post-Brexit trade deal, and if those who see a tepid rally are correct then a technical barrier at 1.34/1.35 could prove to be an upside limit. 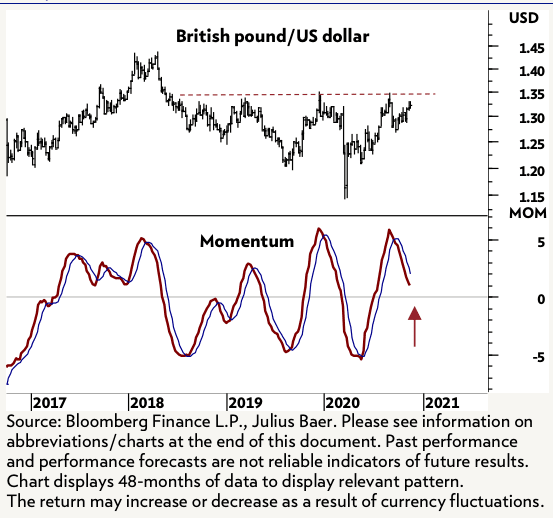 "As seen on the chart, one could identify an inverted head & shoulder bottom formation. It is probably now or never for a sustainable recovery, as a failure to rise above 1.34
would probably discourage bulls and open the way for a retest of 1.20," says Pocinci.

Nevertheless, as medium-term momentum is about to bottom, the analyst says the odds are slightly in favour of breaking above 1.34.

"A rise above this key level would not only validate a long-term reversal pattern, but it would also mean fresh new two-year highs, which in turn would likely trigger further buying of cable. We recommend that investors remain long the cable, while watching closely in the coming 2–3 weeks if major resistance at 1.34/1.35 can be broken" says Pocinci.