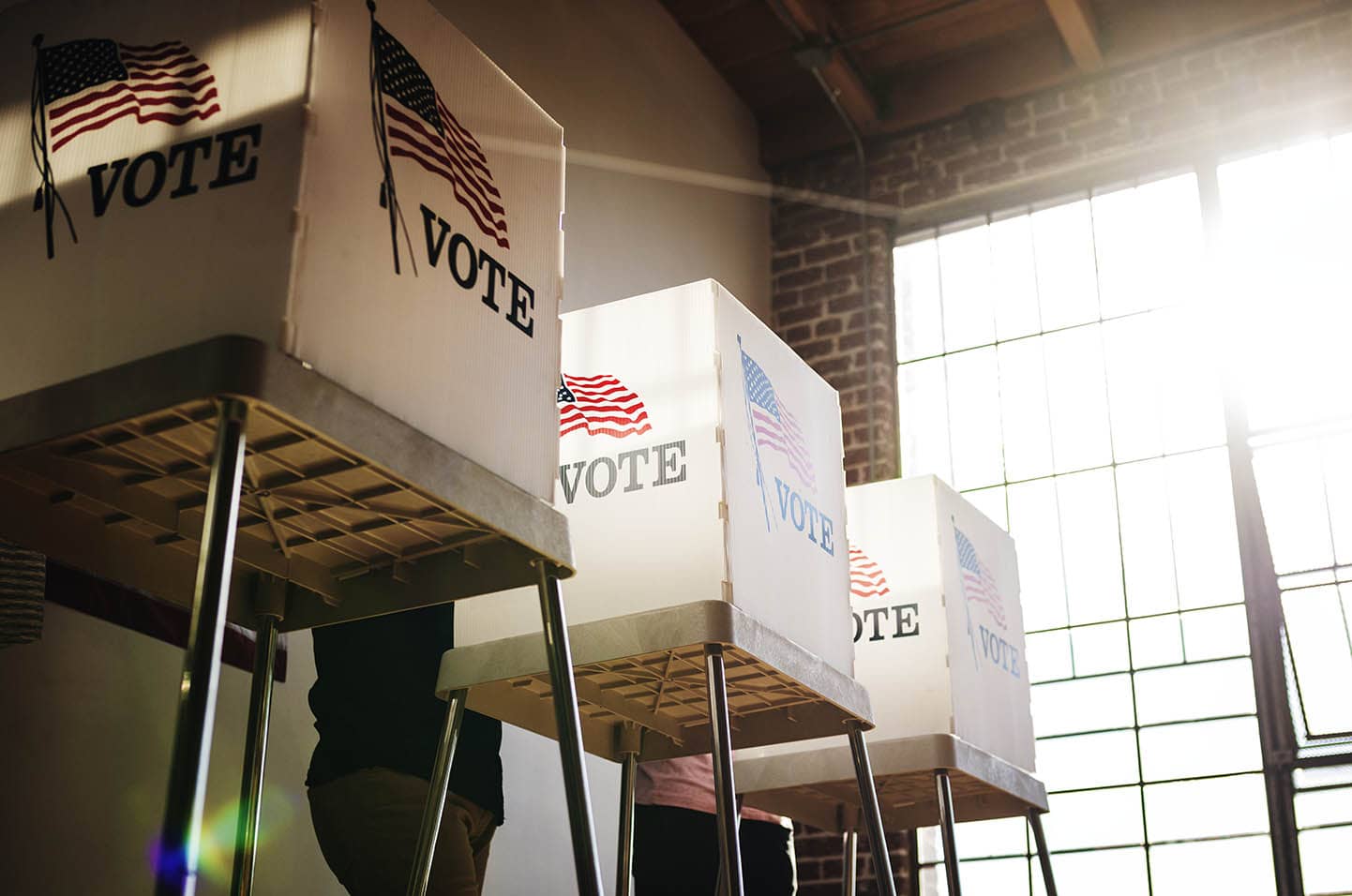 The Democrats will not secure a 'blue wave' outcome in the November election according to a prominent analysts we follow, a view which if correct could mean markets face heightened volatility and Dollar strength in November and potentially into year-end.

"Forget the clean-sweep," says Steen Jakobsen, Chief Economist and CIO at Saxo Bank. "It is far less likely than the current market perception."

The view rows against a market increasingly expectant of a Democrat clean sweep, a view built around polling of battleground states that suggests Biden maintains a comfortable lead but which could be mimicking the large errors at the state level in 2016.

"Assuming Biden’s polling remains where it is (currently +10.0pts in the RCP average), attention will increasingly remain on the Senate outcome and what that might mean for possible stimulus legislation next year. The Democrats remain the favourites to win control (at 69% in the FiveThirtyEight model) but there are still a number of very tight races," says Jim Reid, a macro strategist at Deutsche Bank. 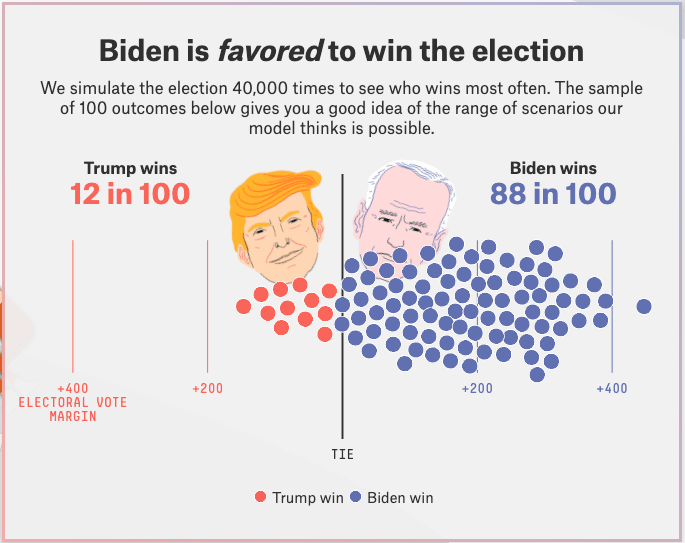 Above: Modelling by FiveThirtyEight has an 88% of a Biden win.

But Saxo Bank have on Tuesday told clients to prepare for volatility in the immediate post election period in anticipation of a surprise outcome.

"As someone who believed that Biden could do a clean sweep six weeks ago, it may seem odd that I now, again, have changed my position. I still have a high conviction on a Biden win, but a far lower conviction that the Democrats have a chance of taking a Senate," says Jakobsen.

The Democrats must take the Senate in order for the party to hold both houses and the White House, which would allow them full legislative control.

In turn, such a hold would allow them to formulate a sizeable stimulus package for the economy, an outcome widely seen as positive for equities and negative for the Dollar. (We have produced a more difinitive report on the Dollar outlook on a blue wave outcome, which includes views from the likes of Goldman Sachs, JP Morgan, UBS and more, it can be found here).

Volatility trades have cheapened notably over recent weeks as markets fears for an uncertain outcome ease. "Volatility could fall immediately after November 3 if results are decisive, but could rise substantially if concerns about prolonged disruption from a contested election rise again," says Anshul Pradhan, a fixed income strategist with Barclays.

"Democratic candidate Biden is leading the polls. But the outcome could be tighter than it now looks. Trump could still win and if he does not, he might dispute the result," says Georgette Boele, Senior FX Strategist at ABN AMRO.

Saxo Bank are suggesting clients buy cheap volatility now in the event of a surprise, on a view that the U.S. public is not ready for an effective 'one party' rule.

"The Democratic Party is already pre-celebrating an election victory and the market sees a high probability of a clean sweep scenario and smooth sailing to new stimulus measures. But the U.S. is not ready to leave the keys to a political majority in my opinion. This is a big change in my position into the election," says Jakobsen.

Jakobsen's reasoning for the shift in view that would see the Democrats fail to secure the Senate include:

1) "The Democratic Party is already allocating cabinet posts before the election! This is a classic Democratic mistake. Remember Hillary Clinton and her hubris?"

"It was around this point in the 2016 US presidential election run-in (with 3 weeks to go) that Clinton's lead in the polls began to narrow. A repeat in 2020 (Biden's lead slipping) would set alarm bells ringing for another 'against all odds' Trump election win. Not over yet," says Viraj Patel, FX & Global Macro Strategist at Arkera.

Politico reported as far back in August that the Biden campaign was preparing a government. The same publication was reporting on the behind-the-scenes moves by Clinton's team to 'game out' a cabinet as early as March 2016, months before the official campaign even began.

"Officially, Democratic presidential nominee Joe Biden and his campaign believe that three weeks before Election Day is far too soon to think about Cabinet nominees or how to fill any other top White House jobs. But there’s already a formal Joe Biden/Kamala Harris transition team in place doing just that," reported Vox on the weekend.

2) The Biden tax plan is far more heavy (negative) for the economy than the "pipedream" sold by markets.

According to the Tax Foundation’s General Equilibrium Model, the Biden tax plan would reduce GDP by 1.47% over the long term.

Biden would enact a number of policies that would raise taxes on individuals with income above $400k, including raising individual income, capital gains, and payroll taxes. Biden would also raise taxes on corporations by raising the corporate income tax rate and imposing a corporate minimum book tax.

3) The Polls are simply wrong (mathematically) says Jakobsen: The typical polling margin is ±3% in state polls but Saxo Bank quantitative research suggests the real-world margin of error should be twice as big.

"In practice, this means that some of the 2016 state polls would not have been able to call a winner within the uncertainty limits of the poll," says Jakobsen.

RealClearPolitics poll collation data shows that the Democrats are likely to take 47 seats against 46 by the Republicans. They identify seven seats that are 'toss ups' just three weeks out of from the vote. 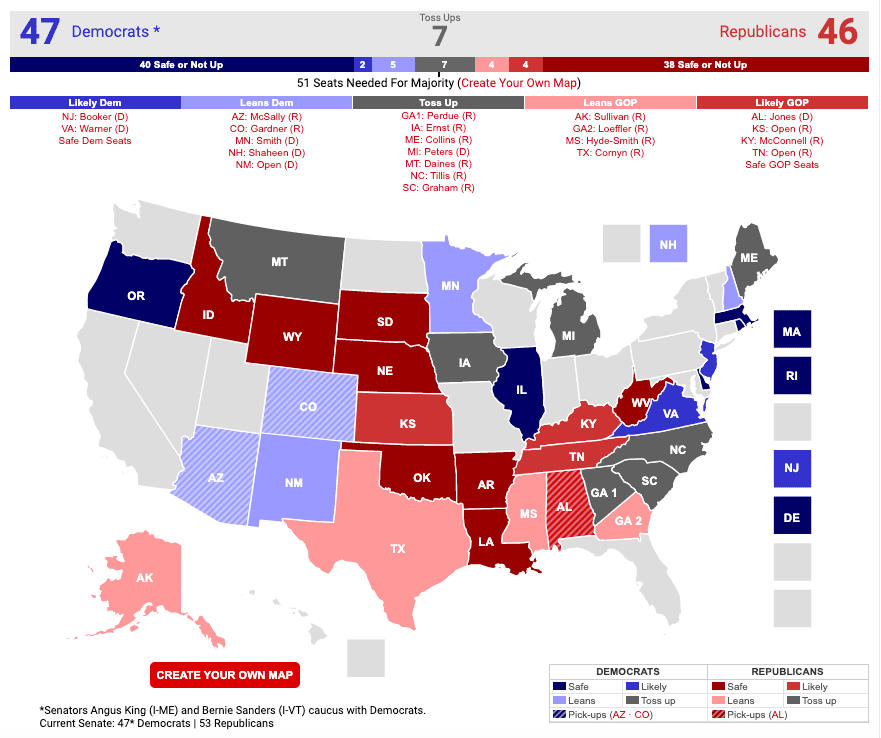 Above: States where the Senate outcome is considered a 'toss up' according to RealClearPolitics.

Aiding an expectation for a the Republican's to hold the Senate, Jakobsen cites research from CloudResearch that finds a substantial 'shy' Trump voter contingent that polling simply is not picking up.

The research showed 11.7% of Republicans say they would not report their true opinions about their preferred presidential candidate on telephone polls.

In contrast, just 5.4% of Democrats say that they would be reluctant to share their true voting intentions — roughly half the number of Republicans reluctant to tell the truth on phone polls.

10.5% of Independents fell into the 'shy voter' category, just a percentage point lower than how Republicans react to phone polls.