The Pound-to-Dollar exchange rate was in recovery mode Wednesday on elevated hopes that Brexit trade talks will continue beyond a self-imposed UK deadline, but recent losses leave technical indicators warning of a potential fall back to May lows.

Pound Sterling has been volatile in recent days having come under pressure against a vast majority of its major rivals so far in the new week although, crucially, it retains a fractional gain over the Euro and so may not yet reflect any Brexit-related disappointment that could still materialise ahead of the weekend.

“The pound is outperforming across the board this morning & holding in well on elevated chances talks will continue beyond mid October,” says  Neil Jones, head of FX Sales for financial institutions at Mizuho Bank London.

Investor attention is fixed on Thursday’s European council summit, ahead of which EU leaders have doubled down behind their earlier position that any trade deal must offer fishermen automatic access to British waters and that UK economic policy must continue to be guided by EU rules in a range of areas.

EU leaders are sticking with their position but have also indicated that they themselves will not be the ones to walk away from the table, which leaves the ball in Prime Minister Boris Johnson’s court. 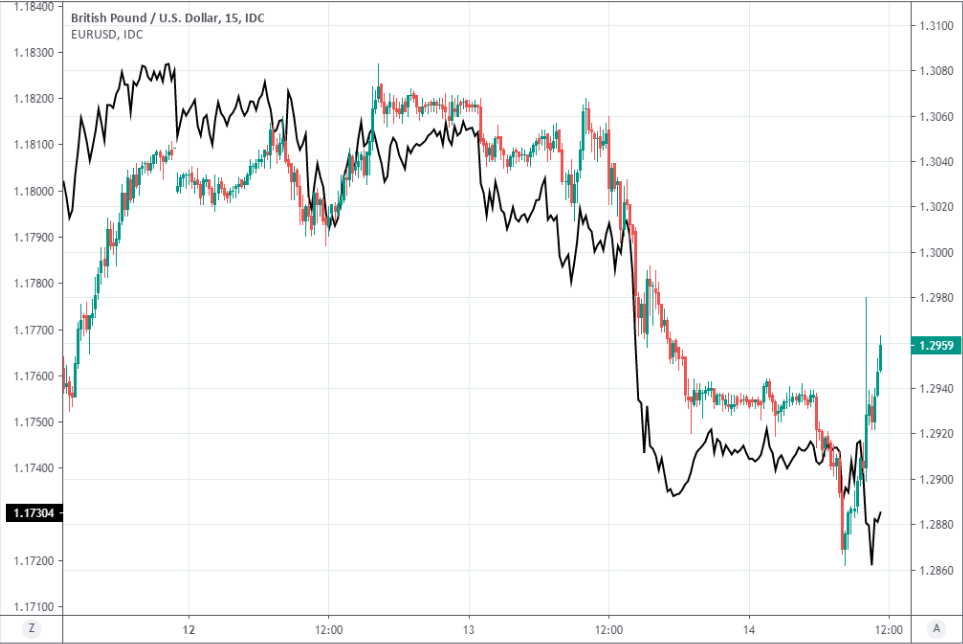 Johnson has several times threatened to walk away and is expected to speak with EU Commission chief Ursula Von der Leyen via telephone Wednesday's, according to the FT, and Pound Sterling price action and analyst commentary suggests that expectations of an extension to the talks are running high.

That could be said to leave the Pound-to-Dollar rate vulnerable to disappointment, after recently having sustained technical damage on the charts.

“GBP/USD has reached its corrective target and failed as expected. We will therefore assume another leg lower is in the offing and we should see further losses to 1.2445 and then 1.2250/00,” says Karen Jones, head of technical analysis for currencies, commodities and bonds at Commerzbank. “Only above the 1.3083 level would somewhat neutralise our outlook. It guards the 1.3201 March high and the recent high at 1.3483 and the 1.3472 downtrend.”

The Pound-to-Dollar rate was pushed back below the 1.30 handle in Tuesday trading after having failed to overcome a key resistance barrier near 1.3083, which has given Commerzbank’s Jones increased conviction in her view that further declines are likely.

Jones and the Commerzbank team are sellers of Sterling from 1.3042 and are looking for a decline to 1.2450 in the first instance, although they have have a one-to-three week target of 1.2250, which would leave the Pound-to-Dollar rate at its lowest level since May.

Earlier losses mainly reflected increases in the Dollar, which had multiple drivers, not weakness in Sterling, which could still be to come. 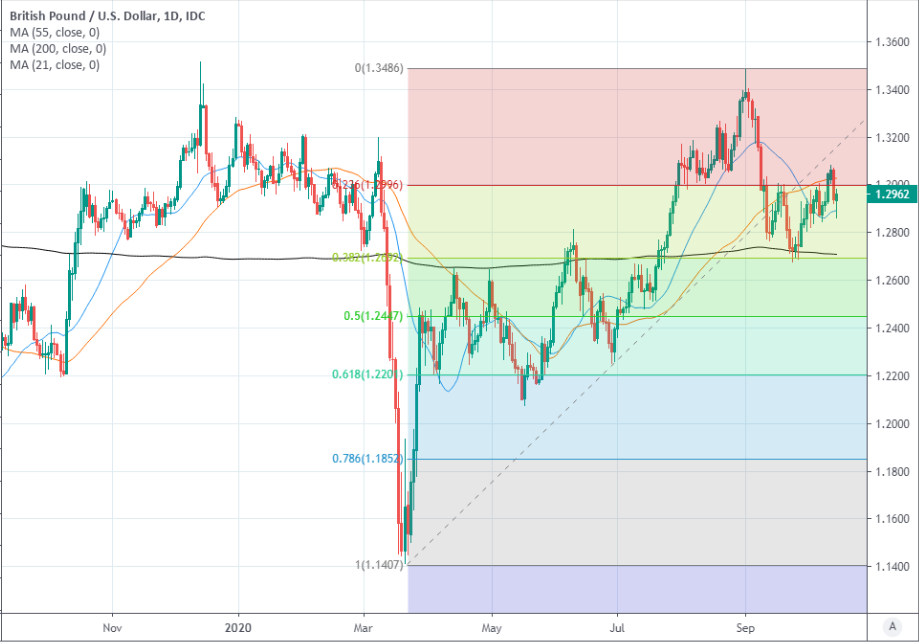 Above: Pound-to-Dollar rate at daily intervals, with Fibonacci retracements of May recovery and selected moving-averages.

“Expect volatility in GBP into the EU summit tomorrow as the currency will be subject to a large degree of headline risk,” says Jeremy Stretch, head of FX strategy at CIBC Capital Markets. “Sterling risks are clearly non-symmetrical into the conclusion of Brexit talks. Indeed with the EU accelerating preparations for a no deal, Sterling downside is set to remain in play with 1.2846 lows from Friday marking the next key level of support.”

Pound-to-Dollar rate declines built when a World Trade Organization ruling authorising the EU to impose tariffs on around $4bn of imports from the U.S. undermined risk appetite even further late on Tuesday. Investors had already been upset by an announcement from Johnson & Johnson, which said its coronavirus vaccine had suffered a setback in phase three trials.

This was around the time Governor Andrew Bailey suggested the Bank of England still views negative interest rates as a worthwhile policy tool. In addition, a lack of Congressional support for a pre-election financial support package for households and a reported White House request for Congressional approval of arms sales to Taiwan may also have boosted the Dollar and undermined risk currencies like Sterling.

Brexit remains the key driver of Pound Sterling’s outlook, with the outcome of ongoing trade talks marking the difference between whether the Pound-to-Dollar rate ends October back above 1.30 or if it returns toward the May lows the charts are now warning of.

“We expect GBP/USD to trade closer to 1.3000 if the EU and UK agree to continue trade talks beyond this week. If trade talks breakdown, GBP/USD downside will likely be contained around 1.2500 because GBP/USD is already significantly undervalued,” says Elias Haddad, a senior FX strategist at Commonwealth Bank of Australia. “Deals in areas such as aviation and road transport could still be reached in an effort to avert disruptions when the transition period ends on 31 December.”