The Pound-to-Dollar rate defied gravity Thursday but is at risk of slipping lower through volatile summer months as coronavirus, geopolitical tensions and Brexit compete with the global recovery narrative for investors' attention.

Pound Sterling edged higher against major rivals except the antipodean Dollars and the Swedish Krona, with all recovering from losses in the prior session.

The Pound had undeperformed when the UK was targeted by U.S. tariffs Wednesday, raising fears for the economy as well as trade negotiations amid lingering deadlock in the Brexit talks, although it was resistant to gravity on Thursday alongside earlier underperformers like the Kiwi.

"GBP will remain the FX market's top "RORO currency" for the time being," says Stephen Gallo, European head of FX strategy at BMO Capital Markets. "It's very difficult to judge which way global risk assets are going to lurch next, and the GBP's positive relationship with those variables is still reasonably strong." 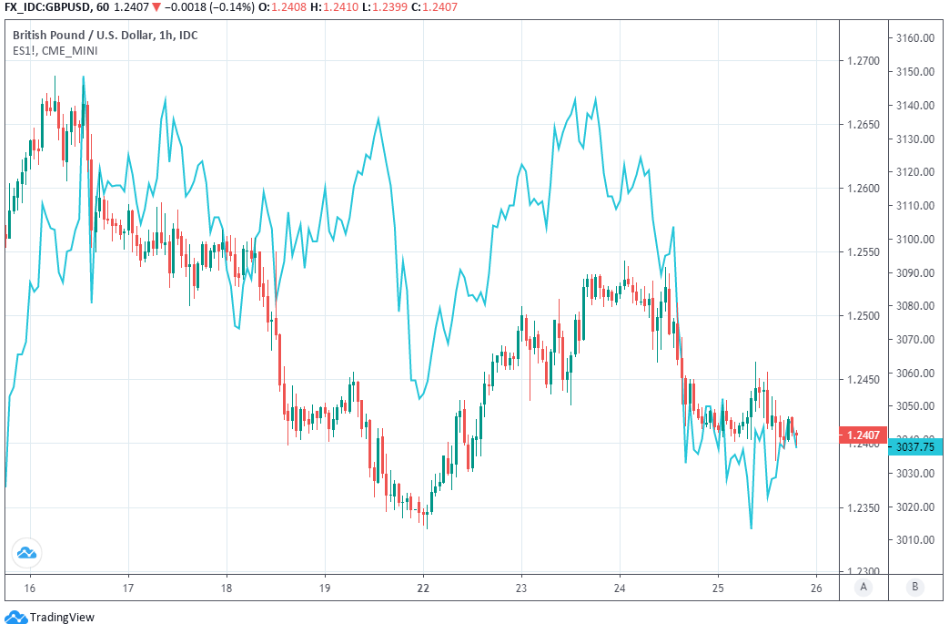 European hours saw bids return for investor favourites like the Aussie, Kiwi and Swedish Krona, which all underwrite economies that were less affected by the pneumonia-inducing disease and that have healthier balance sheets.

These currencies are seen as the least bad out of a bad bunch by some so have tended to outperform in recent weeks, although all are at risk from mounting geopolitical tensions and the prospect of a second wave of coronavirus.

Sterling was buoyant but is besieged by an additional schedule of domestic headwinds like Brexit deadlock and a relatively more severe coronavirus problem that was this week still producing new infection numbers equal to those around the time the UK went into 'lockdown' on March 23.

"The other important factor is that a UK/EU-27 FTA by the autumn looks increasingly likely; further progress simply means risk assets will need to decline even harder in order to force GBPUSD back into the low-1.20s in the near-term," Gallo says. "We would steer clear of the pair for the time being and wait to see if it's able to start closing back above 1.2500 again."

Gallo says the Pound will remain highly sensitive to the ebb and flow of market risk appetite given its unique domestic challenges that risk exacerbating or otherwise adding to the economic carnage caused by the coronavirus, but at the same time he's increasingly reluctant to bet against it. 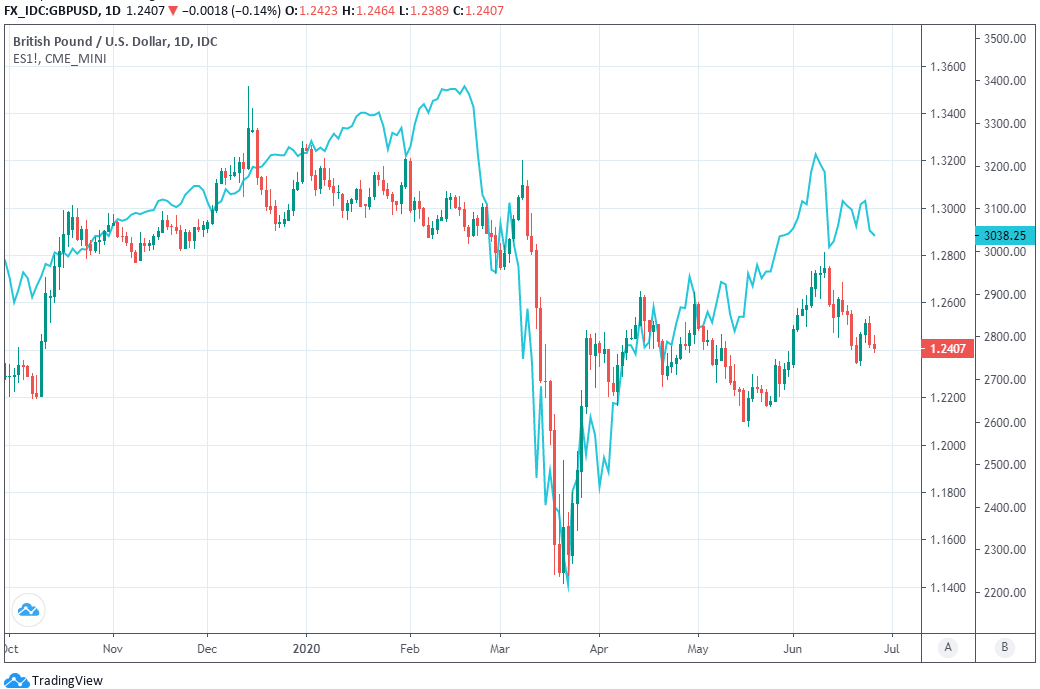 BMO and others in the market are ever more conscious of upside risks to Sterling exchange rates in the event that a trade agreement is reached with the EU or an extension of the transition period is agreed, a prospect that is  countering concerns about a Dollar recovery driven by a either a second wave of coronavirus or geopolitical tensions.

Brexit talks will renew in July after being roadblocked by incompatible objectives on both sides through the first half of the year, which has weighed on Sterling given the standstill transition period comes to an end with 2020 and Prime Minister Boris Johnson has so-far refused to extend it.

"We would caution that negotiations have been at similar tipping points in the past, only for a solution to be found. This, however, will not be enough for markets to ignore developments. It is likely to be an uncertain month for GBP which we think is vulnerable to further downside," says Kamal Sharma, a strategist at BofA Global Research. "June does not show the same strong seasonal patterns but we think there is enough event risk building that could make next month a volatile month for the pound."

The PM said the very same thing about October 31 only to request an extension as the deadline drew close. Absent a repeat of that, a trade deal would need to be agreed in order for a 'no deal' Brexit to be avoided once past year-end, and investors would want to see as substantial an agreement as is possible in the little time left before year-end. 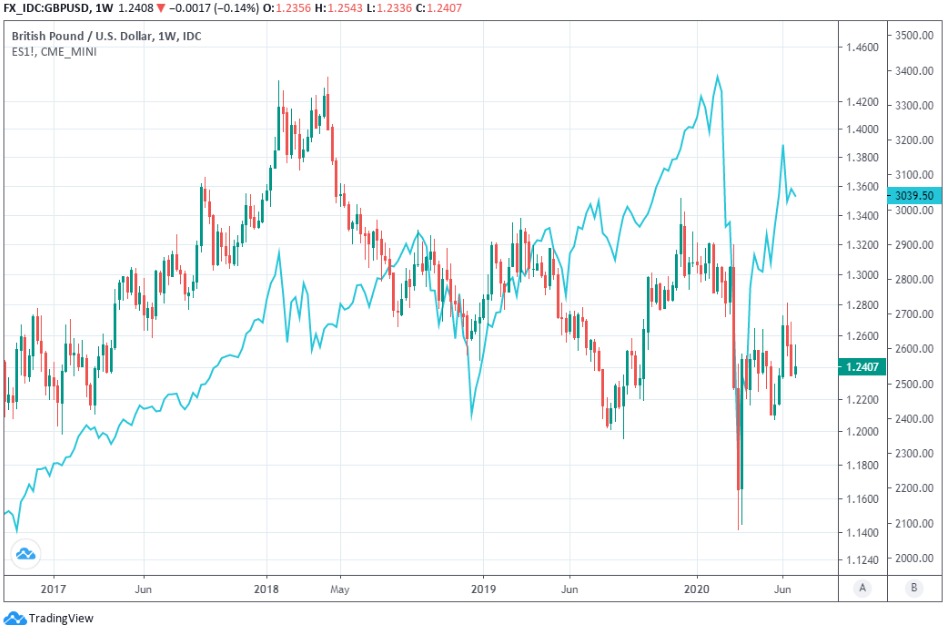 British negotiator David Frost said last "the fundamentals of being an independent nation are not a negotiating position," continuing a rejection of terms that would be "unprecedented" in the history of trade agreements.

His firm stance is uncharacteristic of the British side thus far in the Brexit process so investors, analysts and the public at large can do little but guess whether it reflects a bluff on the part of an under-fire Prime Minister or a change in the psychology guiding Downing Street in the negotiations.

"For many seasoned Brexit followers, recent developments will come as little surprise: the EU continues to believe that the UK wants to cherry pick the best bits of EU membership, whilst the UK believes that the EU's negotiating stance is too ideologically rigid," Sharma says. "We think the situation is critical enough to assume that the UK government will not ask for the extension and now also believe that there is unlikely to be an extension beyond 2020."

BofA Global Research forecasts the Pound will fall to 1.23 by the end of September before declining to 1.21 in time for year-end, although some of this fall reflects anticipated strength in a Dollar.

The greenback is tipped to benefit from the dawning realisation among investors that the coronavirus might take some time to contain and that as a result, the global economic recovery could be a slow and drawn out affair rather than the quick v-shaped rebound markets have assumed.

BMO forecasts a Pound-to-Dollar rate of 1.22 around September ahead of a decline to 1.18 into year-end, although its sees downside risks ahead for the Dollar into year-end due to the November Presidential election.