The Dollar was in recovery mode Thursday and some analysts say it could have the legs to go further after the June Federal Reserve (Fed) policy update drew a line under weeks of losses, although the nascent correction is seen by others as likely to produce buying opportunities in the Pound-to-Dollar rate.

Investors bought Dollars hand over fist Thursday, leading the greenback higher against all major rivals other than the safe-haven Yen and Swiss Franc after the June Fed policy statement prompted a wave of profit-taking across markets.

The Fed left its interest rate and the settings of its various crisis-related programmes unchanged on Wednesday, in line with expectations, but said little about how they're likely to evolve as the year draw on when in the market had hoped it'd lay the foundations for adopting a so-called yield-curve-control policy. 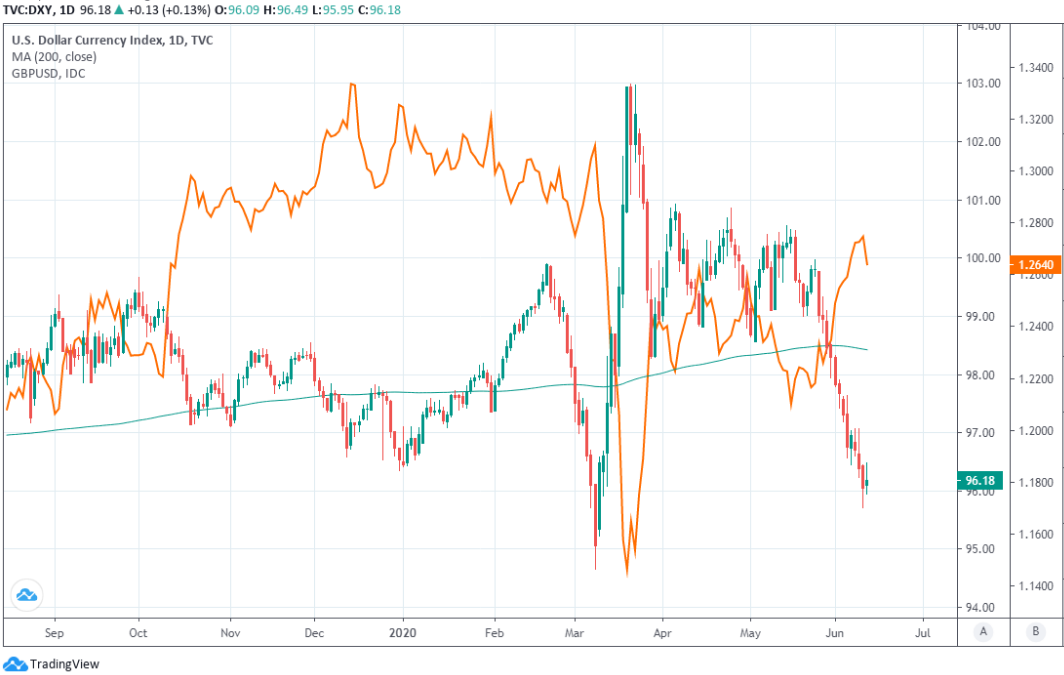 The Fed hasn't bailed on the economy and remained in crisis-fighting mode this June, as was evidenced by Wednesday's commitment to keep buying American government bonds "at least at the current pace" in the months ahead.

But the sheer scale of the rally in stocks and the currencies that shadow them meant that some investors were always going to be left hanging by anything less than a swing to knock the metaphorical policy ball out of the park.

"As long as investors are afraid to miss out on the rally, the dollar will be out of favour. But markets do not seem to be pricing in the scale of the earnings and macro weakness we are seeing and the likelihood of a slow rather than V-shaped recovery. A deterioration in sentiment will boost the dollar," warns Georgette Boele, a senior FX strategist at ABN Amro, who looks for the Pound to fall back to 1.18 this summer and for the Euro-to-Dollar rate to hit 1.05. 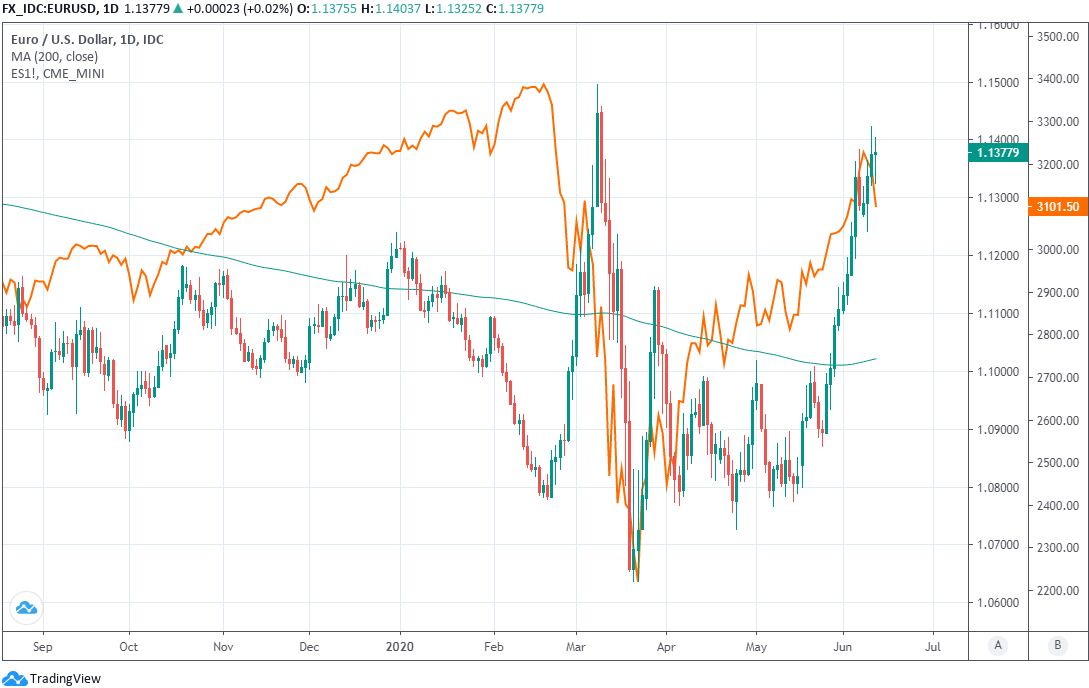 Falling stocks weighed on most major currencies Thursday and illustrated a trend that was addresed by strategists at BofA Global Research this week. They say this correlation will loosen over the coming months as it becomes clear the coronavirus recovery will be more uneven and drawn out than investors have banked on thus far, leading traditional fundamentals like economic statistics and interest rate expectations to reassert themselves.

"FX trading has been reduced to a leap of faith in the Fed "put," as evidenced by SPX being the only significant factor on average across the top G5 currency pairs in our multivariate framework for the last 10 weeks. This is unprecedented and antithetical to the way FX markets are supposed to work, as macro factors related to relative cycle and terms of trade have simply not been relevant," says BofA's Ben Randol in a research note. "We do see the equity grip on FX eventually loosening as conditions normalize. Initial evidence suggests this may be starting to happen. This will make the pattern of recovery across the global economy critical for FX." 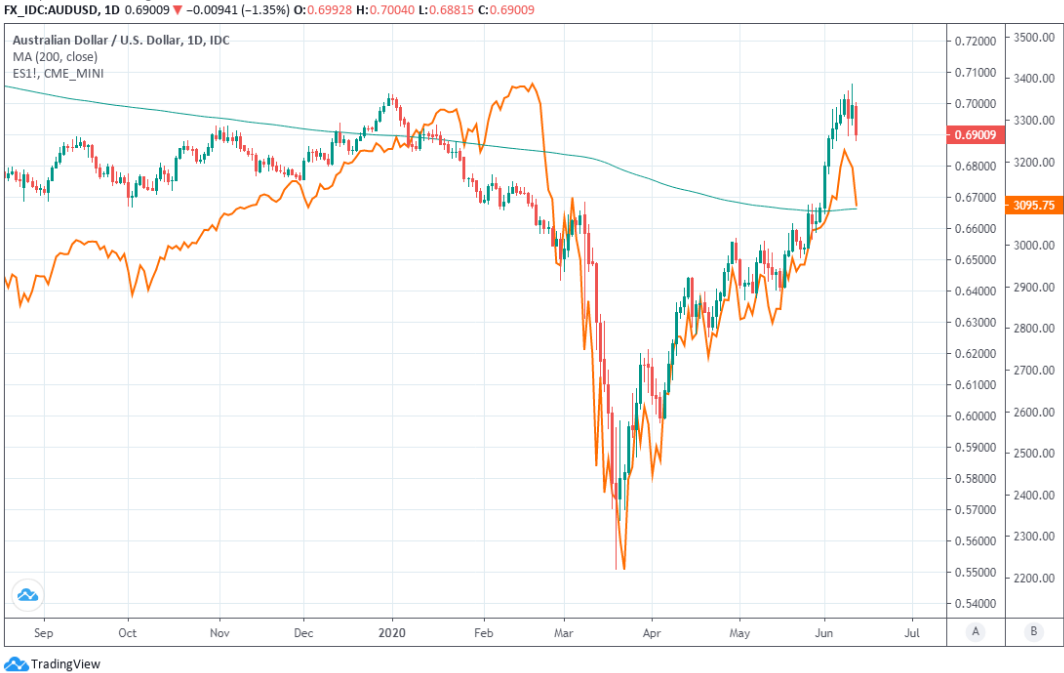 Randol and the BofA team say that as economies exit lockdown more completely and the recovery gets underway, the relative pace of that rebound will begin to matter for currencies and that it would take "US cyclical underperformance" to sustain the recent three-week trend of Dollar weakness. Relative economic growth expectations were the dominant driver of exchange rates before the coronavirus came along, and the U.S. was leading the field, hence the strong Dollar of 2018-to-2020.

But with economists divided over the outlook while comparisons of progress are made difficult by variations in the support measures in place across economies, it remains to be seen which countries will lead the global economy out of the coronavirus trough. The U.S. labour market produced a shock 2.5 million increase in new jobs during May, marking the beginning of a labour market recovery, while the use of furlough and short-time work schemes are muddying the European job market picture for now.

"Absent significant US cyclical underperformance (not our baseline), we find it hard to rationalize a bearish long-term USD outlook," Randol says. "We have serious doubts about the sustainability of the recent USD decline absent clarity on the longer-term pattern of recovery across the global economy, and particularly given the surge higher in relative US growth in recent quarters.. Even if the US growth advantage plummets to zero (from nearly 3% in 1Q), rate differentials are not justified below current levels." 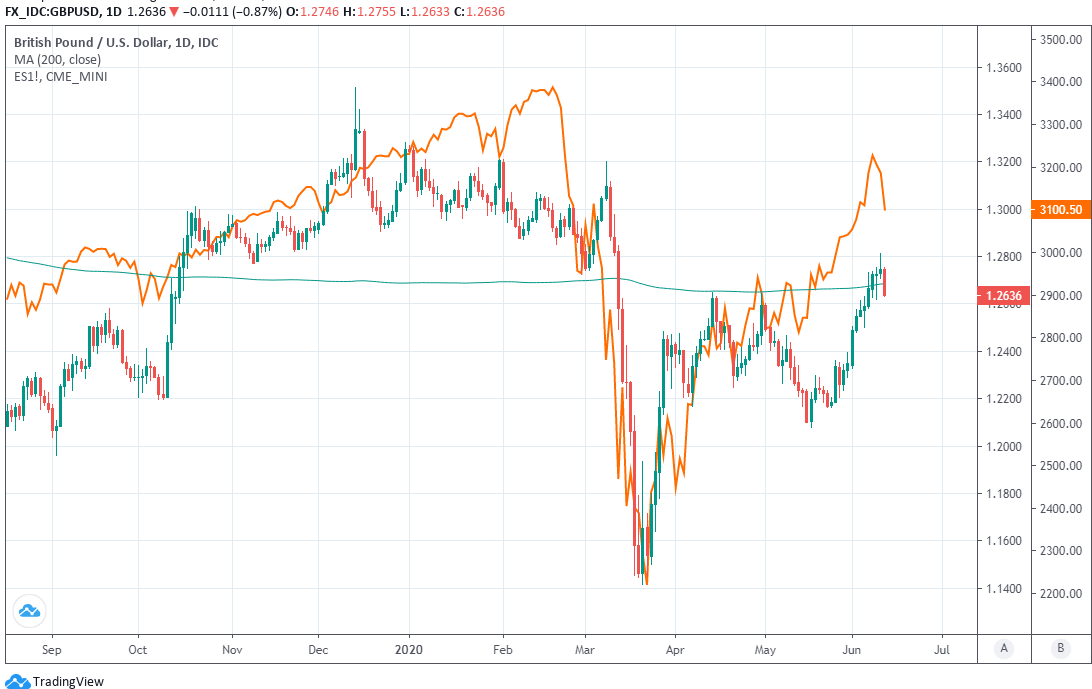 Relative rates of economic growth impact the expected levels of bilateral interest rate differentials, or the difference between two countries' 'forward swap rates,' which can be a powerful influence on currencies. Randol has observed that Pound Sterling, the Aussie and Canadian Dollar are becoming more responsive to changes in those rate differentials, which has been reflected in a rising "beta coefficient" with them that suggests traditional fundamentals are beginning to matter more for markets.

This could be bad news for the Pound-to-Dollar rate because the UK still lags many of its developed world counterparts in exiting 'lockdown' even if it has closed the gap with them, and has a services-heavy economy so may have been more greatly impacted by restrictions on business activities and movement than other countries. Such an orientation of the market would risk seeing Sterling's losses snowballing into the weekend if Friday's GDP data for the month of April is worse than feared.

"Toppled statues, criticisms of the UK's COVID-19 response and dire expectations for the economic hit have been the main British headline grabbers this week. Attacks on the UK government are getting more intense as the end of the Brexit transition period approaches. We continue to think Brussels and the UK will reach an agreement covering merchandise trade, but prefer to wait for better levels before buying the GBP," says BMO's Gallo.

BofA Global Research looks for the Pound-to-Dollar rate to fall back to 1.16 this summer and to remain biased toward that level for months before a shallow recovery takes hold in the final quarter, while BMO Capital Markets looks for a low point of 1.18, also before a shallow recovery that sees Sterling comfortably below 1.25 until earl 2021. oth sets of forecasts imply much steeper losses below Thursday's 1.2664 level.