- Some eye economic rebound and a buy-on-dips GBP.

- And that further GBP gains will be muted in months ahead.

The Pound went from hero to zero Friday when profit-taking saw it hit the bottom of the major currency barrel ahead of the weekend and the outlook for the British currency is as uncertain as ever, with analysts and economists divided on the question of whether to expect further gains ahead or a return to earlier lows.

Sterling soared through the overnight session as it became increasingly apparent that Prime Minister Boris Johnson would win a landslide majority in Thursday's general election, which saw the Conservative Party capture its largest haul of parliamentary seats since the era of Margaret Thatcher. However, the British currency's fortune quickly faded in the final session of the week as it was blighted by profit-taking that's left it testing support on the charts. 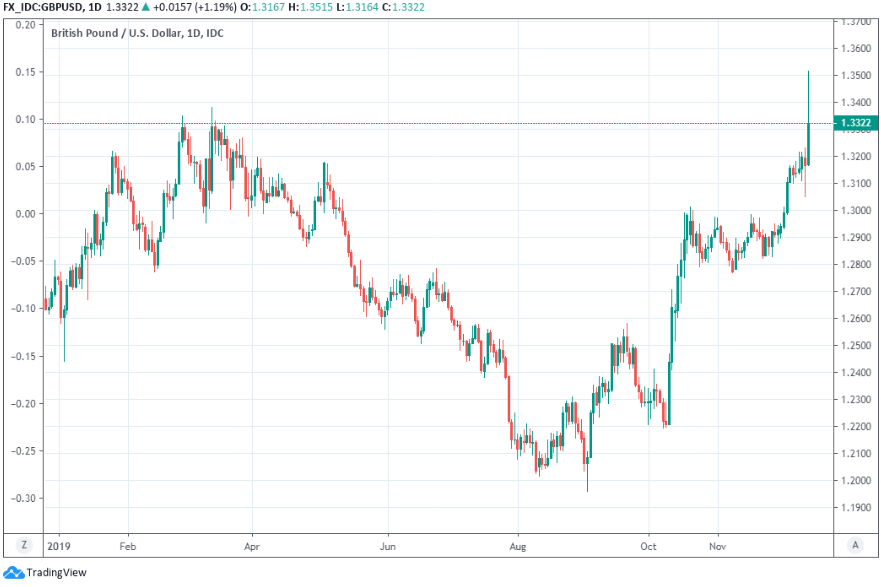 Johnson's win has kept the opposition Labour Party and its leader Jeremy Corbyn from the doors of 10 Downing Street, for better and worse as far as the markets are concerned. Labour's loss means markets will not benefit from a likely Hobson's Choice over EU membership in the party's proposed second referendum, but it also means companies won't have to run the gauntlet of operating in a country ran by an anti-business, anti-free-market and hardcore 'socialist' government.

"Cable has spiked to a fresh 18-month high as sterling's political risk premium has diminished greatly. We see further gains as increasingly fragile as this outcome looks largely priced. In line with this, sterling may well be a buy on dips going forward, but we think we could easily have a meaningful pullback first as sterling looks increasingly stretched against its underlying fundamentals," says Ned Rumpeltin, European head of FX strategy at TD Securities.

The Conservative victory also means Boris Johnson's withdrawal agreement is likely to sail through parliament and that as a result, not only will a 'no deal' Brexit be avoided for at least the short-term but also that some progress may be made in extricating the UK from the EU and progressing toward whatever the future relationship turns out to be. The government will have ample scope to implement its fiscal agenda, which might be positive for the economy, but analysts are growing cautious about the outlook.

"GBPUSD leapt to the 1.3500 area in response to the clearcut Tory majority and sense that the lay of the post-Brexit landscape is beginning to finally clear up, even if uncertainties on the shape of a final trade deal remain," says John Hardy, chief FX strategist at Saxo Bank. "We’re neutral on sterling here and suspect sideways action for some time in broader sterling levels. Any failure below back below the 1.3200 area achieved ahead of the UK election would represent a significant setback for sterling."

Johnson's agreement will see the UK leave the EU but enter a standstill 'transition' period in which all aspects of the current relationship endure with the exception that UK representatives will not be present in any of the EU institutions, while the future relationship is negotiated.

"With Boris Johnson having secured an absolute majority in the General Election, we expect the UK to leave the EU at the end of January. However, negotiations on the future trading relationship will probably be complicated and force an extension to the transition period," says Claudio Wewel, a strategist at J. Safra Sarasin. "While the GBP currently looks overbought, valuation levels appear to be well supported in the long term." 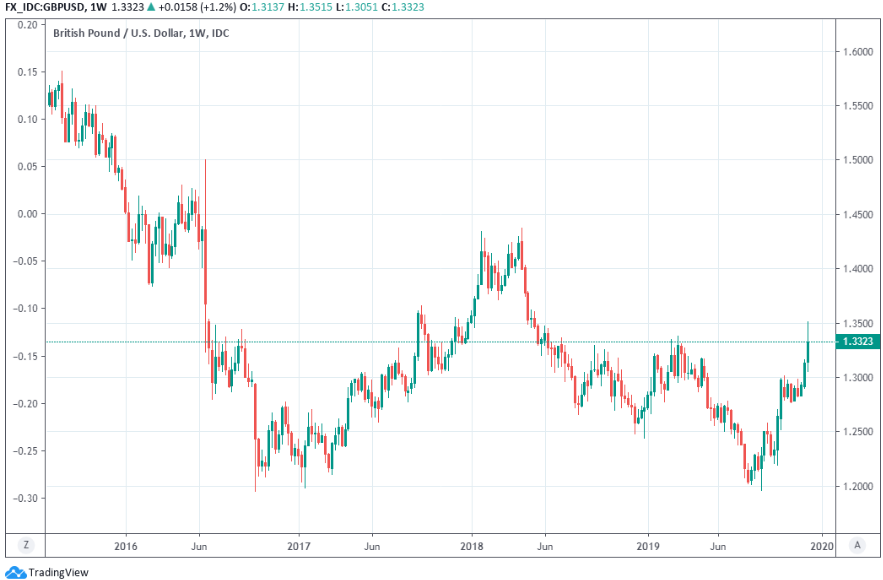 The next negotiations will be carried out with Johnson's revised EU 'backstop' hanging over the country as well as himself. European Commission chief Ursula Von der Leyen said Friday that any agreement on future trade would need to ensure no tariffs and no quotas for goods but also no 'dumping', which is a reference to European demands that the UK adhere to the EU single market rulebook around things like state aid policies as well in a new area; tax policy.

The Commission is concerned about the prospect of the UK becoming an uber competitive 'Singapore on Thames' once outside of and free from the bloc. However, subordination to EU regulatory direction and dictat in the future relationship agreement could prove to be problematic for Johnson.

"GBP gains have stalled as the market was partly positioned for Conservative party victory. We estimate that the market-friendly election outcome had an overall 4% positive impact on GBP.  With GBP not cheap, further gains should be muted," says Petr Krapata, chief EMEA strategist for FX and bonds at ING.