- USD correction likely over as GBP and EUR moves peter out.

- GBP wounded as a divisive and risky Brexit election looms.

- Brexit tailwind now turning to headwind for GBP and EUR.

- Charts also point GBP and EUR lower Vs USD in days ahead.

- And the Fed may struggle to avoid disappointing USD bears.

The Dollar stabilised in the final session of the week after rallies in Pound Sterling and the Euro petered out, helping the greenback to arrest a fortnight-long downward correction, although the U.S. currency is now tipped to recover some lost ground over the coming days.

Pound Sterling's Brexit tailwind from last week is now turning into an outright headwind, with Prime Minister Boris Johnson again pushing for a general election in order to secure a majority for his Brexit proposals in the House of Commons, although his path is being blocked by an opposition that appears determined to have the government abandon its signature policy of delivering an EU exit by October 31. The opposition says it won't back an election until a lengthy Brexit delay is secured.

Just days ago it looked as if the UK would depart the EU this month in a manner that both averted the threat of a 'no deal' Brexit for several years more and that also advanced the process sufficiently enough to provide a semblance of certainty to businesses about the UK's trade arrangements in the short-term. That had boosted Sterling and the Euro, which both account for near two thirds of the Dollar index, and pushed the greenback lower but an imminent, divisive and risky election has changed things.

"The USD downtrend has started to fade as the market is unwilling to price in a more protracted Fed easing cycle (we also don’t expect the Fed to pre-commit to large cuts) while the latest comments from Vice President Pence on China’s role in Hong Kong increased caution related to the prospects of the US-China trade deal. With the positive impact on risk sentiment from hopes for an imminent and orderly Brexit resolution fading, the dollar losses should stall too, says Petr Krpata, a strategist at ING. 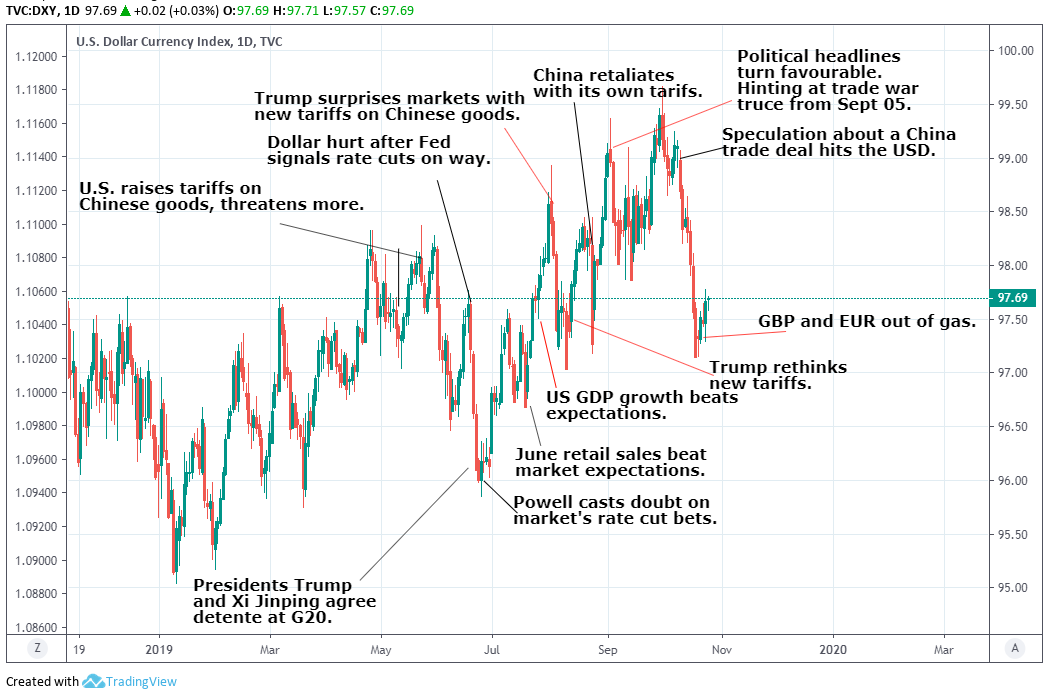 What happens next for the Pound, and to a lesser extent Euro, depends on the length of the Brexit delay granted by the EU and how it's interpreted by markets. A short delay may mean opposition MPs are inclined to back Boris Johnson's agreement, enabling a 'no deal' exit to be avoided and progress to be made, but it might not. And a long extension would facilitate a general election, which would mean more delay and uncertainty for the economy.

"An extension is positive; a shorter period would rule out an immediate general election and instead the government would most likely bring back the Withdrawal Agreement Bill to Parliament. The decision is deferred until Tuesday, when Parliament votes on whether or not to vote for a general election. My view remains the EU will end up offering a 'flextension', which means a painful grind through to a general election," says Rory Manley, an FX salesperson at UBS.

Uncertainty looks to be the order of the day with the Pound and Euro in Europe, both political and economic, which is rarely conducive to upward movements in non-safe-haven currencies. Meanwhile, analysts are increasingly suggesting the Federal Reserve (Fed) may struggle to avoid disappointing a market that's bet heavily on a large number of rate cuts being delivered in the near future. Markets have fully priced in a cut next Wednesday and two more after, in 2020. 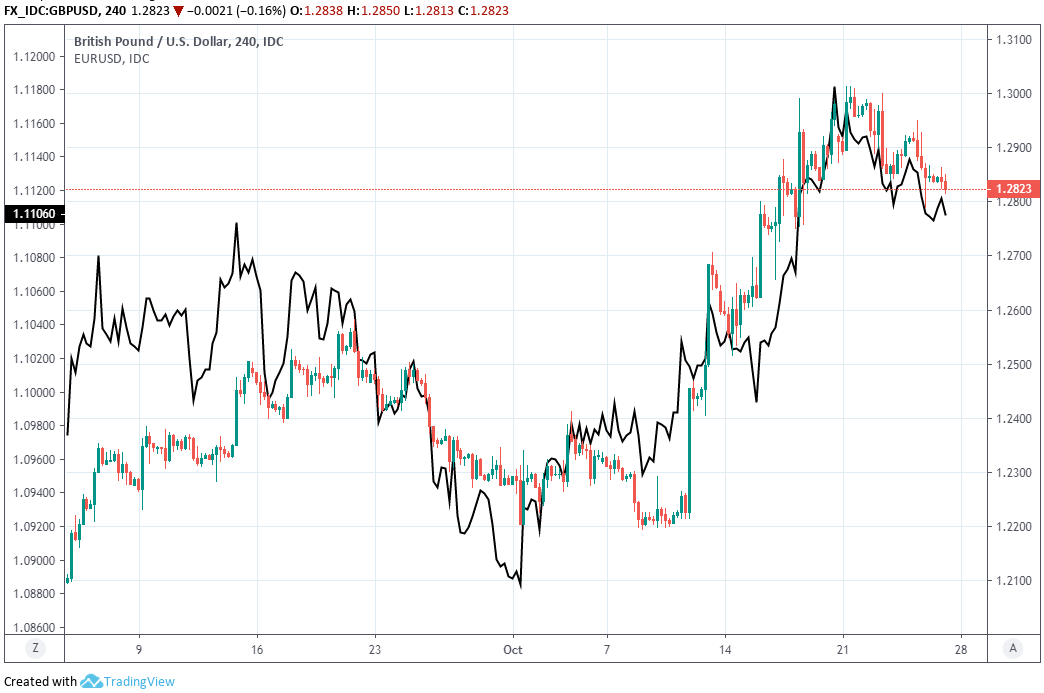 "GBP and EUR have been the largest contributors to USD weakness this month. We think these currencies have had their day in the limelight as peak optimism has passed over Brexit," says Mazen Issa, a strategist at TD Securities. " We are inclined to believe that 1.28 supports fail to hold. Even though the risk of a No Deal Brexit appears to have dropped in recent weeks, the uncertainty over Brexit and election should take the shine off of GBP."

Issa says the Pound "should be trading closer to 1.2650" against the Dollar and that next week investors' attention will revert back to market pricing of Fed rate cuts. Current positioning means that even if the Fed does cut next week, the Dollar could still embark on a renewed offensive if the bank neglects to sufficiently assure investors of more to come in the months ahead. And with European currencies now mired in political or economic uncertainty, that could be enough to herd investors toward the greenback.

"There is some speculation that the Fed could even stand pat, and if realized, that would undoubtedly leave USD risks skewed topside going into the meeting. We do not think the Fed is willing to disrupt financial markets at this point, but it does animate the risks around going into the meeting," Issa says, in an earlier note to clients. "1.12 should be firm resistance for EURUSD." 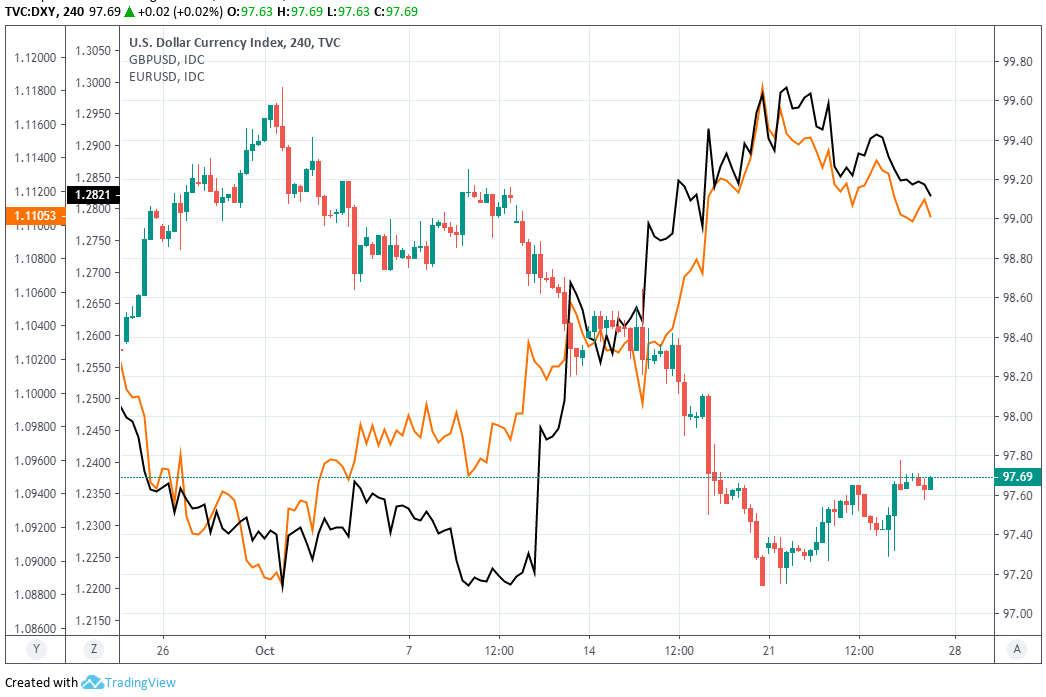 Many analysts say it would take a pre-commitment to further cuts from the Fed, as well as signs of economic recovery in places like the Eurozone, to sustainably turn the Dollar lower. But Vice Chair Richard Clarida said last week the FOMC will continue to make decisions on a meeting-by-meeting basis. He also emphasised that "muted inflation pressures", weak global growth and signs of a slowdown in the U.S. were behind the July and September cuts.

"We remain bullish the US dollar over the shorter term. We expect USD appreciation against EUR and most currencies into year-end, though we continue to see USD/JPY simultaneously moving lower. The dollar is overvalued, but we think a relatively strong cycle and unresolved global tensions can keep it on a rising path. As 2020 unfolds, a potentially less threatening global backdrop could ultimately lead to USD softening," says John Shin, a strategist at Bank of America Merrill Lynch. .

The Fed says it'll respond proactively to risks that threaten its outlook while policymakers have repeatedly asserted that they'll act to "safeguard the expansion", and the manufacturing sector has struggled increasingly in the third quarter. Moreover, the Federal Reserve Bank of New York 'nowcast' points to sharp slowdown in the final quarter, which might be enough to seal the deal on an October rate cut but subsequent policy moves could depend more on U.S.-China trade and Brexit developments.

"Markets have become somewhat more upbeat on hopes that the US-China trade war, as well as Brexit, will avoid worst-case scenarios," says Bank of America's Shin. "We remain cautious, especially as we approach the APEC summit towards the end of November, where any progress on trade talks could become clearer. Consequently, as we head into next month, most of our core macro forecasts have remained the same."