- Further gains may be dependent on deal's approval

The GBP/USD exchange rate has continued its barnstorming rally higher after the news that UK and EU negotiators have finally agreed a new Brexit deal, but can it clear the key 1.30 hurdle? We look at the evidence.

The EU and UK reaching agreement is of course only half the story, it now falls on the UK's notoriously divided and partisan Parliament to pass the agreement that would see the UK ease out of the EU in an orderly and managed manner.

The question now is how much higher can it go?

"If the House of Commons vote in favour of the deal, GBP/USD can rally towards 1.3500 over the medium term because the risk of a hard Brexit on 31 October would be avoided and the UK will enter a 21‑month transition period to facilitate an orderly withdrawal from the EU," says Elias Haddad, a foreign exchange strategist with CBA.

Even in the event that a deal fails to pass through Parliament, Haddad believes Sterling should remain relatively well supported.

"GBP/USD will trade firmly and stabilise around 1.2800 if Johnson fails to get a majority in the UK House of Commons because the risk of a disorderly no‑deal Brexit next year will be low. Johnson will probably use the Brexit deal reached with the EU as the Conservative’s Brexit platform instead of campaigning on a hard‑Brexit platform in upcoming general elections," says the strategist.

Joe Perry, an analyst at brokers Forex.com, says the next major level is at the 1.3000 ‘psychological resistance’ level.

1.3000 is likely to act as an obstacle because it is a level where investors holding bullish bets are more likely to take profit and close their positions. This increases ‘supply’ at the level and leads to the market pausing and going sideways.

If Cable can successfully break above 1.3000, however, there is little in the way of further resistance preventing major gains. 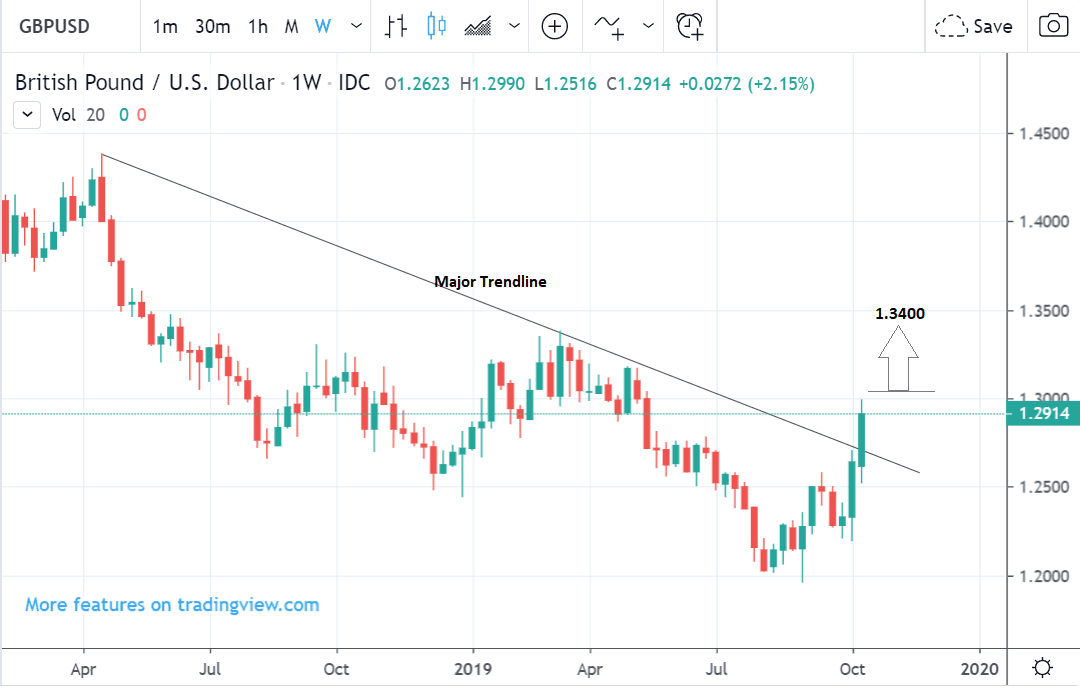 The pair has already given a substantial bullish signal after breaking clearly above a major trendline at circa 1.2700.

It has now also broken above "a large confluence of resistance" in the 1.28s.

For the pair to break 1.3000 and go all the way up to 1.3400 it would probably require further confidence that the agreed deal was ‘watertight’.

Added confidence would come from a vote of approval by the UK parliament, probably on Saturday, however, such an outcome is far from assured as it is not clear the Conservatives allies, the DUP like the deal, and at last mention on Wednesday they said they would not support it.

It is also not clear whether Brexit MPs in the ERG and the opposition Labour party will vote for the deal.

If the government fails to get parliamentary approval the Pound will probably pull-back down again as the Brexit merry-go-round goes for another spin.