- Pound to be moved by Brexit news

The GBP/USD exchange rate is trading at 1.2644 at the start of the new week after rising 2.54% in the week before. Studies of the charts suggest the pair is at an important crossroads with further upside dependent on a clear break out of the down channel.

However, Brexit headlines will continue to be the primary driver of Sterling and therefore we expect substantial volatility.

Traders will watching the EU Council summit that runs from Thursday 17th to Friday 18th to see whether a Brexit deal can be struck between the EU and UK.

The Pound surged on reports last week that the two sides were getting closer to agreeing a deal; if they finally reach an agreement the gains will likely continue.

A failure to agree a deal would however probably see the Pound give back some, if not all, of its recent gains as the future of Brexit and UK politics are once again thrown up in the air. Therefore, the promise of volatility over coming days is high and we warn against complacency.

Of course, achieving a Brexit deal between the UK and EU is only half the equation: that deal must then be voted through Parliament on Saturday's sitting.

Numbers are extremely tight, and all Prime Minister Boris Johnson's allies, and some opposition party MPs must vote for the deal if it is to pass and finally put the uncertainty of the past three years to bed.

We will be waiting news through the course of the week as to whether Northern Ireland's unionist DUP - key allies of the Conservative government - will back a new deal based on its provisions for the Northern Ireland border. We feel if they are on board then most of the 'Brexiteer' MPs that voted against Theresa May's deal could come on board too.

A rejection by the DUP would almost certainly leave any deal that comes back to Parliament 'dead in a ditch', as the saying goes.

This would be a significantly negative turn of events for Sterling and readers should be aware that such a headline could come through at any point during the week.

If we were to strip out the Brexit imponderables and looked at the GBP/USD from a purely technical perspective, we can see potential for the exchange rate to go as high as 1.30.

The 4 hour chart - used to determine the short-term outlook, which includes the coming week or next 5 days - shows how the pair has risen up to the top of its falling channel. 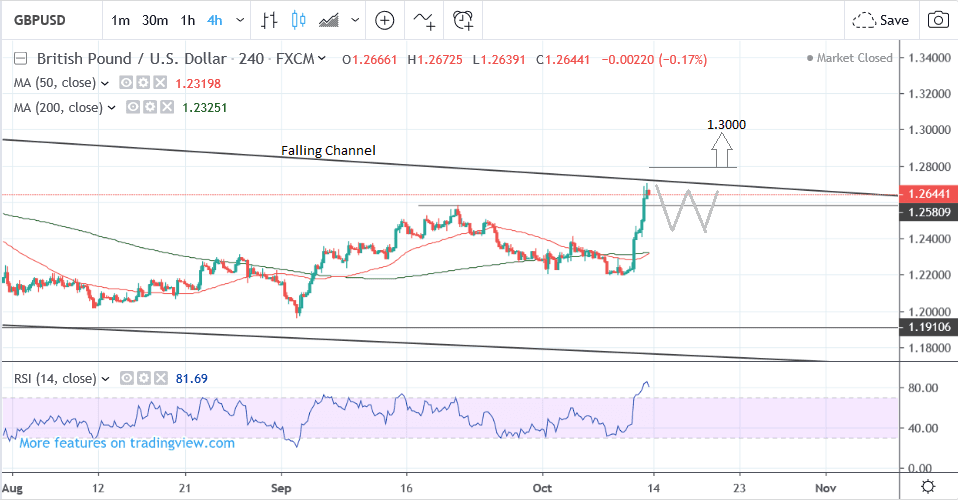 If the strength of the recent up-move is anything to go by, there is a good chance it will breakout higher: a move above 1.2800 would help provide confirmation for a break with an initial target at 1.3000.

Alternatively, there is a possibility that the pair will not be able to breakout and will remain trapped within the declining channel, probably initially finding support at 1.24 or 1.25.

The RSI momentum indicator is in the overbought zone suggesting an added risk the pair may either pull-back or go sideways, although on its own it is not enough to indicate a reversal of the trend from bullish to bearish.

The daily chart shows how the pair has risen up to the top of the long-term falling channel and also the 200-day moving average (MA) at 1.2711. 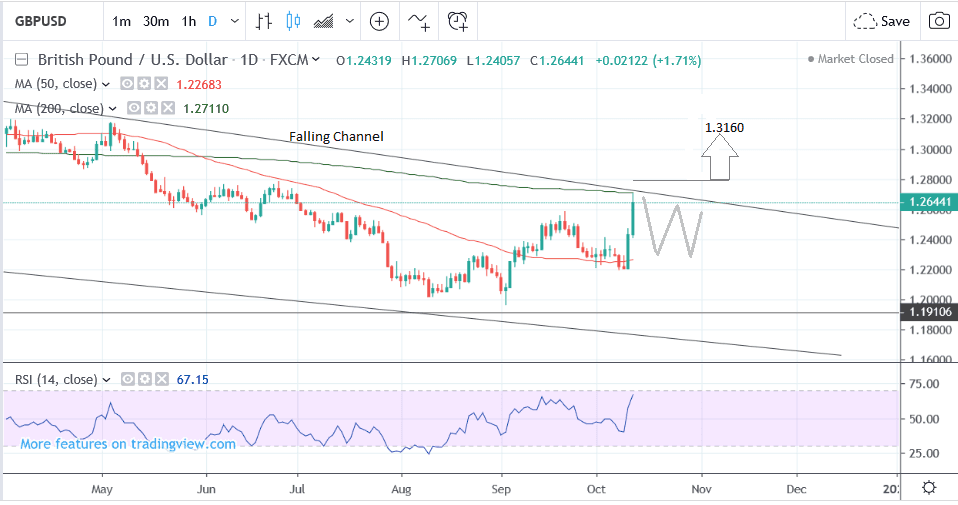 These are likely to present a tough resistance duo capping further gains, making it difficult for the pair to break clearly out of the channel.

A move above 1.2800 would, however, provide strong confirmation for a continuation higher to a target at 1.3160 in the medium-term.

Alternatively, it is also possible the pair might find resistance at the top of the channel as too tough to break and fall back down inside the channel.

The weekly chart shows how the pair has been falling long-term in a downtrend. In the last week, however, GBP/USD rose up strongly to the top of the channel, and given the strength of the recovery there is a possibility it could breakout higher. 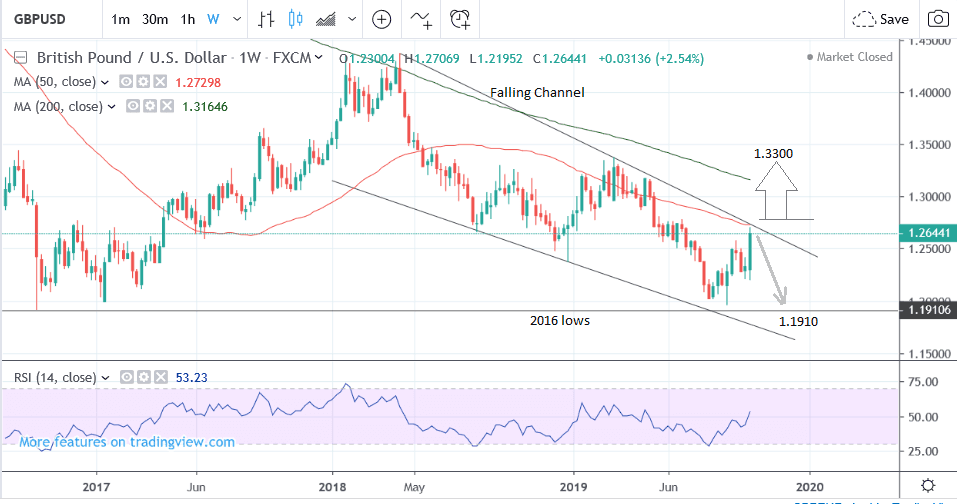 As stated before, a break above the key 1.2800 level would lead to a continuation - in the long-term - up to a target at circa 1.3300, possibly even as high as 1.3500. This is based on the height of the channel extrapolated higher, a common method for deciding the extent of potential upside breakout for a pair.

Yet at the same time, given the old adage that ‘the trend is your friend’, there is also the possibility the pair could pull-back from resistance at the upper border of the falling channel and simply extend the longer-term dominant trend lower.

Such a move would probably see a move down to the 2016 lows which are a major historic level, touched many times and, therefore, of significance for the pair.

UK Week Ahead: Data to Watch.

Labour market data is expected to show the unemployment rate remain at a historic 3.8% low, 23k new jobs added in September, and average earnings (plus bonus) rise 3.9%, when data is released on Tuesday at 9.30 BST.

If the actual data comes out in line with expectations the Pound will remain supported.

Inflation data is expected to show a 1.8% rise in September, when released at 9.30 on Wednesday, from a prior 1.7% yearly increase, which would be about in line with the Bank of England’s target.

A substantially lower result would start to see inflation creep below the target zone and increase expectations of the BOE cutting interest rates, leading to a weaker Pound.

Lower interest rates are negative for the Pound since they tend to attract lower foreign capital inflows.

Despite high inflation being seen as an economic bugbear, higher inflation would support the Pound, since it would probably reflect stronger consumer demand which is indicative of a better growth outlook.

Retail sales is forecast to show a 3.2% rise on a yearly basis and a 0.1% increase on a monthly basis when data is released on Thursday at 9.30 BST.

The main release for the U.S. Dollar in the coming week is probably retail sales data out on Wednesday, with the impact of news from U.S. and China trade talks at the end of last week also potentially moving the currency.

Retail sales is expected to show a 0.3% rise in September from 0.4% in August on a month-on-month basis, when data is released on Wednesday at 13.30 BST.

Core retail sales ares expected to rise 0.2% from 0.0% in the previous month.

The results could be important for assessing the impact of the U.S. economic slowdown on consumers who have so far stayed immune and given cause for optimism.

If retail sales come out lower-than-forecast it could suggest the slowdown is also seeping into the consumer space raising more serious alarm bells for the outlook. This would also have a more pronounced bearish impact on the U.S. Dollar.

At the same time, the data may lose some of its importance due a generally more upbeat outlook for the U.S. economy after the trade deal struck at the end of last week between the U.S. and China.

The deal was basically a trade off between the U.S. agreeing to delay the implementation of higher tariffs on Chinese imports on October 15 in return for China agreeing to purchase of US agricultural goods. Also part of the deal were some intellectual-property and currency measures and access for US financial services.

The agreement will take the edge off global growth concerns and potentially support the U.S. Dollar. The extent of the support is difficult to guess because the U.S. Dollar is also a safe-haven currency which gains support when the outlook for the global economy is negative - so there is also a risk the two may cancel each other out and it may have zero effect in the end.