The Dollar was lower in a risk-on market Wednesday but is tipped to firm and then remain bid over the coming weeks as global risks remain elevated and because the Federal Reserve (Fed) at least appears unconvinced of any need for further interest rate cuts in the short-term.

America's greenback was lower and so-called risk assets higher after the Fed said it will soon take action on mechanical faults in interbank money markets that have created institutional funding pressures in recent weeks, and that have already led to interventions from the Federal Reserve Bank of New York. The proposed actions will reverse another set of measures that had put pressure on non-Dollar currencies last year while also boosting the greenback.

"Powell did not specify how many bills the Fed will buy in order boost bank reserves sufficiently to remove the strain in funding markets, but we'd expect to see something of the order of $500B," says Ian Shepherdson, chief economist at Pantheon Macroeconomics. "We understand why Mr. Powell wanted to "…emphasize that growth of our balance sheet for reserve management purposes should in no way be confused with the large-scale asset purchase programs that we deployed after the financial crisis", but any permanent increase in reserves beyond the rate of nominal GDP growth is an easing of monetary policy." 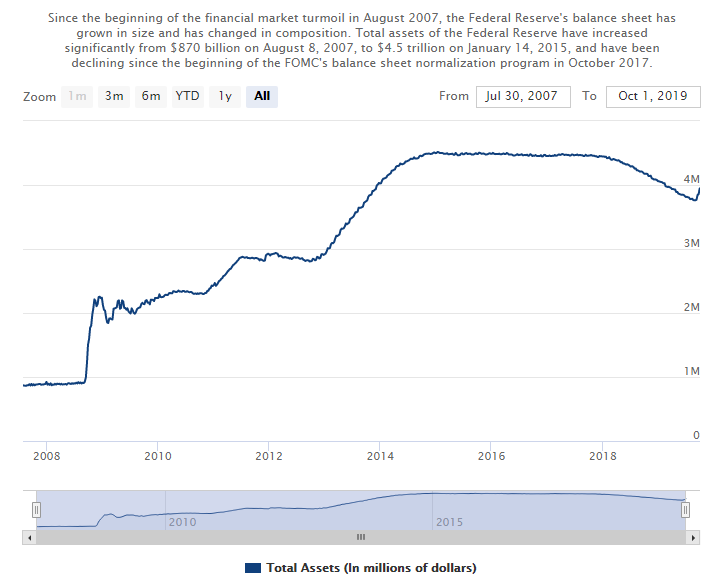 The Fed had in the final quarter of 2017 began reversing the 'money printing' response of the crisis years by slowly taking back what it spent on government bonds as part of those efforts. But the 'balance sheet unwind' left the international financial system with a shortage of Dollars, which roiled financial markets that are sensitive to changes in the supply and cost of the greenback particularly developing economies, and lifted the Dollar in the process.

This year that Dollar shortage, in a roundabout way, began to cause ructions in some obscure U.S. markets and initially led the Fed to stop shrinking its balance sheet. But the bank went a step further Tuesday when Powell said it'll soon resume buying government bonds on a regular basis to ensure there's enough Dollars for those parts of the financial system to function effectively.

Put differently, the Fed had stopped reinvesting or re-lending the money returned to it by the government, in an effort to draw a line under a crisis policy response that was effectively a big monetary experiment. Instead of reinvesting, the Fed was cancelling the Dollars returned to it, but it now has to stop doing that. The bank will instead resume reinvestments, with one implication being that it may never be able to truly get its money back from the Treasury. 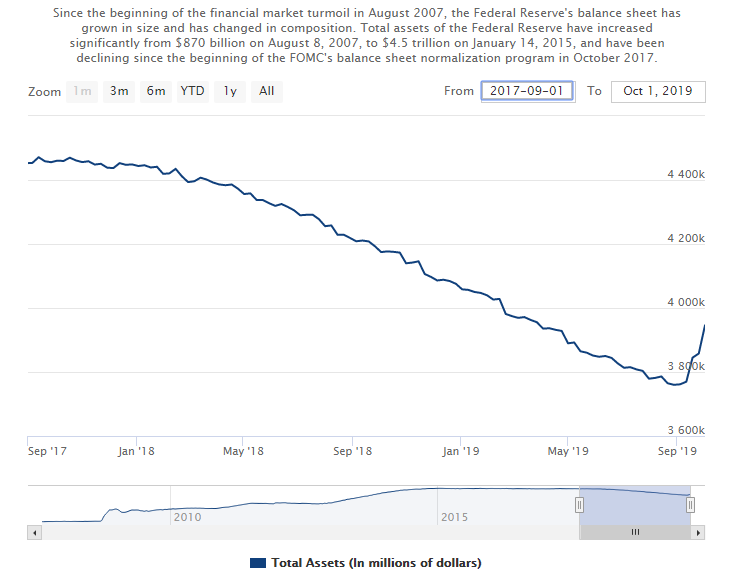 Above: Fed balance sheet shrinks as 'unwind' process gets underway.

"We think the broad value of the USD is trading weaker primarily because of the manner in which FX investors have digested Powell's remarks from late Tuesday. The timing of the announcement of a Bill-buying program may have been a surprise to many," says Stephen Gallo, European head of FX strategy at BMO Capital Markets. "FX investors should be cautious with their long-USD exposures for the time being. It looks like the focus for the rest of the week is going to be on US/China developments."

There's still much that is yet to be determined and it wasn't only the government that the Fed effectively loaned money to. The central bank also bought part of the mortgage market by picking up mortgage-backed-securities (bonds) alongside Treasuries, indirectly loaning money to home buyers too.

Nonetheless, the decision is a win for the global economy as well as for the U.S. This and analyst suspicions the bank is actually embarking on a fresh but covert quantitative easing program could explain why the Dollar sold off against risk currencies, while climbing relative to so-called safe havens on Wednesday. But some say the U.S. currency should firm up and remain 'bid' over the coming weeks due to the outlook for interest rates as well as the trade war.

"Expect more tough rhetoric between US & China ahead of tomorrow’s trade meeting and tonight also sees the release of Sep FOMC minutes. The Dot Plot already tells us there was much dissension over the 25bp cut, but poor US data since that meeting suggests it will take a lot to shake the market from its conviction (now 83% priced) that the Fed cuts again Oct 30th. Expect the dollar to stay bid against activity FX," says Chris Turner, head of FX strategy at ING. 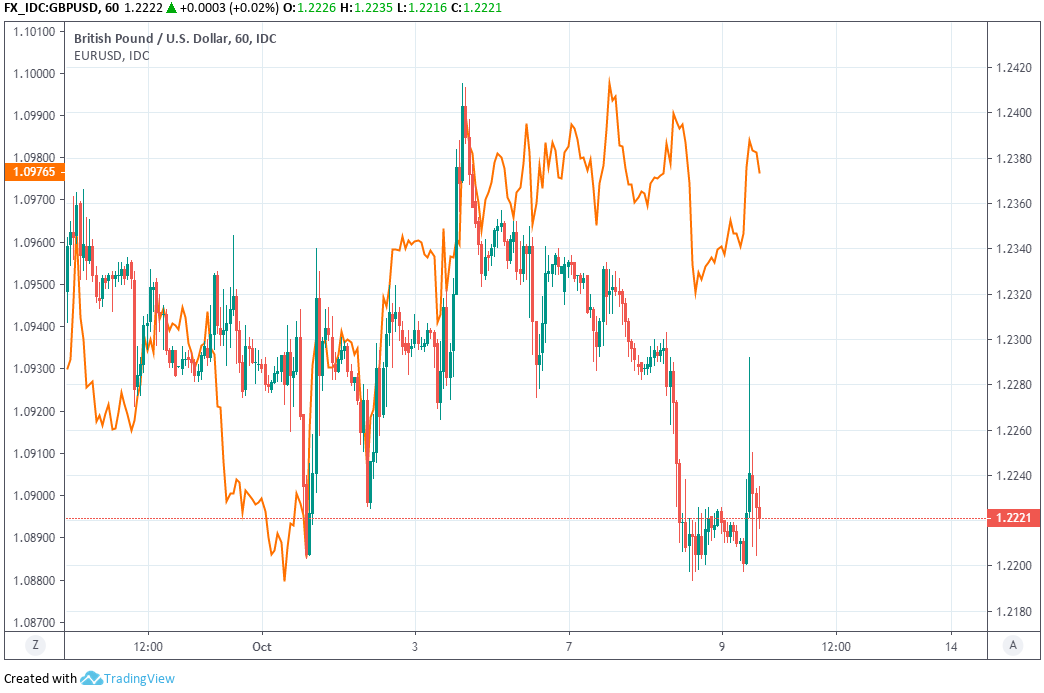 Fed Chair Powell came across unconvinced Tuesday that there is any need for further rate cuts in the U.S., despite a duo of Institute of Supply Management (ISM) surveys released last week that showed manufacturing output hitting a decade low and troubles in the factory sector spilling over into the broader economy. Those surveys led markets to wager heavily that the Fed cuts rates this month for a third time to protect the economy.

Powell said nothing to vindicate the market's bets on Tuesday. He simply reiterated the Federal Open Market Committee view that a "sustained expansion of economic acitivity" is most likely, alongside a strong jobs market and inflation that "near" the supposedly symmetric 2% target. However, he did also say the bank would remain "data dependent", which means bad economic figures between now and month-end could yet push the bank into another rate cut.

"Fed asset purchases aren't QE if all they buy are short-dated Bills, whereas the ECB's resumption of asset purchases, really is QE. Knee-jerk dollar softness in response to Jay Powell's comments yesterday may allow EUR/USD to pop its nose back above 1.10. But that may provide an opportunity to go short," says Kit Juckes, chief FX strategist at Societe Generale.

Another factor to dictate the direction of Dollar exchange rates in coming days will be developments in trade talks between the U.S. and China, which are set to get underway on Thursday with Chinese officials negotiating while under a barrage of new hostile U.S. sanctions measures. The White House has blacklisted some Chinese companies this week and issued visa bans to some officials in response to allegations of human rights abuses in Xingjiang. 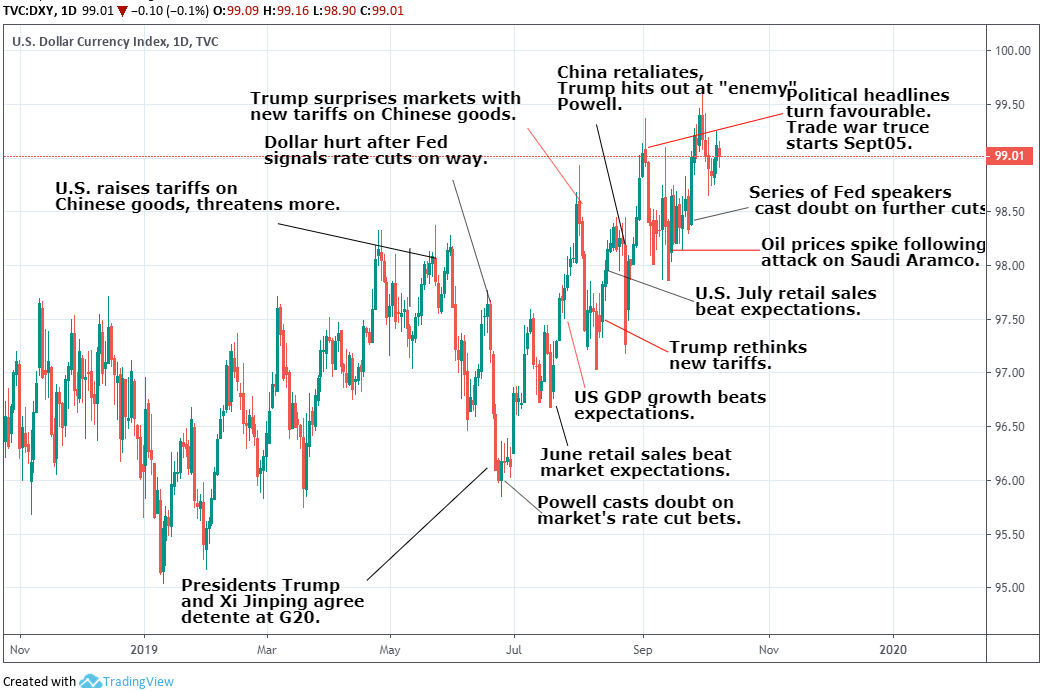 "We repeat our long-held view that there will be no substantive trade deal because this is NOT about trade; indeed, the US-China issue has moved from don’t-care Wall Street to do-care Main Street via the NBA – which is now banned in China after its president underlined he stands behind free speech. As one Chinese internet user notes: “US-China contact began via ping-pong, and ended with basketball,” says Michael Every, a strategist at Rabobank.

Hopes of a deal that averts two U.S. tariff increases planned for October 15 and December 15 had already been fading even before the visa ban and blacklistings, after Chinese officials said they're willing to do a deal that covers only areas where there is broad agreement. President Donald Trump wants a deal that covers all bases and might resort to lifting tariffs if he doesn't get one.

The two sides have been warring with tariffs and other measures for almost 18 months and on December 15, substantially all of China's U.S-bound exports will have been covered by tariffs if an agreement is not reached by then. That would be bad news for already-slowing economies across the world, but particularly those in Europe, which have arguably been hurt by the trade war more than either of its two protagonists.

"The risk of things going wrong (or stalemate) is higher than the riks of things going really well," BMO's Gallo says. "This leaves use rather neutral on EUR/USD and USD/CNH in the short run. We'd much rather be buying USDs on both axes north of 1.10 [EUR/USD] and at 7.10 [USD/CNH], respectively, until something changes our minds."