The U.S. Dollar has already reached 29-month highs and it could go even higher due to 5 main investment themes, says Quentin Fitzsimmons a portfolio manager at T. Rowe Price.

The first of these is interest rates: the Federal Reserve (Fed) is widely expected to cut interest rates in the future which in ‘currency trading 101’ is usually viewed as a negative risk factor for the U.S. Dollar.

This is so because lower interest rates are less of a draw to foreign investors looking for somewhere to park their money.

In actual fact when you look at the past performance of the U.S. Dollar during previous rate-cutting cycles it has risen on 3 out of the last 4 occasions, says Fitzsimmons, dispelling the myth that interest rate cuts are always detrimental to a currency.

The implication is that if the Fed goes ahead and cuts again the Dollar may not weaken as a result. 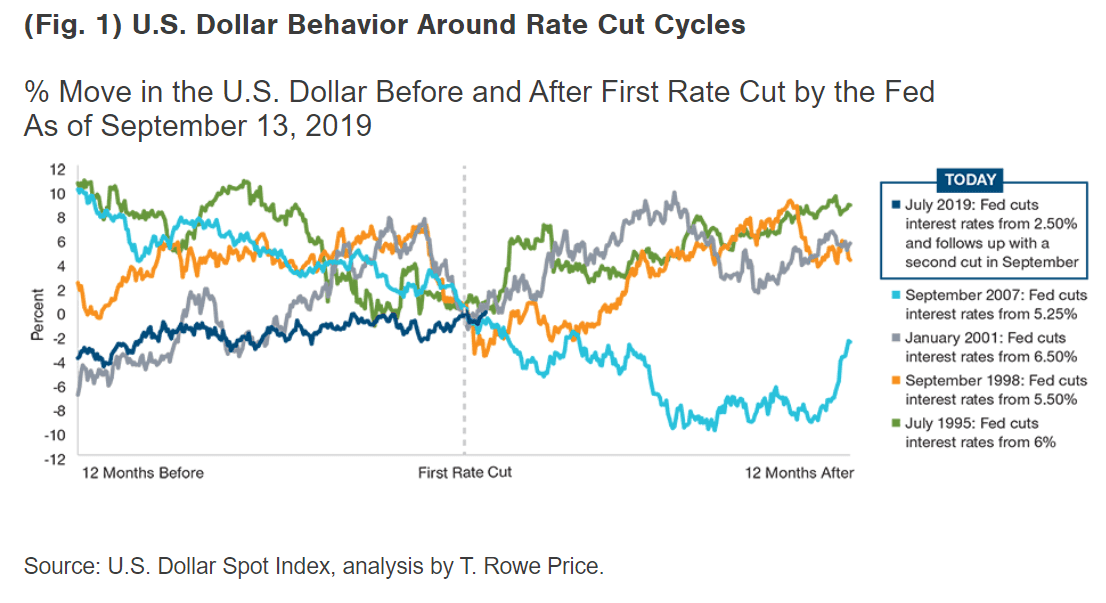 A second theme is U.S. economic growth and how it impacts on the Dollar.

Here, the most important factor is how U.S. growth compares to economic growth in major counterpart countries like the Eurozone.

The growth differential is actually more of an influence on the U.S. Dollar than growth itself and these differentials are signalling more upside potential for the currency.

The U.S. economy may be backsliding, says the portfolio manager, but as long as it is outperforming the Eurozone, EUR/USD will remain at current low levels.

The third factor supporting the U.S. Dollar is the ‘carry trade’ which is a trading strategy which involves borrowing a currency from a jurisdiction where interest rates are low and employing that capital to buy a currency with a higher interest rate.

The U.S. has a base interest rate of 2.00% which is much higher than the Euro-area where the European Central Bank (ECB) has set the base rate at 0.0%.

Indeed U.S. rates are higher than in most other G10 countries making it an attractive carry buy. This increases demand and actually supports the exchange rate.

Sometimes the carry trade is conducted using assets such as bonds instead of brokerage or bank accounts.

In such a scenario the carry trader - normally institutions - might be able to borrow a loan in Euros for next to nothing and use it to buy U.S. Treasury Bonds with a yield of 1.59%.

One drawback to carry trading, however, is that it is currently very expensive to hedge U.S. assets against the currency risk of a depreciating Dollar. This may reduce demand in the future.

“On the surface, for example, U.S. 10‑year Treasuries appear much more attractive than 10‑year German bunds, but that yield advantage effectively disappears if the cost of hedging dollars back to euros is taken into consideration,” says Fitzsimmons. 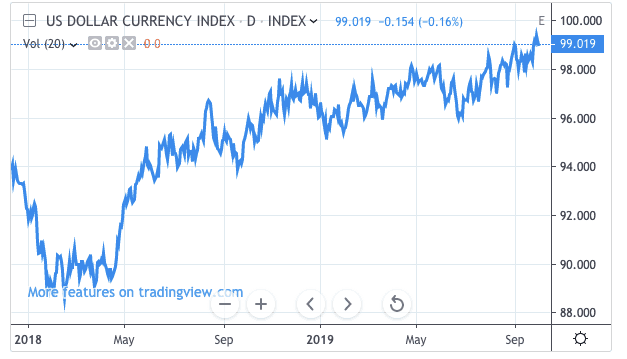 Above: The Dollar Index - a measure of Dollar strength against a basket of currencies - continues to move higher

The fourth factor is tariffs and how they affect currencies.

So far, experience of Trump’s war with China, has shown that the impact of tariffs is actually Dollar-positive or sometimes mixed.

The expected impact would be for the Dollar to rise since increased tariffs on U.S. exports should lower the trade deficit and increase net demand for U.S. Dollars over counterparts.

Whilst this has been true - with the Yuan falling to historic lows above 7.0 U.S. as a result of the trade war - sometimes the impact is merely volatile.

“Chinese authorities recently let the renminbi fall to its weakest level against the dollar in more than a decade but kept its value versus a broad basket of other currencies relatively unchanged. Currencies are increasingly being used as political tools, and as the trade negotiations between the two sides go on, we may not have seen the last of the measures. Against this backdrop, volatility is expected, and perhaps the best way to benefit from this is through the use of currency options.” says the portfolio manager.

A fifth driver supporting the U.S. Dollar is its safe-haven status.

This is also partly why the currency has risen during the insecurity of recent years in which trade tensions have dominated the investment landscape.

“During times of stress, investors flock to the U.S. Dollar - a trend that looks unlikely to change anytime soon,” says Fitzsimmons.