- Pound to be moved by Brexit news; U.S. Dollar by PMIs

The GBP/USD exchange rate starts the new week at 1.2141, after rising almost 1.00% in the week before. Studies of the charts suggest that the short term trend may have reversed, increasing the risks of more upside.

The 4-hour chart - used to determine the short-term outlook, which includes the coming week or next 5 days - shows the pair having recovered from the August 11 lows at 1.2015. 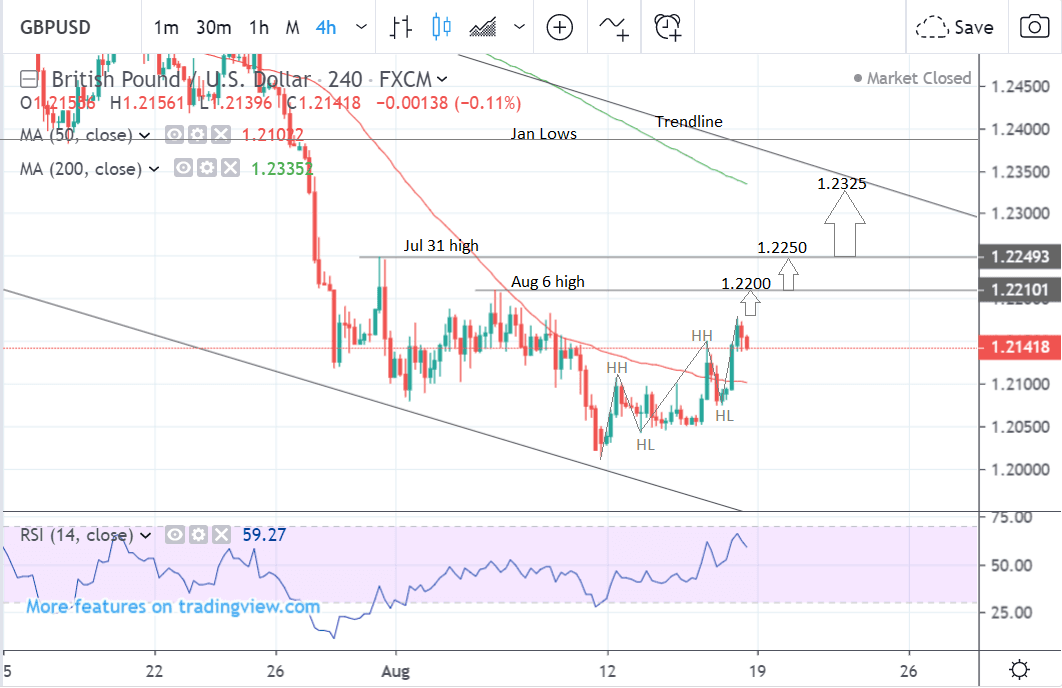 The rebound has reversed the sequence of falling peaks and troughs and completed two new sets of higher highs (HH) and higher lows (HL) which is one of the first indications of the onset of new uptrend. Given the widely accepted principle that ‘the trend is your friend’ the pair may now be biased to further upside.

If the pair can break above the August 6 high at 1.2209, especially on a closing basis, it would provide even more bullish confirmation of further upside.

Such a sign would represent the crossing of a major Rubicon and herald a move up to 1.2250. A really strong advance might even reach the 1.2325 in the short-term.

The daily chart shows how the pair has been declining in a channel. It shows how the current rebound is really just a small recovery within a broader downtrend. 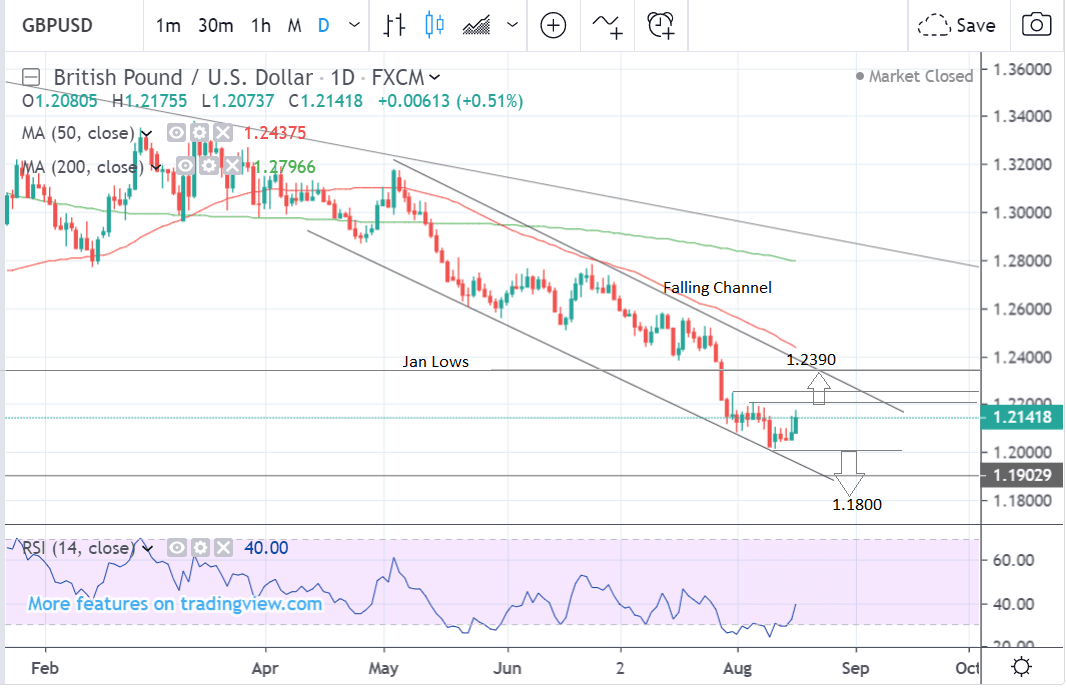 If the pair continues rising over the medium-term it could reach the next major upside target at the 1.2390 January lows.

At the same time, it is clear the pair remains stuck in a downtrend which could still break lower, and a break below the 1.1990 key 2016 lows would provide confirmation of a resumption lower to a target at 1.1800.

The RSI momentum indicator has just exited the oversold region, giving a signal to ‘buy’, according to the inventor of the indicator Welles Wilder. This supports the possibility that the pair is undergoing a short-term reversal to the upside.

The weekly chart - used to give an idea of the longer-term outlook, which includes the next few months - shows the pair falling in a channel within a long-term downtrend. 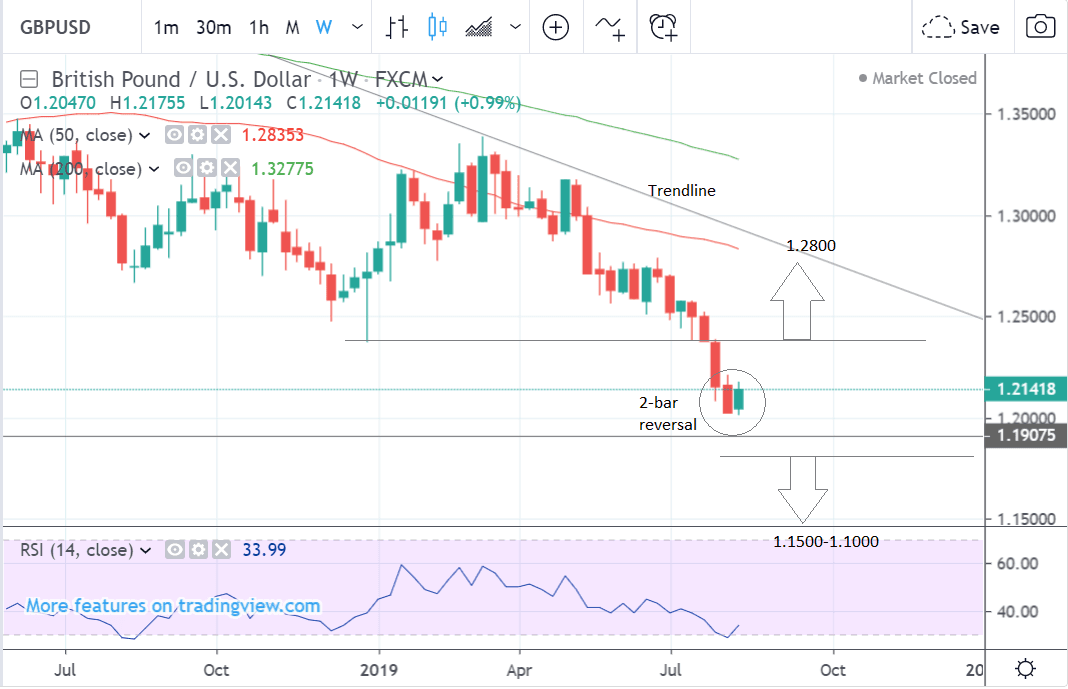 The pair has now formed a bullish two bar reversal pattern at the lows and this is a reversal signal (circled).

These patterns form when a long red down bar is followed by a long green up bar which more or less reverses all the previous period’s losses.

Another bullish sign is that the RSI momentum indicator has just exited the oversold region giving a ‘buy’ signal, as it did on the daily chart.

The two bars of the reversal pattern are a little bit too short to provide a strong reversal signal suggesting bulls should exercise caution in interpreting them.

The downtrend is also fully intact and could still push lower too.

To the downside it could break lower and move down to 1.1500 in the long-term - possibly even lower given the long-term encompasses the Brexit deadline, and given the risk of a no-deal Brexit, which some analysts say could push sterling down to 1.10 or even parity.

The main drivers of the U.S. Dollar in the coming week are the minutes of the previous (July) Federal Reserve (Fed) rate meeting, out on Wednesday, PMI and housing data out on Thursday, Wednesday and Friday, and possible commentary from central bank officials at the Jackson Hole symposium, also at the end of the week.

The minutes of the Fed’s July meeting may be useful in gaining more clarity with regards to the Fed’s stance on future policy but given the yield curve has inverted since their meeting, greatly increasing the pressure on them to cut rates - in order to bring down the front end of the curve - it’s debatable whether they will still be that meaningful.

On the 'hard' data front, Manufacturing PMI is expected to rise 10 basis points to 50.5 in August, Services PMI to fall the same amount to 54.9.

Housing is seen as one of the key litmus tests for the economy, so analysts will want to see whether the recent trend in poor data can be reversed.

The Pound this Week: Politics to Dominate

The main driver of the Pound in the week ahead is likely to be Brexit news.

Currently, the country remains on course for a ‘no-deal’ Brexit on October 31 unless Parliament successfully finds means to instruct the government to request an extension.

There is also a heightened prospect that the Government of Boris Johnson is brought down in a confidence vote.

Talk of a cross-party administration replacing the current government aided a rebound in Sterling last week as it lowered the odds of a 'no deal' Brexit transpiring.

This week we will be looking for further developments on this front, and if it becomes clear there is the prospect for such an administration succeeding we might see further advances in Sterling.

"The sharp depreciation of the British Pound against the Euro in recent weeks has undoubtedly attracted some bargain hunters. However, we expect the usual political mayhem to continue after the summer recess," says Marc-André Fongern, analyst at MAF Global Forex. "The currency is likely to remain particularly vulnerable in the coming weeks as Boris Johnson has repeatedly stressed that Britain might leave the EU without a deal. Boris will be forced to compromise, no doubt about it."

The prospect of a 'care-taker' government replacing the current regime are however slim, as the various parties are splintered in their vision of how such a regime would be run, and what its objectives would be.

Beyond Brexit, other market-moving data could come in the form of commentary from the G7 which is being held between 24-26 of August and which Boris Johnson will attend. The 45th G7 summit will be held in Biarritz, France.

On the data front, the calendar is very light with only CBI Industrial Trends Orders for August. CBI data is considered an invaluable leading indicator for broader growth trends so analysts will still be watching it carefully for signs of whether the -0.2% fall in growth registered in Q2 are likely to extend.