- Fed not yet inclined to indulge market bets on further rate cuts.

The Pound ceded ground to a resurgent Dollar Thursday and is now tipped for a return to its 2016 "flash crash low" after the Federal Reserve (Fed) breathed new life into the greenback when it appeared to suggest it might not cut U.S. interest rates this year as much as the markets were anticipating.

America's greenback hit a 2019 high Thursday, driving Pound Sterling down to a fresh two-year low in the process, after the Fed told markets late Wednesday it will "monitor the implications of incoming information for the economic outlook" while contemplating the "future path" of U.S. interest rates.

However, analysts at ING Group have warned the British currency could now be facing an additional 2% loss in the short term, as markets adjust their outlook for U.S. interest rates and the Dollar corrects higher as a result.

"The Fed’s first 25bp cut of its new mini easing cycle and subsequent comments from Chair Powell failed to match some of the (unrealistic) easing expectations priced in," says Chris Turner, head of FX strategy at ING. "The strong dollar means Cable looks to be en route to the Oct 2016 flash crash low of 1.1840."

....As usual, Powell let us down, but at least he is ending quantitative tightening, which shouldn’t have started in the first place - no inflation. We are winning anyway, but I am certainly not getting much help from the Federal Reserve! 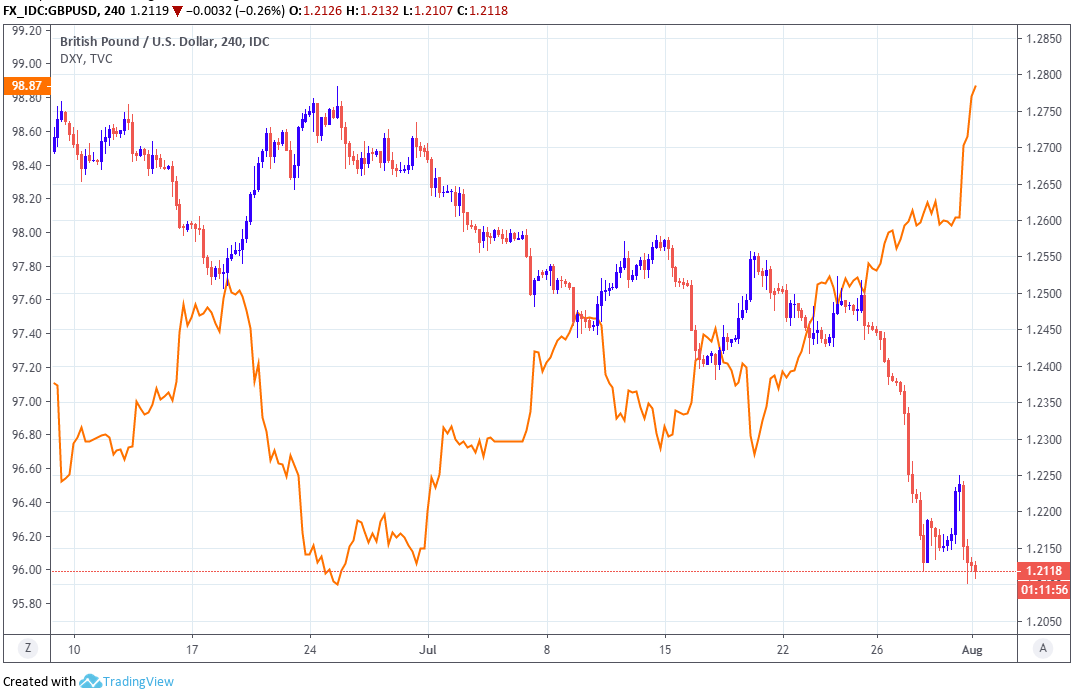 "We believe this is excessive, given the relative resilience of the US economy to-date and recent evidence that suggests inflation may be bottoming out. Barring a marked deterioration in the economic outlook, we expect the Fed to implement at most one more 25bps cut and then to remain on hold,” says Mark Haefele, chief investment officer at UBS Global Wealth Management.

The Fed did cut its interest rate for the first time since the aftermath of the financial crisis on Wednesday, taking the Federal Funds rate range down 25 basis points to between 2% and 2.25%, but two of the 17 voters on the Federal Open Market Committee (FOMC) opposed the move.

It also announced an early end to the so-called quantitative tightening program that's seen it drain Dollars from the financial system as it stops reinvesting the proceeds of maturing bonds acquired during the quantitative easing years, which should also have been a negative for the greenback.

But Wednesday's comment about contemplating the future path of rates was seen by investors and analysts as a suggestion the Fed has not made up its mind on whether it will need to be cut further in the months ahead.

"The Fed cut its policy rate by 25bp and left the door open for more, but described this as an insurance cut rather than the beginning of an easing cycle. Markets were positioned for a more dovish outcome, so US interest rates and USD bounced while equities tumbled," says Richard Franulovich, head of FX strategy at Westpac.

The comment was a new addition to the Fed's regular statement, which normally only changes modestly and at the margins as the outlook evolves, that's problematic for currency traders because the market was looking for Wednesday's move to be followed by two further cuts by year-end.

Bond and derivatives markets were pricing-in a total of 75 basis points of interest rate cuts in 2019 and another 25 basis points of cuts in 2020 before the Fed decision on Wednesday, but by Thursday morning the overnight-index-swap (OIS) market was beginning to lean toward only one more cut for this year. Investors are also now looking again at the outlook for 2020, with the OIS market suggesting it could be the end of next year before a third cut comes rather than end of the first quarter in 2021.

"There was no explicit reference to providing further accommodation, though the Fed repeated that they “will act as appropriate to sustain the expansion”. That certainly keeps the door wide open to further cuts without explicitly pre-committing to it," Franulovich writes, in a morning briefing to clients. "The US dollar rose against all G10 currencies on the Fed headlines."

Expectations for rate cuts began to mount in May when an escalation of the trade war with China threatened to exacerbate a slowdown in growth elsewhere in the world, which could eventually clip the wings of the U.S. economy. These concerns saw the financial community rapidly coalesce around the idea that the Fed, under fire from President Donald Trump for raising rates last year, would cut rates in a steep and rapid manner.

However, the so-called 'dot-plot' of policymaker forecasts of interest rates released back in June already showed the Federal Open Market Committee was a long way off from radical action, with only eight of the 17 voters on the committee looking for a rate cut before year-end and another eight of them looking for steady rates. One rate setter was still looking for a 2019 hike at that time and two FOMC voters were against Wednesday's cut.

As a result, signs of a hesitant Fed were there even before U.S. economic data began to improve. U.S. GDP growth for the second-quarter beat expectations last week after consumer and government spending compensated for weakness elsewhere. And after the U.S. economy managed to create only a paltry number of new jobs in May, nonfarm payrolls growth also rebounded strongly in June. The Fed acknowledged these developments Wednesday.

"Expectations for narrowing US interest rate differentials to the rest of the world have been wound back, further supporting USD.  The likelihood of continued firm US GDP growth is also continuing to underpin USD," says Kim Mundy at Commonwealth Bank of Australia. "Today’s Bank of England (BoE) rate announcement could push GBP towards the 16 January 2017 low of 1.1986, which is only some 1.1% away...there is a risk that the BoE removes its “gradual” and “limited” tightening bias." 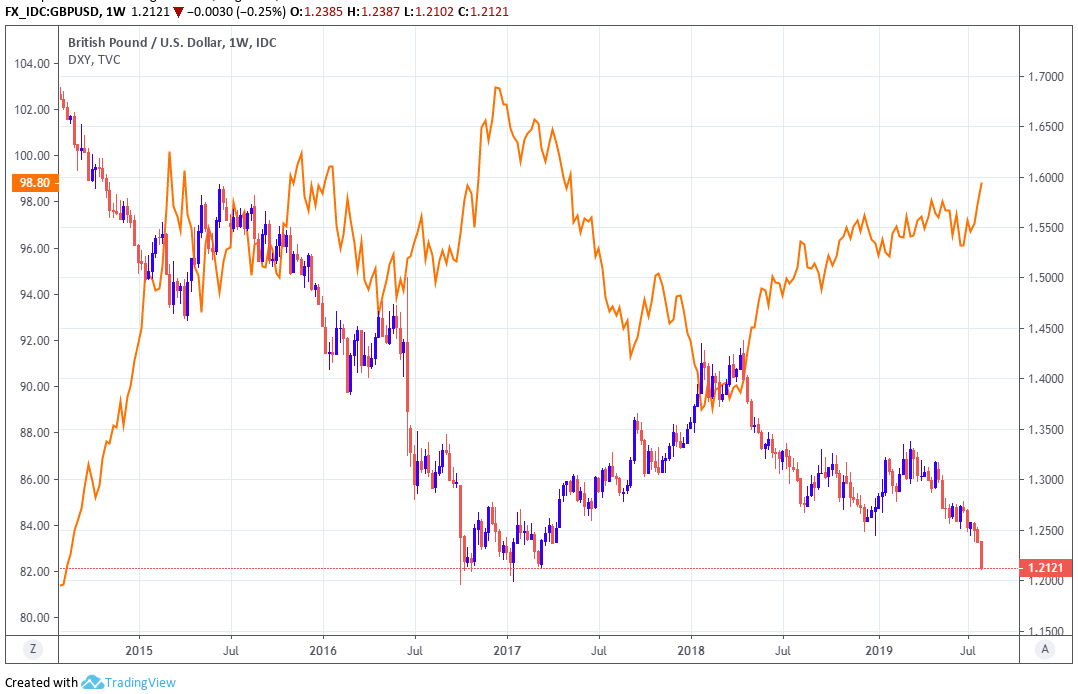