The Dollar rose Tuesday and could remain on its front foot for a while to come, according to analysts at CIBC Capital Markets, who say the U.S. currency is unlikely to depreciate until the Euro rises from the depths of its latest trough.

Bank of International Settlements (BIS) data shows 23.1% of daily turnover in the global foreign exchange market is concentrated in the Euro-to-Dollar rate, which is by far and away the largest volume for any one currency pair.

The dominance of the U.S. Dollar and the Euro-to-Dollar rate in the global market is what tells CIBC that without a stronger Euro, the U.S. greenback is unlikely to depreciate.

"These are tough times to be optimistic on the EUR. The amount of event and data risk ahead make for a very difficult environment for fertile investing. By extension, this matters if you entered this year with a strategically bearish USD view as well," says Bipan Rai, a macro strategist at CIBC. "Put simply, you can’t easily get a weaker USD without a stronger EUR over the longer-term." 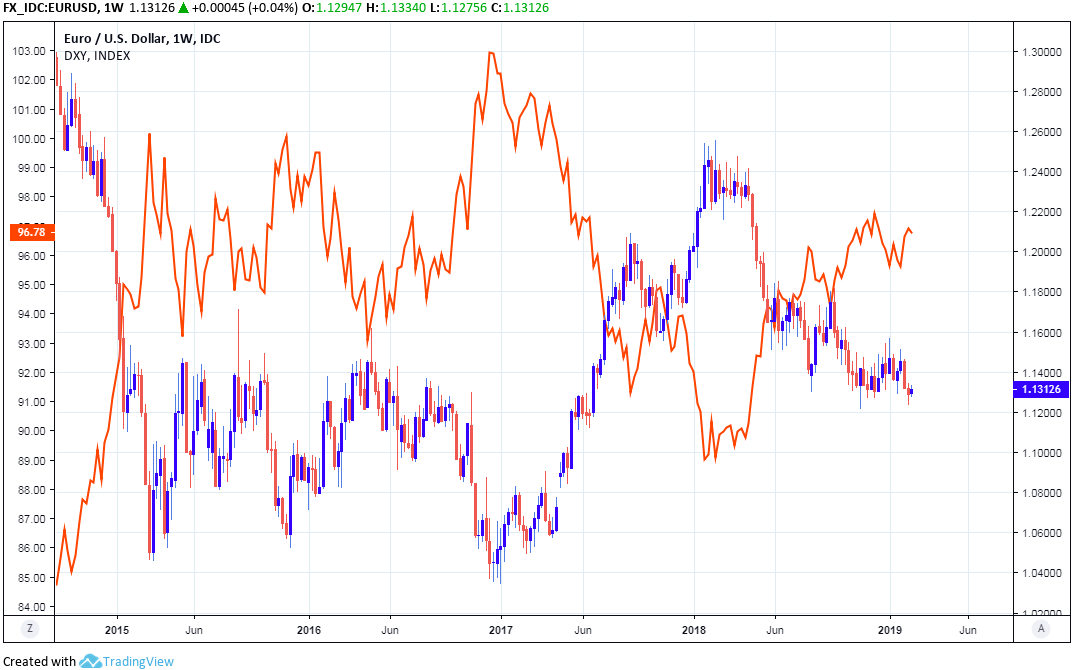 The New Year began with a strong consensus among investors and analysts that the Dollar would depreciate in 2019 and that the Euro-to-Dollar rate would enjoy another vintage year like that experienced back in 2017 when the currency pair rose by close to 15%.

However, that's not quite how the 2019 story has unfolded so far and all of the available economic data suggests it might have been a pie-in-the-sky kind of idea from the very beginning. The Dollar index is up by 0.76% this year and EUR/USD is down -1.2%.

"The moribund EUR is really the key reason why the USD hasn’t begun its descent yet. It’s moribund for several reasons and unsurprisingly – most of the reasons revolve around the German economy," Rai says, in a note to clients. 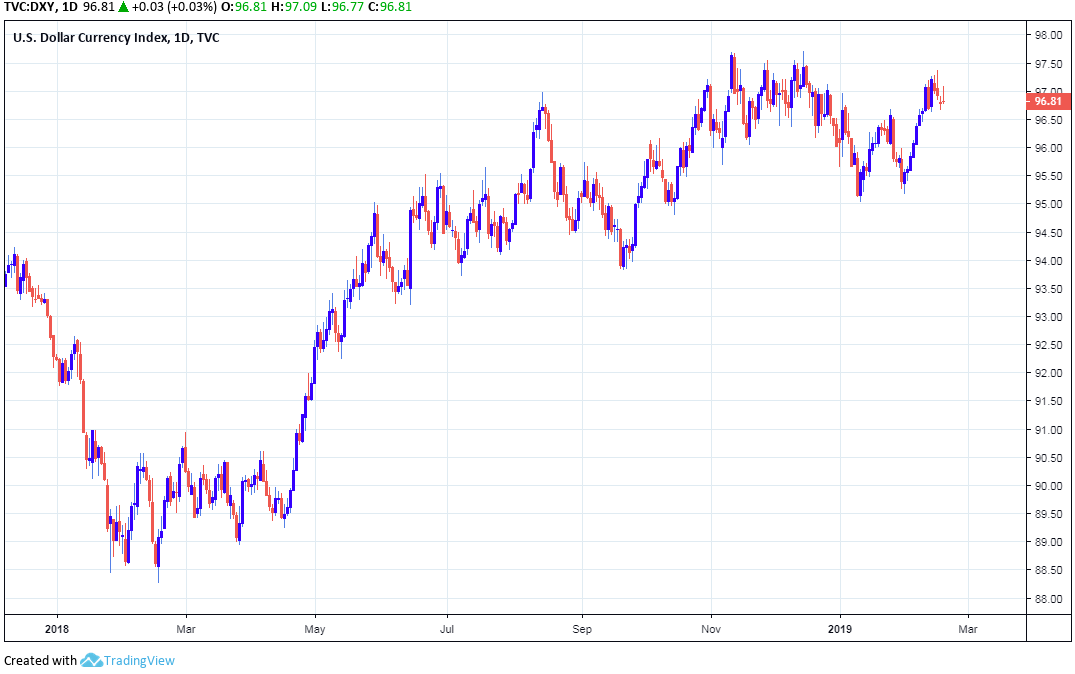 Germany's economy has been at the heart of the slowdown, although not the only cause, because GDP contracted in the third quarter and appeared to stall during the final three months of the year.

Destatis will have the last word on whether the German economy entered recession, which is defined as two consecutive quarters of negative growth, in the final half of 2018 on Friday with the publication of its final GDP estimate.

However, the ZEW sentiment index pointed on Tuesday to a further deterioration of the German economic situation at the beginning of the New Year. The official word on what happened to Germany's economy in the first quarter of 2019 will not be out until April, which means markets could remain uninspired by the Euro for a while yet.

"The performance of the German economy remains integral to the performance of the EUR. Consider that for non-core EMU economies, the combination of QE and rate cuts over the past decade have worked out reasonably well from a growth perspective. But despite those gains, the productivity differential between Germany and the rest of the EU hasn’t budged. This is part of the reason we’ve revised our view of the EUR/USD long-term fair value range from 1.25-1.27 to 1.18-1.19," says Rai. 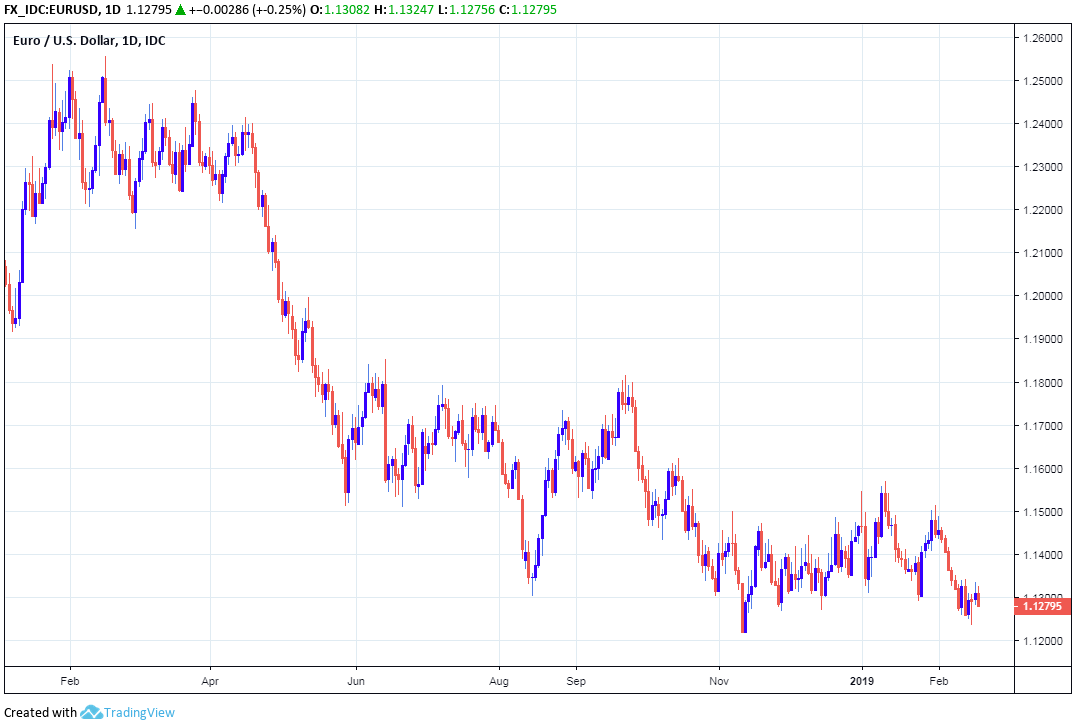 Rai says a "lackadaisical" Germany will keep the Euro on its back foot and the Dollar supported until activity picks up and growth begins to recover, ensuring the recent 1.12 to 1.16 trading range remains in place for a while yet.

CIBC says a recovery could happen sometime in the second half of the year, although there's significant uncertainty about this projection given a series of domestic and international headwinds facing the single currency.

"There’s the issue of auto tariffs," Rai says. "That matters for Germany. Automobiles and auto parts make up around 15% of German exports, and outside of the EU - the US represents Germany’s largest export market."

Markets are increasingly fearful that President Donald Trump could choose to impose tariffs of up to 25% on Eurozone exports of cars to the U.S., in order to achieve leverage over the European Commission in current and future trade negotiations.

This could come at a time when the German economy is already weak and the Brexit process is threatening Germany's largest export market inside the EU. Fears are also rising at a time when the rest-of-world economy has softened due to the U.S. trade war with China.

There is also a general election due in Spain during April, which could have consequences for growth in one of the bloc's largest economies as well as the supranational politics of the Eurozone, and that will come just month before an even bigger vote.

Elections for the European parliament are also due to be held in May and could result in a potentially paralysing contingent of anti-establishment, anti-austerity and anti-Euro representatives being despatched to Brussels from across the continent.

"For now, the broad 1.1200-1.1600 range is holding for EUR/USD," says Rai. "But we’ll need to wait until issues like the trade tariffs, and the upcoming Spanish election are resolved and a cyclical rebound in the German economy is confirmed before launching into EUR bullish strategic trades."