Analysts at the bank say the key driver for the New Zealand currency will likely remain global investor confidence, which leaves it at risks to further declines, particularly against the Dollar.

However, against the likes of the Pound and other currencies the near-term outlook is more nuanced.

"A wobbly start to the week for the Kiwi and risk appetite in general as we head into this holiday-shortened week. Oil prices and RBNZ policy rate expectations have faded, but that all pales in comparison to the massive swings seen in US rates, and NZD price action this week is likely to also be mainly driven by the offshore vibe, which is anything but robust," says analyst Brian Martin at ANZ.

Global markets continue to struggle amidst an environment of elevated energy prices and rising central bank interest rates, particularly at the world's most systemically important central bank, the Federal Reserve.

The Fed is engaged in a series of rapid and outsized hikes - the most recent coming last week - which is raising the cost of borrowing in the U.S. and globally, while also draining liquidity from the global financial system.

This leaves the pro-growth New Zealand Dollar at risk of underperformance. 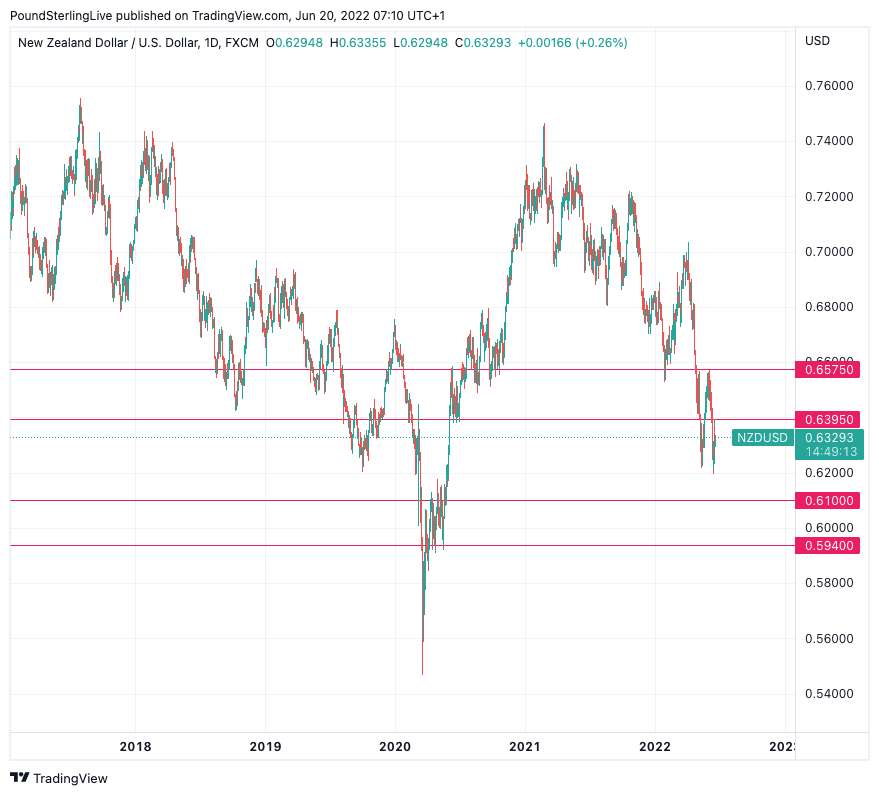 Against the British Pound the New Zealand Dollar is meanwhile forecast to maintain a tight range, which if correct, minimises any risk in either direction for those watching this exchange rate over coming days.

This is largely because both sides of the Pound to New Zealand Dollar exchange rate are deemed by ANZ to be susceptible to the U.S. Dollar to the same degree, meaning GBP/USD and NZD/USD would likely see similar moves as the Dollar dominates global FX.

This effectively cancels out any significant moves on the cross rate that is GBP/NZD.

"USD impact on both legs cancelled out on this cross. No obvious catalyst in sight for a significant break-out," says Martin. 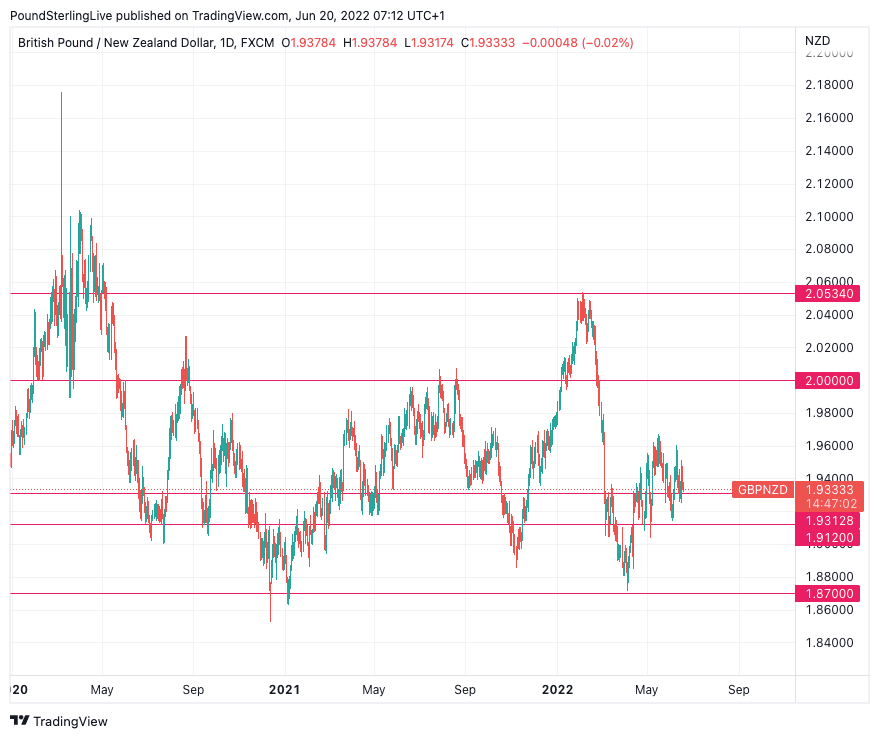 The New Zealand Dollar's prospects against the Australian Dollar however look more interesting, as Martin explains:

"NZD/AUD Has rallied towards 0.91, the key level it broke below on the way down. Australia’s economy looks in better shape than NZ’s, and that speaks to weakness, but markets aren’t trading that and it could be short-covering of a consensus trade behind the recent rally. Let’s see." 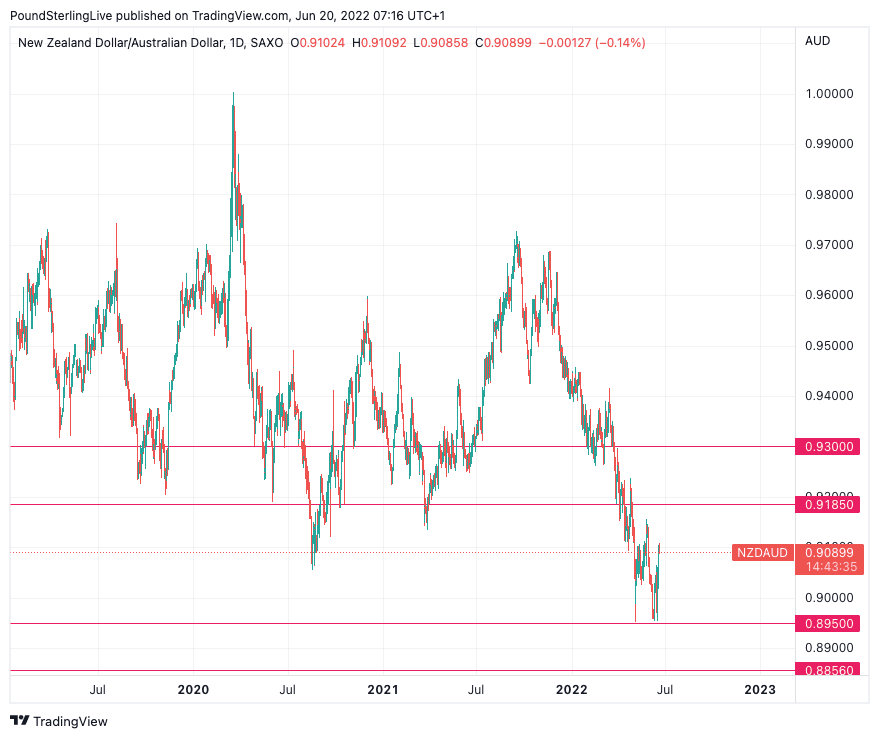 Above: NZD/AUD daily with key levels from ANZ Research

Against the Euro, the New Zealand Dollar is expected by ANZ to be "stable around 0.60".

"ECB’s new anti-fragmentation tool will allow it to hike without restraint; that could be very EUR positive," says Martin. 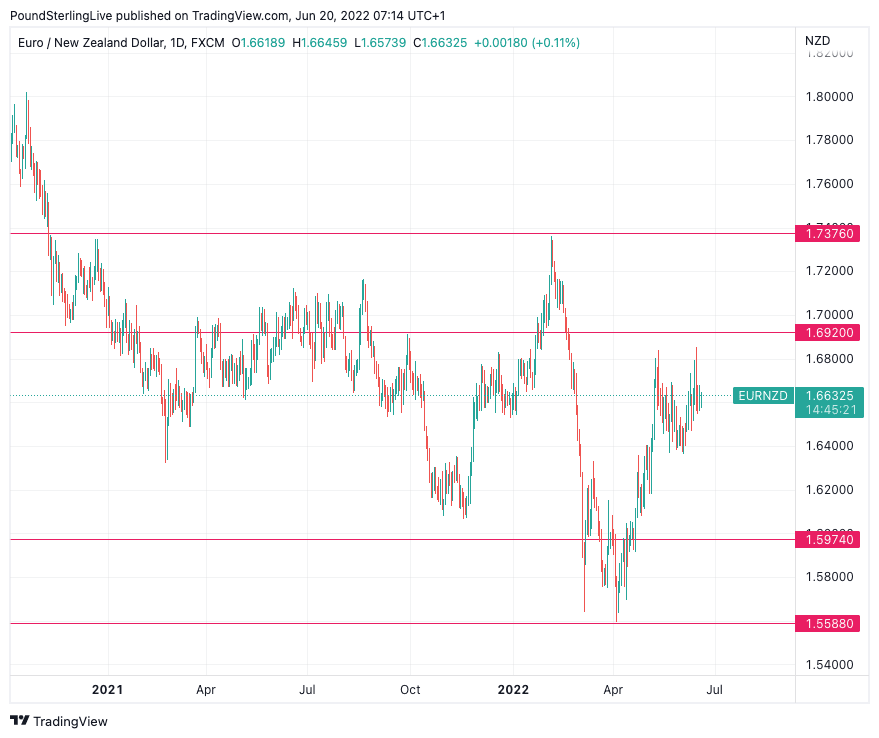 Above: EUR/NZD daily chart with key levels from ANZ Research. The EUR/NZD is approximated by Pound Sterling Live from the stated NZD/EUR values provided.