The Pound to New Zealand Dollar exchange rate opened the new week on its front foot but the nascent rebound may be likely to lose steam ahead of the 1.94 handle in the days ahead while Friday’s U.S. inflation data could yet see GBP/NZD probing below the nearby level of 1.90.

New Zealand’s Dollar ceded ground to Pound Sterling on Monday but remained one of the better performing major currencies for the recent week following an extended recovery by the Chinese Renminbi from its mid-May lows and a further softening of U.S. Dollar exchange rates.

“USD is starting the week on the defensive against all major currencies, stock markets are up and the bond market is calm. China’s economic slowdown is stabilising as the Caixin composite PMI rose,” says Elias Haddad, a senior currency strategist at Commonwealth Bank of Australia.

“GBP is up against most major currencies today and UK yields are higher across the curve. Still, UK stagflation risk will complicate the BoE’s tightening task, keep UK real yields deeply negative and undermine GBP. UK political uncertainty is a sideshow,” Haddad and colleagues said with emphasis on Monday.

U.S. Dollar exchange rates ebbed further to open the new week and some analysts including the team at Commonwealth Bank of Australia expect them to remain under pressures, which would imply limited - if any - further upside for GBP/NZD in the days ahead. 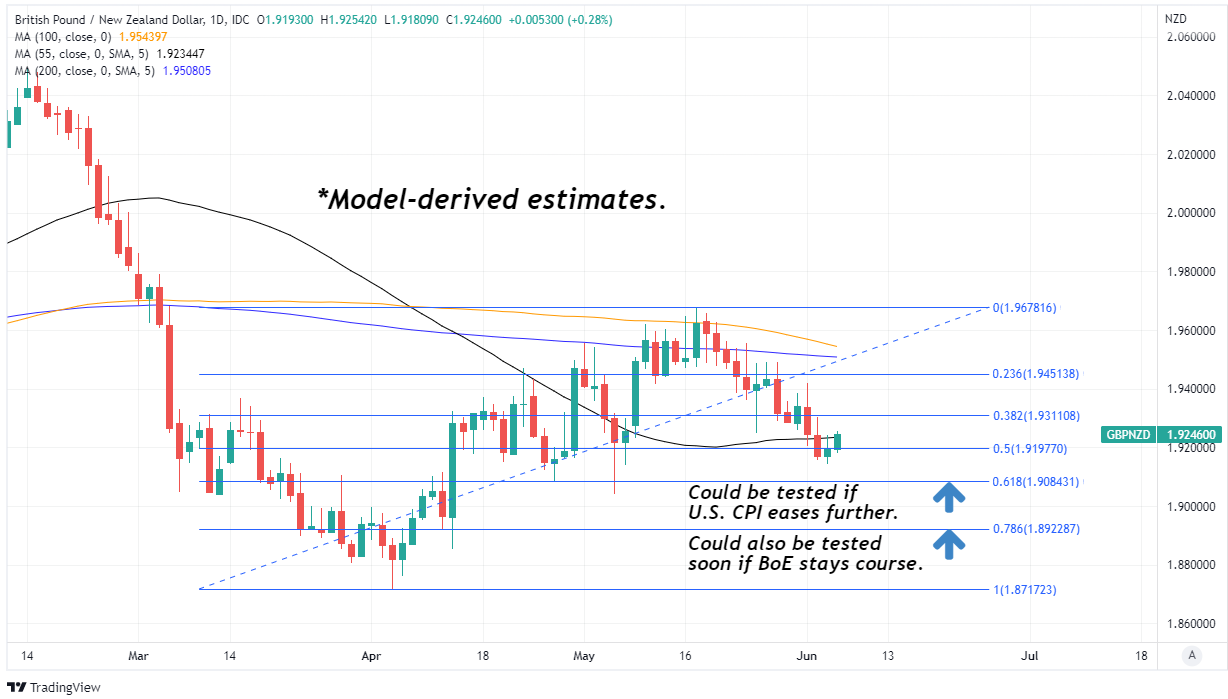 While the rally in the Renminbi and softer U.S. Dollar have been key drivers on NZD/USD, and in turn burdens upon GBP/NZD, Kiwi government bond yields have also recently been more supportive of the currency too.

Kiwi yields have risen due in part to the Reserve Bank of New Zealand (RBNZ), which lifted its interest rate from 1.5% to 2% last month before signalling using its updated forecasts that the benchmark cash rate could yet rise to 4% or more by the early months of 2023.

“NZD/USD can break above its near-term resistance near 0.6550 if the USD eases as we expect. Similar to AUD/USD, NZD/USD is significantly undervalued compared to NZ’s key commodity prices and the NZ-US interest rate differential (chart below),” says Joseph Capurso, head of international economics at Commonwealth Bank of Australia and colleague of Haddad.

All of this matters for Sterling because GBP/NZD always tends to closely reflect the relative performance of the Pound and the New Zealand Dollar when each is measured against the U.S. Dollar but in a manner that often leads it to trade with a negative correlation to NZD/USD. 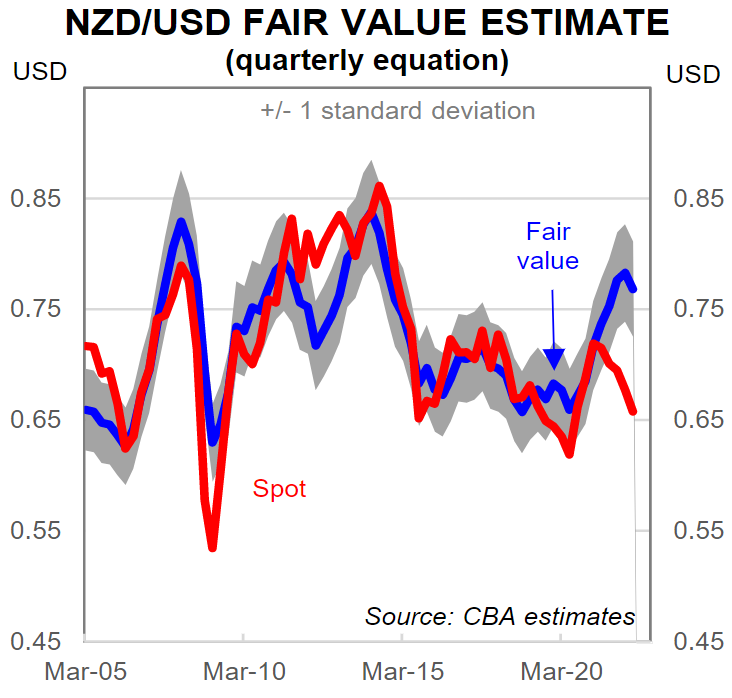 The implication is that if the multi-week recovery in NZD/USD extends through the days ahead, then the Monday rebound in GBP/NZD could be likely to give way to renewed losses as the week goes on.

This would be even more likely if Friday’s inflation figures from the U.S. provide further support for the idea that the peak in U.S. inflation has already been and gone, although it’s the month-on-month pace of core inflation that will be most influential among Federal Reserve (Fed) policymakers.

U.S. inflation figures and other international factors are likely to be dominant for both the Kiwi and Sterling this week given that both UK and New Zealand economic calendars are devoid of major appointments for either currency.

“The Kiwi is back above 0.65 after a volatile week. We have downgraded our year-end forecast from 0.69 to 0.67,” says David Croy, a strategist at ANZ.

"That reflects our ongoing expectation that the USD will continue to moderate, but also that markets have shifted their focus away from carry and the erstwhile strong economy and are instead now more focussed on hard landing risks and high energy prices," Croy and colleagues wrote in a Friday note. 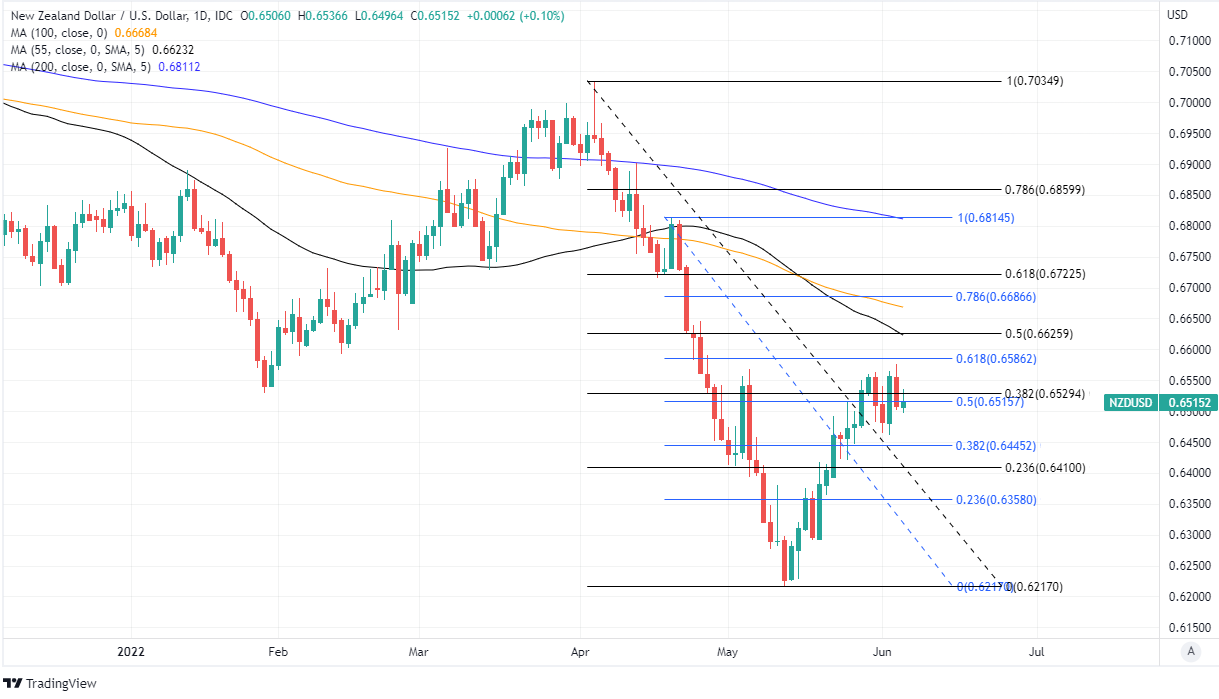 Above: NZD/USD shown at daily intervals with selected moving-averages and Fibonacci retracements of early and mid-May declines indicating possible areas of technical resistance for the Kiwi. Click image for closer inspection.