The Pound to New Zealand Dollar exchange rate (GBP/NZD) starts the new week on the offensive and a short-term trend of appreciation looks set to extend amidst little support for the Kiwi owing to volatile global markets and fading interest rate support.

The New Zealand Dollar has lost value to all its G10 peers over the course of the past month and this trend of weakness is evident again on Monday May 16 with losses coming against all the major currencies.

GBP/NZD is seen three-quarters of a percent higher at 1.9617 as it climbs in a short-term channel higher: 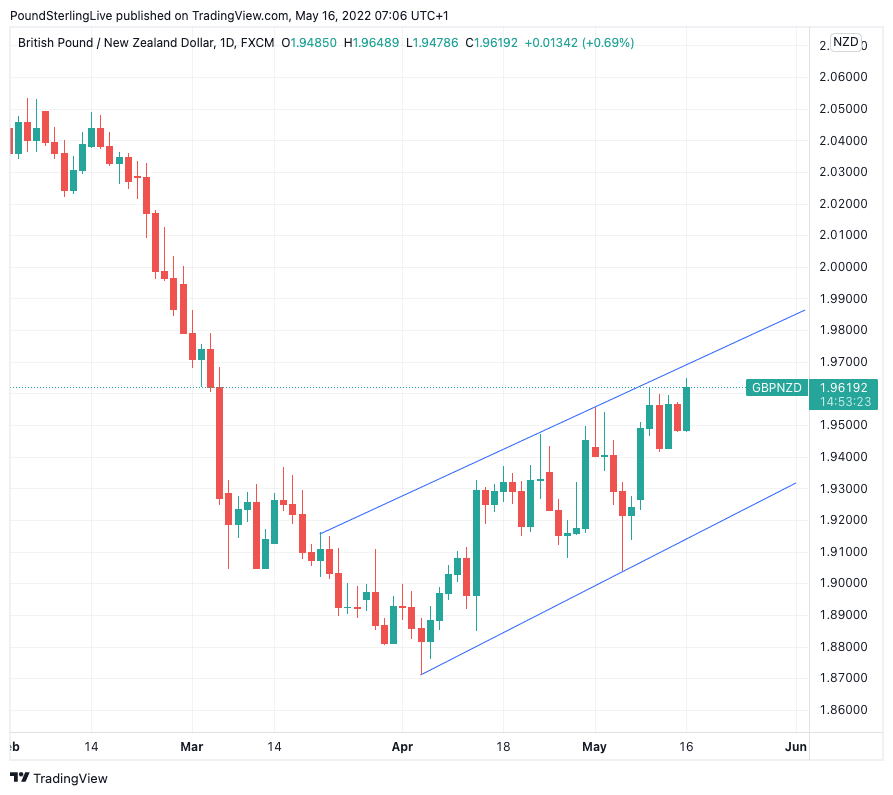 The above GBP/NZD daily chart suggests the near-term trend is higher as Sterling recovers from the sharp falls of the February-March period which were driven by the market's reaction to the war in Ukraine, which initially benefited the commodity-exposed New Zealand Dollar.

However the conflict in Ukraine has now largely been 'priced in' to markets and is therefore a diminishing source of support to the New Zealand currency.

Although GBP/NZD is trending higher, analysts at ANZ Bank say in a regular weekly update on the New Zealand Dollar that they predict the GBP/NZD exchange rate to be "very stable" in the near-term. (Set your FX rate alert here).

"Risks in both directions; both countries face recession risks, both currencies sensitive to energy prices/risk appetite," says Brian Martin, an analyst at ANZ.

The New Zealand Dollar's soft start to the week means it is a further three-quarters of a percent lower against the U.S. Dollar and Martin says direction here in coming days will remain impacted by broader global market sentiment where volatility will remain elevated.

"It was a torrid and volatile week in markets, and the sixth straight week where the Kiwi declined. Domestic factors do matter for the NZD, but this week is a fairly quiet one locally until Thursday, when we get the Budget, and these haven’t typically been big days for FX," says Martin.

"We are left watching global events, at least until next week’s MPS," he adds.

Two major themes are impacting on global investor sentiment, and therefore the New Zealand Dollar: 1) the slowdown in China's economy amidst an ongoing battle against Coronavirus and 2) the Federal Reserve's intention to rapidly raise interest rates.

China is offering mixed signals to sentiment: on one hand Shanghai looks to be easing lockdown conditions, offering hope that the worst of the Covid lockdowns might have passed. On the other hand data out of China on Monday was worse than expected.

China reported industrial production was down 2.9% year-on-year in April, a far worse outcome than the 0.4% growth the market was anticipating.

China's jobless rate rose to 6.1% in April, the highest level since the 6.2% peak seen in the early part of the Covid-19 pandemic in February 2020.

Retail sales plunged 11.1% year-on-year in April, nearly doubling the -6.1% figure the market was looking for.

The decline confirms a significant loss in demand in the world's second largest economy as major population centres are shut down to prevent the spread of Covid.

It is however reported Shanghai is to end its Covid lockdowns and return to normal life in June, amid the economic slowdown.

Authorities said Monday restrictions are to ease in stages; "from June 1 to mid- and late June, as long as risks of a rebound in infections are controlled, we will fully implement epidemic prevention and control, normalise management and fully restore normal production and life in the city," said Shanghai's Deputy Mayor Zong Ming.

A significant upside pulse for the New Zealand Dollar could follow a major post-Covid rebound in Chinese economic activity, but investors might have to wait well into the second half of the year before a recovery begins in earnest. 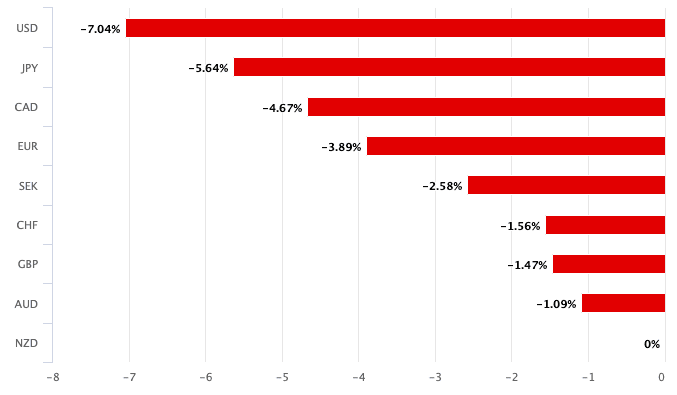 Above: NZD performance over the course of the past month.

Traders are meanwhile contending with a Federal Reserve that is set to continue raising interest rates in order to fight inflation, in doing so they raise the cost of borrowing and drain liquidity from the global financial system.

This is typically unsupportive of pro-cyclical and pro-growth currencies such as the New Zealand Dollar.

"Woeful risk sentiment is the culprit," says Nat Keall, Economist at ASB, explaining the New Zealand Dollar's recent underperformance. "NZD is a ‘procyclical’ currency which means it tends to rise when there is optimism about the global outlook and fall when moods are more pessimistic."

Markets currently anticipate a further 190 basis points of hikes to come out of the Fed over the remainder of 2022.

"What happens next depends on how risk assets fare as bond yields likely edge higher, having corrected sharply lower last week. Risk assets are in essence playing chicken with the Fed – but the Fed is (publicly at least) showing no signs of flinching. And they’re not in a position to back down either, so brace for volatility," says Martin.

In fact, RBNZ rate hike expectations are actually coming down with markets now seeing a 'terminal' RBNZ rate of 3.69% by July 2023, down from the 4.0% priced on May 13.

This typically suggests investors are anticipating slower economic growth ahead. It also suggests the NZ Dollar's advantage from rising rate expectations might have reversed and goes some way in explaining the underperformance of the past month.

This, combined with a slowing global economy, are unhelpful to the New Zealand Dollar and this sentiment can extend into the RBNZ's quarterly Monetary Policy Statement, due May 25.

"Recent weeks have seen a major underperformance of the NZD," says ASB's Keall. "We suspect this story has a bit longer to run."

In a weekly currency briefing to clients ANZ lay out the following themes and technical levels to consider when aprroaching the NZD:

NZD/AUD: Continues to range trade. While 0.91 is now being seen as an average, rather than a barrier, no imminent reason to expect a breakout.

NZD/EUR: Higher but still within ranges. Reduced gas supply to Europe raises recession risks there, but NZ hardly in the clear and ECB hawkish.

NZD/JPY: Has bounced to just below 81.2 resistance, but remains in its established downtrend channel. JPY no longer devaluing, has stabilised.