The Reserve Bank of New Zealand (RBNZ) is all but assured to raise interest rates midweek, but only an aggressive hike will be enough to deliver gains in the New Zealand Dollar strategists say.

For the local currency the prospect of a rate hike is well anticipated by the market which is more interested in the size of the rate hike: does the RBNZ 'go big' with a 50 basis point rise, or stick to a more conservative 25 basis point hike?

The latter could be where the NZD would find support.

"The RBNZ will raise rates on Wednesday, it is just a question of by how much – 25bp or 50bp," says Valentin Marinov, Head of G10 FX Strategy at Crédit Agricole.

Market consensus is firmly in the 25 basis point camp, which if delivered could actually be seen as a conservative rate hike given a 50 basis hike is an alternative.

Marinov says the NZ Dollar could decline on a 25 basis point decision.

"Market pricing for a 50bp rate hike has declined from about 40% to 30%, but a 25bp rate hike would still likely see a dip in the NZD on the announcement," he says. 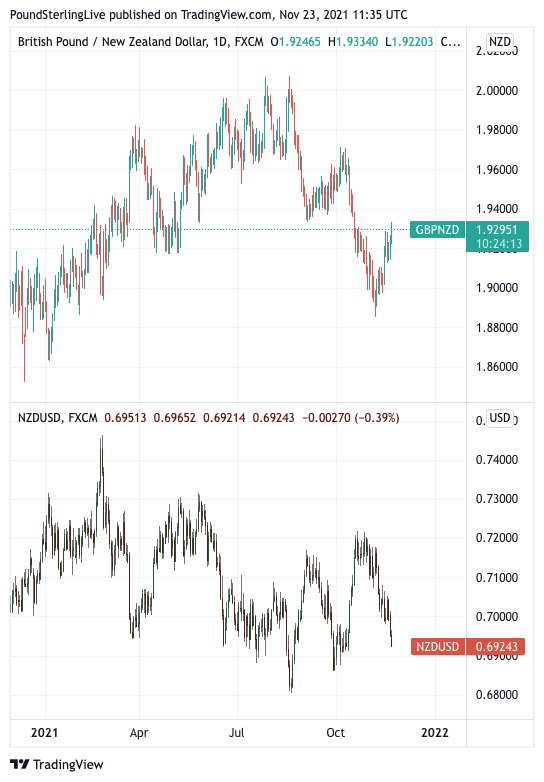 Ahead of the RBNZ decision the New Zealand Dollar was trading softer against most peers, partly as a result of pre-match positioning and a stronger U.S. Dollar across the board.

The Dollar was stronger and global markets were softer on November 23 amidst concerns over rising Covid cases in the EU which served a warning that a difficult winter for northern hemisphere economies awaits.

The New Zealand Dollar is sensitive to global risk and these developments are therefore proving an understandable headwind to near-term direction.

Geoff Yu, FX and Macro Strategist for EMEA at BNY Mellon, says the news out of Europe regarding the pandemic is another reminder that governments and monetary authorities such as the RBNZ "will have to contend with a structural demand drag throughout their forecast horizon".

This is why he expects the RBNZ to opt for a 25 point hike.

"Even if a particular economy is not directly affected, external headwinds from a significant trade partner such as the Eurozone will weigh on expectations," says Yu.

The Pound to New Zealand Dollar approaches the November RBNZ policy meeting with a renewed vigour, having lifted off an early November floor at 1.8854 to return to 1.9290.

The New Zealand to U.S. Dollar rate is meanwhile trending lower and is at 0.6980.

The RBNZ decision comes in an environment of near-term NZD weakness and by all accounts a consensus 25 basis point hike would not be enough to turn the situation around for the bulls.

"We think the well-telegraphed second hike of the cycle will be only of 25bp, bringing the policy rate (OCR) to 0.75%, the highest in G10," says Francesco Pesole, FX Strategist at ING Bank N.V.

ING says the RBNZ will want to see the full impact on growth caused by the Covid restrictions introduced in the third quarter.

The market will also focus on the content of the RBNZ's Monetary Policy Statement in search of clues as to how aggressive rate hikes in 2022 will be.

"The market is pricing in around 200bp of tightening in the next year, and while we think this is overly hawkish, we expect the OCR projections for end-2022 to be raised to 2.0% or more," says Pesole.

The analyst looks for a "generally hawkish tone" to the RBNZ statement, saying this would ultimately avert a dovish re-pricing of rate expectations in New Zealand.

But "we think the impact on NZD should be broadly neutral," says Pesole.

An outright bullish surprise from the RBNZ would be a 50 basis point hike which could at the very least put a floor under the currency near-term.

The case for rate rises rests on the impressive employment and wage growth dynamics currently experienced by New Zealand, courtesy of the country's zero-covid policy.

"The biggest upside risk to more persistent inflation will come from wages. Labour costs are expected to stay close to 3.0%y/y growth throughout the RBNZ’s forecast horizon, generating significant real income growth in 2023 and 2024. These pressures are already driving up the NZD’s real effective exchange rate," says Yu.

Unemployment has dipped to a near 15-year low and real GDP growth in the second quarter was four times the RBNZ’s forecasts.

"The economy has significantly less spare capacity than the RBNZ expected," says Marinov. "Businesses are having trouble finding workers and are having to increase pay to get them."

Marinov says current cash rate at 0.50% is 150bp below the RBNZ’s estimate of neutral and in its August MPS the central bank forecast the OCR to reach this neutral level by end-2023.

As long as the base rate is below neutral the settings at the RBNZ can be considered stimulatory, a situation potentially at odds with the country's robust economy.

"Policy settings remain very accommodative. This is the case even if central banks hike in line with current market pricing," says Yu.

"We think the RBNZ needs to accelerate this timetable, given that NZ’s international borders are not likely to open within the coming six months, to ease inflation pressures by allowing more immigration," says Marinov.