The Pound-to-New Zealand Dollar exchange rate has stabilised above last week’s lows around 1.93, although some forecasts suggests it is at risk of downside into year-end.

Sterling was one of the better performing major currencies early on Thursday after catching a bid late in the prior session when Bank of England (BoE) Governor Andrew Bailey and Monetary Policy Committee colleagues appeared before the Treasury Select Committee in parliament.

Governor Bailey gave members of the committee a number of reasons why the BoE is confident that UK inflation will ultimately return to the bank’s 2% target following an expected increase to around 4% later this year.

But he took care to note that this taming of price pressures is likely to require “some increase in interest rates” over the next two years, when participating in parliament’s quarterly Monetary Policy Report hearing.

“I should also say that we did say in the minutes of the last meeting that the projection that inflation will come back to target has within it broadly the view that there will be some increase in interest rates during that period," said Bailey.

"We don’t follow the market slavishly but the market curve does suggest that, and we think it’s reasonable broadly to think there will be some increase in interest rates,” he told the committee.

Governor Bailey also revealed that four of eight participating MPC members including himself were of the view in August’s meeting that the basic necessary conditions for an interest rate rise had already been met, but later judged that economic conditions hadn’t improved sufficiently to yet justify an increase in the 0.10% Bank Rate.

Above: GBP/USD at hourly intervals alongside NZD/USD, with Fibonacci retracements of August rallies indicating possible areas of technical support. Sterling outpaces the Kiwi in a late Wednesday rally against the U.S. Dollar, coinciding with parliamentary testimonies.

In what may have been a further comfort for Sterling, Deputy Governor for Monetary Policy Ben Broadbent told members of the parliamentary committee that this week’s newly announced increases in employment and employment earnings taxes could potentially be limited in their overall adverse impact on the economy because the levies have been preceded by increased government spending.

“If the economy continues to follow their forecasts, there is potential for rate hikes in 2022,” says Imre Speizer, head of NZ strategy at Westpac.

The Pound-to-New Zealand Dollar rate rose to test the 1.94 handle soon after the remarks were made, despite the Kiwi itself being in the midst of an attempt at climbing further against other currencies, while Sterling had edged above the level early in Europe’s Thursday session.

GBP/NZD continued this week’s tentative stabilisation on Thursday following 12 earlier unbroken declines, but the rub for Sterling is that the Reserve Bank of New Zealand (RBNZ) is widely expected to move sooner and faster than the BoE when it comes to lifting interest rates.

The outlook for RBNZ policy is a likely constraint on the extent to which the Pound-to-Kiwi rate may be able to recover in the coming days and weeks. 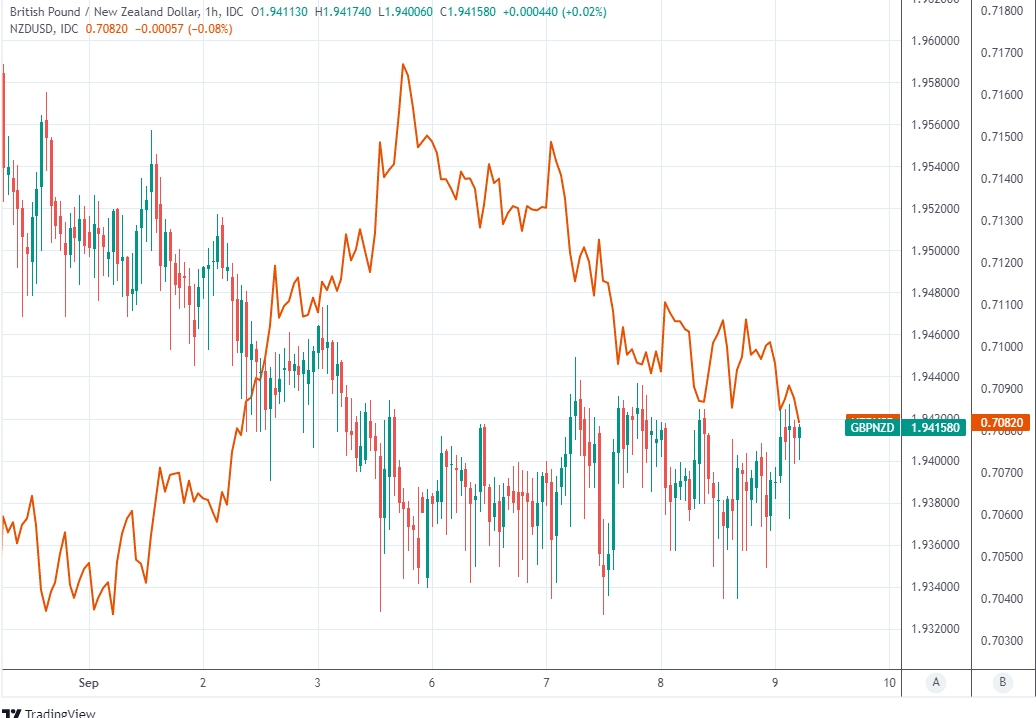 “New Zealand covid case numbers have been trending lower and helping to underpin expectations that the RBNZ will start tightening monetary policy from October. A 25bp rate hike is now fully priced by OIS markets,” says Kim Mundy, a strategist at Commonwealth Bank of Australia.

The RBNZ itself said in August that coronavirus-related disruptions to the economy are unlikely to deter it from raising New Zealand’s cash rate in the coming months due to the strength of the recovery from previous containment processes and rising inflation pressures in the economy.

This stance has seen investors and traders wagering with increased confidence that it will lift its cash rate from 0.25% to 0.5% next month, in what would be the first of an expected cycle of interest rate rises that could eventually see the benchmark for borrowing costs lifted to a little over 2%.

Market confidence has been bolstered however, by New Zealand’s progress in rolling back the latest wave of coronavirus infections, which has ebbed further this week while the country has quickly achieved one of the fastest rates of daily vaccinations seen in any country thus far in the pandemic. 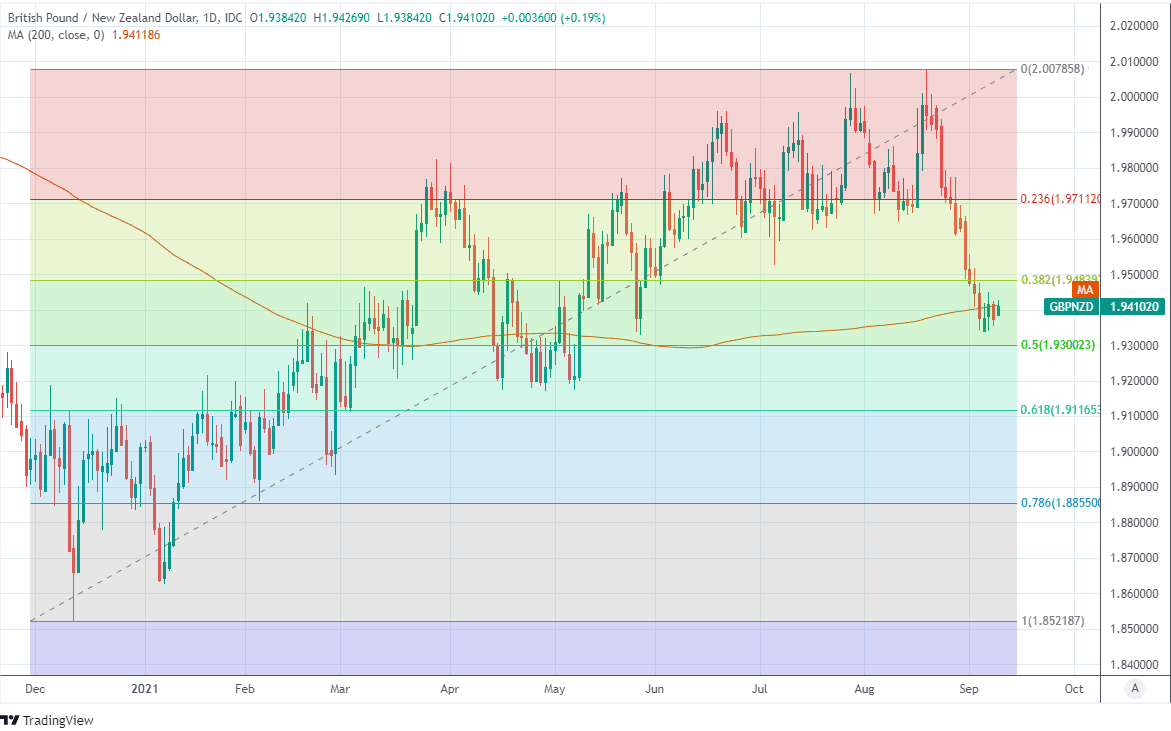 All of the above factors are helping to underpin the main Kiwi exchange rate NZD/USD and in turn are limiting the recovery potential of GBP/NZD, which always closely reflects the relative performance of GBP/USD and NZD/USD.

"While the next month is likely to be dominated by the local Covid outbreak, by year-end a more positive picture should re-emerge. The economy has been on a solid footing and activity should jump once Covid restrictions are relaxed, the RBNZ has signalled rate hikes, NZ-US yield spreads are rising, and commodity prices have a positive outlook."

Speizer and the Westpac team look for NZD/USD to consolidate its recent gains around 0.71 over the coming days before climbing steadily toward 0.74 in time for year-end, which implies downside risks for the Pound-to-New Zealand Dollar rate as year-end approaches.

Should NZD/USD succeed in advancing to 0.74 over the coming months, the main Sterling exchange rate GBP/USD would have to rise from 1.3750 to a new 2021 high some distance above the current one near 1.4250 simply in order to prevent GBP/NZD falling from Thursday’s level around 1.94 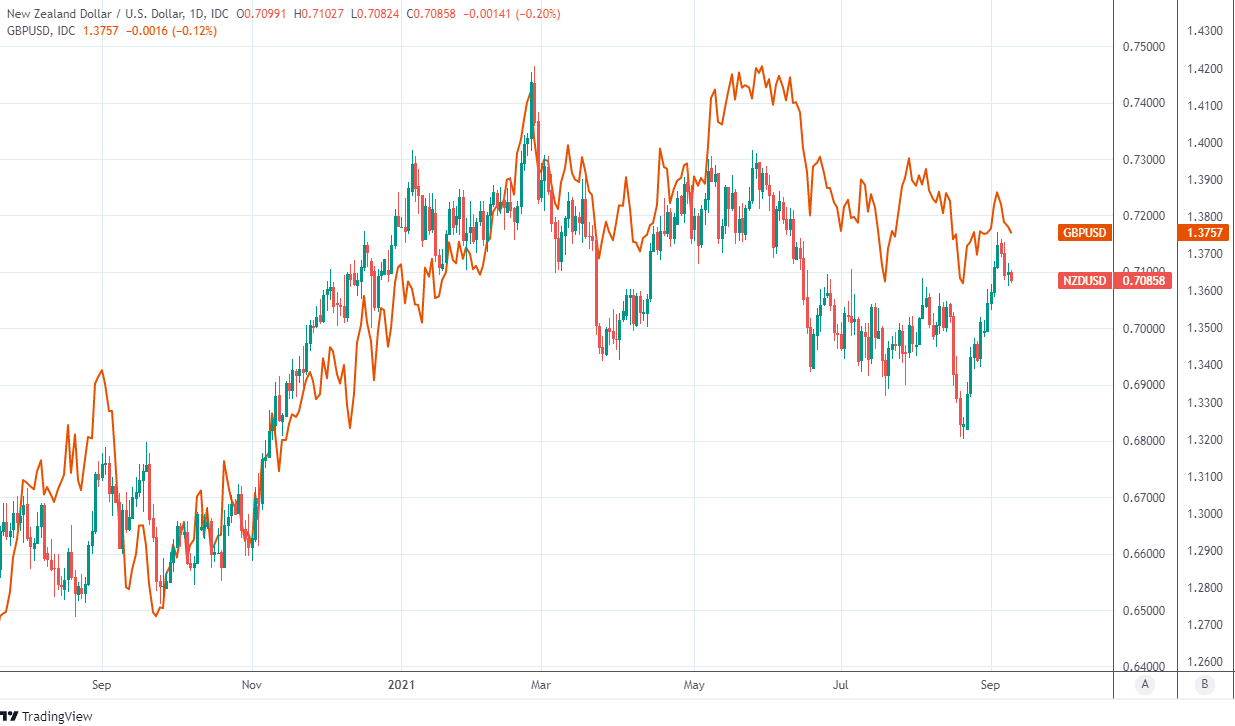 Above: NZD/USD shown at daily intervals alongside GBP/USD.