The New Zealand Dollar rose against the majority of global currencies and investors increased their bets for a Reserve Bank of New Zealand interest rate rise in the near future amidst further measures by authorities to constrain housing activity.

The RBNZ said in a statement that the central bank is planning to reduce the amount of low-deposit lending banks can make from Oct. 1, and will also consider introducing debt-to-income limits and/or interest-rate floors later this year.

"The probability of an August 18 RBNZ hike rose from 60% to 80% and we note that markets now see macro-prudential measures of this kind as compliments rather than substitutes for conventional policy," says Cole

The Pound-to-New Zealand Dollar exchange rate fell half a percent in response, with the spot market quoting at 1.9813. Banks are quoting payment rates in the 1.9120-1.9260 bracket while payment specialists are quoting in the 1.9630-1.9680 region.

The New Zealand Dollar-U.S. Dollar exchange rate is meanwhile quoted at 0.7011, having risen by a third of a percent.

"This is also leading to market participants pricing in an early hike from the RBNZ and as a result the NZ dollar is up," says strategist Jim Reid at Deutsche Bank. 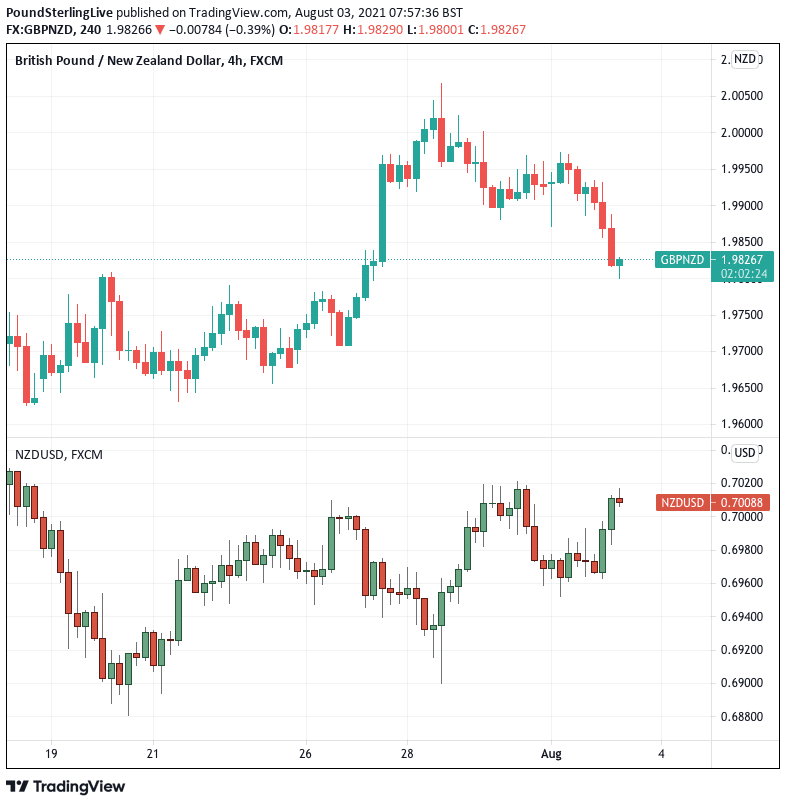 RBNZ Deputy Governor and General Manager for Financial Stability Geoff Bascand said the RBNZ is looking to ensure borrowers are resilient to a range of future economic and financial conditions.

"We are particularly concerned about those who have borrowed in the past 12 months at high LVRs and high DTIs," said Bascand.

“If house prices were to fall, some buyers could face the possibility of negative equity – which means the value of their property is below the outstanding balance on their mortgage," he says.

In order to prevent this problem from getting worse, Bascand says the RBNZ will be consulting on a proposal to further reduce the amount of high LVR lending to owner-occupiers.

They propose to restrict the amount of lending banks can do above an LVR of 80% to 10% of all new loans, down from 20% at present.

"Rate hike expectations have been encouraged overnight by the RBNZ’s announcement that it taken further steps to tighten macro-prudential policy in an attempt to dampen financial stability risks posed by the domestic housing market," says Lee Hardman, Currency Analyst at MUFG.

From a strategic perspective, MUFG reflect that the need for policy tightening is more imminent in New Zealand.

"We continue to favour the New Zealand dollar over the Australian dollar as the RBNZ is set to begin raising rates well ahead of the RBA," says Hardman.