The Pound-to-New Zealand Dollar rate was under pressure early in the new week as the Kiwi currency continued a run of outperformance that has recently seen it leaving all others in the dust, and which could yet see GBP/NZD testing the waters below 1.95 as it settles into a possible if-not likely 1.95-to-1.97 trading range for the short-term.

Sterling was itself a long way from being an underperformer on Tuesday but still fell by -0.35% against the New Zealand Dollar, taking GBP/NZD’s one-week loss to more than one percent while reducing the Pound’s 2021 gain over its Kiwi counterpart to 2.96%.

Pound-New Zealand Dollar rate declines were the result of outperformance by the Kiwi, which has recently drawn a bid from the market as it benefits from increasingly optimistic expectations and forecasts from analysts, investors and traders over the outlook for Reserve Bank of New Zealand (RBNZ) monetary policy.

International firms and speculators had been betting since May that the RBNZ could begin raising New Zealand’s main interest rate from its current historic low of 0.25% around the end of next year, with this coming after the bank presented to the market its own assumptions about future interest rates for the first time since the onset of the pandemic.

“Friday’s sharp reversal reduces the risk of a break below 0.6930, instead flipping near-term risks to the upside, with potential for 0.7100 to be tested during the next day or two,” says Imre Speizer, head of NZ strategy at Westpac, referring to the main Kiwi exchange rate NZD/USD. 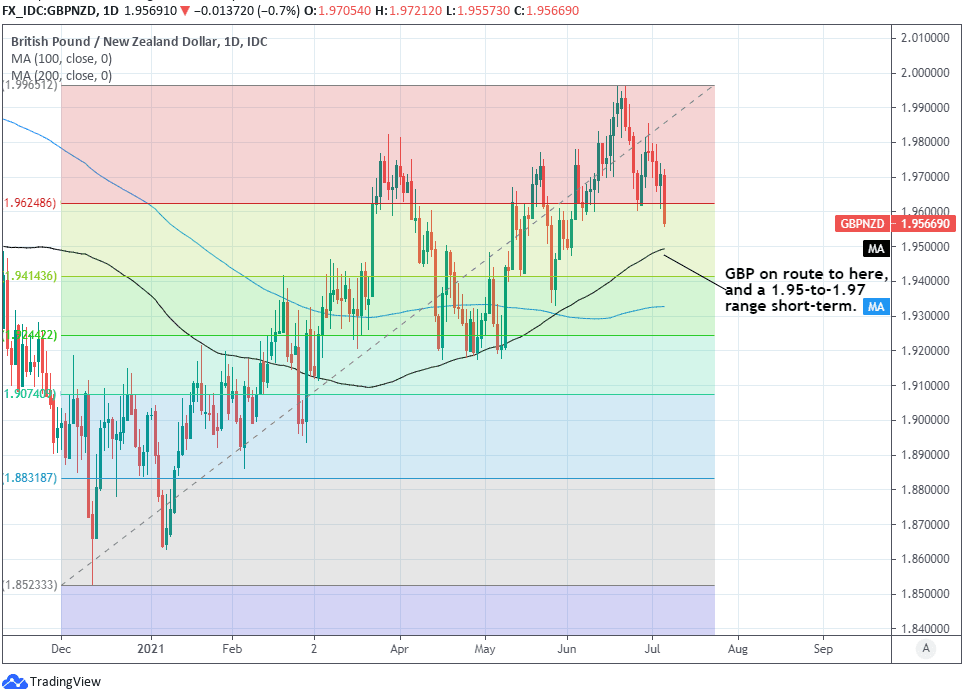 Since then financial market wagers on how soon and by how much the RBNZ could raise rates have increased, and overnight Tuesday saw more Kiwi lenders bringing forward their own forecasts into 2021, such that prices in certain derivative markets implied this week that there’s around a 54% probability the RBNZ will lift its interest rate by November 24 this year.

“The NZ economy is expected to remain buoyant over the remainder of this year, the RBNZ has signalled rate hikes, NZ-US yield spreads have resumed the trend rise, and commodity prices should rise further. These fundamentals should provide support for NZD/USD, our year-end forecast is 0.74,” says Westpac’s Speizer.

Local firms were initially sceptical of the RBNZ’s assumptions due to a range of factors including its cautious assessment of New Zealand’s economic prospects, the international coronavirus situation and the outlook for interest rates elsewhere in the world.

But in recent weeks economic data emerging from New Zealand has been stronger than many expected and some central banks elsewhere in the world including the U.S. Federal Reserve have signalled that they themselves may now be willing to raise rates sooner than was previously indicated as likely.

Increasingly ‘hawkish’ expectations of the RBNZ are supportive of the Kiwi Dollar, but a headache for Sterling and an outright headwind for the Pound-to-New Zealand Dollar rate, which may now be vulnerable to a short-term foray beneath the 1.95 handle which would equate to an NZD/GBP rate that may temporarily lift above 0.5128. 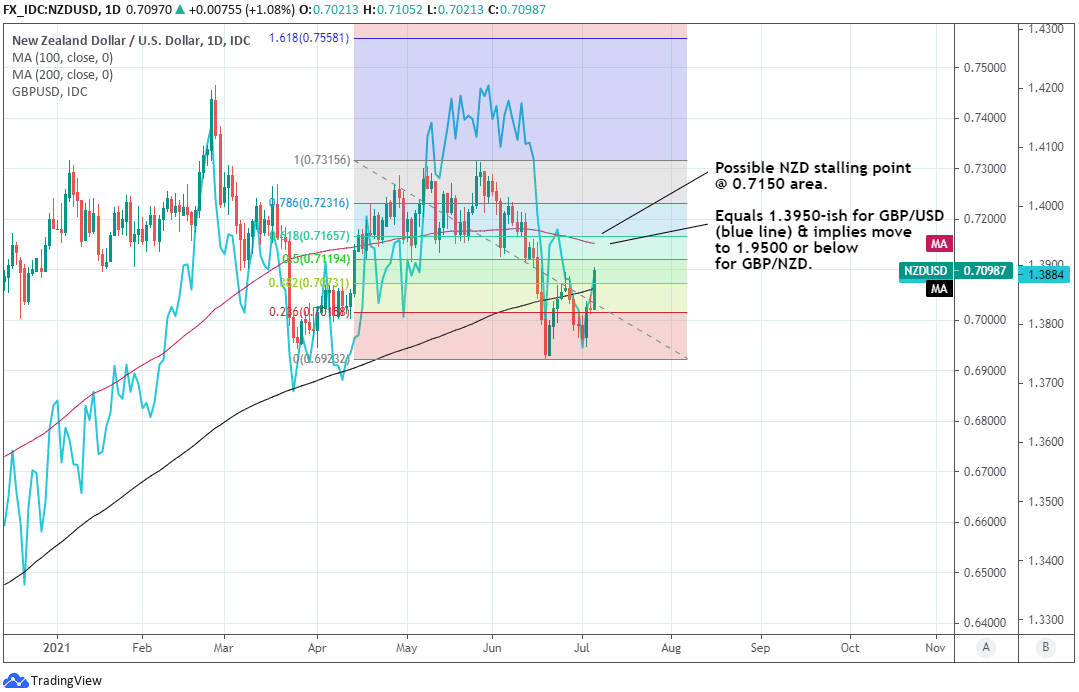 Above: NZD/USD shown at daily intervals with Fibonacci retracements of May correction lower, 100-day moving-average and GBP/USD (blue).

“We remain attuned to New Zealand’s decent macroeconomic backdrop, the risk of earlier hikes and record high commodity prices, all of which contrasts somewhat with the US, where data is strong-but-not-strong-enough, and could potentially delay Fed tapering and tightening,” says David Croy, a strategist at ANZ.

Still however, some analysts see the downside for the Pound-New Zealand Dollar rate and upside for NZD/GBP as limited, with the 2021 uptrend in GBP/NZD and this year’s downtrend in NZD/GBP both expected to remain in place at ANZ.

ANZ’s Croy wrote in a Monday evening (London time) note that “NZD/GBP lacks the upward momentum needed to break out of the well-formed 2021 downtrend channel,” the top of which coincides roughly with the 1.95 level of support for GBP/NZD.

GBP/NZD may have only limited downside beneath the 1.95 handle and would likely rise during bouts of strength in the U.S. Dollar, which tends to impact commodity currencies like the Kiwi more than the likes of Sterling.

The Pound-to-New Zealand Dollar rate would trade as high as 1.9714 if the main Sterling exchange rate GBP/USD fell to its nearest major support level around 1.38 during a bout of U.S. Dollar strength and, if at the same time, the main Kiwi exchange rate NZD/USD was pushed back to its equivalent around 0.70. 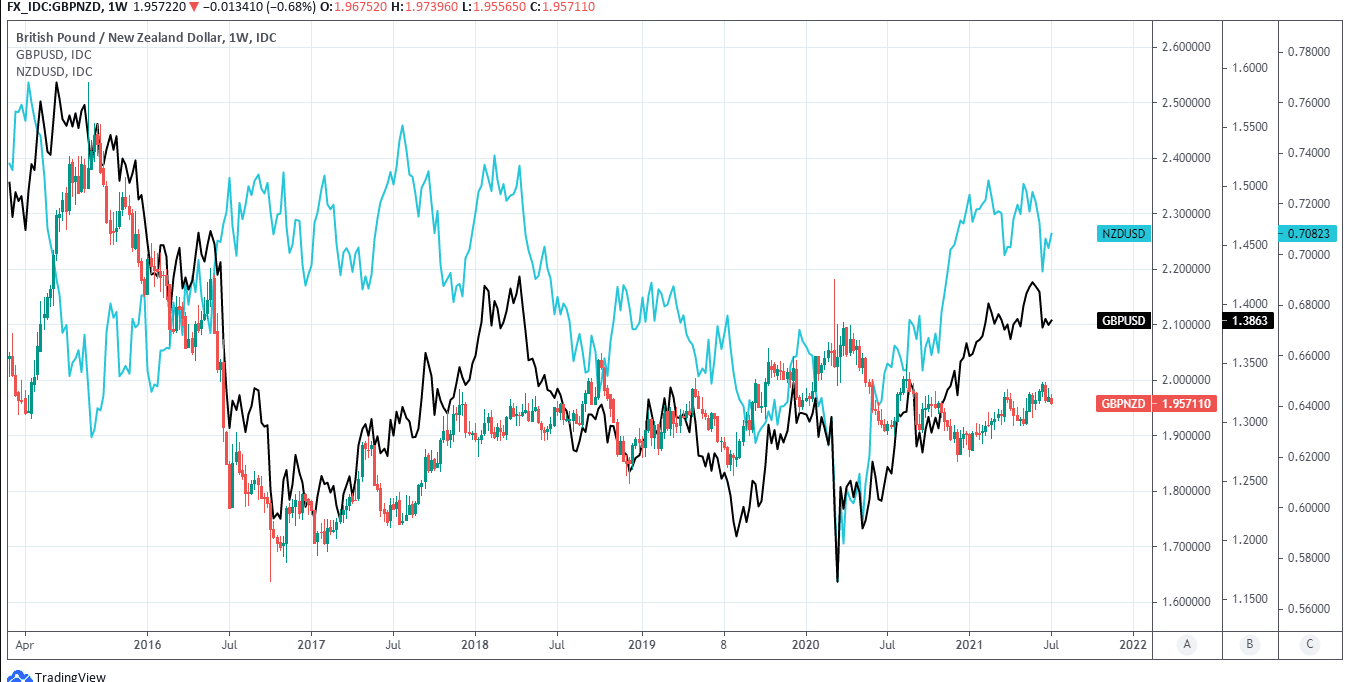 Above: GBP/NZD, GBP/USD and NZD/USD all shown at weekly intervals.