The New Zealand Dollar sold off heavily on news that the New Zealand government moved against the rise in housing prices with a raft of measures. John Hardy, Head of FX Strategy at Saxo Bank, says the move could risk denting New Zealand's attractiveness to foreign investors.

The New Zealand government moved aggressively against housing speculation with a raft of new measures overnight, a loud policy signal that the whole world should pay attention to, as policies aimed at inverting the K-shape are going to spread aggressively around the world.

It should have been clear, in perfect hindsight, that something was on the way, after all the leftist populist government was clearly appalled by the New Zealand’s housing prices rising rapidly and becoming the most expensive among all OECD countries last year after the RBNZ’s rate slashing in response to the Covid pandemic.

The first measure the government took was an update of the RBNZ’s mandate to consider housing prices in its policy mix, an idea that was floated in November of last year and made reality in late February – going into effect on March 1.

But overnight, we got a true hammer swinging against the rentier class, as the government will enact a number of measures to prevent the rise in housing prices by altering the tax code to make property investment and buy-to-let less profitable.

In addition, the government will open up land for new property development to expand the supply of housing.

Among the tax code changes: capital gains on investment properties will now be taxed for any property held less than 10 years (versus 5 years previously) and mortgage interest costs will now no longer be deductible versus rental income, a move against buy-to-let (or at least borrow to buy to let) investing.

A tremendous move in NZD/USD and other NZD-crosses after the NZ government’s move against housing speculation will slow growth at the margin and slow inbound investment (important to offset NZ perma-current account deficits). 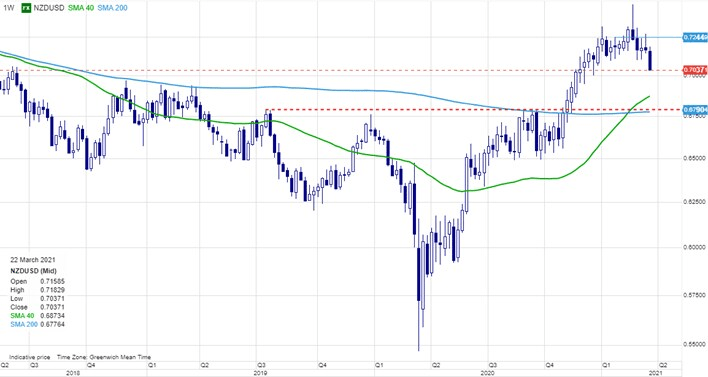 This could take NZD/USD well south of 0.7000 and possibly to at least the 0.6800 area that was an important resistance level on the way up.

But the bigger impact here is the signal value of a move like this – here is the first government that is taking a truly heads-on approach at pushing back against the unintended consequence of too easy monetary policy that supercharges the upside for incumbent wealth and the "rentier class" while leaving behind the lower income and especially the young who have no prospect of climbing on the wealth ladder when asset prices soar out of reach.

This is a real move to "invert the K" and it will spread to other countries quickly.

Perhaps New Zealand was one of the first movers with a policy like this because it was so quick to get ahead of the disease itself.