Global financial markets were indecisive on Tuesday alongside major exchange rates as investors alternated between the so-called reflation trade and expressions of concern about the near-term global economic outlook amid multiple setbacks in the rollout of coronavirus vaccines in developed markets.

"NZD/USD is trading near the middle of this year’s 0.7100‑0.7300 range. After eight years of negotiation, New Zealand signed an expanded free trade agreement with China. See here to view the key points of the deal. New Zealand Prime Minister Jacinda Ardern also warned the country’s borders may not open to the world this year (except with Australia and the Pacific)," says Elias Haddad, a senior FX strategist at Commonwealth Bank of Australia. 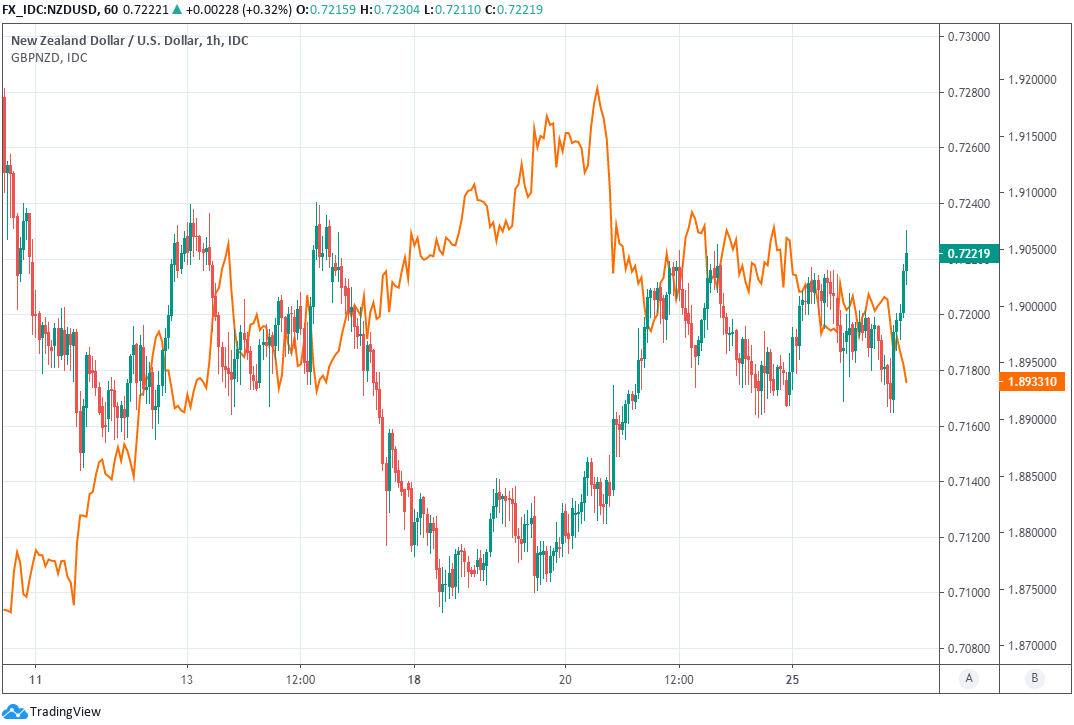 New Zealand's Dollar has been a consistent bastion of strength if-not outperformance as the Kiwi currency continues to benefit from its exposure to commodities and China's economy while reaping the rewards of a quicker and more effective domestic containment of the coronavirus.

Earlier containment has enabled the Kiwi economy to mostly reopen and operate largely unhindered even though international borders are still closed and were indicated by Prime Minister Jacinda Ardern on Tuesday to remain that way at least through the current year.

"Medicines regulator Medsafe will seek advice and recommendations from the Medicines Assessment Advisory Committee (MAAC) next Tuesday, about the Pfizer and BioNTech vaccine. The Ministerial expert advisory committee will review Medsafe’s benefit-risk assessment of the pharmaceutical company’s data and, depending on feedback, Medsafe may be able to grant provisional approval as soon as the following day," says Prime Minister Jacinda Ardern on Tuesday. 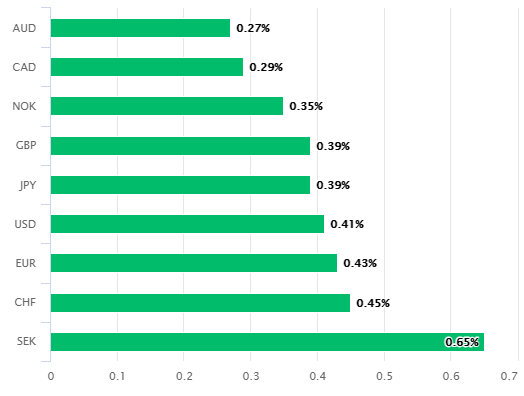 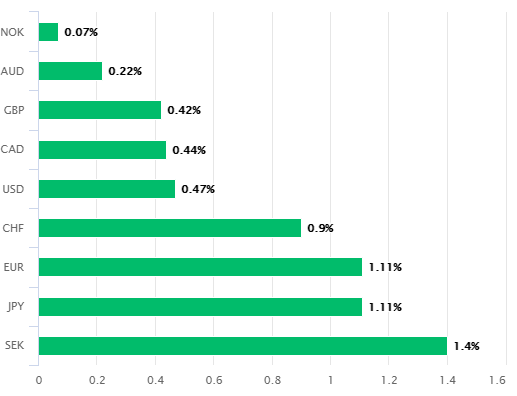 This has seen data measuring New Zealand's economic activity begin to normalise in recent months, with third-quarter GDP figures indicating the economy was 0.4% larger in the three months to the end of September 2020 than it was during the same period one year previously.

That makes New Zealand part of a small and exclusive club of economies to have already clawed back output lost to the coronavirus in the first half of 2020.

"Market expectations around more easing by the Reserve Bank of New Zealand (through more quantitative easing, as negative rates have been fully priced out) are likely to stay muted after the inflation reading. This could limit NZD downside in the near term," says Francesco Pesole, a strategist at ING. "NZD/USD may come under some pressure on the back of choppier risk sentiment and could move back into the lower half of the 0.71-0.72 range."

Final quarter inflation data gave the latest demonstration of Kiwi resilience last week when the main consumer price index came in at an annualised 1.4%, which is still some way below the 2% midpoint of the Reserve Bank of New Zealand (RBNZ) target but much higher than equivalent measures in some parts of Europe, notably the Eurozone. Eurozone inflation has fallen back and remained below zero since the onset of the pandemic.

Resilient inflation offers the RBNZ scope of seeing its target met sooner rather than later and could vindicate Kiwi policymakers for stepping back from a negative rate policy in November. Since then the market has abandoned expectations of any further rate cuts.

The RBNZ's policy pivot and proliferation of promising coronavirus vaccines has made the New Zealand Dollar an outperformer but analysts are warning of risks coming from overseas where vaccination campaigns are being held up in Europe and concerns are rising about whether lawmakers in Washington will act to support the U.S. economy.

"While New Zealand seems to be swimming against the global tide at present (thanks to successful COVID management and generous macro-policy support), the global backdrop warrants caution," says Miles Workman, a senior economist at ANZ. "US developments will drive NZD/USD." 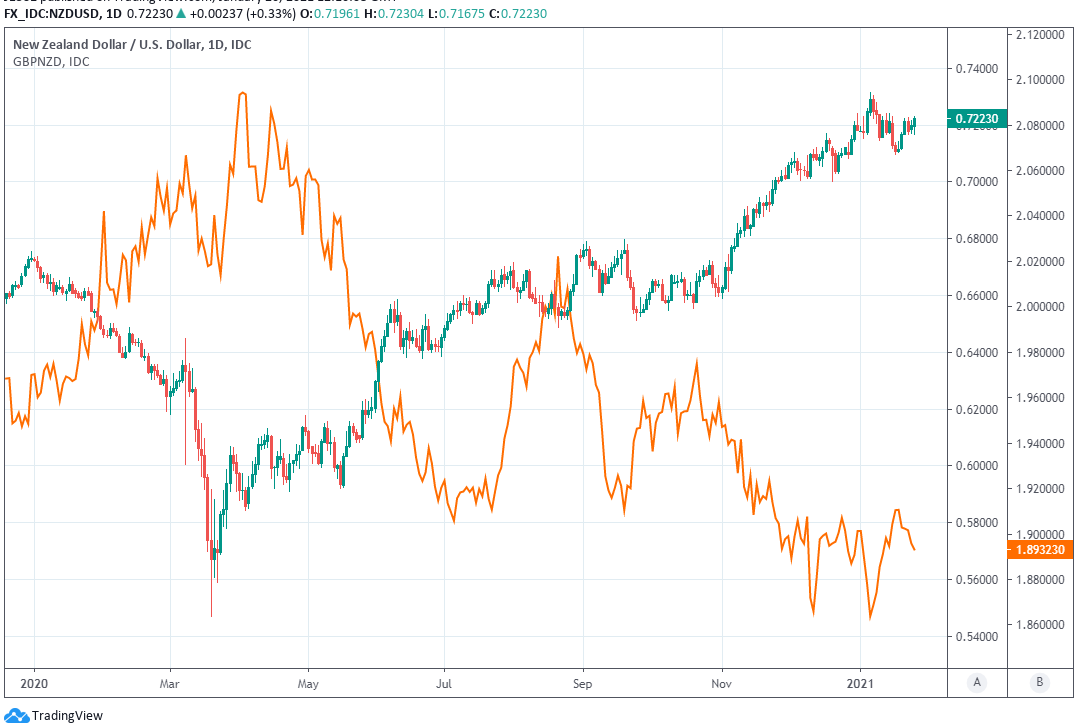 Delays in getting supplies of the Astrazeneca vaccine to European countries is further threatening an already-awry EU bid to have 70% of the bloc's adult population inoculated by September while President Joe Biden's $1.9 trillion stimulus proposal is increasingly vulnerable Republican Party politics.

Biden needs the support of ten Republican Senators to get his bill through Congress and for it to become law although some have already indicated that they would like to see the size of the proposal reduced and the Senate is not expected to even begin looking at it in earnest until at least next month.

Vaccine delays and limited fiscal support for U.S. households are ongoing short and medium-term threats to sentiment which are expected to remain background influences on the currency market.

"Resilient export values throughout the pandemic helped to boost New Zealand’s trade surplus and is supportive for NZD. But we are cautious that NZ’s exports are more exposed to the US, UK and EU (compared to Australia). This exposure may cap NZD gains," CBA's Haddad warns.