The New Zealand Dollar remained an outperformer on Tuesday as investors continued to reward a brighter domestic economic backdrop that may remain a headwind for the Pound-to-New Zealand Dollar rate even if the UK government is successful in securing a Brexit trade deal.

New Zealand's Dollar was the second best performing major currency on Tuesday the top outperformer for the recent month despite having cooled its heels last week, with gains building on a favourable market reappraisal of both the Reserve Bank of New Zealand (RBNZ) interest rate trajectory as well as the global economic outlook.

November's policy update from the RBNZ, coming on the back of a U.S. election which looks set to remove President Donald Trump from the White House, was a gamechanger for the Kiwi although the antipodean unit's prospects have been further burnished by the advent of coronavirus vaccines.

Britain was first to administer a coronavirus vaccine in a non-research setting Tuesday, marking the beginning of a global rollout that could make redundant the destructive measures favoured for containment so far, while cementing in place a fledgling global economic recovery.

"Global risk sentiment has stalled for now but NZ commodity prices continue to rise and the domestic economy remains resilient. By year-end, we target 0.7200," says Imre Speizer, head of NZ strategy at Westpac. "So far the pullback of the past two days appears to be only a mild correction to an uptrend which remains intact." 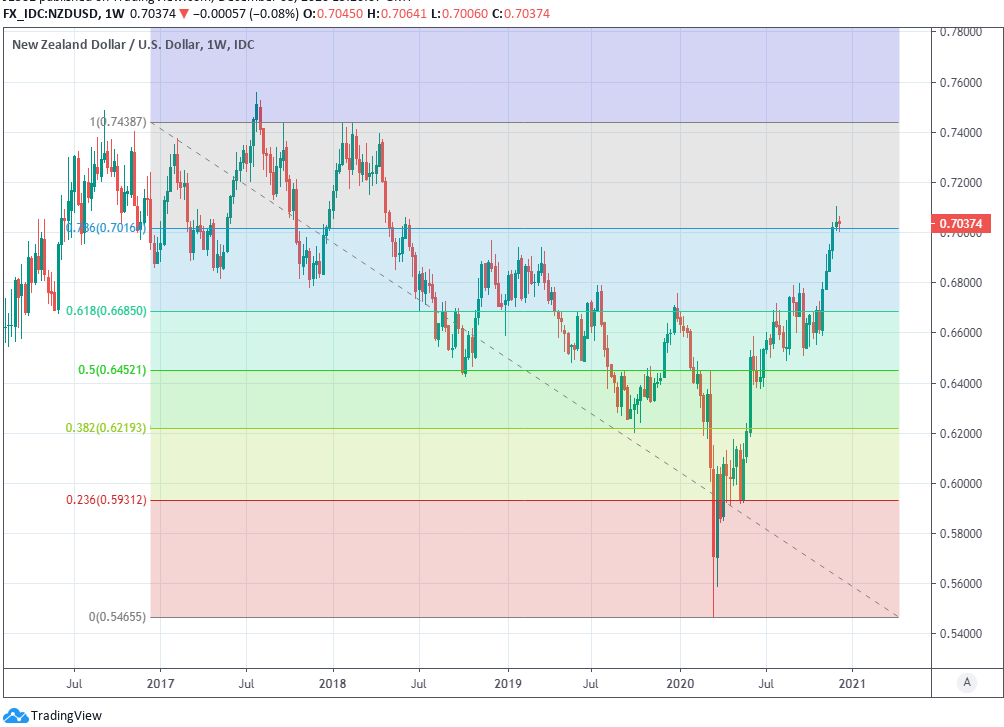 With China having been first to contract and then recover from the coronavirus, it's economy is leading the global recovery and providing an additional tailwind to its largest trade partner New Zealand by further aiding all-important commodity prices higher. This, New Zealand's own superior virus containment and a comparatively healthier pre-pandemic financial position have all helped to also make the country's domestic economy a developed world bright spot and outperformance story in the currency market.

"Annual building consents reached a 46-year high [in October] on the back of strong growth in multi-unit dwelling consent issuance. Core Crown tax revenue for the four months to October 2020 was $2.9 billion (10.9%) above forecast, mainly owing to above-forecast GST, source deduction and corporate tax revenue," says New Zealand's Treasury, in its latest weekly economic update. "Commodity prices rose slightly (up 0.9%) in the November ANZ World Commodity Price Index, with softening dairy prices (down 0.6%) more than offset by increased meat (up 1.7%), horticulture (up 3.0%) and aluminium (up 7.0%) prices (Figure 4)."

New Zealand's strong domestic story and high exposure to a recovering global economy have enabled the RBNZ to step back from the brink of a negative interest rate policy and helped lift the Kiwi Dollar sharply. But Westpac sees the Kiwi having scope to rise even further ahead of year-end, which has implications for a Pound-to-New Zealand Dollar rate that has already suffered from Kiwi strength and a nervous breakdown over the Brexit process in the last month. 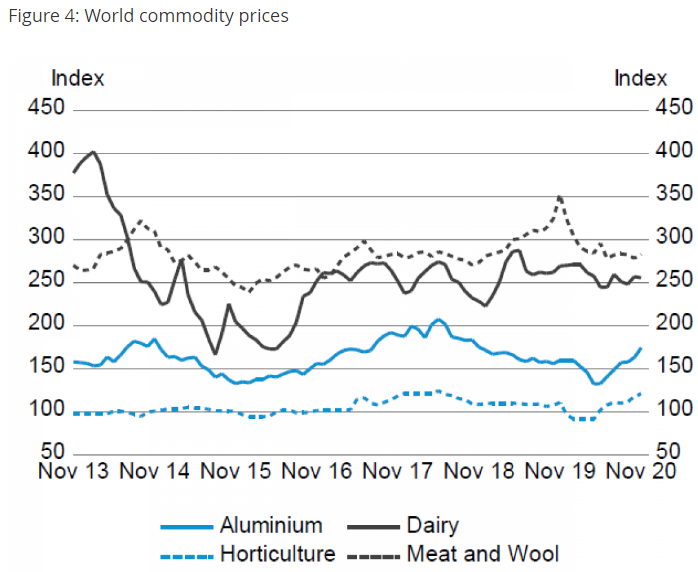 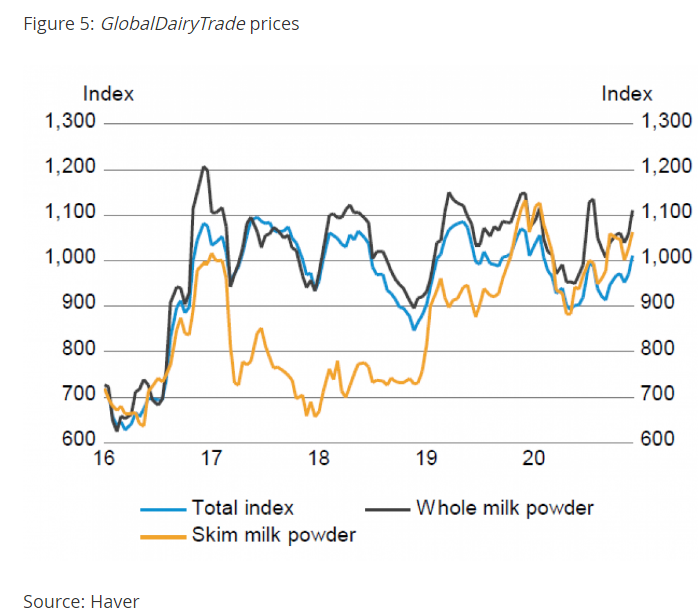 Westpac's forecast of 0.72 for NZD/USD by year-end implies a GBP/NZD rate of 1.8472 in the absence of a recovery by the main Sterling exchange rate GBP/USD from Tuesday's levels, which depends heavily on whether the UK government is able to agree a Brexit trade deal with the EU.

The rub for Sterlingis that many analysts including those Commonwealth Bank of Australia anticipate that a deal will only lift GBP/USD as far as 1.36. Any post-Brexit deal GBP/USD rate of 1.36 would still leave the Pound-to-New Zealand Dollar rate struggling to keep its head above water in a world where NZD/USD is trading around 0.72, as a combination of these two exchange rates implies a GBP/NZD rate of 1.88.

That's a fraction below Tuesday's levels and demonstrates the extent to which New Zealand Dollar strength could be a burden for the Pound-to-New Zealand Dollar rate ahead even in the most optimistic of scenarios. Meanwhile, Brexit talks were continuing Tuesday after Prime Minister Boris Johnson set off for Brussels in a last minute bid to iron out differences keeping the two sides from an agreement, although time is running short with Thursday's European Council summit considered to be the last opportunity for EU leaders to collectively review and sign off on anything.

"Fiscal flexibility is also greater here and that reduces the odds of the OCR having to go into negative territory. This in turn has been and will continue to be reflected in a higher than-otherwise NZD," says David Croy, a strategist at ANZ. "We have upgraded our NZD/USD forecast and now expect the Kiwi to drift higher towards 0.74 over 2021. That’s largely a story of USD weakness, fuelled by improving global growth and easy monetary conditions in an environment where central banks will not want to be too hasty with policy normalisation." 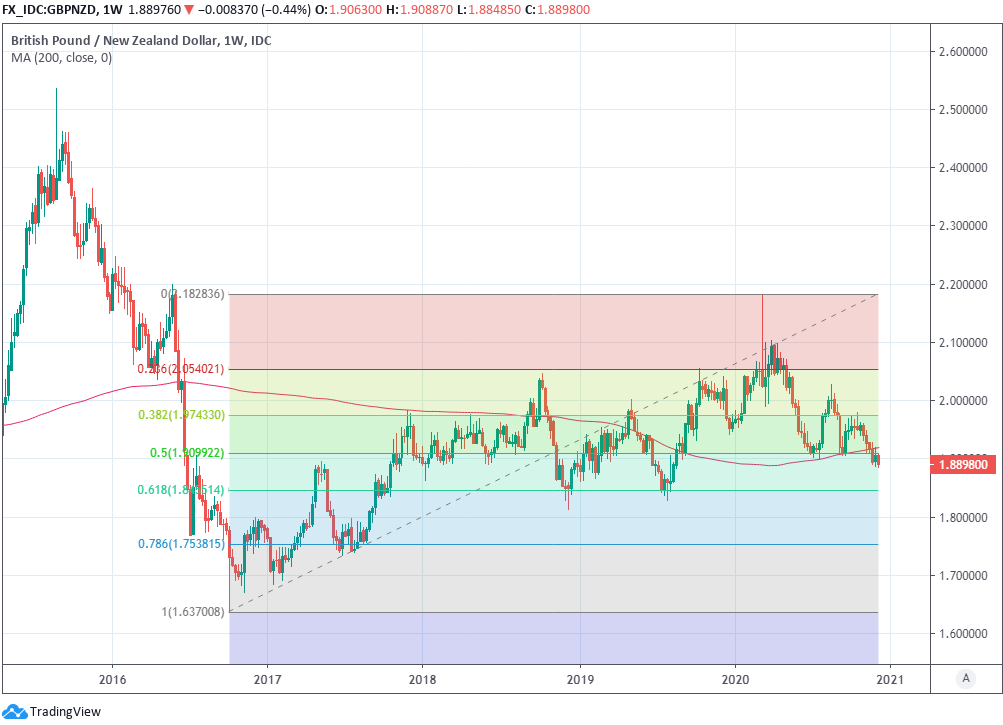