Trade negotiations between the UK and EU were set to resume before the weekend on Wednesday, according to multiple reports, barely a week after Prime Minister Boris Johnson had called an end to them and claimed to be headed for a ‘no deal’ Brexit from the transition period.

"We have studied carefully the statement by Michel Barnier to the European Parliament this morning. As the EU’s Chief Negotiator his words are authoritative. The Prime Minister and Michael Gove have both made clear in recent days that a fundamental change in approach was needed from the EU from that shown in recent weeks," the UK government says, in an afternoon statement. "Lord Frost discussed the implications of this statement and the state of play with Mr Barnier earlier today. On the basis of that conversation we are ready to welcome the EU team to London to resume negotiations later this week. We have jointly agreed a set of principles for handling this."

Sterling had proven remarkably resilient to the ‘no deal’ Brexit threat and enough so to suggest investors hadn’t really taken it very seriously at all, although Wednesday's strong performance does beg to differ with the latter.

Sterling rose against all major rivals but gained more than one percent against half of them, which were significant intraday moves, although the Pound-to-New Zealand Dollar rate climbed only 0.30% amid simultaneous outperformance by antipodean commodity currencies.

“There are a growing list of negatives for the outlook, including the rise in virus cases in Europe and lockdowns in UK regions, but the market has so far shrugged them off. With those risks well flagged and the market now at least aware of them, the focus in the short term may instead be on the more optimistic mood music in UK-EU talks,” says Jordan Rochester, a strategist at Nomura. “We still expect a deal to perhaps provide a “buy the rumour, sell the fact moment” and GBP to underperform in the medium term. But we believe now is the time to buy into the potential for a last-minute deal before mid-November and with it we expect a higher GBP in the short term at least.” Anonymous officials were cited for claims that both sides are now aiming for a mid-November political agreement which would give way to a legislative process that’s currently thought to have only until year-end to be wrapped up.

The two sides have clashed for months over differences on so-called level playing field commitments including but not restricted to those involving state aid for companies, in addition to European access to British fisheries.

"Significant gaps remain between our positions in the most difficult areas, but we are ready, with the EU, to see if it is possible to bridge them," the UK government says in Wednesday's statement. "For our part, we remain clear that the best and most established means of regulating the relationship between two sovereign and autonomous parties is one based on a free trade agreement."

It’s not clear which areas the lingering differences relate to, or even if there are really any differences outstanding. It’s widely said that each side needs to compromise for a trade agreement to be reached and, for the sake of political interests on either side, this might necessitate some elaborate choreography.

“A few months of no-deal Brexit could finally encourage both parties to make decisive concessions to reach an agreement as the UK but also Germany, France, the Netherlands and Ireland (four of the most vulnerable EU countries to Brexit) would experience the real economic cost of a no-deal. To mitigate the economic impact of a no-deal, we can assume that the EU would offer emergency financial assistance to the four mentioned EU member states and that the United Kingdom would resort to further monetary policy measures,” says Christopher Dembik, head of macro analysis at Saxo Bank. "We think the currency market is right, there will be a deal."

Sterling outperformed as investors celebrated the seemingly improved prospect of a deal, although the Kiwi and other commodity currencies also clocked up strong gains given a favourable environment for risk assets. 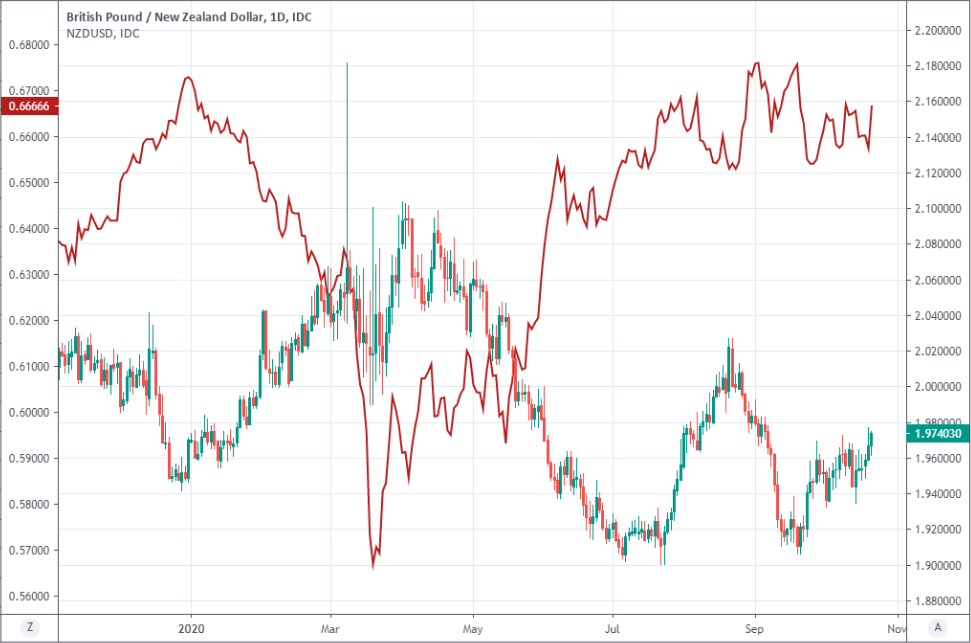 “The second wave of infections is different to the first wave. One policy‑relevant difference is the markedly lower number of deaths despite much higher new infections. This difference is particularly visible in the US, the UK and the four largest Eurozone economies (Germany, Italy, France and Spain),” says Carol Kong, a strategist at Commonwealth Bank of Australia. “Fiscal‑monetary coordination will be crucial to determining the pace and strength of the economic recovery. Fiscal policy will take the driver’s seat to steer the global economy through this ‘long and difficult ascent’. But for this ‘shot’ to be effective, fiscal support needs to be sufficient, timely, and not be withdrawn prematurely.”

Currencies, and investor risk appetite in general, have been almost impervious to increasingly onerous restrictions being rolled out in European economies where second waves of coronavirus infections have grown larger than those seen in the initial stage of the pandemic.

GBP/NZD overcame technical resistance around 1.9650 to trade back above 1.97 but could struggle if its gets back to the 2.0 level, according to ANZ, which might curtail the rally in the absence of an actual trade agreement with the EU.

"NZD/GBP] arguably has more upside given Brexit fears," says ANZ's David Croy in a morning note. “The Kiwi has been fighting back since the wee hours of this morning as the USD takes a hit. It’s all part and parcel of the myriad cross-currents at play either side of our 0.65 [NZD/USD] forecast.” 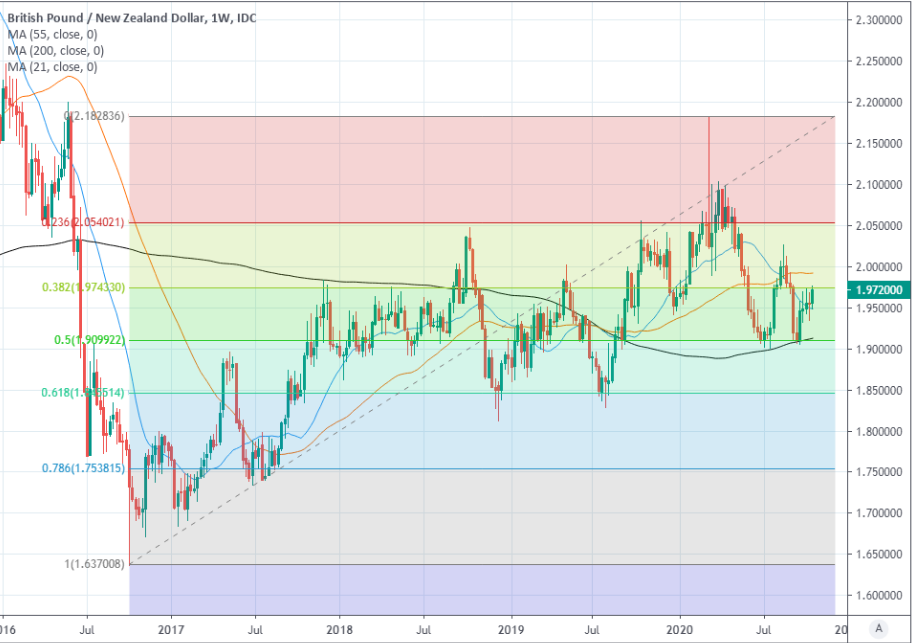