We are certainly seeing a down day, with investors seemingly unimpressed with the U.S. Federal Reserve which at their July policy meeting opted to keep policy settings unchanged, instead only promising to offer further support if required. This has proved to be something of an anathema for investors who have shown an addiction to the easy money coming out of the world's de facto central bank since the onset of the coronacrisis.

Furthermore, concerns that the U.S. economic recovery has been blunted by a resurgence of covid-19 cases in some states has weighed on sentiment, as well as the ever rising global infection load.

Concerns are rising that Europe could also see a second spike in cases, while lacklustre earnings results are also weighing - which is understandable given investors are only now looking at the books of companies which have had to trade through the sharpest and most aggressive economic slumps on record.

"A double-digit percentage decline in the German economy and abysmal results from Lloyds have put the cat among the pigeons this morning. Stocks are firmly in the red, with the FTSE 100 taking it on the chin as Lloyds drops 8% and heavy losses in Europe as well as investors fear that more bad news will be on the way," says Chris Beauchamp, Chief Market Analyst at IG.

All this leaves the New Zealand Dollar looking vulnerable, and we maintain a view that as long as markets continue to struggle so too will the Kiwi.

The Pound has taken advantage of this weakness to record five consecutive days of gains which should become a sixth based on current performances. 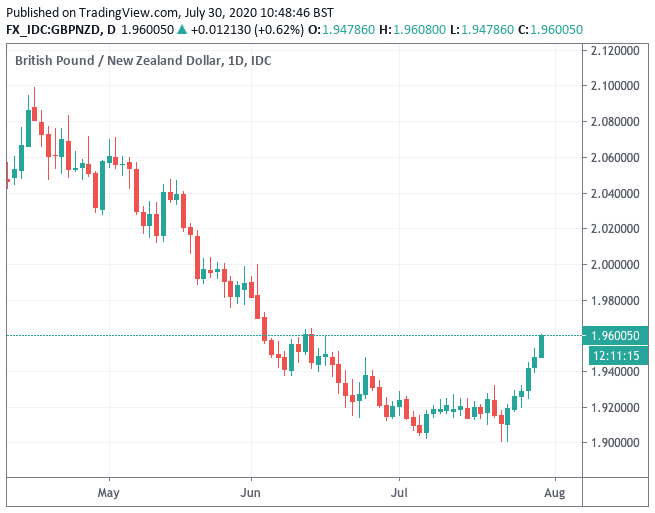 The Pound-to-New Zealand Dollar exchange rate has risen from last week's low at 1.90 - which now looks like a formidable layer of support considering the bears tested this on two occasions and failed last week - to trade back at 1.9596 at the time of writing.

Momentum in the exchange rate remains positive with the Relative Strength Index - a key measure of momentum - at 66.25 which is a bullish reading while not being overbought. When the RSI reaches 70 on the daily chart we would suggest the rally is starting to overheat and some consolidation is in order.