The Pound-to-New Zealand Dollar rate has bottomed out but could now find itself consolidating in a narrow range without progress or failure in the Brexit process that would otherwise guide the next steps for Sterling.

Pound Sterling was higher against all major currencies on Wednesday as the British currency caught up with the rest of the class after having underperformed in the prior session when it was revealed that the economy did not awaken from its 'lockdown' induced coma in May.

Wednesday's price action came in a supportive market for risk assets as progress in pursuit of a coronavirus vaccine offset for many investors the mounting risks to the outlook that stem from a deterioration in relations between China, the U.S. and others in the world.

But the Pound-to-New Zealand Dollar rate had edged higher in the prior session even as Sterling slipped against other majors, and despite Office for National Statistics data undermining the idea of a v-shaped recovery for the economy.

"May GDP rose a modest 1.8% m/m as the economy began to emerge from lockdown. That left the 3mth/3mth reading at -19.1%, highlighting the huge degree of stress the economy has been under," says Liz Kendall, a senior economist at ANZ. 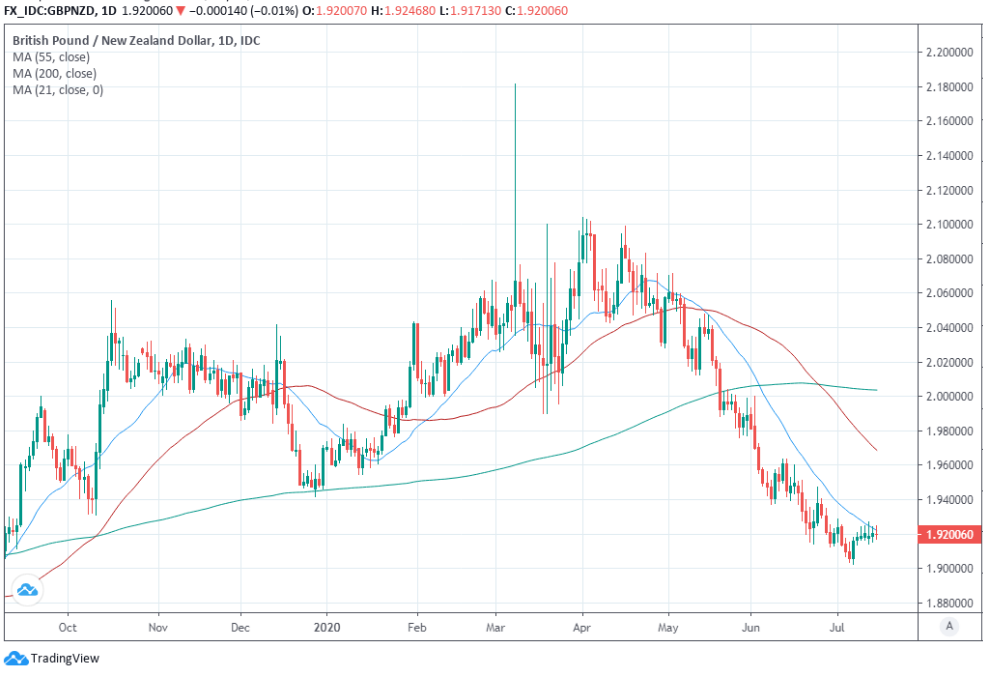 Above: Pound-to-New Zealand Dollar rate shown at daily intervals with 21, 55 and 200-week moving-averages.

GBP/NZD had edged higher for seven days on the bounce Wednesday, though its overall range was narrow, and through a period that has seen deadlock in the Brexit talks buttressed as a potential headwind by suggestions from both sides that a 'no deal' exit might still happen at year-end.

Desensitisation to the absence of progress in trade talks and lingering prospect of a relationship governed by World Trade Organization (WTO) terms is well demonstrated by Pound-to-New Zealand Dollar rate price action.

"Weak UK GDP data weighed. However, even that was insufficient for GBP to match the NZD’s weakness. A break below support at 0.5190 is needed to open up room for a move to 0.5140," Kendall says of the NZD/GBP rate. "The NZD underperformed following yesterday’s 2041 syndication."

Kendall says a GBP/NZD rise above 1.9267 would put a return to 1.9455 in the pipeline and Sterling was nearing the former level on Wednesday. But achieving the latter might require either a breakthrough in the Brexit talks or a marked deterioration of the Kiwi Dollar's fortune.

The Kiwi has recovered handsomely off its March lows in recent months, placing an already troubled Sterling under pressure, but it's stalled since early June while the Pound has since begun to recover lost ground. 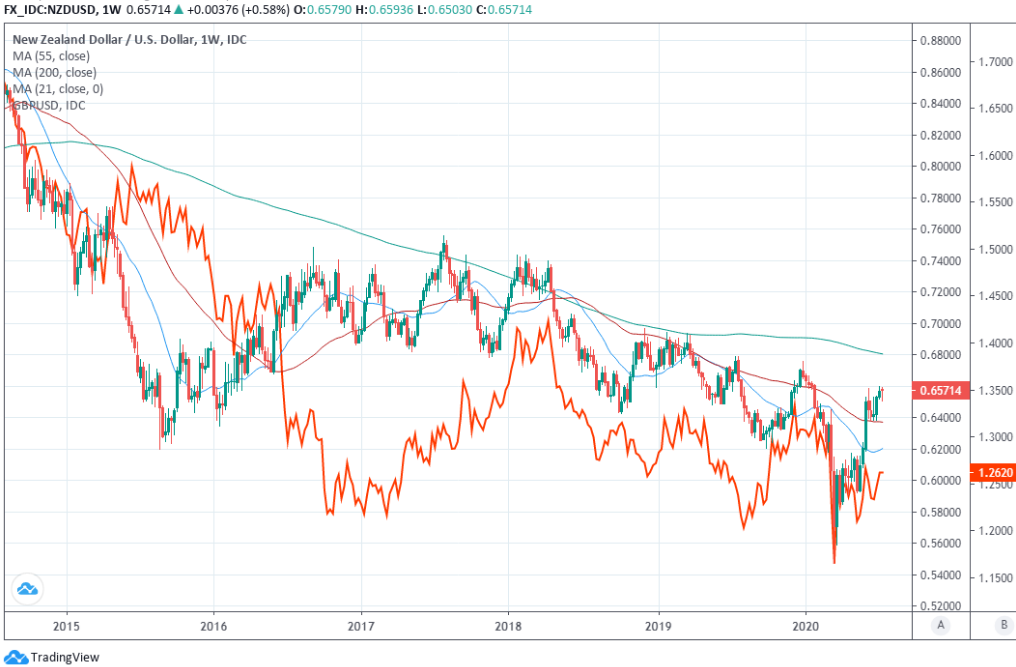 Above: NZD/USD and GBP/USD (orange line) rates shown at weekly intervals with 21, 55 and 200-week moving-averages.

Sterling's June recovery against the U.S. Dollar coincided with the stall in NZD/USD and has helped to stabilise the GBP/NZD rate.

This could mean a short-term bottom has formed, while the more recent desensitisation to adverse Brexit rhetoric has begged the question of what it might take for the Pound to fall beneath its recent lows at 1.90.

The answer is a catalyst that leads to another decoupling from the major currency pack. Or put differently, a catalyst that ensures GBP/USD losses outstrip those of NZD/USD, while lagging it in any upturn. GBP/NZD is an amalgamation of NZD/USD and GBP/USD.

Mechanically, the GBP/USD rate could fall all the way back to its June low at 1.2250 and so long as this came alongside a countervelling slide by NZD/USD back to 0.64, the Pound-to-New Zealand Dollar rate would fall only as far as 1.9142 and the recent low would be left intact.

Such GBP/USD losses would need to occur in the absence of NZD/USD declines in order for Sterling to set a new bottom against the New Zealand Dollar and short of a calmitous turn in the UK coronavirus containment, getting to such a stage might require an all out failure of the Brexit talks.

"Immediate upside pressure will be maintained while the currency pair remains above the 1.2480 July 14 high on a daily chart closing basis. Minor support below it can be seen along the 55 day moving average at 1.2441 and also along the March-to-July support line at 1.2388. Below the next lower 1.2251 late June low lie the April low at 1.2163 and the May trough at 1.2072," says Axel Rudolph, a senior technical analyst at Commerzbank, of the GBP/USD rate. 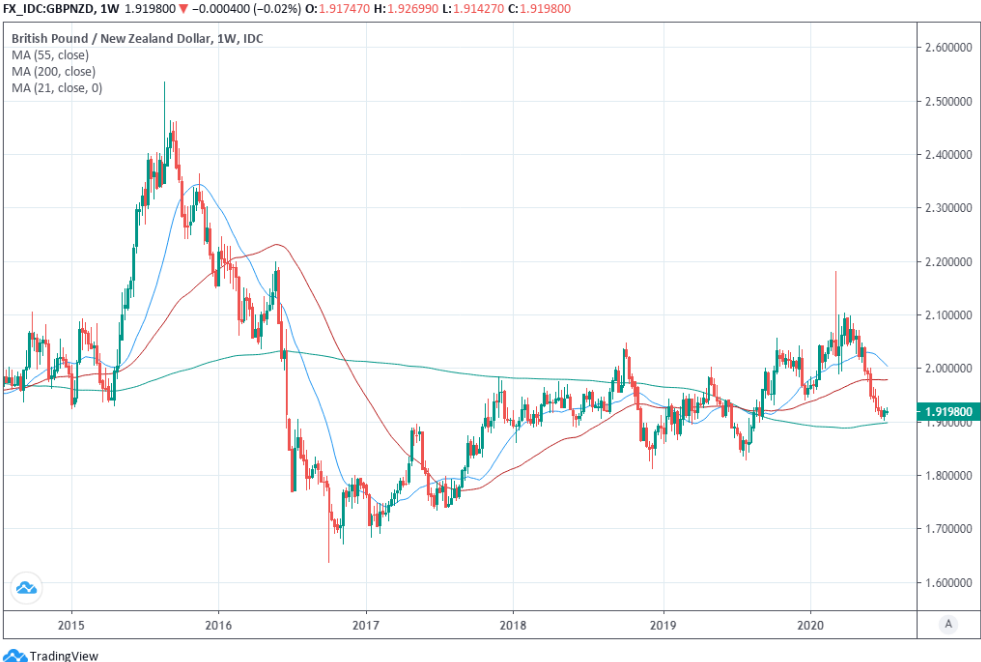 Above: Pound-to-New Zealand Dollar rate shown at weekly intervals with 21, 55 and 200-week moving-averages.

A Brexit failure that sends GBP/USD back to its June low would send the Pound-to-New Zealand Dollar rate down to 1.8560 if it comes as the Kiwi tests recent highs at 0.66 against the U.S. Dollar.

But losses would be even greater, taking Sterling down to 1.8148 if the Kiwi happens to break above recent highs and test 2020's peak near 0.6750 as its Australian counterpart has been attempting to.

Meanwhile, a breakthrough that lifts GBP/USD back to 1.31 or above would lift the Pound-to-New Zealand Dollar rate back to 1.9407 even with the Kiwi testing 0.6750, and as far as 1.9848 if NZD/USD fails to better its earlier high.

GBP/NZD gains would be even larger if accompanied by Kiwi underperformance or if Capital Economics is right about how far GBP/USD could rise.

"Despite the UK government’s refusal to request an extension to the Brexit transition period before the 30th June deadline, sterling has fared well in July so far. This seems to be mostly due to growing appetite for risk, which we think will continue," says Oliver Allen at Capital Economics. "The UK’s future relationship with the EU will surely rise back up the agenda later this year, as the time left to finalise a deal runs out. Our view is that the two sides are more likely than not to agree some kind of deal. Meanwhile, we also think that the recovery in risky assets has further to run. These two factors underpin our forecast that the pound will reach $1.35/£ by year end, up from $1.26/£ now."