The Pound-to-New Zealand Dollar exchange rate was testing a cluster of major support levels on Wednesday and could break to new 2020 lows if they're overcome, although such an outcome requires a catalyst that further undermines appetite for either Sterling or the Kiwi.

Pound Sterling was trading a fraction higher against most major currencies including the Kiwi Wednesday after having underperformed into month-end, and as stock markets and currencies took a risk-averse turn into the North American open, with safe-havens like the Japanese Yen outperforming.

This left the Pound-to-New Zealand Dollar rate trading around the 1.92 handle although gains were fractional, tepid and tentative at best, while coming after earlier losses brought Sterling into contact with a cluster of key support levels that have so-far survived the initial test.

But another bout of weakness in the British currency would risk taking it below those support levels and in the process, teeing it up for even further declines.

Croy and the ANZ team say the 1.9047 threshold is key to the outlook and that Sterling would risk falling nearly -5% to 1.8281 if a daily close below the aforementioned level is sustained rather than reversed.

But it's not just 1.9047 that underpins the Pound-to-New Zealand Dollar rate because there's also the 50% Fibonacci retracement of the post-referendum recovery trend at 1.9094 that has already offered support to Sterling.

In addition, there's a 200-week moving-average down at 1.8972 that could further slow or otherwise frustrate any protracted move to the downside, although the risk is that in the coming weeks Sterling sees the catalyst and garners the momentum to break all three. 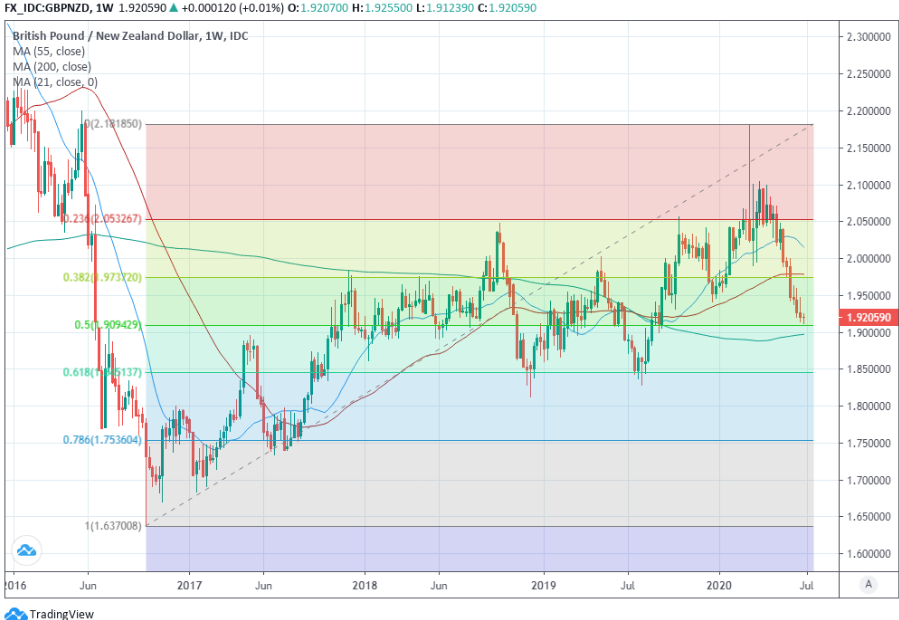 "GBP remains the biggest G10 FX underperformer- the worst performing G10 currency both this month and this quarter," says Petr Krpata, chief EMEA strategist for currencies and bonds at ING. "As the UK government refused to request the extension of the transition period and the form of the UK-EU trade deal (if there is one) remains uncertain, there is scope for meaningful GBP risk premium to increase further, to the levels seen in August last year. Hence, our forecast for further GBP weakness."

The Pound-to-New Zealand Dollar rate traded in a 1.91-to-1.97 range through June after breaking down in May and falling from the 2.06 level that prevailed at the end of April, but there's no shortage of reasons for why it might remain on the back foot through summer and into the autumn.

With the UK lagging other countries in contracting and containing the coronavirus and then reopening the economy, a game-changing improvement in sentiment toward Sterling might only be possible through seemingly unlikely progress in the Brexit trade talks.

Progress might be unlikely given the incompatible objectives on either side of the process, not to mention the recent rhetoric of Prime Minister Boris Johnson and negotiator David Frost, who was promoted to the role of National Security Adviser at the weekend, which he will hold alongside that of Europe Adviser.

PM Johnson said at the weekend the UK could exit the transition period at year-end without preferential trade terms just as the latest and "acclerated' round of talks was about to get underway. Chancellor Angela Merkel said Wednesday the bloc must be prepared for exactly that outcome as she and Germany assumed the rotating European Council presidency, which runs to year-end.

"Do not expect Germany to shift the EU‘s negotiating position. To strike a deal worth its name, the smaller UK will have to soften it’s own stance significantly further," says Holger Schmieding, chief economist at Berenberg. 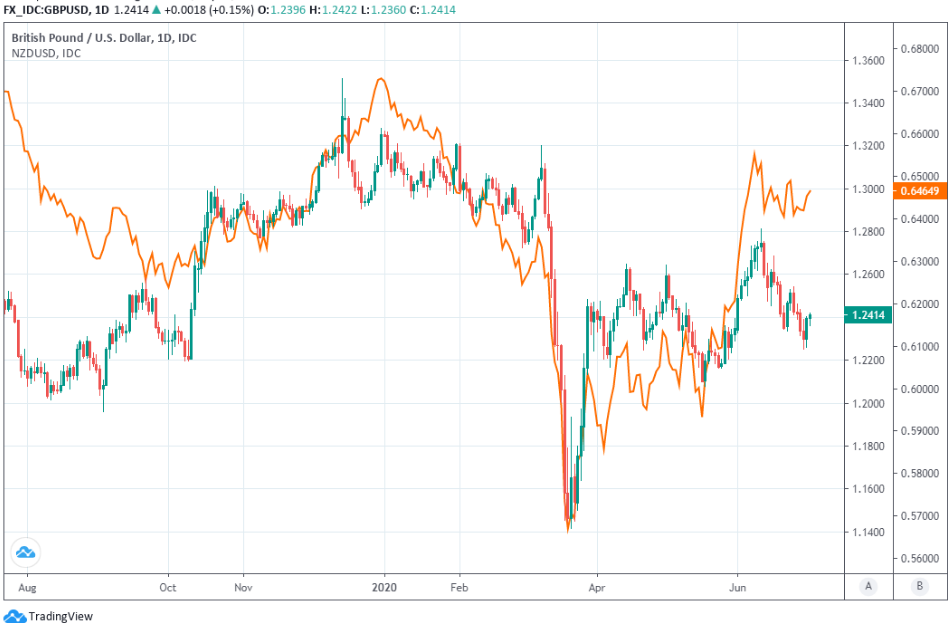 Above: GBP/USD shown at daily intervals, overtaken by the rapid and exuberant recovery of NZD/USD (orange line).

"UK sovereignty, over our laws, our courts, or our fishing waters, is of course not up for discussion. Equally we do not seek anything which would undermine the integrity of the EU’s single market," says David Frost, in a Twitter post ahead of this week's negotiations. "Finally, I want to be clear that the Government will not agree to ideas like the one currently circulating giving the EU a new right to retaliate with tariffs if we chose to make laws suiting our interests."

Negotiators are attempting to agree the "broad outline" of terms this month but neither sides' position on the impediments to progress has changed and the danger is that, with four-to-five months still left on the clock, July and this latest round of negotiations leave only continued deadlock in their wake.

Further deadlock and a ticking clock could see investors penalising the Pound with the kind of increased "risk premium" expected by ING, which would see the Pound trading at an increased discount to estimates of its fundamental value.

ING forecasts a Pound-to-New Zealand Dollar rate of 1.9393 in three months followed by a decline to 1.9275 in time for year-end, which assumes that "some form of trade deal" is agreed by October but implies only a most modest degree of upside for Sterling in the event that this happens. In other words, the potential downside for the Pound-to-New Zealand Dollar rate is likely far greater than the prospective upside that might be achievable over the coming months.

This is despite the solid support offered by the cluster of technical levels that barred the GBP/NZD path lower on Wednesday and in part because of a strong and ongoing performance by the commodity and risk sensitive New Zealand Dollar. Kiwi Dollars have been in demand after the country squared the coronavirus away before most others, enabling the economy to reopen earlierand as investors continued to bet that a global recovery will come quick and be enough to reverse 2020's global economic losses.

"The ebbs and flow of the NZD continues to primarily be driven by offshore events and broad market sentiment, but that may change over coming months, with the NZD now in the RBNZ’s sights. We don’t think foreign asset purchases have been sufficiently priced in; more clarity is coming in August. Foreign asset purchases make sense given the small size of the NZGB market; a lower NZD would boost the recovery," says ANZ's Croy.