The British Pound maintains its multi-week process of depreciation against the New Zealand Dollar and studies of the market suggest further losses are likely in the foreseeable future.

The Pound-to-New Zealand Dollar exchange rate is quoted at 1.9150 at the time of writing, a loss of 0.30% on the day's opening which places it on the cusp of recording a new 9-month low.

Those with a view on transacting in Sterling and Kiwi should be aware that at present there remains little by way of technical indicators in the market that the downtrend is likely to fade. As such, further downside remains the favoured stance on the exchange rate.

"The downside prevails as long as 1.9256 is resistance," says the most recent analysis of the exchange rate's daily chart put out by analytics information providers Trading Central. 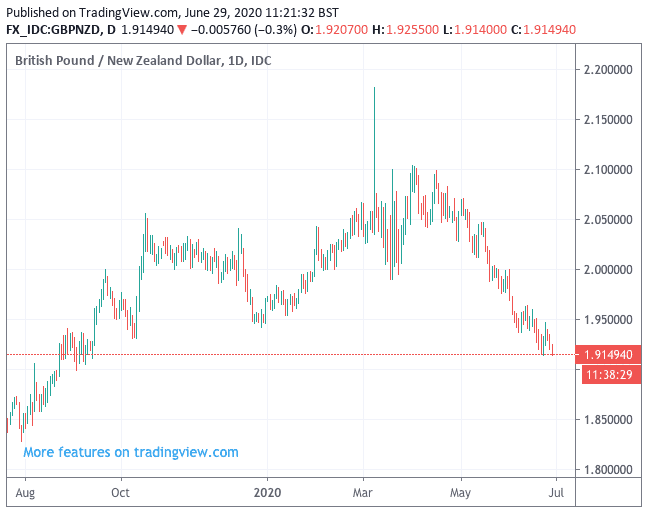 "The RSI is below 50. The MACD is negative and below its signal line. The configuration is negative. Moreover, the pair is trading under both its 20 and 50 MAs (respectively at 1.9228 and 1.9227)," says Trading Central.

Trading Central identify support at 1.9117 as being the first target the market might aim for, followed by 1.9080.

The New Zealand Dollar appears to have shaken off the turbulence invoked by the Reserve Bank of New Zealand who last week said it is prepared to do more stimulus if needed. The rub for the Kiwi was the Bank also saying it's working to ensure a wider array of tools become available in the months ahead, including a negative interest rate as well as a capacity for "foreign asset purchases" that would enable the bank to dump large clips of New Zealand Dollars on the market.

The New Zealand Dollar soon shook off the negativity surrounding the RBNZ's threat to pursue negative interest rates if needed, with the market judging that this to be a case of 'jawboning' as opposed to a signal of intent.

This leaves the NZ Dollar to react to the global financial market picture which remains broadly supportive. A multi-week recovery in stock markets and recovery prices remains broadly intact, despite running into some turbulence over the course of the past two weeks.

"G10FX is an equity trade. The typical high-beta currencies like AUD/NZD/CAD have led the G10 complex in performance against the USD amid high and stable correlations to equities," says Mark McCormick, Global Head of FX Strategy at TD Securities.

Fears of a second major spike in covid-19 cases in the U.S. remains the market's key concern, and should the situation continue to deteriorate we could see markets come under serious pressure. Should such a scenario emerge we would expect a potential change in sentiment on the New Zealand Dollar which maintains a positive correlation with global investor sentiment.

For now however, the transmission of fears from markets into currencies is looking relatively contained.

"The Covid19 acceleration in the US finally became sufficiently alarming to knock US equities into something resembling a consolidation, the technical situation is looking pivotal at current levels for the risk of a larger consolidation episode. Transmission into FX has been weak, which looks relatively par for the course. The currencies that should prove most sensitive to any deepening concern from this worsening outbreak are those that have bounced most enthusiastically with the comeback from the lows and those pricing a global rebound and reflation," says John J Hardy, Head of FX Strategy at Saxo Bank.