- GBP top performer Friday, this week, but correction may loom.

- But GB yields defying gravity of global market, could correct.

- RBNZ might shift to neutral in Feb, Westpac says, but virus a risk.

The Pound risks a downward correction against the New Zealand Dollar in the coming days if British government bond yields realign with their falling global counterparts, one that could be further encouraged by the Reserve Bank of New Zealand (RBNZ) if shifts into a "neutral" gear in line with new Westpac forecasts.

Sterling is the best performing major currency ahead of the weekend and for the week overall due to a spike in government bond yields that was instigated by a Bank of England (BoE) decision to leave rates at 0.75% in what turned out to be not nearly as close a call as markets had thought it'd be.

Two-year bond yields rose sharply in the wake of the decision as their Kiwi counterparts clocked up only modest gains ahead of next month's RBNZ decision, leading the Pound-to-New-Zealand Dollar rate higher. 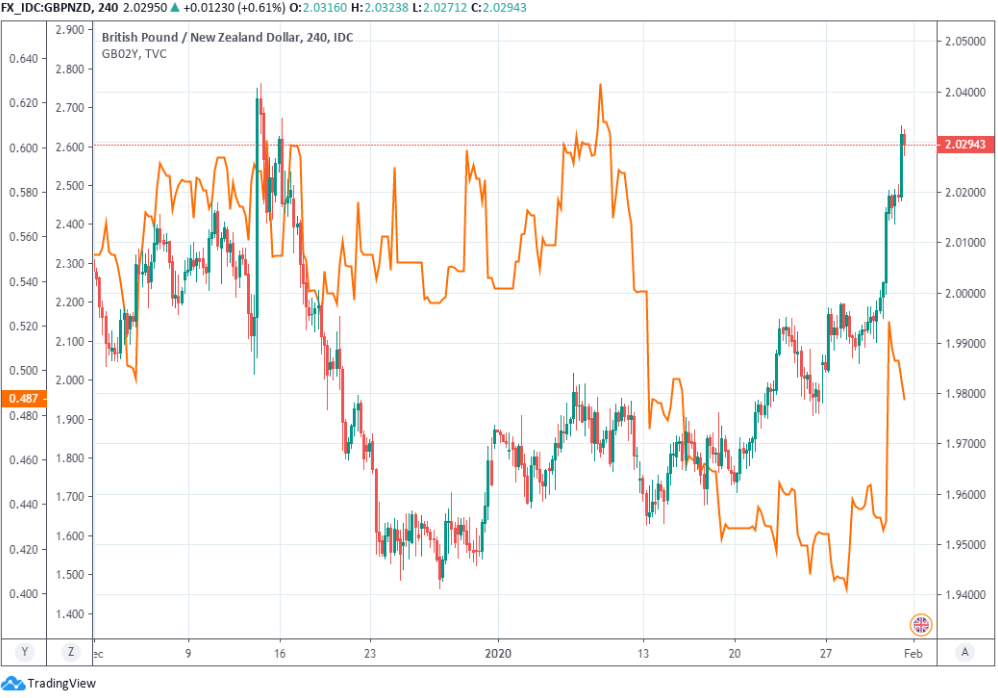 British and Kiwi yields have defied the gravity that's pulled other major economy yields lower this week as investors become increasingly concerned about the size of the possible economic impact resulting from the international spread of China's new coronavirus. But Sterling's yield has further to correct if it's to realign with those of the U.S. and other economies, which could then portend a downward Pound-to-Kiwi correction.

"The market is proving slow to recognize the risks of a dramatic downgrade to global growth this year as a consequence of the coronavirus outbreak and its effects on global supply chains and consumer activity, even as well all hope for a minimum toll on human life," says Steen Jakobsen, chief economist at Saxo Bank. "Expect significant repricing of short-term policy rates (read: the Fed) down to protect yield curve steepness. By the end of February, as much as 100 basis points lower global growth should be fully priced and companies will submit much lower guidance on this disruption (Apple started yesterday)." 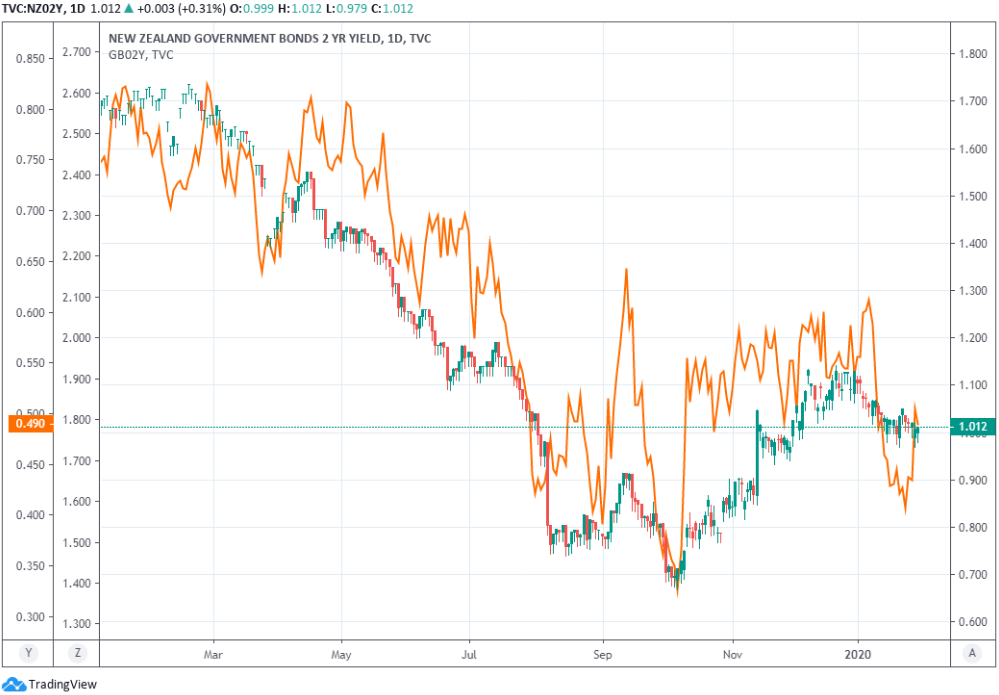 Some institutions including Saxo Bank were already flirting with the idea of placing the British currency up for sale even before Friday's moves, due to doubts over the sustainability of the ongoing Sterling rally, although the argument favouring a correction in the Pound-to-Kiwi rate grew stronger late Thursday when Westpac said it sees the RBNZ as likely to move into a "neutral gear" in terms of its own interest rate policy next week.

"We expect the RBNZ will abandon its strong easing bias and move to a more neutral monetary policy outlook," says Bill Evans, chief economist at Westpac. "The RBNZ will also take comfort from the general improvement in global economic sentiment over recent months, even though the actual economic data remains weak and the coronavirus poses a new set of uncertainties." 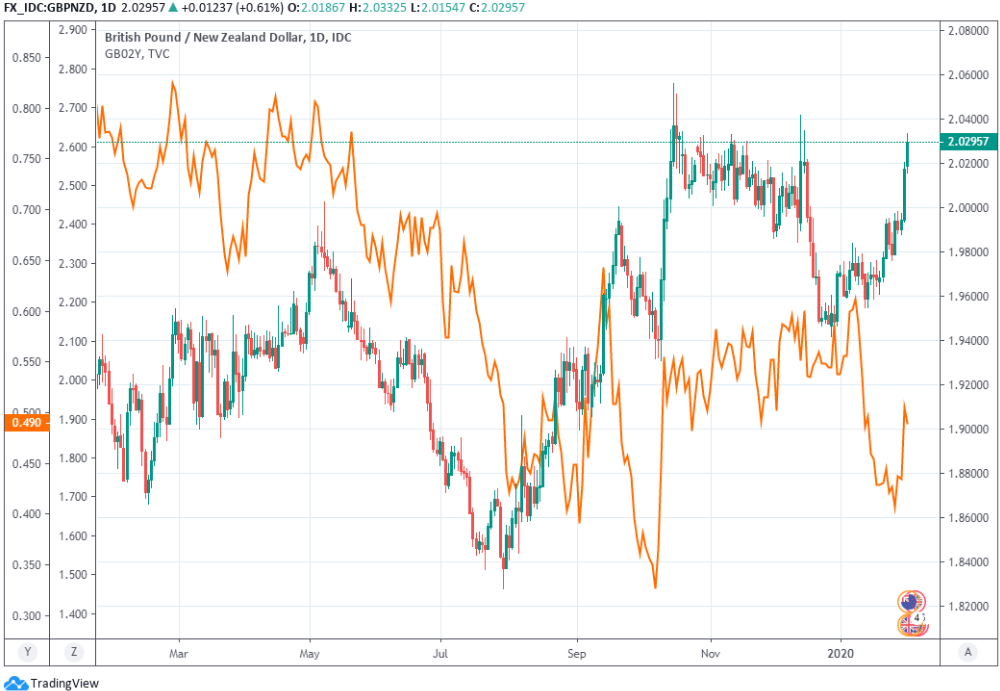 The RBNZ cut its cash rate three times last year to fend of an economic slowdown that threatened to further reduce already-below-target inflation pressures, with those rate cuts not only wounding the Kiwi Dollar but also prompting investors to price-in a further easing of monetary policy for 2020. However, investors have been rethinking those wagers in recent months and have recently priced-out of the Kiwi the earlier residual prospect of more rate cuts being announced this year.

Pricing in the overnight-index-swap market implied on Friday, a February 12 cash rate of 0.98% and a November 11 cash rate of 0.84% for the RBNZ. Those numbers are up from 0.59% and 0.49% respectively on 10 October, 2019 - the day before the U.S.-China 'phase one deal' was announced. Current pricing suggests strongly that markets see only a minor probability of another rate cut this year and that's not until near to year-end, although a February pricing-out of that potential might still be positive for the Kiwi.

"The “virus in the ointment” that has the potential to invalidate our forecasting work is the emerging coronavirus epidemic," Evans warns. "The economic costs to New Zealand will arise not from the virus itself, but from the measures taken globally to try to contain it. Almost 60 million people are already effectively under lockdown in China, and all travel booked through the Chinese Tourism Bureau has been suspended. Around 9,000 tourist visits from China to New Zealand have already been cancelled, and the Chinese group travel market has dried up overnight. Our initial working estimate is that seasonally adjusted visitor arrivals to New Zealand will drop by 5% over the coming three months. That, on its own, would reduce New Zealand GDP by around 0.25 percentage points."