- Bests a struggling GBP as economy and BoE weigh.

- But is increasingly pricing-in BoE cuts from January.

The New Zealand Dollar outperformed rivals including Pound Sterling on Thursday and if recent developments at the respective central banks are anything to go by, it could continue to best its British counterpart for a while yet.

New Zealand’s Dollar topped the major currency league table Wednesday as investors revelled over the possible global economic relief offered by Wednesday’s signing of the long-elusive ‘phase one deal’ to temporarily end the trade war between the U.S. and China. However, there were also other reasons behind the market’s bid for the Kiwi.

“New Zealand’s housing market continues to fire. National house prices rose 1.2% in December to hit 6.6% in annual terms and housing sales surged 12.3% year‑over‑year. The risk is growing the RBNZ won’t have to cut rates again which is NZD positive," says Elias Haddad, a strategist at Commonwealth Bank of Australia (CBA). "USD will continue to trade on the defensive as long as the outlook for the global economy improves."

It’s an open question as to whether the global economy will really benefit from the pact that’s set to suspend trade hostilities at least through the bulk of 2020, but New Zealand’s commodity and China-exposed currency had previously declined against all majors through early January and so was back in demand on Thursday, aided by domestic housing data.

New Zealand’s Dollar underperformed in 2019 but closed the gap between it and rivals in a considerable way by year-end as markets priced-out the once-significant implied probability of further interest rate cuts from the Reserve Bank of New Zealand (RBNZ) this year.

Pricing in the overnight-index-swap market has shifted considerably since the days before the U.S.-China trade deal was first announced on October 11. At the beginning of that month pricing implied a June 24 RBNZ cash rate of 0.49%, suggesting strongly that investors saw a further two cuts to the 1% benchmark as a certainty for the first-half of 2020. And the implied cash rate for November 2019 was at that time just 0.73%, implying investors thought one rate cut was a certainty even before the turn of the year.

However, the U.S.-China trade deal changed all of that while third-quarter economic growth numbers as well as the recent government budget have helped cement the turnaround in the market’s view of the outlook for New Zealand. When combined, those factors have seen the Kiwi go from being the currency market’s biggest ‘short,’ to a much more supportive position. 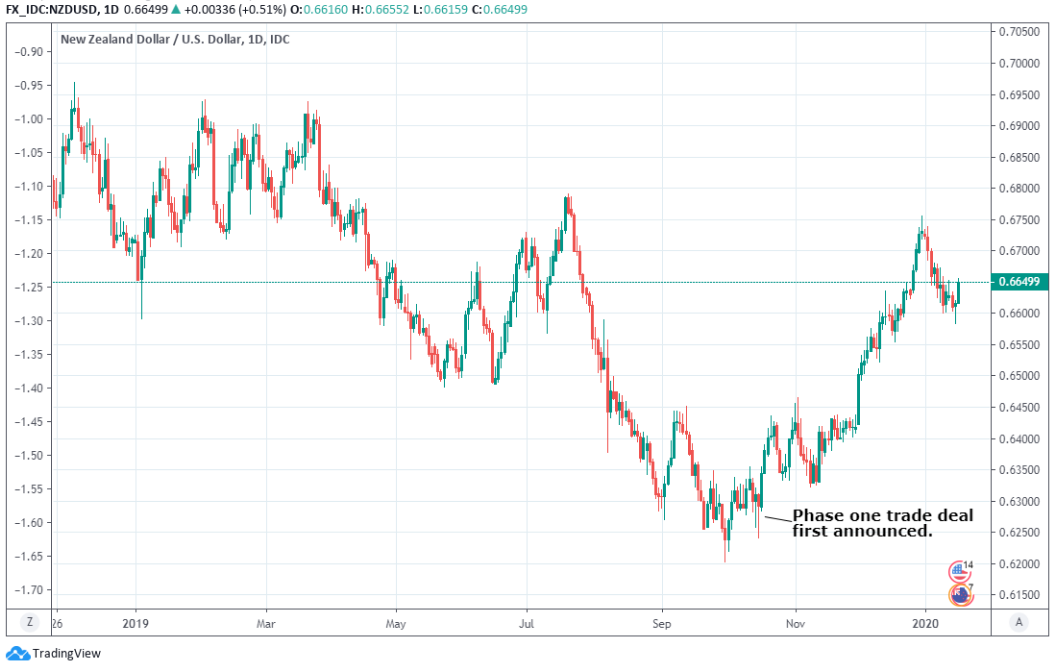 “As investors curtailed their long USD positions in the past few weeks, it is no surprise the NZD appeared as a valid alternative to reallocate their bullish views,” says Francesco Pesole, a strategist at ING. “The RBNZ neutral shift late last year is offering a supportive rate environment compared to its main peer AUD and a medium-term undervaluation still points at upside potential as long as a benign risk environment holds. At this stage, we do not exclude NZD moving into positive territory in the near future."

Third-quarter economic growth was stronger than expected in New Zealand while earlier numbers were also revised higher, in spite of the U.S.-China trade war that left the global economy badly damaged. Meanwhile, the RBNZ revealed in the minutes of its latest policy meeting that it’s less worried about the implications of the tariff fight for New Zealand since the country’s export commodity prices have still risen and boosted national income throughout the conflict. And the government has since announced its first 'Wellbeing Budget' in which it committed to spend a sizeable $10 bn on investment projects over the coming years, which is equivalent to around 3% of GDP.

Investors are no longer ‘short’ the Kiwi Dollar in substantial part because they no longer expect any further rate cuts from the RBNZ this year or next. Pricing in the OIS market now implies a June cash rate of 0.89%, which is slightly lower than the current 1% rate but still some way above the next level down of 0.75%. And the implied the cash rates for subsequent months, particularly toward year-end, are higher than that. In other words, speculators are no longer much of a weight around the ankles of the New Zealand Dollar, which might mean the Kiwi can sustain its Thursday outperformance for a while yet.

“The latest data dump has motivated markets to expect a BoE cut later this month. The OIS market prices in a 65% chance of a cut at the January meeting,” says Mark McCormick, North American head of FX strategy at TD Securities.

Outperformance is entering the pipeline for the Kiwi at the same time as Pound Sterling is at increasing risk of underperforming due to the mounting possibility that the Bank of England (BoE) will cut its own interest rate on January 30. Inflation is well below target and GDP growth was just 0.6% in the 12 months to the end of November, which leaves its substantially below the economy’s estimated 1.25% inflation-producing rate of growth.

The Monetary Policy Committee now appears to have a majority in favour of a rate cut that’s not yet fully priced by the market, with earlier stand-pat-voters having turned ‘dovish’ over the last week. Governor Mark Carney, Silvana Tenreyro and Gertjan Vlieghe all indicated in recent days that they’ll vote for a rate cut at the end of this month if the outlook doesn’t improve, while Michael Saunders and Jonathan Haskell already voted to cut in December. That makes for five-out-of-nine who're potentially in favour of easing and if rates are cut once, there’s no telling what else investors might then price-in.

"Our own view is that the BoE can afford to wait a few months to see if the risks around the labour market materialise, to monitor how the economy performs in the first quarter and to get a better indication of the government’s spending plans due to be unveiled in the Budget on 11 March. However, the MPC’s decision is likely to be close and the PMI prints on the 24th January could be crucial to swaying the final vote in two weeks," says Marchel Alexandrovich, a senior economist at Jefferies International.

The OIS market sees a 0.75% BoE Bank Rate falling to only 0.60% by month-end, which leaves the Pound-to-New-Zealand Dollar rate especially vulnerable to declines in the weeks ahead. It also means there’s a lot riding on Friday’s December retail sales figures, the Tuesday 21 jobs figures and the Friday 24 flash PMI surveys of the UK's three main industries from IHS Markit.

However, Sterling ‘bears’ run the risk of seeing the Pound offered salvation by HM Treasury on Wednesday 29 January when the autumn forecast statement is released. That'll reveal updated government forecasts for the economy as well as providing markets with a sneak peak at the March budget that's expected to see the new government of Prime Minister Boris Johnson splash as much as £60 bn of cash in order to get the economy going again.

Pound Sterling will scrutinise the statement closely because any large stimulus might lessen the perceived need for BoE rate cuts.