- New Zealand Dollar to be moved by global risk trends

The GBP/NZD exchange rate is trading at around 1.8728, after rising about 0.75% so far at the start of the new trading week, and studies of the charts suggest mixed signals make a firm directional forecast too risky at this juncture.

The 4 hour chart - used to determine the short-term outlook, which includes the coming week or next 5 days - shows the pair having broken out of its descending channel and spiking higher, before falling back down. 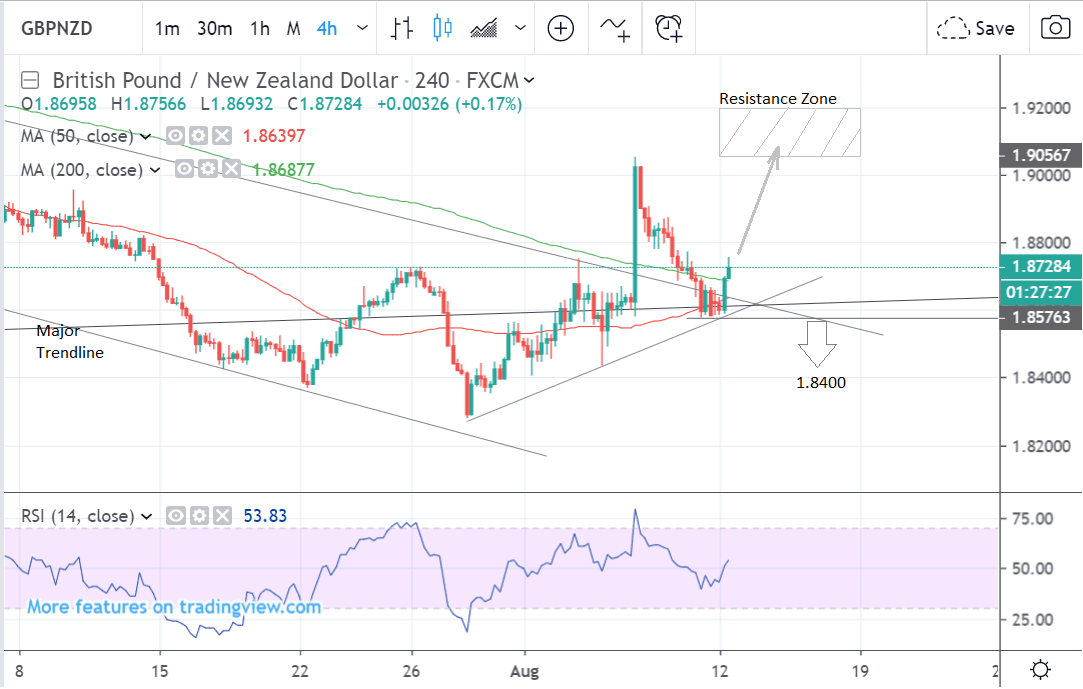 The volatile up and down nature of recent market action makes the short-term trend difficult to define.

A break below the 1.8570 lows would reaffirm the downtrend and suggest a probable continuation down to a target at 1.8400.

Meanwhile, there is also a possibility the pair could continue rising after the strong breakout move last week, but the tough resistance zone above the 1.9058 August 7 highs is likely to make further upside progress hard going.

The daily chart shows medium-term targets for either the break higher or lower. The pair also remains above the major trendline lending the chart a marginally bullish feel. 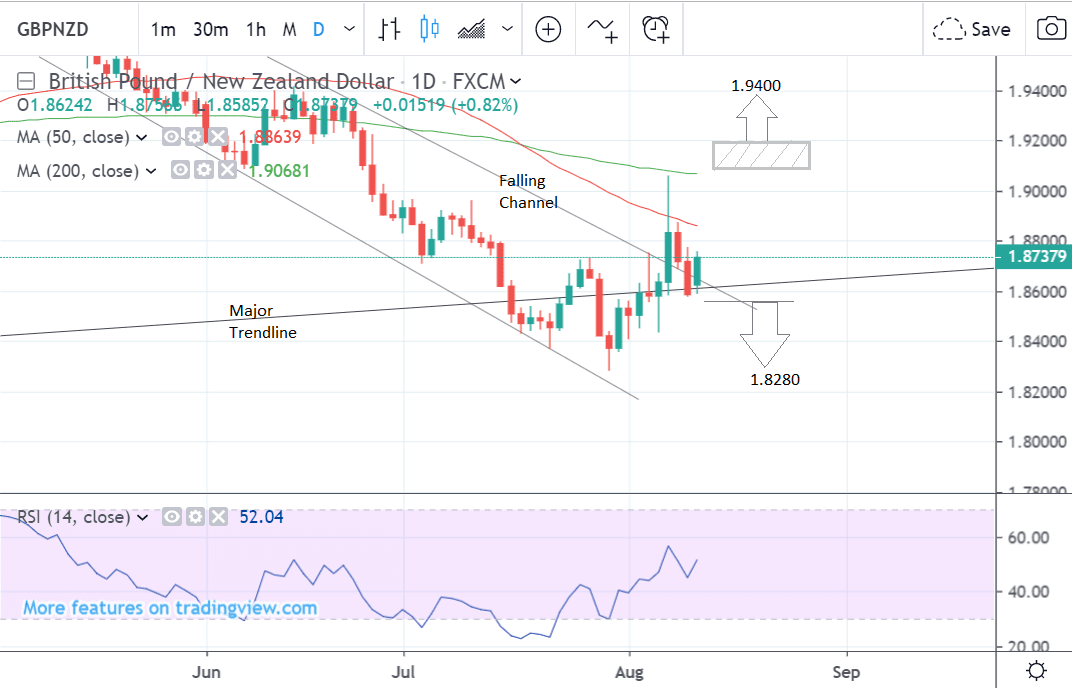 A clear break above the resistance zone and the 1.9200 level would indicate a continuation higher to a target at 1.9400.

Alternatively, a break lower would reinvigorate the bearish trend and lead to a possible move down to a target at 1.8280.

The weekly chart - used to give us an idea of the longer-term outlook, which includes the next few months - shows pair forming a bearish measured move pattern, which is incomplete and suggests an extension of the downtrend to a target based on the proportions of the pattern. 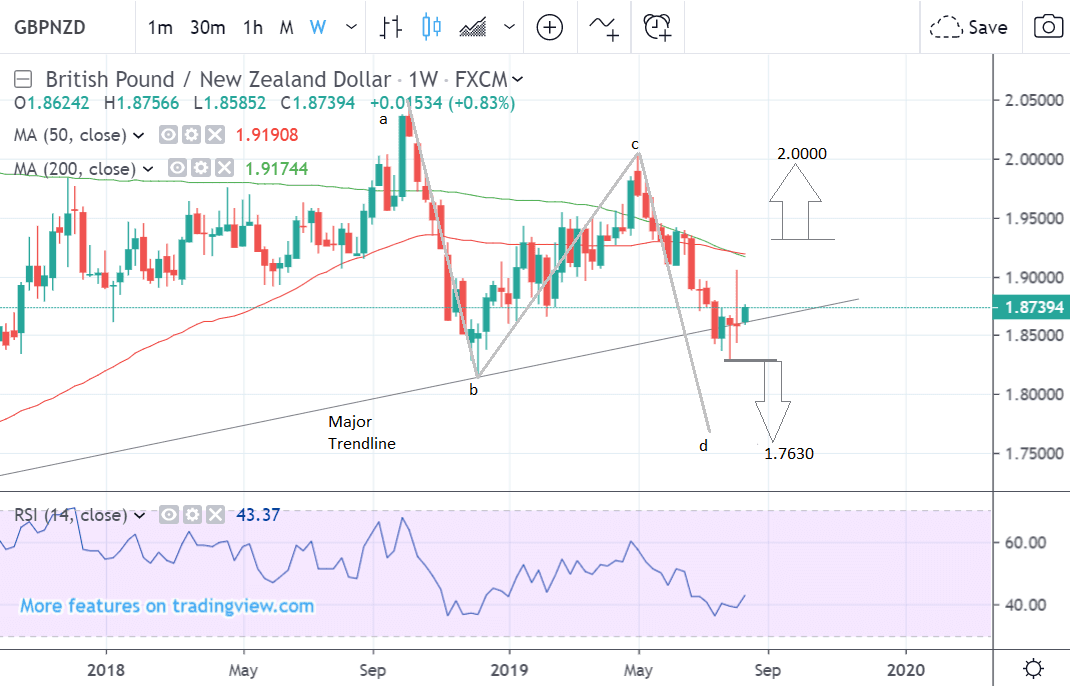 The length of the final c-d leg can usually be forecast using the length of a-b, and in this case, it suggests an end target of around 1.7630.

The upside target for the pair in the long-term, should it break higher, is at 2.000.

The main driver for the New Zealand Dollar in the week ahead is likely to be global investor risk appetite and the state of the Chinese economy with which it has deep trade ties. There is little in the way of domestic data which could move the market so the main factors will probably be external.

Chinese industrial production in July is forecast to have risen by 5.8% when it is released at 3.00 BST on Wednesday, which is a slowdown from the 6.3% in the previous month. If the result is even lower, however, it could lead to speculation the Chinese economy was suffering more acutely than previously thought, as a result of the trade war with the U.S. This would have a negative impact on the Kiwi.

Another source of volatility for the Kiwi could be comments from President Trump who could tweet something which might unsettle markets at any time.

Current trade negotiations between China and the U.S. are losing momentum: Trump’s most recent tweet suggested he could take or leave a trade deal with the Chinese after he said: “We’ll see whether or not we keep our meeting September…if we do, that’s fine. If we don’t, that’s fine”.

The Reserve Bank of New Zealand (RBNZ) is researching more extreme policies to help stimulate the economy, including negative interest rates and possibly ‘unconventional policies’ - which might suggest QE - according to a report from Bloomberg News.

The RBNZ might even cut rates as low as -0.35% or use large scale QE, both of which, should they materialise, would be extremely negative for the Kiwi.

The Kiwi fell steeply last week after the RBNZ announced the interest rate cut on Tuesday going from one pound buying 1.85 Kiwi Dollars to 1.90 in only a few minutes. Marinov sees further weakness on the horizon for the Kiwi, especially versus the Dollar.

“In my mind, the race to the bottom in rates is transforming a trade war into a currency war. It is the case that the central banks are the first line of defence. Really you have to give them credit for that, very preemptive very aggressive, RBNZ overnight, ECB not so long ago,” said Valentine Marinov, a currency strategist at Credit Agricole in response to the decision.

Cutting interest rates has a dual benefit for an economy undergoing hard times, it cheapens the cost of credit, and weakens the currency making the country’s exports more price-competitive. They do this by lowering foreign capital inflows from investors seeking somewhere lucrative to park their money. Some have said the ‘race to the bottom’ is actually turning into a ‘currency war’ of competitive devaluation.

“We have been bearish for a while. It still looks a bit overvalued relative to the Dollar according to our longer-term fair value measures, 0.63 is still a level we could hit (current level in USD/NZD is 0.6490),” says Marinov in an interview with Bloomberg News.

But there are also more general macroeconomic reasons to be sceptical about the Kiwi gaining anytime soon.

“It is also the case that among the currencies in the G10 space it is also one of the more vulnerable ones because it has a dovish central bank, exposure to China and exposure to the global business cycle. That’s not a currency you want to buy anytime,” says the strategist.