The Pound-to-New Zealand Dollar exchange rate is trading at around 1.8828 at the start of the new week, a marginal 0.3% lower compared to the week before. Studies of the charts suggest that the exchange rate is likely to continue declining over the next week.

The 4-hour chart shows the pair having pulled back in a three-wave corrective abc pattern after basing at the July 3 lows. 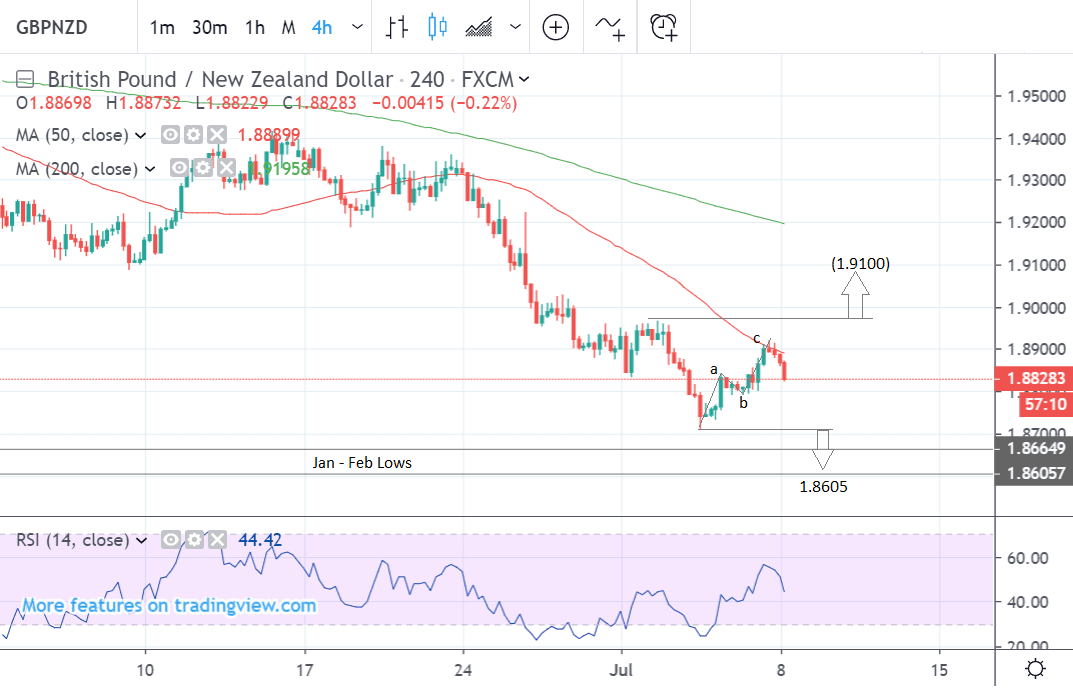 These ‘abc’ corrections are quite common and once complete they usually lead to a resumption of the downtrend.

This appears to be what is happening currently. The exchange rate is once again starting to fall, and a break below the July 3 lows at 1.8708 would probably provide confirmation of a continuation down to a target at Jan-Feb lows at around 1.8605.

The dominant downtrend remains intact but if the pair were to break above the 1.8967 highs this would suggest a possible reversal was underway, with an upside target at 1.9100.

The 4 hour chart is used to give us an indication of the short-term outlook which includes the next five trading days.

The daily chart shows how the pair is falling quite steeply in an established downtrend which is likely to continue over the medium-term - the time frame covered by the daily chart - which includes the next week to month ahead. 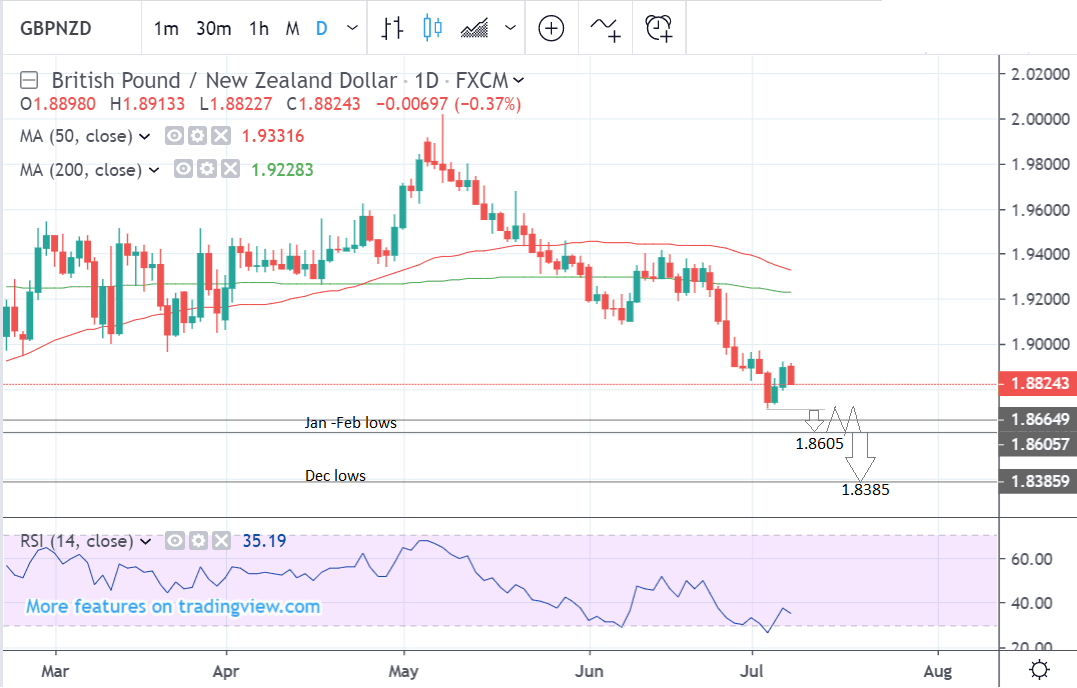 A break below the July 3 lows would provide the green light for more downside - initially to the Jan-Feb lows and then the December lows at 1.8385, possibly after some sideways range trading.

The weekly chart shows how the downtrend is likely to extend longer-term. 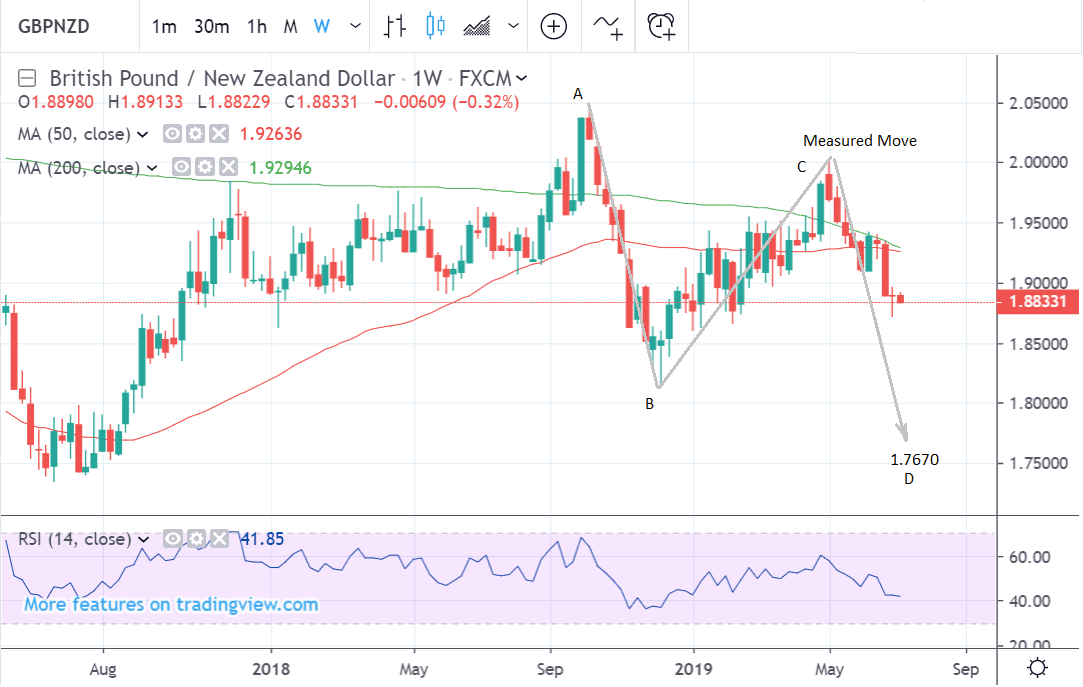 The pair appears to be forming a bearish measured move or ABCD pattern. This suggests an extension of the downtrend down to a target based on the proportions of the pattern.

The length of A-B can be used to forecast the length of C-D. In this case it suggests an end target for C-D of around 1.7670.

The main driver of the New Zealand Dollar will likely be global risk trends over coming days.

Investors sentiment had been riding high on the news that the U.S. labour market is holding up better-than-expected, following data on Friday.

However, the new week starts on a more sombre footing on news that Japan has introduced export controls on certain materials destined for South Korea and the manufacture of semiconductors.

Japan has tightened restrictions on the export of the high-tech materials to South Korea in connection with a dispute over compensation for forced wartime labour. The dispute first flared in October when South Korea’s Supreme Court ruled that Japan’s Nippon Steel must compensate South Koreans for forced labor during World War Two.

The dispute is probably more important to global trade trends would normally be the case owing to the hit to trade stemming from the ongoing U.S.-China tariff dispute.

Recently, the famous economist Nouriel Roubini sent out a clear warning that further disruptions of the technological global supply chain web could tip the world into a recession.

Any downturn in global investor sentiment could well weigh on the New Zealand Dollar which tends to appreciate when global markets are rising.

A possible further risk to global investor sentiment is geopolitical tensions around Iran, particularly after UK forces stopped an Iranian tanker in the straits of Gibraltar suspected of being destined for Syria which would be in contradiction to international trade sanctions.

The news that Iran has also now surpassed the 3.67% maximum Uranium enrichment limit set by the atomic energy organisation could also trigger repercussions or further sanctions from the international community with consequences for peace in the middle east and oil price stability.

Analysts will be scrutinising the data for signs the trade war is hitting Chinese trade and growth.

“Trade numbers out of China on Friday will come under the spotlight amid signs the world’s second-largest economy may require further stimulus to stave off a deep slowdown,” says a note from Wells Fargo. “Chinese exports unexpectedly rose by 1.1% year-on-year in May, though this was mostly due to the frontloading of shipments from the latest round of tariffs imposed by the United States. They are forecast to have declined by 2% y/y in June. A bigger drop would accentuate worries about the economy and add to calls for more policy easing.”

Such a drop would also weaken the Kiwi.

Domestically, a speech by Reserve Bank of New Zealand (RBNZ) governor Orr on Tuesday, could be a major domestic driver, if he mentions the outlook for monetary policy.

Currently, the RBNZ is expected to cut interest rates in the future to combat slowing growth both domestically and globally, however, if the governor is more upbeat about the outlook there is a chance the Kiwi could find support. Recent trade figures, for example, actually showed a rise in the New Zealand trade surplus in May and a healthy 29% increase in exports to China, which runs contrary to the doom and gloom portrayed by forecasters in light of the U.S.-Sino trade war.

Datawise, one of the main hard data releases is electronic card retail sales in June (month-on-month), which is forecast to show a 0.7% rise when it is released on Wednesday at 23.45 BST.

The NZ Business PMI survey is forecast to show a rise to 53.1 from 50.2 in June. PMIs are a leading indicator for the economy.