The EUR/USD exchange rate is at 1.1854 ahead of the weekend, placing it firmly in the middle of its August-September range. Richard Perry of Hantec Markets says the underlying messages coming through from the technical setup is one that remains supportive of the Euro.

The dollar strength in the wake of the Fed meeting did not seem to last even 24 hours, as a strong rebound on EUR/USD into the close last night has once more prevented a key breach of support.

Breaking the four month uptrend suggests that this is more of a consolidation range now. However, the reaction higher yesterday was telling. 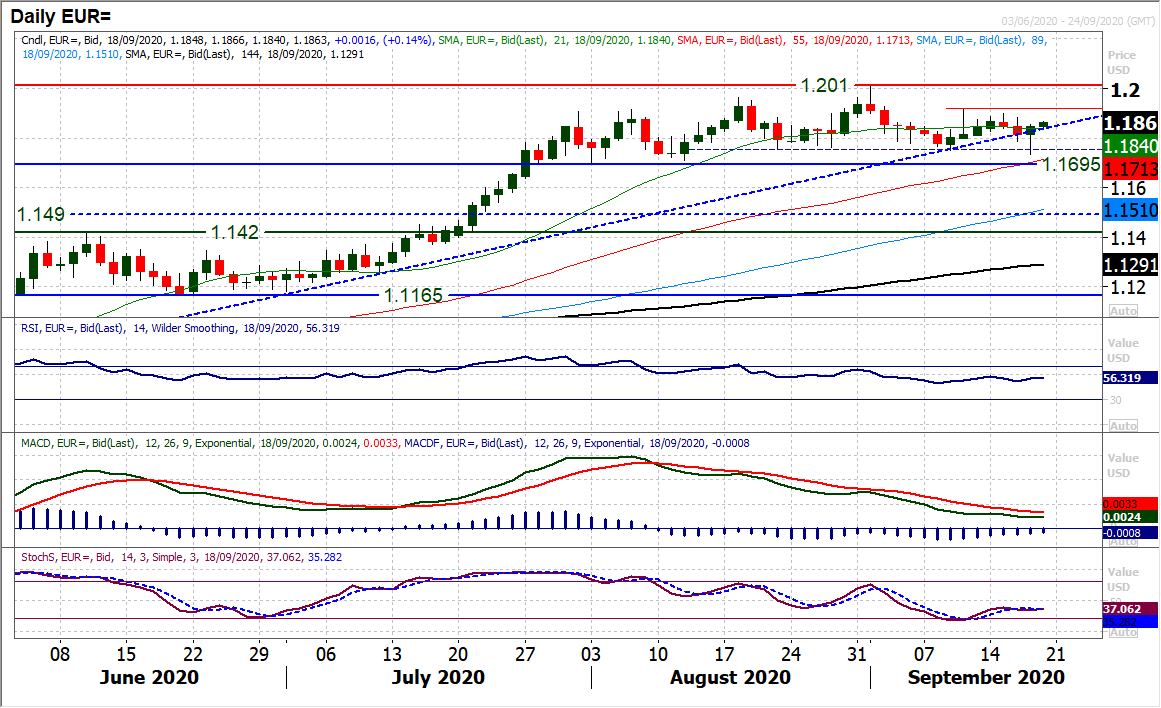 The dollar was threatening to go on a near term bull move (which would drag EUR/USD lower), but it was rejected around the key support band 1.1695/1.1750.

Rebounding from 1.1735 has once more left the outlook neutral.

Daily momentum indicators reflect this too. How the bulls react to resistance now between 1.1900/1.1920 will determine whether there is a renewed appetite to chase the market higher.

Yesterday’s candlestick was a “bull hammer” and implies a near term positive bias for the swing higher.

An early consolidation suggests that there is still come uncertainty over the move.

The US dollar rally in the wake of the FOMC meeting seems to already have run out of steam.

Lacklustre US data yesterday (jobless claims slightly higher than expected, along with housing data marginally missing) helped to drag the dollar back.

The Fed may have upwardly revised its 2020 growth forecasts but it is now very much on a looser for longer path of monetary policy.

It points towards near term dollar strength still being a chance to sell. It is interesting that the Dollar Index continues to see rallies flounder in the resistance band between 93.50/94.00.

Subsequently, having repelled a potential dollar rebound, forex major pairs are consolidating once more this morning.

This can also be extended to the precious metals, where gold and silver have also found a basis of support again. Equities have a tinge of negative bias after the tech sector once more pulled Wall Street lower, but selling pressure appears to be limited this morning.

There are some marginally constructive noises coming out from the White House (Larry Kudlow) over the prospect of US fiscal support and a $1.5TR package.

This may add a supportive element to risk today, but agreement remains some way off. UK retail sales for August have come in fairly close to expectations early today, with little real impact on sterling.