The EUR/USD exchange rate is trading a quarter of a percent higher at 1.1279 at the time of writing, with analyst and technical forecaster Richard Perry of Hantec Market says he favours buying into any weakness.

If one session could paint a picture of the medium term outlook, then yesterday could be it. An initial move lower, before swinging back decisively higher and just tailing off into the close.

A small positive candlestick body is the result, with long shadows higher and lower reflects a battle for control throughout the session, where both sides have had a go, but neither are strong enough to grasp control, yet. 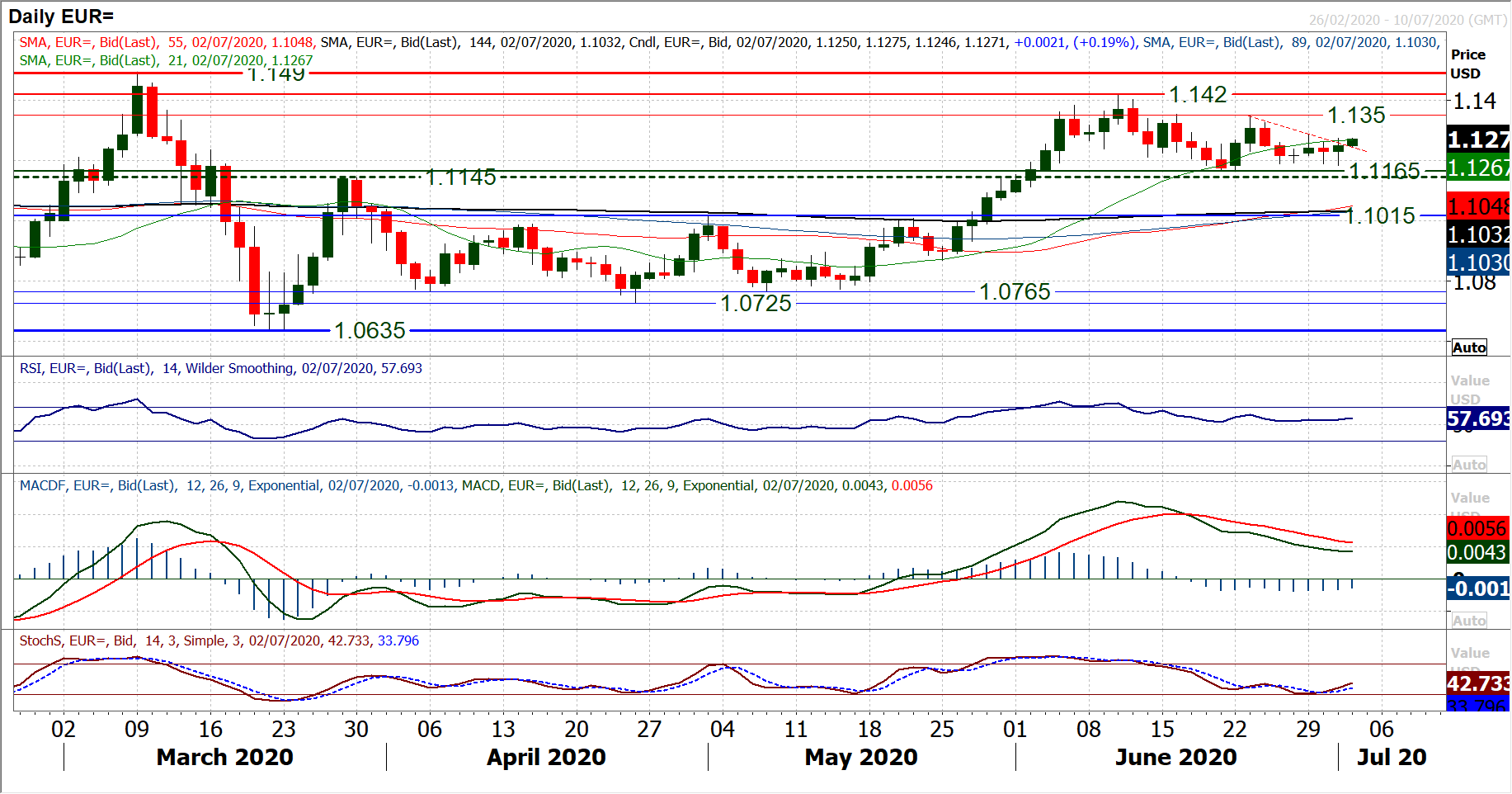 Yesterday’s candle has aborted what threatened to be a mild negative bias within what we see as a growing consolidation range above the key $1.1145 breakout. The consolidation support at $1.1165/$1.1190 has held another test and is clearly seen as an area worth defending for the bulls.

Near term weakness within this consolidation remains a chance to buy.

Momentum indicators beginning to turn back higher, as Stochastics starting to advance once more and more importantly, daily RSI continues to hold above 50.

Breaking a mini downtrend and tick higher early today leaves the pair almost bang in the middle of a 185 pip range between support at $1.1165 and resistance at $1.1350.

Ahead of Nonfarm Payrolls, the market sits in neutral configuration, but we remain buyers into weakness.

The past few sessions has begun to see a more constructive environment for risk emerging once more. The question is that after weeks of see-sawing sentiment, can this move be sustained?

There is still a drip feed of positive economic data for June which has helped to counter the concerns of rising COVID-19 infection rates for the US and rolling back of economy re-openings.

However, it will be interesting to see whether there is a tipping point back lower once more, and it will be in the July data that this may start to become an issue once more.

This edge towards risk improvement has been backed by the FOMC minutes last night, which talked favourably of yield curve control. An outcome based forward guidance (monitoring the level of inflation) was also on balance favoured. This lends a ongoing dovish bias to monetary policy from the Fed.

Treasury yields and the dollar are being weighed down in the wake of this, whilst equities are ticking positively.

Looking forward today, attention quickly turns to the Nonfarm Payrolls report, this month brought forward to Thursday, due to the Independence Day public holiday tomorrow. Payrolls are expected to show a record gain of +3 million jobs in June, which would beat the existing record of +2.5 million jobs added in May.

This remains a fraction of the 20.6 million jobs lost in April and it will be interesting to see what sort of reaction the market gives, considering the developments in more than 12 states of slowing or even reversing re-openings of their lockdowns.