The GBP/USD exchange rate is quoted at 1.2760, up 0.40% on the day at a new 3-month high. But with momentum still stretched, analyst and technical forecaster Richard Perry of Hantec Markets says the initial emergence of selling pressure yesterday is a caveat to the bull run.

An impressive intraday rally saved Cable from forming a key reversal signal yesterday and means that the bulls are still in control of the outlook.

A third consecutive close above $1.2645 validates the breakout, especially with intraday pullbacks seen in the past two sessions.

Cable has now formed nine positive closes in a row and another early breakout this morning opens the prospect that today could be the tenth. 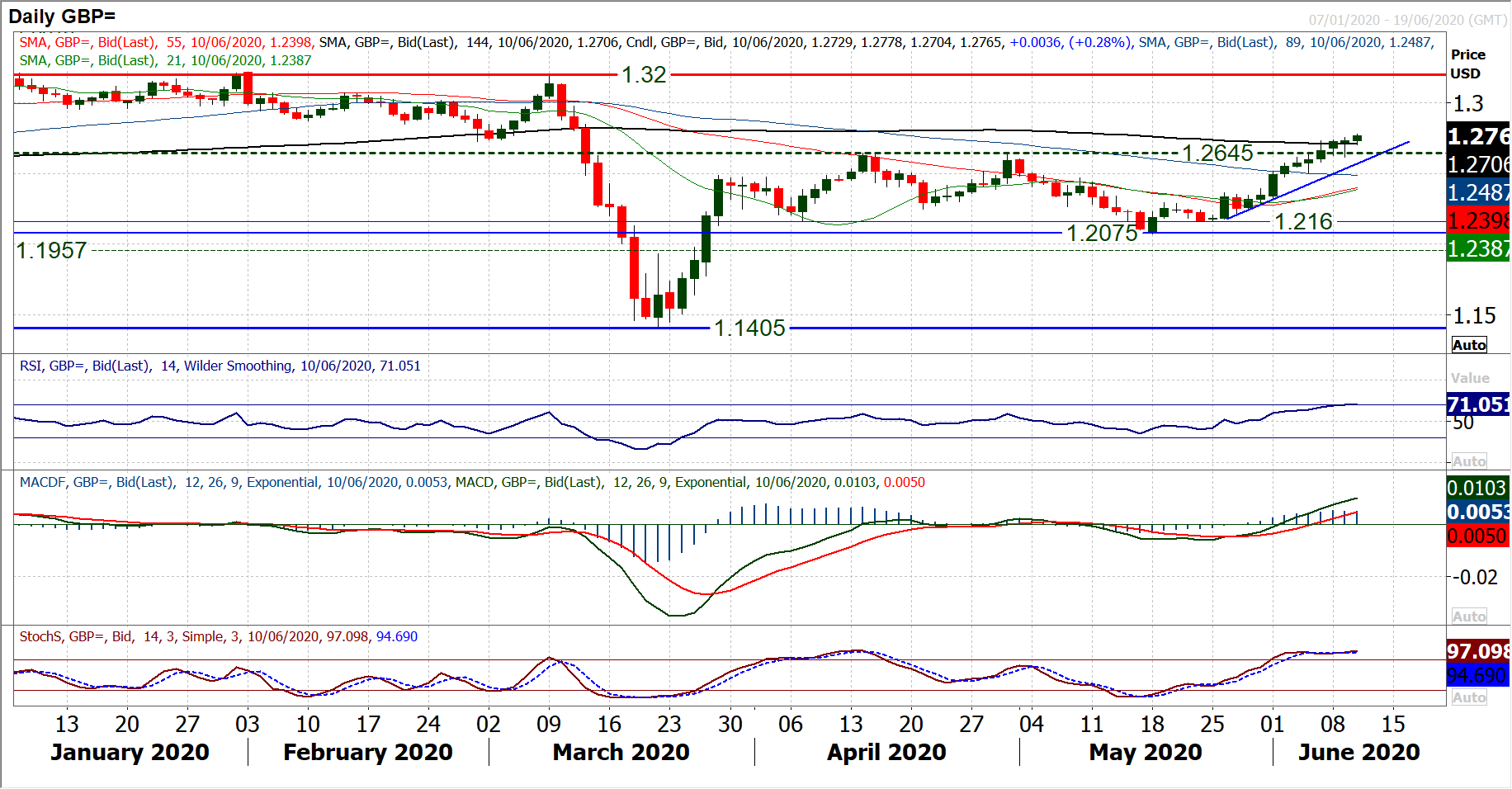 However, the bulls have had a warning.

With momentum still stretched, the initial emergence of selling pressure yesterday is a caveat to the bull run (even if it amounted to little by the close yesterday).

The daily RSI is ticking over 70 now and this comes with the candlestick bodies being relatively small.

We have been cautiously positive of this rally and have been on the lookout for corrective signals which have threatened but never confirmed. We stay with this rally, but remain cautious, especially with the Fed meeting today.

The prospect of some profit taking will still be tempting.

The hourly chart reflects a less positively configured momentum set up now (given the mild negative divergence on hourly MACD in recent days). The support at $1.2615/$1.2625 is increasingly important now.

A decisive breakout holding above $1.2755 this morning suggests a move towards $1.2875 could be the next upside target.

Dollar Pares Advance Ahead of the Fed's Update

There is a cautiously positive tone to markets this morning as traders look toward the Federal Reserve meeting later today.

A decline on Wall Street last night came amidst a session of risk reduction.

The US 10 year yield has reversed -14 bps since Friday’s high of 0.96% as traders try to figure out the reaction of the FOMC today.

The dollar has been flung around like a doll in a washing machine in recent sessions, and is weakening again this morning. If the Fed opts to remain cautious and maintain its extremely dovish position (perhaps even nodding to yield curve control) despite the positive read-through of the payrolls report, we could see the dollar continuing to weaken.

The Fed releases its latest set of economic projections today and forward guidance will be key. The risk rally has been built on the prospect that economies are re-opening but the massive support of easy monetary (and fiscal) policy continues.

If the Fed guides for this to continue open-ended, then the structural weakening of the dollar will continue and the risk rally will remain unencumbered to run ever higher.

With equity futures ticking higher, yields lower and the dollar also lower today, it seems that this is how markets are positioning.