The GBP/USD exchange rate is quoted at 1.2566 at the time of writing as Sterling's recovery extends. Richard Perry, analysts and technical forecaster at Hantec Markets, gives his latest analysis for the pair.

We have recently been concerned by the lack of real traction on GBP/USD, given the underperformance of the dollar across the major pairs.

However, GBP/USD took a big leap forward in recovery yesterday as it posted a strong bull candlestick to close above resistance a t$1.2465.

The momentum of this recovery within what is a trading range between $1.2075/$1.2645 is now such that the bulls will be eyeing the range highs once more.

Impressively, momentum is with the traction of the move, as RSI is now this morning above 60 and is its highest since early March.

It suggests that pressure towards $1.2645 is building. 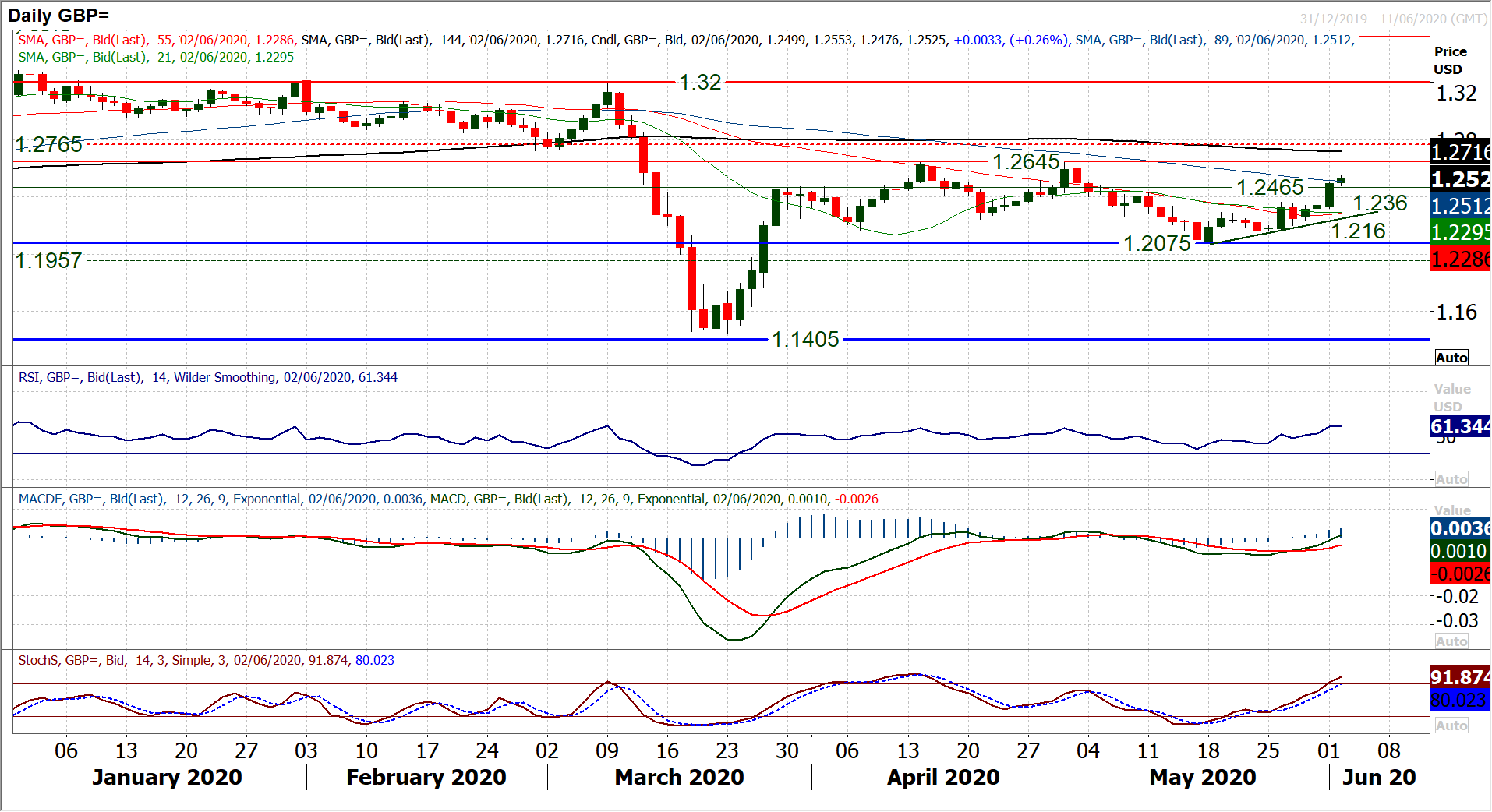 However, we would still view this run with caution and given the price moves on Cable since late March, this is a move that could be close to maturity. All of these swings higher and lower over the past nine weeks have been one to two weeks in duration, before a retracement has set in.

Markets: Threat of Renewed Trade War Simmers in the Background

The dollar weakness that has been such a feature of trading over the past week or so has begun to just slow down slightly this morning.

As Treasury yields tick slightly lower, this could be a function of a near term waning of the positive risk appetite that has driven equity markets to breakout of the medium term ranges. It comes as a tinge of caution is beginning to leak into sentiment.

Although the US did not come down too hard on China over the security bill for Hong Kong, there are hints of something bubbling under the surface.

According to media reports, China is ordering state authorities to scale back purchases of US soy beans. This would potentially restrict the ability of China to meet its obligations under the Phase One trade agreement and could induce a response from President Trump.

Is the tariff war about to re-emerge as a risk that needs to be priced in again? It comes also as major cities in the US continue to see riots and protests which are hampering the ability for a re-emergence from the period of lockdown.

Equity markets have thus far seemed to be fairly resistant to these factors (stoked by massive monetary and fiscal support and newsflow of economies re-opening around the world).

However, if riots continue and a belligerent President Trump fails to diffuse the situation, it could begin to feed negatively into sentiment.

There are hints of this coming this morning. Away from the US, the UK/EU trade negotiations resume today and sterling is benefitting from reports of potential compromise.

The talks are into a critical month ahead of a deadline to extend the transition period. The Reserve Bank of Australia came as little surprise as it held rates on hold at +0.25% and maintained its 3 year bond yield target at +0.25%.