The GBP/USD exchange rate trades at 1.2172 as the week's gains for Sterling are halved in the final session of the week. Richard Perry, an analyst and technical forecast at Hantec Markets says the pair is rolling over once more.

The GBP/USD rebound of earlier this week has run out of steam and the market is once more returning to its bearish path lower.

A couple of negative closes in the past two sessions and the (slightly re-aligned) downtrend continues to drag GBP/USD lower.

The recovery that had hinted on momentum indicators earlier this week is rolling over. 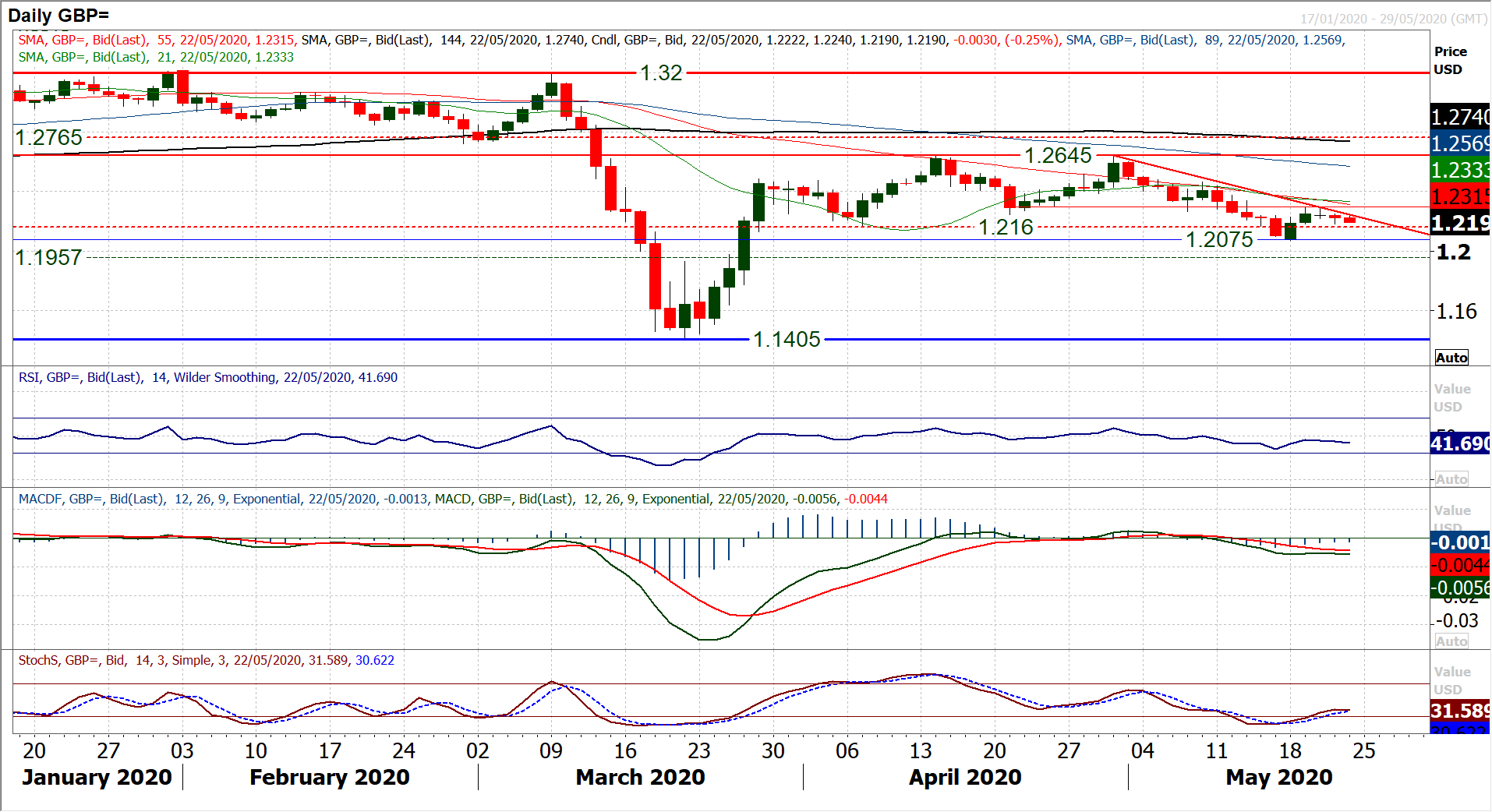 RSI is faltering in the mid-40s, whilst Stochastics are losing their way again and MACD lines have never even got going.

This morning’s UK retail sales and higher than expected government borrowing will certainly not help a sterling recovery and we continue to sell Cable into near term strength.

The supply of willing sellers in the resistance around the old April/May lows between $1.2160/$1.2265 still seems to be restrictive for Cable longs.

A renewed close below $1.2160 would be the next trigger point for selling pressure, and we expect a test of $1.2075 in due course.

Hourly indicators show a growing negative configuration taking hold on momentum (as hourly MACD lines have just rolled over again under neutral). We look to use rallies as a chance to sell.

U.S. Dollar Back in Demand as Geopolitical Tensions Rise

At a time where markets are trying to build the momentum to take the next step forward in this recovery, growing geopolitical risk between the US and China is not ideal.

We are increasingly seeing the threat of renewing tensions between the world’s two most powerful economies.

Moves in the US Congress to sanction China over potential Hong Kong legislation adds to tensions that are already fraying after President Trump has been firing off over the COVID-19 blame game and interference into his re-election campaign.

Risk aversion is taking hold once more through markets (certainly not helped either by China reluctant to issue a 2020 GDP target). US Treasury yields are again heading lower, and the dollar gaining ground.

This renewed swing lower has come just as several key markets had been testing resistance of a risk recovery.

Wall Street indices are pulling back, EUR/USD is backing away from $1.1000 again, whilst Brent Crude oil is falling under its April highs.

How the bulls respond in these markets in the coming days could determine whether the multi-week ranges are set to continue to leave the risk recovery on ice.

In other news overnight, the Bank of Japan held an unscheduled meeting and kept policy unchanged with -0.1% rates and a 10 year yield target of zero.