The British Pound is seen outperforming the majority of its rivals as an highly-anticipated set of employment and wage data underpinned the view the UK's labour market remains robust and will likely continue delivering higher pay rates, despite the economy suffered a slowdown at the start of 2018.

The Pound appears to have edged higher on the news with the Pound-to-Euro exchange rate quoted at  to 1.1378 at the time of this article's update, having been at 1.1342 just ahead of the release. The Pound-to-Dollar exchange rate is quoted at 1.3479 at the of updating, having been as high as 1.3572. We note a sizeable rally right across the board in the Dollar at present, so we would certainly say in this particular instance the Dollar is in charge.

The data suggests employment dynamics continue to head in a direction consistent with Bank of England expectations, which in turn keeps alive the prospect of an interest rate rise being delivered in August. "We still believe that the BoE will deliver a rate hike in August, and a string of strong data should help to bring markets around to that view as well," says Jacqui Douglas with TD Securities.

Firming of such expectations over coming months will be required to help boost Sterling back towards 2018 highs and come just days after the Bank opted to keep rates unchanged.

Importantly, the wage data, when contrasted to UK inflation numbers, confirms UK workers are now seeing a real increase in pay, which bodes well for the economy going forward which had been suffering a slowdown in the first three months of the year.

The data suggests this slowdown might be temporary, which will likely provide fundamental underpinnings for Sterling.

With #FX markets back to data watching... #EURGBP is one cross thats been taking its cue from relative data outcomes. Next directional impulse will come from which of two economies bounces back the quickest from their respective 1Q soft patches pic.twitter.com/DHjQlvWvgR

The rate of unemployment, which has been trending lower for some time, has now reached its lowest level for over 40 years, and the resulting 'tightness' in the UK labour market should theoretically impact on wages, pushing them up as a scarcity of skilled workers results in a higher premium being put on their services.

"March’s labour market figures provide us with optimism that sustained rises in real pay are in prospect and will place more pressure on the MPC to hike interest rates soon. Indeed, employment rose by a whopping 197,000 in the three months to March, well above the consensus expectations of a 130,000 rise and the biggest quarterly rise since the end of 2015," says Ruth Gregory, UK Economist with Capital Economics.

Analysts are also confident that UK wages will maintain an upward trend and converge with Bank of England expectations for an eventual move above the 3% marker.

"We suspect that pay growth will track slowly higher over the remainder of the year whilst productivity growth is likely to remain lacklustre as it has in recent years. As such, and today’s pay growth figures reinforce this view, we expect to see the Bank of England raise rates by 25bps in August. Of course, that is provided we also see something of a recovery in Q2 economic activity data too," says Victoria Clark, an economist with Investec in London.

UK Unemployment Falls Below Key Threshold, and this is Good for the Pound

The Pound could gain an important boost from the effect of a continued fall in unemployment, says Andreas Steno Larsen, a strategist at Nordea Bank, who offers some much-needed cheer-leading for the under-fire Pound in a recent note.

Sterling took such a drubbing last week after the Bank Of England disappointed markets at their meeting by not raising interest rates, citing softer-than-anticipated economic conditions.

But Larsen points out that the unemployment rate in the UK is actually now below a key level known as NAIRU by economists, which is short for the Non-Accelerating Inflation Rate of Unemployment, and this could be flashing positive green lights for Sterling bulls. 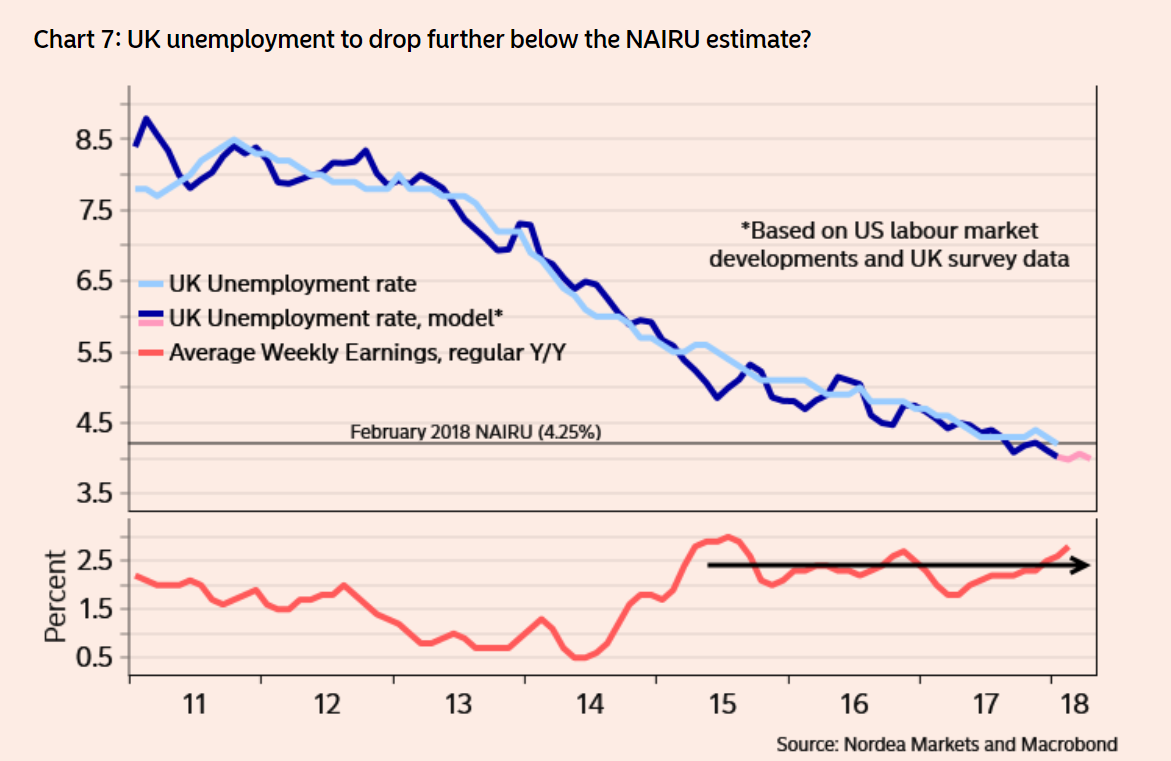 The theory behind NAIRU is that if unemployment falls below a certain level it pushes up wages as per our explanation above re scarcity of skills, and this pushes up inflation.

Higher inflation leads to the central bank having to put up interest rates, and higher interest rates appreciate the local currency by attracting greater inflows of foreign capital, which are drawn by the promise of higher returns.